Background – Peacocks Tea Room is situated next to the river in Ely, next to a bridge crossing to the marina. It is in a pretty white cottage with parking nearby. There are two rooms inside, both crowded with tables and chairs. It has a really homely feel to the place and the staff are friendly. It is also really popular, especially at weekends. However, there is generally no need to book for afternoon tea.

Contents – 4 triangular sandwiches (smoked salmon, ham and pickle, cheese and tomato chutney, egg and cress), 2 medium fruit scones, your choice of strawberry or raspberry jam (we chose raspberry), clotted cream, large slice of your choice of cakes from the menu (approx. 6 options. We chose lemon cake and carrot cake), a large pot of tea for two of your choice from a huge menu of teas (we chose English Breakfast). 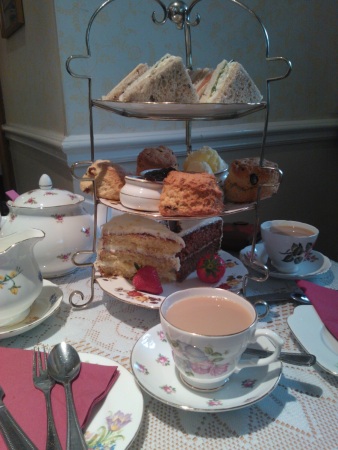 The sandwiches were well filled and clearly freshly made. It was nice to see ham and pickle rather than mustard and also cheese and chutney.

The fruit scones were of a medium size and fresh. There were two each which we liked! There was plenty of jam and clotted cream, with a choice of two jam flavours offered.

The cake option in this afternoon tea was a large slice of homemade cake. There were several choices of cake to choose from. The cakes we were served were both light and tasty. A strawberry each was included on the layer with the cake.

Tea was loose leaf in an infuser within the tea pot. There was a large choice of teas to choose from.