Background – The Dales Country Hotel is one of a chain of three hotels situated in North Norfolk. It can be found in Upper Sheringham which is inland and up a hill from the better known Sheringham town.

The hotel is in pretty surroundings with attractive gardens. Inside it is very traditional with several rooms available for tea. There is a restaurant, small bar, a library and a terrace.

Comments – There were four of us in our party on this occasion. We chose to eat our Afternoon Tea in the bar area. We were first of all brought two teapots for three of us plus a pot of hot water. The rest of the tea then arrived on an attractive black three tier cake stand with white plates.

The sandwiches were all fresh and adequately filled. We were pleased to see cheese with pickle as one of the sandwiches. We asked for, and received ham without mustard. The sandwich layer was decorated with some water cress. 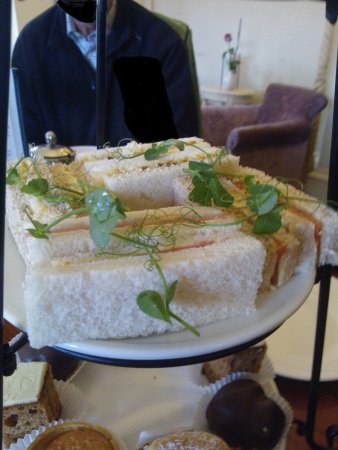 The scone was good. It was tall enough to cut into three layers! The jam was only reasonable tasting but there was enough of it, however there was barely enough clotted cream.

The cakes were very tasty. I particularly enjoyed the lemon Bakewell which was very light. The profiterole was rather on the small side. The carrot cake was good and moist but the chocolate chip cookie was small and had an overriding taste of baking powder.

The hot water that was brought with the teapots was not hot enough to use by the time we needed it. In the end we had a new pot of tea brought out for us. If anything, the tea was a little on the weak side. There was no choice of type of tea. The tea was made with tea bags.