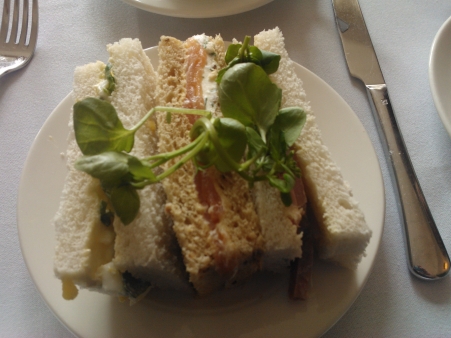 Background – The Bedford Lodge Hotel is a large, luxurious hotel situated not far from the centre of Newmarket. It caters largely for the racing crowd. There is a large outdoor area with tables and chairs plus comfortable inside areas for eating. There is a comfortable bar area with a couple of relaxing areas off the main bar, in which to enjoy your Afternoon Tea.

Contents – 3 finger sandwiches (smoked salmon and cream cheese, ham, egg and cress), a good sized fruit scone and plain scone, a pot of strawberry jam, a pot of lemon curd and a pot with an ice cream scoop of clotted cream, a macaroon, two small meringues put together with chocolate ganache between, a small piece of coffee and walnut sandwich, a small piece of carrot cake, a small piece of lemon drizzle cake and a small raspberry and cream dessert with a chocolate spoon. The tea was made with teabags in a large teapot and was refillable. There was a choice of teas.

Comments – We had pre-booked our Afternoon Teas so a low table and comfortable chairs were reserved for us in one of the areas just off the main bar area. First of all we were served our tea in a large teapot.

The Afternoon Tea was then served in three parts, each arriving separately when the previous part had been finished.

First we had two plates each with three sandwiches on each, served on a three tier cake stand with small round white plates. The third tier of the stand was left empty.

The sandwiches were of a good size, fresh and were well filled. The ham was particularly tasty.

We were next served with the scones. Two on each plate plus a third plate containing the jam, lemon curd and cream. This was again on the three tier cake stand. There was plenty of both jam and lemon curd. I spread the lemon curd on the plain scone and had jam and cream on the fruit scone. This meant there was enough cream for both of us which there would not be if we had tried to put cream on both scones. The lemon curd was delicious and I was able to finish it with a teaspoon like a lemon posset. The scones were fresh, a good size and very tasty.

Finally we were served with a cold glass plate containing the cakes and a small dessert. The cake pieces were  all very small. The coffee and walnut was a little dry and the lemon seemed to lack flavour but the carrot cake was moist and tasty. The macaroon was odd but tasted better than it smelt!! The meringue was nice. The little dessert was very nice but needed a little more raspberry as a layer of biscuit made it a little dry to eat.

The tea arrived at the right strength and was refilled on request. There was a wide choice of teas available but they were not traditional teas except for English breakfast or Earl Grey. The rest were green teas, fruit teas, flowery teas, etc..

Service was a little slow but was pleasant. The surroundings were very comfortable.