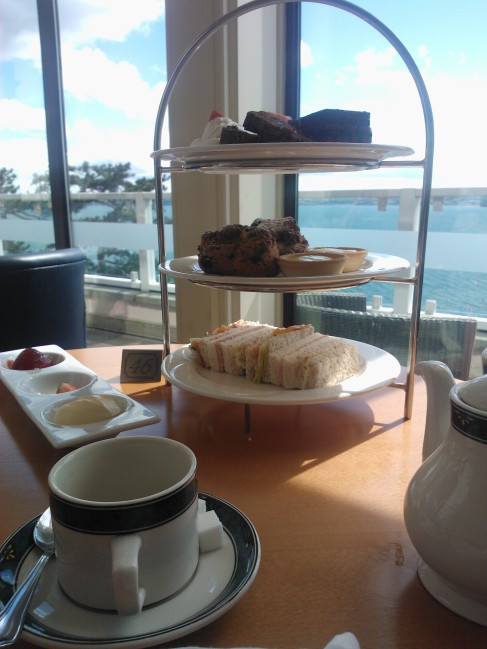 Background – We were staying in Torquay for the weekend to celebrate a big wedding anniversary. We had chosen to stay at The Imperial Hotel which occupies a stunning position overlooking the bay. It is a lovely grand old hotel that is an interesting place to stay.

Afternoon tea can be taken in the bar area or in the lounge. The lounge is large and comfortable but the bar area has views over the bay in an extension to the side.

Contents – 3 finger sandwiches (egg mayonnaise, ham, smoked salmon), a good sized fruit scone,  a separate plate containing a blob of clotted cream and a blob of strawberry jam, a piece of fruit cake, a chocolate Opera sponge cake, a cream filled meringue and a lemon tartlet. The tea was made with bags in an individual china teapot.

Comments – We were served in the bar area overlooking a fabulous view of Torbay. The tea was brought out first in individual teapots. The afternoon tea, which followed soon after, was served on a plain three tier cake stand with round white plates.

We had asked for the ham and mustard sandwiches to made without mustard. When they arrived, the sandwiches were well filled and had been made to our requirements.

The scone was large but was slightly overcooked. The portions of both jam and clotted cream were barely adequate. 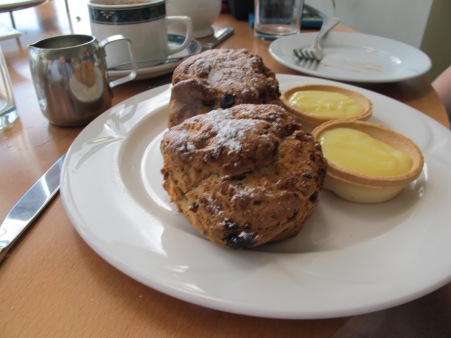 The cakes were a reasonable size and light and tasty. All of the items tasted fresh. We both thought that the lemon tartlet was particularly good.

The teapot contained enough tea for three cups of tea. It arrived at the right strength for us but was getting very strong and cold by the third cup. We asked for and received a refill of tea without charge. The tea was made with tea bags. We also had an extra cold drink each as well due to the warmth of the day.

Service was reasonably good and the view from the room was amazing.