Background – The Riverside House Hotel in Mildenhall is an attractive hotel easily accessible from the High Street. It has an attractive garden to the rear which stretches down to the small river beyond. The restaurant has views out onto the garden. There is also a terrace outside for warmer days/

Comments – We were given a choice of where to eat; in the restaurant or out on the garden terrace. It was sunny so we decided to sit in the garden.

The tea was served first in a large white teapot but was quickly followed by the arrival of the rest of the Afternoon Tea. Most of the Tea was served on a three tier spindle type cake stand with round white plates. The large slices of cake were served on a separate rectangular white plate.

The sandwiches were all adequately filled, fresh and tasty. We had asked for no horseradish or mustard and this was what we received. The bread was mixed brown and white. The sausage rolls and tartlet were homemade, warm and delicious. A lovely addition to the afternoon tea. 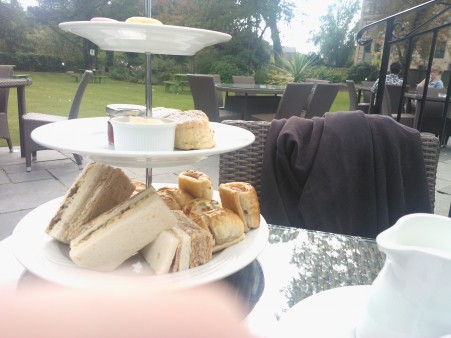 The scones were small but were tasty and fresh. There was just enough clotted cream but the one tiny pot of jam was not really enough for two scones.

The slices of cake were large, fresh and delicious. We really enjoyed both cakes. I must admit I like a tea served with slices of homemade cake.

The macaroons were mass produced and added nothing to the tea. We felt they had been added simply to fill the top layer of the stand as the cake was on a different plate.

The tea was made with teabags and we were offered a refill but we had to go and find someone to get it. The tea did get cold rather quickly as we were outside. Service was reasonably attentive.