Background – Having booked our wonderful (and expensive!) Afternoon Tea at The Langham for Saturday we wanted something different for Sunday. My son had been intending to try this tea on a trip to London a few weeks previously but had run out of time. However he had told us about the idea and we thought it would be something different to contrast with the traditional tea we had booked for the Saturday. I looked it up online and made a booking for the Sunday afternoon.

Contents – 3 small burgers (sliders) – one beef, one chicken and one salmon and shrimp. Plus a small portion of skinny chips. A mini vanilla milkshake, a finger of chocolate brownie and a small lemon tart. We were also served a strawberry Bellini (I was able to replace this with an alternative drink from the menu as I don’t like alcohol) and a glass of iced tea.

Comments – We were served in the seating area of this small café which is just off Oxford Street. The manager first came and told us what we would be served. He offered us a strawberry Bellini to start our tea. As I don’t drink I was offered a choice of any drink from the menu. I chose homemade lemonade which was beautifully refreshing. Just what I needed on a hot muggy day walking around the sights of London. My husband enjoyed the full sized strawberry Bellini.

The waiter then brought out a metal tray each containing our Afternoon Teas. He also brought us each a glass of iced tea.

The sweet part of the Afternoon Tea was on a separate smaller metal tray within the larger one.

The burgers were really good. They were of the right size to manage to eat three and were contained in buns cut to fit the burgers size. All three were delicious but my favourite was probably the traditional beef. The chips were seasoned and placed in a metal cup. There was just enough to go with the three burgers though my husband ran out of his too quickly!

The vanilla milkshake was good. It was like drinking melted ice cream. The chocolate brownie was moist and very tasty. It would have been really nice to have had a bit more of it as we were only given a finger each. The tartlet was really tangy – just how I like it. The pastry was crisp and the whole tartlet was of a reasonable size (about 3-4 ins across). 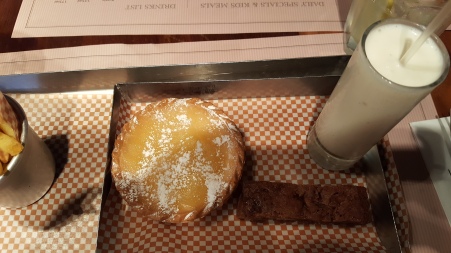 Service was attentive and friendly with helpful, friendly waiting staff.

I thought this Afternoon Tea was a brilliant concept and a really original version of an Afternoon Tea. It didn’t disappoint.