Background – As I have mentioned before, we often visit the North Norfolk coast, either for days out or for a short stay. In preparation for these trips I have trawled the net and created a list of places that do Afternoon Teas for us to try out. Most of them need to be booked in advance so are no good for a spur of the moment trip. Thornham Deli is one that does not need to be booked in advance. In fact, they don’t take bookings at all. So, on a spur of the moment trip to Hunstanton (our nearest bit of coast), we decided to try it out.

Thornham Deli is on the edge of the village of Thornham, not far from Hunstanton. There is a large Delicatessen which also sells gifts and souvenirs, plus a café area with a small conservatory on the back. There is also an outdoor area where you can be served food as well. There is a good varied menu of freshly prepared, delicious food, including Afternoon Teas served any time.

Contents (each) – 2 large half Bloomer sandwiches of your choice from the selection in the menu (we chose Coronation Chicken and Egg Mayonnaise), a few crisps, 1 large fruit scone, a small pot of strawberry jam and a small pot of clotted cream. A small macaroon, some small pieces of Biscotti, a triangle of Bakewell tart, a triangle of chocolate brownie and a triangle of rocky road. The tea was loose leaf.

Comments – We were sat in the conservatory area by a window. The tea arrived quickly in individual teapots with loose leaf tea enclosed in a cage. The tea was rather strong for us. We managed to get three cups from each pot. We were not offered a refill but we also didn’t ask for one.

The afternoon tea arrived well laid out on a large wooden bread board.  The sandwiches were of a substantial size, although there were only two each. The bread was freshly made on the premises and was tasty and there was plenty of filling. It was really nice to have some crisps included. 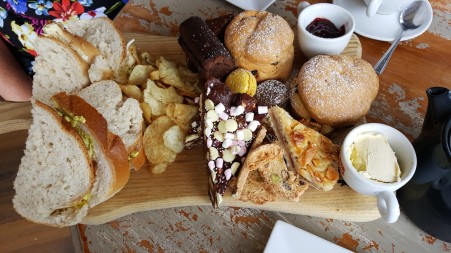 The scones were large and warm. They were freshly made and tasty. However, there was nowhere near enough jam or cream. In fact there was barely enough for one scone let alone two. We later spotted someone with an afternoon tea for one which had the same amount of jam and cream as we were served so we did wonder if it had been a mistake. We did not ask for further supplies on this occasion.

The cakes were absolutely delicious. Some of the best we have been served! They were all freshly made and of a good size. The chocolate brownie was yummy. Very rich and moist, it was almost like a chocolate fondant. My personal favourite was the rocky road which was very chocolatey and was really good. In fact we bought another slice in the Deli next door to take home with us!

Service was quite quick but once we had been served we did not see any staff until we had finished.

We have revisited Thornham Deli several times since our original visit. Each time the Afternoon Tea has been slightly different but it has always been to the same high standard that we found on our first time. On returning we have always been given a small cup of jam and clotted cream per person so it appears I was correct in believing a mistake had been made on our first visit. This would have increased the score I gave originally by 0.5 on both jam and cream giving the Deli a score of 17.0 in total.