Background – Slepe Hall has been chosen by my eldest son and his fiancée as the venue for their future wedding so when we saw they were offering a Festive Afternoon Tea it seemed like a great opportunity for the four of us to try it out.

The hotel is not far from the centre of St Ives in Cambridgeshire. St Ives is an attractive market town on the river Great Ouse. The hotel is a small independently run hotel set back from the road. It has an outside area as well as the usual bar and restaurant inside. 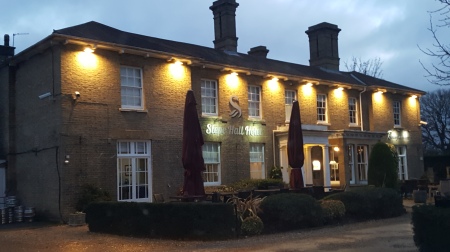 Contents – 4 finger sandwiches each (cucumber, smoked salmon, ham and tomato and turkey and stuffing). A large fruit scone, butter, a pot of strawberry jam and a pot of clotted cream. A meringue Christmas tree, a gingerbread star, a mini mince pie, a mini tarte au citron with cream on top and a small triangle of millionaire’s shortbread. The tea was made with tea bags from a choice of types.

Comments – We had reserved a table in advance some time ahead. Despite this we were left waiting in the bar to be called through for some time when we arrived. There were four of us on this occasion.

When we were finally shown to our table, it was in the busy restaurant area. The table was nicely set with crackers waiting for us. We opened these and wore the hats during the Tea!

The tea arrived first in a large white china teapot for three of us. The fourth person had a glass of Coke instead of tea. The rest of the Afternoon Tea then arrived on two three-tier spindle type cake stands with round white plates (each containing Tea for two people).

There was a mix of both brown and white bread for the sandwiches. There was adequate amounts of filling and the bread was fresh. My favourite was the turkey and stuffing. A good seasonal filling for a festive Tea.

The scone was warm, fresh and quite big. There was enough of the jam which was tasty with strawberry bits in it. There was also enough clotted cream. Butter was available on the table but none of us used it.

The cakes were all good. I really liked the good attempt at festive cakes. The meringue Christmas tree, which was green and had decorations on, was particularly imaginative. The gingerbread star had a pretty decorated top. Lemon tart (tarte au citron) and millionaire’s shortbread are always winners in my eyes and it was great to see both here. Both were good but, obviously, they could always be bigger!! The mince pie was fine but a bit small which means you get a lot of pastry and not much filling.

The tea was of a good strength. We were offered a refill which we took.

The service was reasonably good but the room was busy so it took a while to get attention.