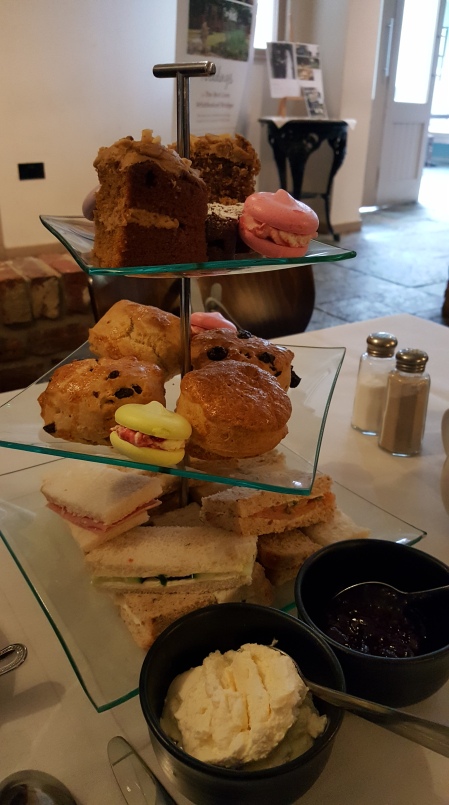 Background – I was pleased to find this Afternoon Tea venue as it is reasonably near to home and was a venue we had never visited. The website looked promising and the menu was good. However, on this occasion, whilst it was by no means a bad Tea, it didn’t live up to expectations.

The building is a lovely old coaching inn just off the A505.

There are several areas for eating but we had a reserved table which was laid ready for us just off the main bar area. 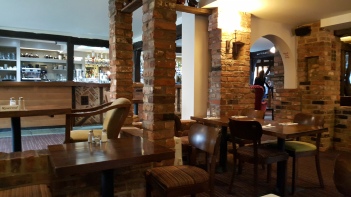 Other available areas for eating included the Atrium and an area further away from the bar.

Next door to The Red Lion in Duxford Chapel. This is a fourteenth century chapel looked after by English Heritage, which is free to enter and to have a look at. 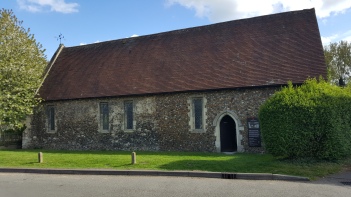 Contents – six finger sandwiches each (three of each between two of ham, egg mayonnaise, cream cheese and cucumber and smoked salmon). A medium sized plain scone, a medium sized fruit scone, a bowl of strawberry jam, and a bowl of whipped cream. Two assorted macaroons, two small bits of chocolate brownie and a small slice of coffee and walnut sponge cake. The tea was made with tea bags in individual china teapots.

Comments – We were seated in the main bar area at a table reserved for us. The table was laid ready for us with a tablecloth and brown china with a linen napkin. 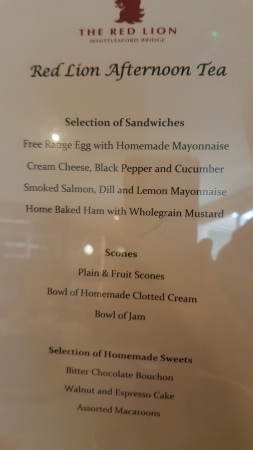 We asked for the ham to be provided without the mustard, which is what we received. However, the ‘home baked’ ham was straight from a packet (it even had square corners!). There was no noticeable pepper with the cream cheese and no noticeable dill and lemon mayonnaise with the smoked salmon. The egg mayonnaise was fine. All of the sandwiches were ok, they just weren’t what the menu on the table beside them said they were!

The sandwiches were reasonably well filled. They had clearly been made in advance as they were quite cold and the bread was a little dry in places There was a mix of both brown and white breads.

The scones were reasonably fresh and homemade. They were both a good size and tasty. There was just about the right amount of jam but not really enough cream as it was whipped not ‘homemade clotted cream’ as was stated on the menu.

The cakes were all homemade fresh and tasty. The macaroons were flavoursome with a nice amount of almond taste. They had been freshly filled with a small amount of jam and cream. I’m not usually a fan of macaroons but these were good. The mini chocolate brownie blobs were very tasty. They were rich and gooey. Very nice! The coffee and walnut sponge cake was also very good.

The tea was of a good strength for us. We were offered refills and had one pot refilled once. We also bought a large glass of cola.

Service was quick and reasonably efficient.