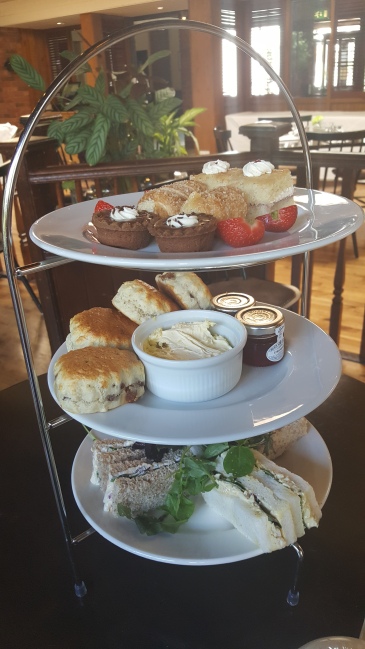 Background – The Barns Hotel is situated just on the edge of Bedford next to the River Great Ouse. The buildings are pretty with the newer buildings having been designed to 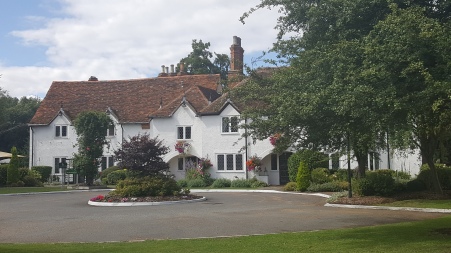 compliment the older. The large barns after which the hotel is named are used as a venue for weddings etc. The entrance and reception is found in the corner of two white buildings. 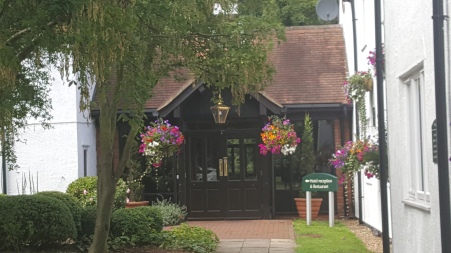 There is a small outside area behind the restaurant, overlooking the river that can be used for eating when the weather is good. We sat outside in this area following our Afternoon Tea. 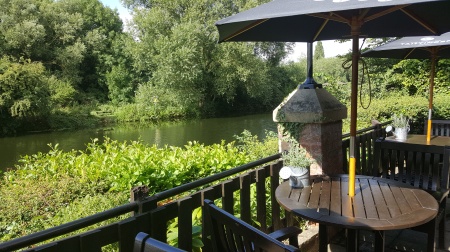 Contents – Five finger sandwiches each (ham, egg mayonnaise, smoked salmon and cucumber, cheese and pickle and coronation chicken). A medium sized plain scone, a medium sized fruit scone, a jar of Tiptree strawberry jam, and a bowl of clotted cream. A small custardy puff, choice of a mini fruit or chocolate tartlet and choice of a small square of Victoria sponge or a profiterole. The tea was made with tea bags in a chunky white china teapot.

Comments – We were seated in the restaurant area at a table reserved for us by the window, overlooking the river outside. There were four of us eating on this occasion. 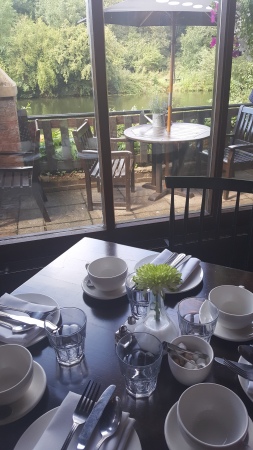 The tea was served first in chunky white teapots. Unfortunately, no milk was brought with it. It took several minutes to get the attention of anyone to get the milk for us. The afternoon tea followed quite quickly on metal three tier cake stands with chunky round white plates. My sister commented that the china was ‘serviceable’!

The sandwiches were well filled and tasty but the white bread had all the appearance of sliced mass-produced bread. The coronation chicken and the cheese and pickle were both particularly tasty. 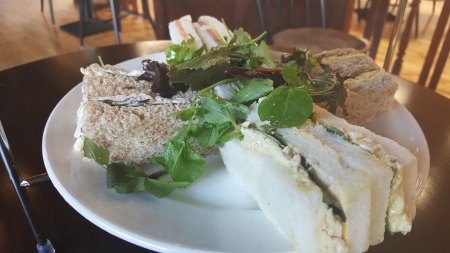 The scones were fresh and of a reasonable size. There was not enough jam in one small jar for two scones but there was an adequate amount of clotted cream for them both. We asked for and received some butter for my sisters scones. We also eventually managed to attract attention to ask for some more jam and were given another small jar. 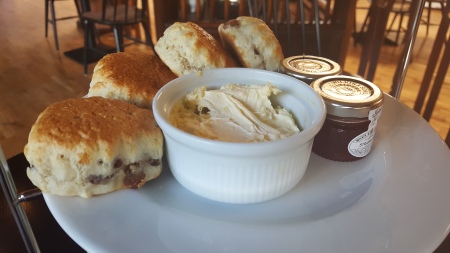 Unfortunately, this Tea was badly let down by the cakes. The advertised menu mentioned ‘a selection of Italian mignons cakes from your local pasticceria’, and goes on to list five types of cake. We were provided with three rather small offerings each, with the two cake stands having a different three on each. None of the cakes really stood out for me and I felt rather disappointed in them. A shame as the previous two levels had been good. 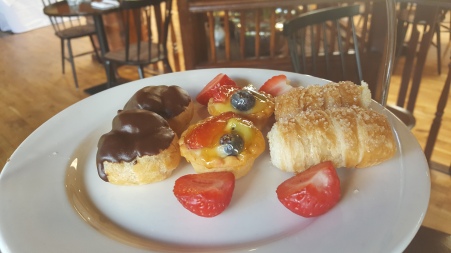 The tea was a little on the strong side for all of us. We asked for one refill, which we got.

Service was a bit mixed. The lady who appeared to be in charge was reasonably efficient and quite friendly. However, if she was busy the other staff just ignored us and walked past. This made it very difficult to get attention on several occasions.