Background – At last, our first Afternoon Tea review of 2018. And its one of the biggies!! My wonderful husband bought me a voucher for Afternoon Tea at the Claridge’s Hotel in London as a Christmas present in 2016. Unfortunately, we were never able to make it there in 2017. Luckily the voucher was valid for 18 months. The hotel’s website allows for bookings up to three months ahead. We were restricted to weekends only due to lack of holiday time, so we were very relieved to find just one slot available on a date we could manage, at a time that suited us. We booked it quickly, then rang the hotel to confirm we would be using a voucher. They told us the slot we had found was a cancellation that had just come up. We were very pleased with it!

We had a lovely day in London. We visited an exhibition at the Victoria and Albert Museum that we wanted to see, then we walked right through Hyde Park to reach the hotel. My only complaint is how very few benches there are in Hyde Park! We would have liked to have just sat for a while and watched the world go by but there just wasn’t anywhere to sit!

We entered by the main entrance through the revolving doors into the hotels lobby. Straight ahead we found the Foyer and Reading Room where we were to have our Tea.

We decided to use the toilets before going in.

They were the fanciest toilets I have ever been in! There was even a lady who turned the taps on for you to wash your hands! I would have liked to have taken a photo but decided it wasn’t really the done thing!

We returned to the lobby past an interesting piece of art. 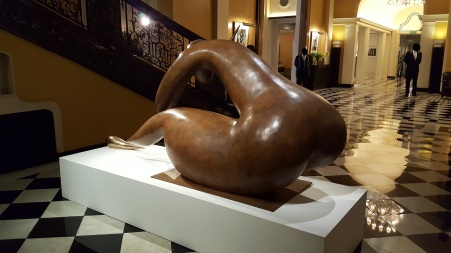 We then waited in comfortable chairs by an open fire until it was time to go and have our Afternoon Tea.

The room was pretty full but we were offered a choice of tables. We chose to sit at the back of the room.

Each table had a silver stand beside it for the waiters use. Initially it contained just the tea strainer but was later used for the teapot and various other items. 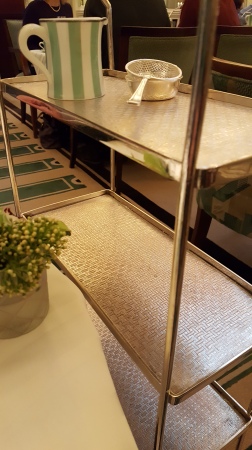 The centre of the room had a circular display above which was an interesting hanging artwork below the windowed ceiling. 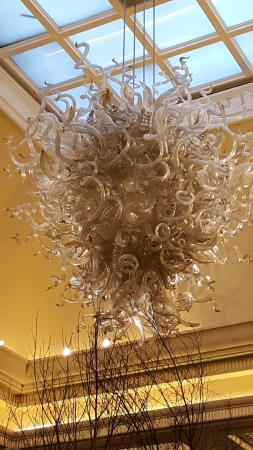 The room was very much in the art deco style and was lovely.

Contents – Five finger sandwiches (smoked salmon with shrimp butter and rock samphire on rye bread, chicken with lemon thyme mayonnaise on malt bread, ham with smoked tomato chutney and watercress on onion bread, duck egg and mustard cress on white bread and cucumber with buttermilk and French sorrel on white bread ) a cheddar and pickled walnut sable. One small plain scone and one small fruit scone, a bowl of Marco Polo gelee and a bowl of clotted cream. A plate containing four pastries – Orelys and blackcurrant Mont Blanc, blackberry and pistachio choux, Taimori and passionfruit gateau and golden fruit cake. There was a wide choice of specially blended teas served in Claridge’s own design china teapot.

Comments – We booked our Afternoon Tea online through the Claridge’s website. We had to book three months ahead (the maximum possible) and even then, we were lucky to get a cancellation slot! Our booking was made for 3.15. We were seated in the Foyer and Reading Room, which was a lovely room decorated in an Art Deco style with large mirrors down one side and small side rooms off the remaining two sides. The final side was open to the main entrance hall of the hotel. We were offered a choice of tables, choosing to sit at the back of the room on a table for two. There was a violinist and a pianist playing. 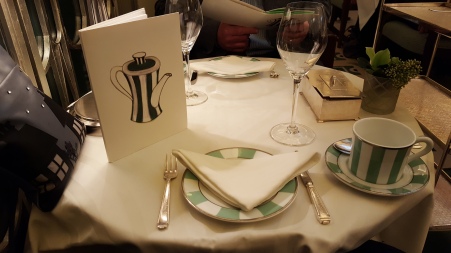 Once we were seated, we were introduced to our waiter Atilla (from Hungary!) and asked to choose our tea from the tea menu. 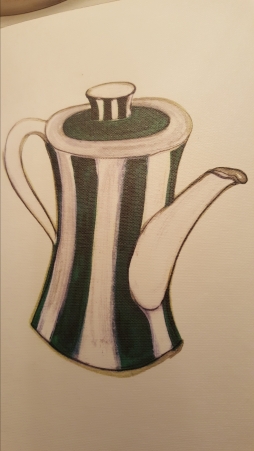 He also brought us a crested glass of water each. 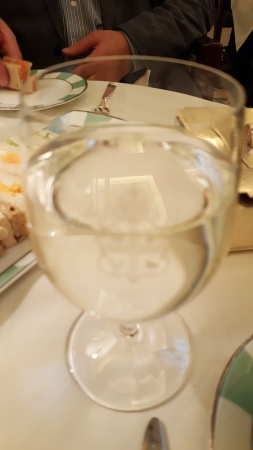 The tea was poured for us by the waiter, who appeared to refill our cups every time we had drank a few mouthfuls.

The sandwiches were served on a rectangular china plate.

The small sable was placed at the end of the sandwiches. The sandwiches were well filled and delicious but appeared not to be entirely as described. The smoked salmon did not appear to be on rye bread (although it was on brown bread), or to contain any rock samphire. The ham sandwich had no evidence of chutney at all and the bread did not appear to be onion bread. And finally, the egg sandwich contained nothing but hard-boiled egg and was quite dry tasting as there was no mayonnaise.

The menu booklet mentioned that the sandwiches should always have a filling that was the same depth as each slice of bread. Looking at the photos of both the chicken and the egg sandwiches shows this was definitely not so!

Refills were offered for any of the sandwiches. We had an extra ham and an extra chicken sandwich each.

When we had finished the savoury course, the waiter brought plates containing the scones and the pastries. The scones were on another rectangular plate along with china pots containing the clotted cream and the gelee.

There were two of each of both plain and fruit scones. The scones were quite small and were warm and fresh. The Marco Polo gelee was particularly tasty and there was a good amount of cream in the pot.

Finally, we came to the cakes. 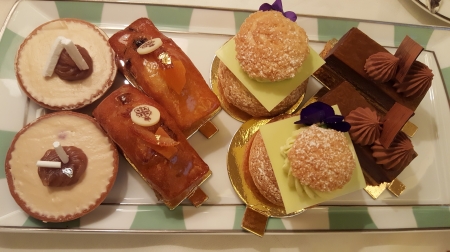 There were four each as described above laid out on another rectangular plate. All of the cakes were really good. The Mont Blanc, 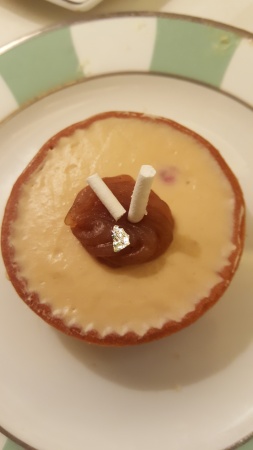 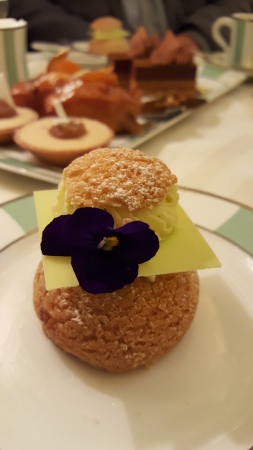 all contained a fruity element that contrasted with the rest of the pastry to give a lovely zingy flavour to them. My favourite was the gateaux, which was chocolate with a zingy layer of passionfruit. Really nice! The fruit cake was described as having spiced rum syrup, but I couldn’t taste it. 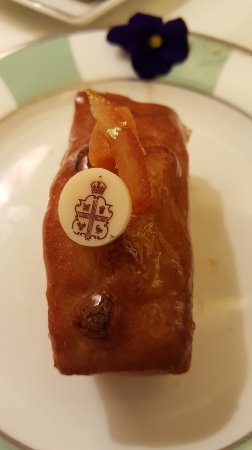 As a parting gesture we were each given a small box containing some (delicious!) Bakewell Tart fudge to take home with us.

The tea was made with loose leaves and was served by the waiter using a silver tea strainer. Each time he refilled our cups he poured more hot water onto the leaves from a separate silver pot. He also refreshed the teapot when we asked and also brought us clean teacups. There was a wide choice of over twenty different tea blends to choose from.

One thought on “Claridge’s Hotel, London.”