Parking and Access – There is a car park within the site in which Carriages is situated but it is a short walk from there to the restaurant. There are toilets available in the station building. There is a small step up into the carriages and access into the compartments is quite narrow. 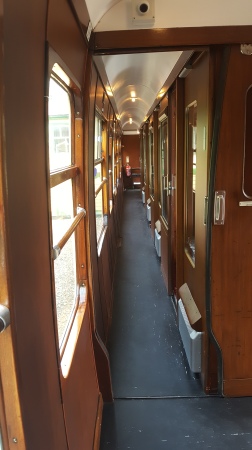 Background – Carriages only opened it’s doors recently but I have already been asked many times if I have been there yet or if I am going soon. So it seemed like a good idea to go and try the place out.

The setting is slightly bizarre. It is situated in the back of a landscape builders yard, nowhere near the railway line! The owner is a bit of a steam train nut and was offered the platform from Oakham. He then proceeded to build the station and signal box and to find the carriages. The result is a station in the middle of nowhere, with three carriages at the platform waiting to serve Afternoon Teas.

We had booked a compartment to ourselves (at extra cost). However, it was also possible to choose to sit in an open carriage. 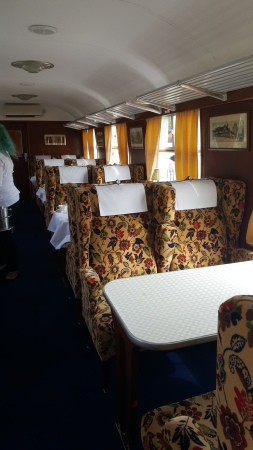 There is also a small bar area in one of the coaches with open seating.

The station is well decorated and well thought out with period decoration, old metal advert signs and even carbolic soap in the toilets!

On our way from the car park to the station buildings we had to walk through an attractive area of demonstration landscapes, including a mini Stonehenge!

Contents – Four finger sandwiches each (smoked salmon with cream cheese, two of cheese and onion mayonnaise) plus a small slice of sausage roll. One medium fruit scone and one medium plain scone between the two of us, a small pot of strawberry jam and a small pot of cream. A small cube of brownie, a small cube of fruit flapjack, a square of cheesecake and a square of coffee cake.

Options Available – There is also a High Tea available at a price of £24.50 which includes more savoury items.

each set up for four people.

The table was laid with a linen tablecloth with matching linen napkins. 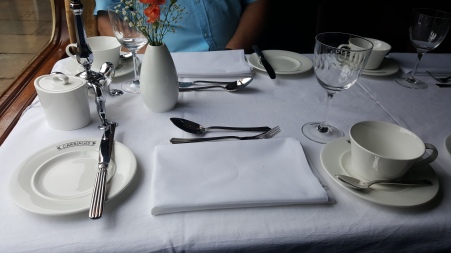 Each table had some fresh flowers in a vase.

The china was plain white with the Carriages sign on it.

The compartment had its own air conditioning unit, which made it feel very pleasant as it was a hot day outside.

We were then given a menu each.

However, the two menus gave different details for the four sandwich fillings being served. When we asked the waitress about the sandwiches, she gave another, different set of fillings. Incredibly, when the sandwiches actually arrived, they were completely different again and we were only served three different fillings!!

The tea took some time to arrive. It was made with loose leaves and was served in a stylish white pottery teapot along with a jug of milk and a tea strainer.

We were also offered a bottle of tap water with our Tea. 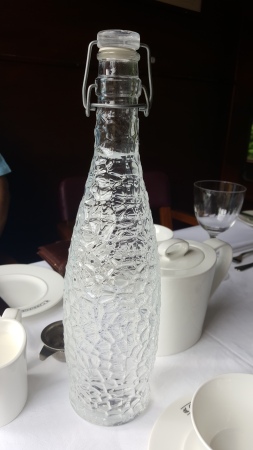 The Afternoon Tea itself took well over half an hour to arrive. It was served on a round stand with three layers.

The sandwiches were fresh and were adequately filled. However, every sandwich contained cheese in some form. This was fine for us, though we would have liked to have had a more varied selection of fillings, however, I know a few people who do not like cheese for whom this would not have been any good. 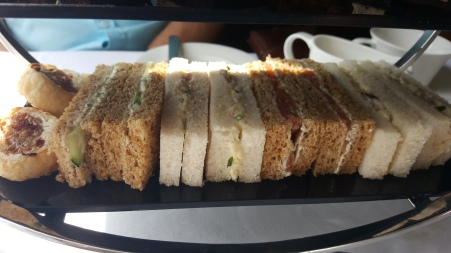 There was also a very thin slice of a quite tasty sausage roll.

There was just one fruit scone and one plain scone between the two of us. We were not offered any choice of fruit or plain despite the menu indicating there was a choice. We were also not offered a choice of Tiptree jams or homemade lemon curd as mentioned in the menu. We were just served with a small amount of very runny strawberry jam in a pot. It was described as Tiptree but I have never seen a Tiptree jam that was this runny. There was also a small amount of thick cream. Again, this was described as ‘clotted cream’ in the menu. However, I was unconvinced that it was actually clotted at all. There was not enough cream but we were unable to ask for more as the staff had all disappeared. The scones were of medium size and were reasonably fresh. 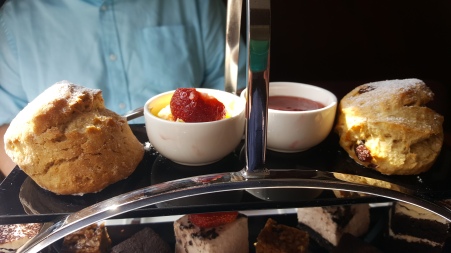 The coffee cake and cheesecake squares were both of an acceptable size and were both tasty and fresh. However, a cube of brownie and a cube of fruity flapjack, both of which were no bigger than one cubic inch in size is just ridiculously too small! The flapjack was very good. There just wasn’t enough of it.

Service was friendly but was very patchy. It was almost impossible to attract anyone’s attention without leaving the carriage to search someone out. Also, given that there are two sittings for afternoon tea – at 12.30 and 3.30, and everyone had pre-booked, it took far too long for the Afternoon Tea to arrive.

Since our visit to Carriages we have spoken to other people who have been there for Afternoon Tea who had a better experience, in particular with the content of their Tea. It is possible we hit an off day when we visited. However, I can only review the Afternoon Tea as we experienced it. Maybe we will get the chance to return and give it another try. If so, I will update my review accordingly.