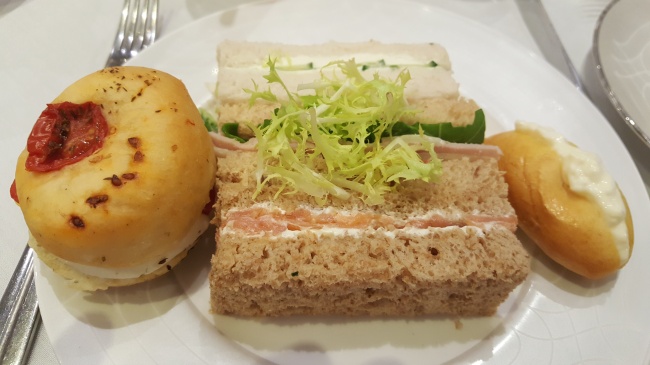 Parking and Access – The Wellesley is a hotel on Knightsbridge in the centre of London. As a result, there is virtually no parking nearby. Hyde Park Corner Underground station is nearby. There are toilets available in the hotel, accessible via two flights of stairs. A lift is available. 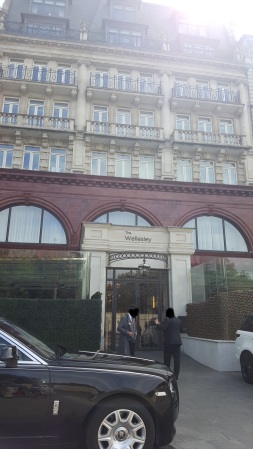 Background – When we were arranging our trip to London for the B Bakery Afternoon Tea Bus Tour we decided to stay overnight in a hotel and to find a second Afternoon Tea to have on the next day prior to our return home. There are literally hundreds of fantastic sounding Afternoon Teas available in London so I decided to consult the list of Afternoon Tea awards 2017 on afternoontea.co.uk. The Wellesley was listed as having won the best themed Tea award in 2017. The theme had changed for 2018 to Pa-Tea-Sserie Afternoon Tea but I guessed it would still be a pretty good tea. An extra bonus was that if the Tea was booked via afternoontea.co.uk the price was reduced by £5 and it included unlimited Pimm’s to drink for up to one and a half hours! That was a pretty good bonus so we decided this was the Tea we would try.

A couple of weeks later The Wellesley received an Award of Excellance – Commended in the Afternoon Tea Awards 2018.

Options Available – No options were offered for this Tea.

Comments – We were served our Afternoon Tea in the Jazz Lounge. We were the first to go into the room so we were offered our choice of tables. We chose one at the centre of one edge of the room.

The room was not too large, around ten tables and was very nicely decorated. There was a piano in one corner which was played throughout our Tea. 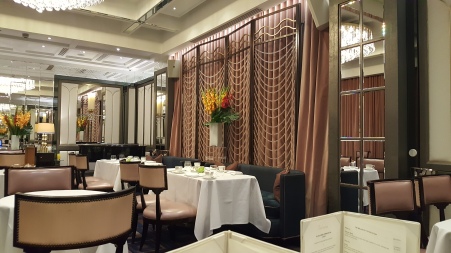 We were offered some water as soon as we were seated. We asked for tap water and were served a glass of iced water from a jug. We were also asked which type of tea we would like to drink. We chose English breakfast from quite a big list of teas. 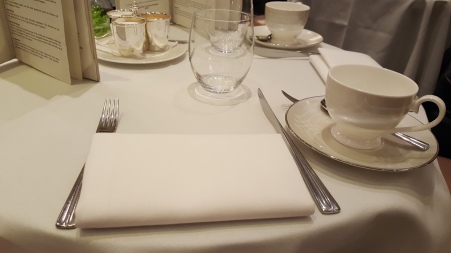 The tea arrived in a large silver teapot each with a fabric cover on the handle. There was also a lidded silver milk jug between us. 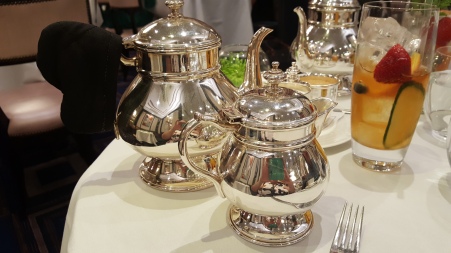 The tea was of good strength. 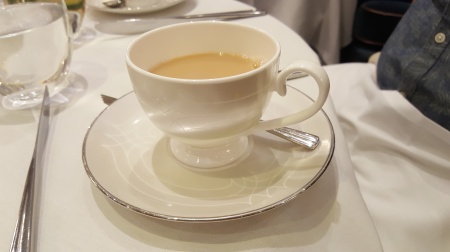 We then waited for over half an hour for the Afternoon Tea to arrive. Having been the first to be seated we were then the last to be served, with others having refills of their sandwiches before we had even received our first set. 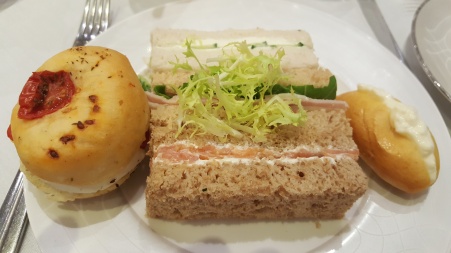 Whilst we were enjoying our sandwiches we were each brought a glass containing fruit and a straw. This was then filled from a jug containing more fruit, ice and Pimm’s. This was due to us having booked our Tea through afternoontea.co.uk who were offering Afternoon Tea at the Wellesley for a reduced price including unlimited Pimm’s to drink (for up to one and a half hours). Our glasses re refilled frequently throughout the Tea. Perfect for a warm Summer’s day. 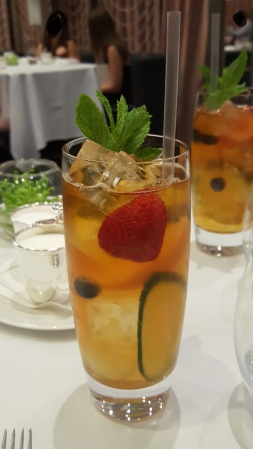 When we had finished the sandwiches, we were each brought a small glass containing a chocolate wafer cigar. 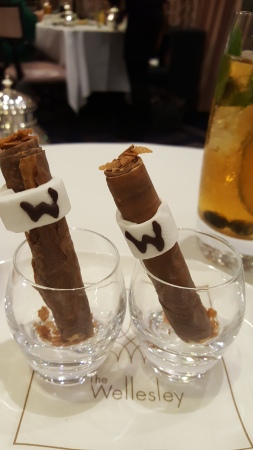 The rest of the Afternoon Tea arrived next on a three-tier cake stand with white patterned plates matching the other china in a pattern specially designed for the hotel. 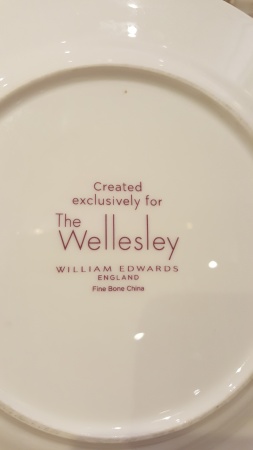 The top layer was covered with a dome, 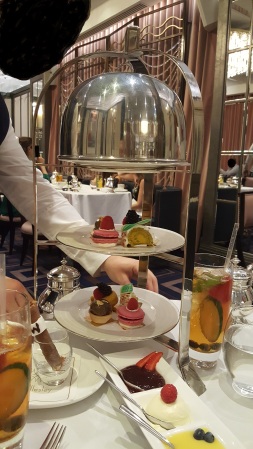 which was then removed to reveal the scones. 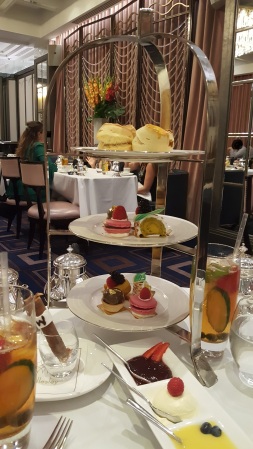 The strawberry jam, lemon curd and clotted cream were in a separate three dish rectangular plate. 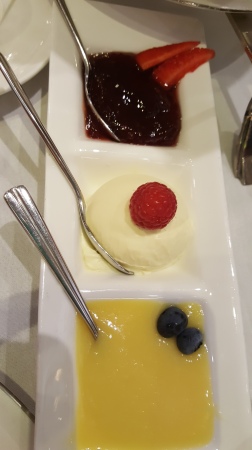 The scones had been warmed up. The fruit scone was very full of fruit. Both scones were a little on the small side but were very fresh and very tasty. 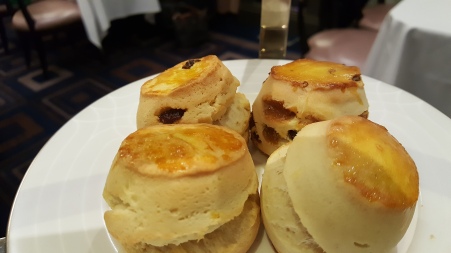 There was plenty enough jam as there was some delicious lemon curd as well. There was just about enough cream. However, we had only put cream on one scone each as we had put the lemon curd on the plain scones. If we had put cream on all of the scones there would not have been enough. 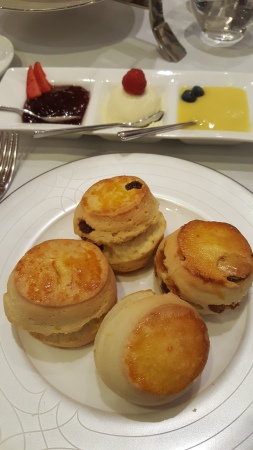 Finally, the cakes were all really good. They were all very tasty. 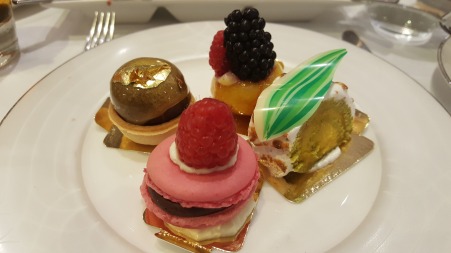 The macaroon was beautifully sticky with a delicious filling 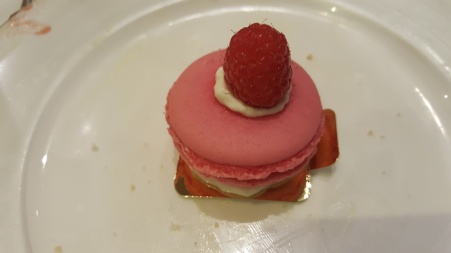 but my favourite was the apple and passion fruit tartlette with the chocolatey tea cream topping. 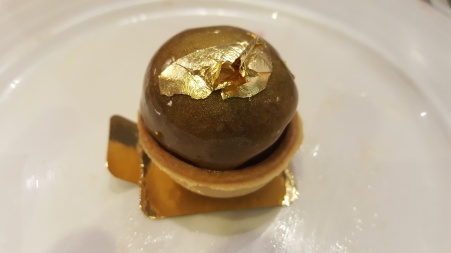 The service was very attentive, with the exception of the slow arrival of our sandwiches. Our glasses were refilled frequently, as were our teacups, although we concentrated on the Pimm’s rather than the tea!! It was really nice to have a relaxing Afternoon Tea with piano accompaniment on a warm Summer’s day in London.