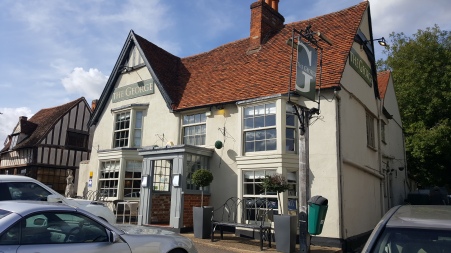 Background – Cavendish is one of those beautiful, picturesque chocolate box villages in Suffolk, not far from Lavenham and Long Melford.

It is centered around a large village green

and contains many incredibly old, rather lovely buildings. 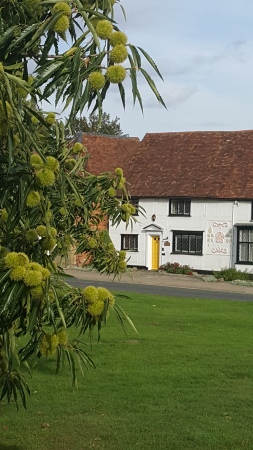 The village was home to Leonard Lord Cheshire and his wife Sue Ryder who originally set up a home for concentration camp survivors. Sue Ryder homes now support people with complex needs and life-threatening illnesses. There is still a Sue Ryder shop in the village across the road from The George.

Contents – Three different shaped rolls each (a round poppy seed and olive bread roll with smoked salmon and brie, a spiky tomato bread roll with a chorizo mix filling and an oblong brown cheesy roll with cheddar cheese and chutney). Two small/medium sized plain scones, a dish of strawberry jam, a dish of hedgerow jam a dish of apricot jam and a large dish of clotted cream. A macaroon, a mini chocolate mousse tartlette, a mini panna cotta dessert, a mini lemon posset dessert, a piece of biscotti, some slices of fresh fig and a cube of clotted cream fudge. A pot of tea.

Options Available – No options were available.

Comments – This Afternoon Tea needs to be booked in advance and a deposit of half of the total paid.

On arrival we were shown to a table in the front of the old timbered building, 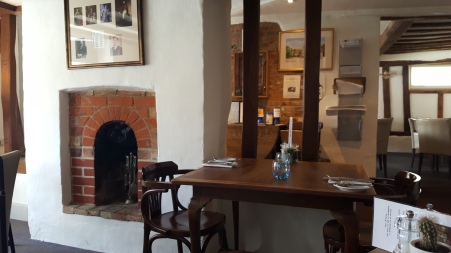 set with pretty blue and white china and linen napkins.

We were asked straight away what tea we would like to drink and were offered a carafe of tap water as well. 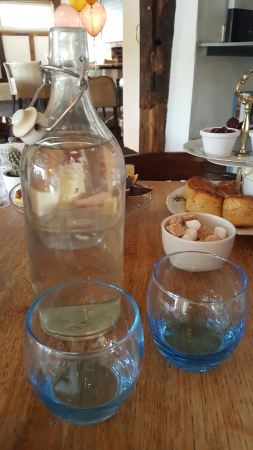 The tea arrived in a swirly white teapot along with a jug of milk. It was a good strength and we were offered refills of the teapot when needed. The tea was made with teabags. 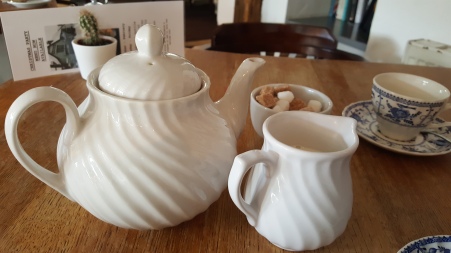 The rest of the Afternoon Tea arrived soon after on two pretty glass plates and a two tier, spindle type, cake stand with pretty flower-patterned plates.

The rolls were lovely. They were very fresh and were well filled and they were extremely tasty. 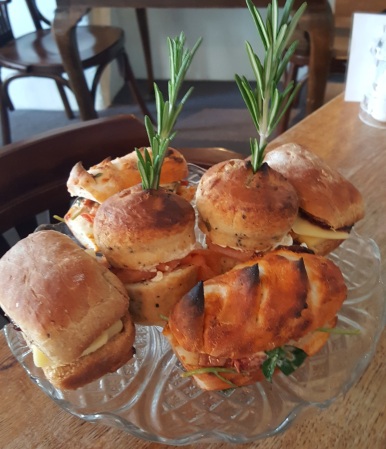 The different bread types were all delicious 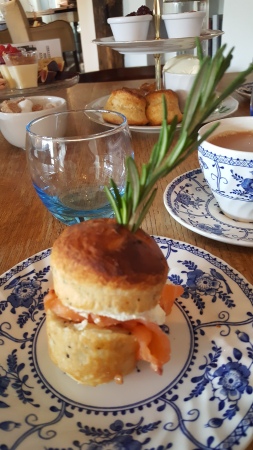 and complemented the various fillings nicely. 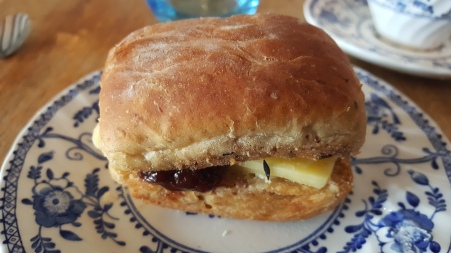 It was quite different to the usual sandwiches and was a really good start to the Afternoon Tea. 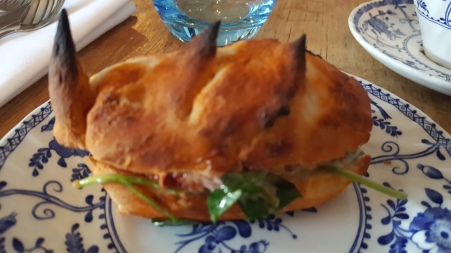 There were three different, clearly homemade, jams to accompany the scones. All were really tasty, though two were a little runny.

The scones were fresh and homemade and there was more than enough clotted cream!

The scones were not particularly large

and there were three jams and lots of cream to fit on. So, with careful slicing, I was able to cut my scones into three layers each. This meant I could have two pieces of scone with each jam type on. My husband just mixed his up!

Despite doing all this, we still couldn’t manage to finish all the clotted cream or the jam. Believe me, we did try!!

All of the sweet items were very good. The macaroon was filled with chocolate and the mini tartlette was topped with a sprinkle of gold. We were not so keen on the biscotti but it was still tasty. The two mini desserts were both really yummy. The panna cotta was topped with some stewed apple, whilst the lemon posset was topped with raspberry. The posset was my absolute favourite, as it usually is when it is included. Finally, there was a delicious cube of fudge. When the plate had arrived with the sweets on, we thought there were two cubes of cheese! That’s odd, we thought, why have they put cheese on there. When we ate it, we realised it was a really good, smooth piece of clotted cream fudge! Delicious! And so much nicer than a cube of cheese!! 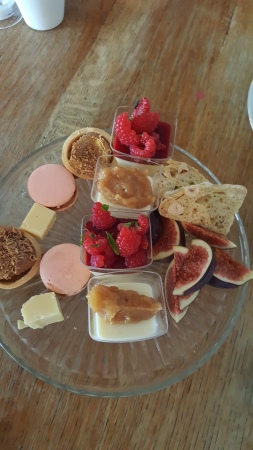 Service was attentive and friendly, despite the staff being very busy trying to get ready for an event later on.