Parking and Access – There is a large car park to the rear of the hotel with plentiful parking available. The car park is next to the entrance to the hotel. There are toilets available in the hotel, accessible without steps.

Background – For this Afternoon Tea we were going to be joined by a couple of special friends who live in the local area. We had settled on the Miramar Hotel as it had been recommended to our friends by a work colleague.

The Miramar Hotel is an attractive hotel overlooking the sea from the cliff top road in Bournemouth. The “Afternoon Tea by the sea” is served in the hotel’s drawing room which has views over the sea. In the summer months it can also be served on the terrace in front of the drawing room. 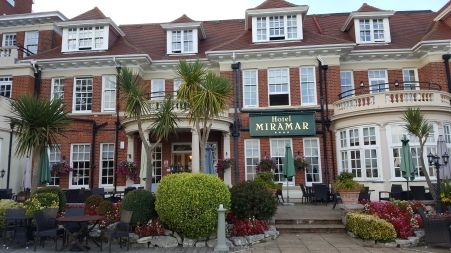 Comments – We were served our Afternoon Tea in the Drawing Room, facing the sea. There were already two larger groups seated when we arrived and we were given a table a little away from them on the other side of the room.

We were also asked if we wanted tea or coffee and all chose tea.

The tea arrived in two large silver teapot, plus two slightly smaller teapots containing hot water. There were two small milk jugs between the four of us. The tea was of good strength and was made with tea bags. 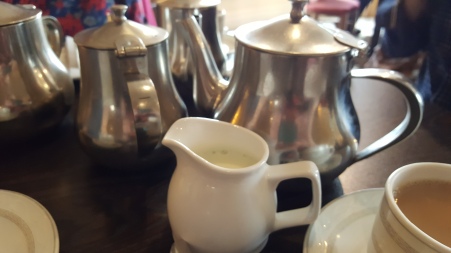 The Afternoon Tea arrived on two two-tier cake stands plus two plates containing the scones, jam and cream. We had a bit of trouble fitting things on to the table, which was already covered by teapots! In the end we used a side table as well. 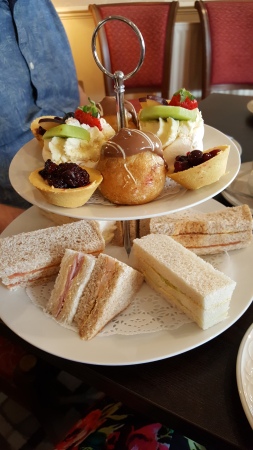 The sandwiches were adequately filled. However, I felt that the cucumber sandwich, which was one of the triple layer “club” sandwiches was a little too ‘bready’ as the cucumber was very thin!

The scones were nicely made in a hexagonal shape, with icing sugar dusted on the top. There was plenty of both jam and clotted cream. The scones were very tasty and fresh but could have done with being a little bigger.

The cakes were all very good. The profiterole was well filled with cream and was fresh and light whilst the mini tartlets were delicious. However, my favourite was the meringue topped with cream and fruit.

The service was not very attentive. We tried to obtain a refill of a teapot, but struggled to get the attention of a waiter. When we managed we asked for a refill of one of our teapots, thinking that would give us all an extra cupful. However, he returned with a tiny teapot for one, plus another tiny pot containing water! At least it made us all laugh! We were just about able to get a small cup each out of the two pots.