Parking and Access – There is plenty of parking available in the hotel’s large carpark, including disabled parking nearer to the entrance. There are toilets available near the entrance, that can be reached on the flat.

Background – We visited the Quy Mill Hotel some years back for their festive Afternoon Tea. We had always intended to return for the ‘normal’ Tea but had not got around to it, so it was about time we did!

Contents – Four rectangular sandwiches (mozzarella cheese and watercress, chicken and pesto, smoked salmon and cucumber, curried egg mayonnaise and parsley). One large scone (your choice from plain, cheese or chia seed and ginger), a pot of jam and a pot of clotted cream. A praline macaroon, a piece of coconut shortbread, a chocolate truffle lollipop, a small piece of baked passion fruit cheesecake, a small piece of chocolate layer cake and a mini glass of coffee soufflé). The tea was made with loose tea.

Options Available – There is also a gentleman’s Afternoon Tea available, and also a children’s version. A glass of Prosecco or Champagne can also be added.

Comments – We were able to book earlier on the same day for our Tea.

On arrival we were shown through to the restaurant, to a table for two.

The table was laid with patterned white china, cutlery and a black paper napkin. We were shown the current menu and were asked what we would like to drink. We chose the standard English breakfast tea.

The tea arrived quickly in a round stainless-steel teapot accompanied by a small white jug of milk.

A short while later, the Afternoon Tea arrived on a three-tier cake stand with round white plates.

The sandwiches were slightly unusual. The chicken was slow cooked and was more like a pate in texture. The cheese was mozzarella and the salmon was topped with wafer thin cucumber. However, the most unusual was the curried egg mayonnaise. Any regular readers will know that I love egg mayonnaise. It is one of my favourite fillings. However, I really wasn’t sure about this curried version. All of the sandwiches were fresh and were reasonably well filled. They were on a mix of white and brown bread.

We had both chosen the chia seed and ginger scone. The scone was a good size, fresh and warm. The seeds gave it an interesting texture, which I rather liked. However, neither of us could detect any ginger flavour at all. 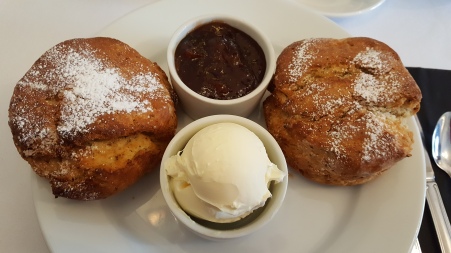 There was plenty of jam, though neither of us could work out what flavour it was! There was also plenty of clotted cream.

Finally, we reached the cake layer. There was a nice variety of items, although it was fairly chocolate biased (no complaints there!!). None were particularly large, but we found that there was plenty, and we were nicely full when we had finished! Everything was tasty and fresh and there was nothing we disliked. My favourite was possibly the praline macaroon, which was nicely sticky and had a lovely praline filling. I also liked the coconut shortbread but my companion thought it had too much coconut in it. The coffee souffle was interesting, being more of a froth than anything else. 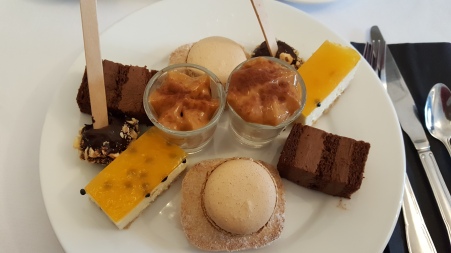 The tea was made with loose tea leaves which were held in a cage within the teapot so no strainer was needed. It was of a good strength for both of us. We asked for a refill and were given a second pot of tea.

Service was very good – attentive but not overly so.