Parking and Access – Parking in Cambridge is limited and very expensive. There is some on street metered parking in the road behind the hotel. Otherwise the Queen Anne Car Park is just across Parker’s Piece to the hotel. Access to the hotel is flat, as is access to the lounge and bar areas where Afternoon Tea is served. These areas are both just inside the main entrance.

Toilets are located nearby and are also accessed on the level with no steps to negotiate.

Background – We first visited the University Arms hotel in September 2014 (see my earlier review). The hotel was then closed for redevelopment for several years. The whole hotel was demolished apart from the outer walls of the original hotel. It has been rebuilt into a beautiful building reflecting the style of the original, using the original outer walls and extending the building forwards to the road (replacing an extension built in the 1960’s).

The front entrance is now a huge arched and pillared affair with three large doors.

Contents – Three triangular sandwiches each (smoked trout, coronation chicken and beef with mustard and pickles) plus a small pastry boat containing crayfish and a small piece of sausage roll. One medium sized fruit scone, a small dish of blackcurrant jam, a small dish of apple butter and a small dish of clotted cream. A rice pudding macaroon, an iced saffron and rose cake, a chocolate truffle, a slice of Duke of Cambridge tart and a small apple shape of apple mousse. A pot of tea.

Options Available – There were no options available.

Comments – Afternoon Tea is served in Parker’s Tavern within the hotel and must be pre-booked.

We arrived at the entrance of the hotel to be greeted by a lady at a desk. She checked our booking then took us through the lounge area to the busy bar

where a small table was reserved for us near the windows overlooking Parker’s Piece, a large open grassed area near the centre of Cambridge. 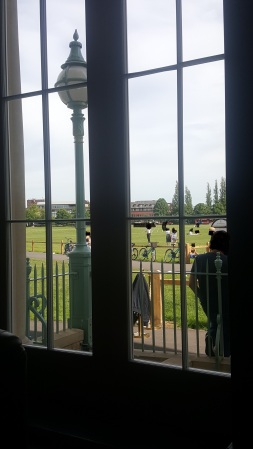 The table was set ready for us with round plates depicting scenes appropriate to Cambridge, linen napkins and a knife and fork.

We particularly liked the plates,

which even commemorated an incident similar to one from our own Cambridge past!!

We were asked for our choice of hot drink to accompany our Tea. We chose an English breakfast tea.

The tea arrived a few minutes later in a large silver coloured metal teapot along with a jug of milk. The tea was extremely strong. We asked for more hot water to dilute it a bit, but it was still very strong. Eventually we removed the enormous teabag, which appeared to contain at least six or seven teaspoons of tea leaves, and asked for yet more hot water. We were brought a small jug full which we added to the pot. It was still almost undrinkable!!

The rest of the Afternoon Tea arrived around ten minutes later on a metal three-tier stand with round white plates. 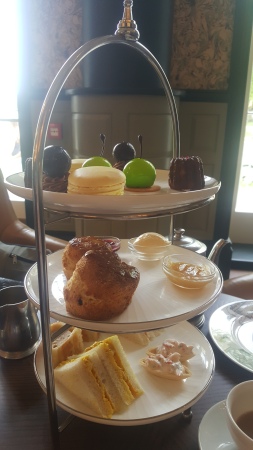 The stand was topped with a representation of the lamppost known as Reality Checkpoint which is found at the centre of Parker’s Piece.

When we had booked our table, we requested our beef sandwiches without mustard. When the stand arrived, there were no beef sandwiches at all. They had been replaced with avocado sandwiches! We had not asked for the beef sandwiches to be replaced, just made without the mustard and, anyway, I hate avocado! We tried patiently to explain all this to the waitress but she didn’t really seem to understand the problem. Eventually she took the whole stand away again!

The sandwiches were all fresh but rather under-filled. There was a mix of brown and white bread, with the beef and gherkin sandwiches made with brown bread. The beef sandwiches appeared to be made with a thin slice of packaged processed beef and a lot of sliced gherkin in vinegar. Sadly, they were not very good.

The savoury selection also included a tiny pastry boat with some crayfish in it, and a small piece of sausage roll. The boat tasted a bit sweet but the crayfish mix was tasty. The sausage roll was a bit bland.

The menu told us we would have raspberry jam. However, we were given a small dish of what appeared to be blackcurrant compote. There was also a small dish of apple butter, which was tasty and unusual. There was barely enough of either. Luckily there was just about enough clotted cream.

The whole Afternoon Tea was supposed to represent different aspects of Cambridge. The pastry boats represented the boat race, the sausage roll represented nearby Newmarket, the sandwiches represented the Earl of Sandwich who studied at the University, and the scones represented an enormous tea served on Parker’s Piece for Queen Victoria’s coronation. The cakes were the best part of this story of Cambridge.

The iced saffron and rose cake was there to represent nearby Saffron Walden where saffron was grown. It was rather tiny and the dot of icing was laughable. However, it was tasty. 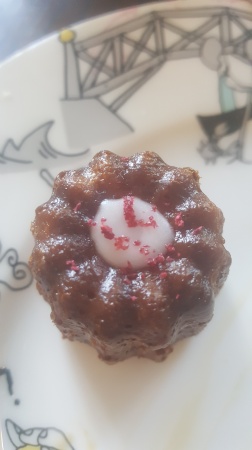 The rice pudding macaroon represents a chemist from Magdalene college who helped investigate the Nazi’s chemical weapons during World War Two. This was a reasonable size, sticky and very good.

The football truffle represented the rules of football originating on Parker’s Piece. The truffle was ‘deconstructed’ with the filling under the empty chocolate case. It was delicious, but I would have preferred the filling inside the case!

The apple represented Sir Isaac Newton, who studied in Cambridge and developed his theory of gravity there. The apple was very clever and was good. It was supposed to contain a centre of apple compote but mine did not appear to have any.

Finally, the Duke of Cambridge tart was to represent Cambridge tart, which has been around for a very long time. It was the very best part of the Tea. It was brought out to us when we were eating the scone, on one of the Cambridge plates. It was a delicious sticky treacle tart. I could have quite happily taken a whole tart home with me! It was really good.

The service was, for a big central Cambridge hotel charging such high prices, barely adequate. From the problems with the sandwiches to the trials with the tea and hot water, we seemed to struggle. No-one was available to help and no-one asked how we were. The table next to us had to get up and search for someone when they wanted their bill. There as one exception though – the waiter who dealt with our bill was helpful and polite. What a pity he hadn’t been there earlier!

This Afternoon Tea was an excellent concept. However, it could have been so much better than it was. We felt that, if they are going to charge top hotel prices (and this was expensive, even by Cambridge standards), then they need to use top hotel ingredients and provide top hotel standard staff. We did enjoy our Tea very much, as we always do. However, on this occasion the price did not match the quality of some parts of the Tea.

One thought on “The University Arms Hotel, Cambridge. Cambridgeshire.”