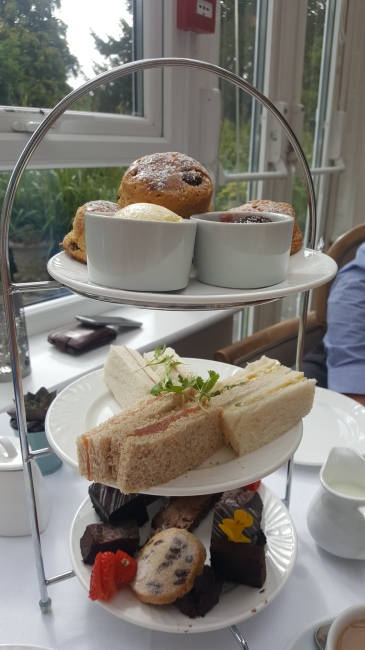 Parking and Access – There is a car park right outside the building with plenty of spaces. There was a small slope up to the main door, with flat access to the nearby conservatory where the Afternoon Tea was served. The toilets were not far away with access on the level.

Background – We were looking for a second Afternoon Tea to try during our visit to the New Forest area. We settled on the Woodlands Lodge Hotel as it had a Chocoholics Afternoon Tea. We both love chocolate (doesn’t everyone??) so we decided this would be ideal for us.

Comments – A small table had been reserved for us in the conservatory area of the hotel, 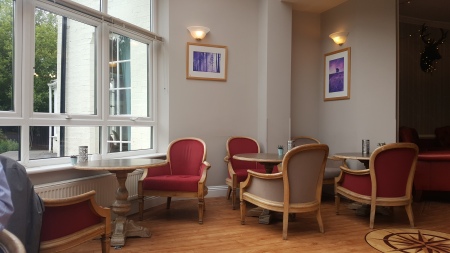 The table was laid with a white linen tablecloth, round white pottery plate, white cup and saucer, a knife and a linen napkin. We were asked straight away if we wanted tea or coffee to drink. We chose tea.

The tea arrived quite quickly in a large metal teapot, accompanied by a white jug of milk. It was of a good strength. We were offered a refill but didn’t need it on this occasion. The tea was made with teabags. 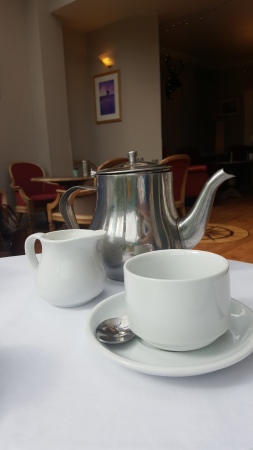 We also asked for, and received, a jug of tap water. 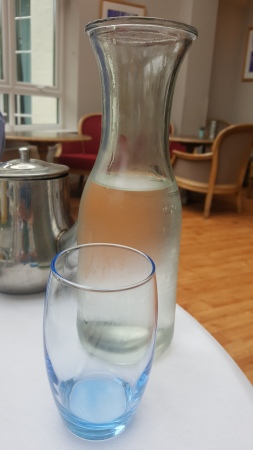 The Afternoon Tea arrived a few minutes later on a plain metal three tier cake stand with round white plates.

The sandwiches had been made earlier and refrigerated. They were very cold. There were still some bits of cling film stuck to the plates. They were not particularly well filled, particularly the ham, in which a small piece of thin packet ham didn’t even cover the bread. There was a mix of brown and white bread, with the smoked salmon on brown bread. The sandwiches were different to the advertised fillings with egg mayonnaise replacing cucumber.

The scones were both medium sized and had been warmed up. The fruit scone was not freshly made and the plain scone had been rather overcooked. There was plenty of slightly runny jam but there was nowhere near enough clotted cream. We did not ask for more as we rarely saw anyone to ask.

The cake part of the Afternoon Tea again differed from that advertised on the hotel’s website as there was no chocolate tart. The biscuit was fresh and tasty and the piece of brownie was good. The piece of chocolate ganache was difficult to eat, as it was soft, but was ok. However, the small square of chocolate cake was rather dry and the small flat square of sponge was like biting a piece of brown polystyrene! Neither of us could eat it. It was tasteless and tough! 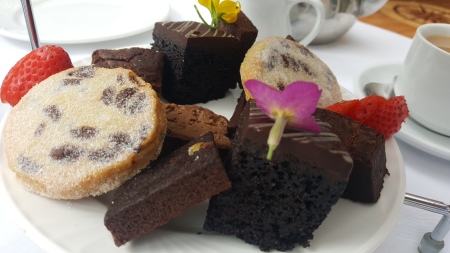 Service was ok to start with but then it became difficult to find anyone. We were the only people eating so that is probably why. We even had to search for someone to pay when we had finished.