Parking and Access – There is a small car park outside the entrance of the hotel. The entrance is up three or four steps. I did not notice an alternative way in. Once you are in the hotel, the toilets are reached on the flat from the restaurant.

Background – This was a random venue chosen from my large list of Afternoon Tea venues I have spotted either on the internet or when out and about.

The Thomas Paine Hotel can be found at the blocked off end of Whitehart Street in the centre of Thetford. It is a small hotel with a restaurant and a lounge bar. There is a small outdoor area to the rear of the hotel. 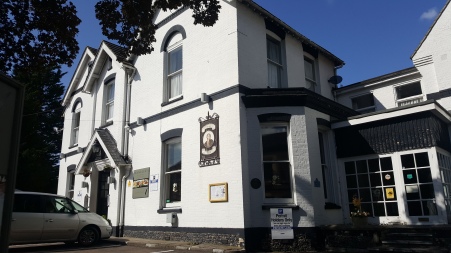 Contents – Thirteen rectangular sandwiches between the two of us (egg mayonnaise, ham, smoked salmon and cheese). One small medium fruit scone, a very small amount of strawberry jam and an even smaller amount of clotted cream. A cupcake, a macaroon, a square of chocolate sponge, an unidentified piece of sponge cake with a soft topping and a mini dessert of jelly and mousse. A pot of tea.

Options Available – There is also a standard Afternoon Tea available.

Comments – We had booked our Tea with twenty-four hours’ notice, as requested by the hotel, and paid a five pound deposit each.

On arrival, we were shown to our table in the restaurant area of the hotel. There were already two other tables in use for Afternoon Teas.

The table was laid with pretty matching china, a knife and teaspoon, a glass and a paper napkin. We were asked if we wanted tea or coffee. We chose tea, as usual.

The tea arrived quickly in a large white china teapot along with a large white jug of milk. It was a bit strong, so having poured out a cup each, we asked for the tea to be topped up with hot water. The tea was made with teabags.

The Afternoon Tea arrived shortly afterwards on a three-tier cake stand with large, pretty round plates that matched those that the table was set with.

The sandwiches were freshly made and there was a mix of brown and white bread. The rectangles were quite thinly cut but were long. The cheese was particularly flavoursome. However, we have no idea why there were thirteen sandwiches between us!! 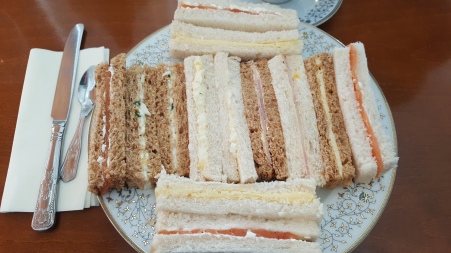 The scone was fresh and clearly homemade. Both were rather wonky, which made them rather difficult to cut and to spread on.

Shortly after we had arrived, we overheard another table asking if they could have some more cream. They were told the kitchen had run out! This is the second time we have been told this during this summer – I hope it is not going to become a habit! The first time I didn’t believe it, this time it was clearly true. There were ten people having Afternoon Tea that day. All had booked ahead and paid a deposit. They knew how many people would be coming in, yet they did not have enough clotted cream to serve them! We later suggested they should have sent someone out to the nearby Sainsbury’s store to buy more. We were told they had a superior supply and wouldn’t do that!! Wouldn’t it have been better to have been able to supply enough of an essential part of the Tea with a supposedly inferior product and an explanation, rather than just give an almost unusably small amount to each person?

We were able to obtain more of the jam, which had the appearance of catering jam, so that we could have one half of the scone with just jam and one half with a thin layer of cream. Note – The photo was taken before the cream was spread! 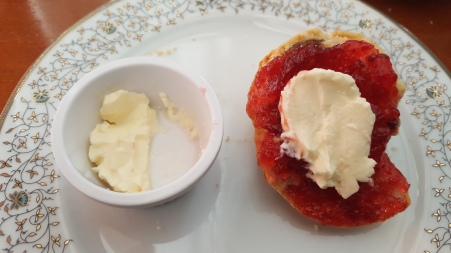 On the cake layer, there was a square of sponge cake topped with soft topping. This was then topped with almonds. Unfortunately, the almonds had been burnt badly. This made them taste and smell like burnt matches! We both had to scrape the burnt layer off in order to eat this piece of cake. 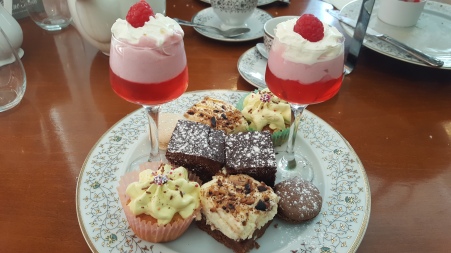 Of the other cakes, the chocolate sponge was rather dry, and the jelly had not set properly. The macaroon appeared to be from a packet – the two were different colours – but was fresh and chewy. Finally, the cupcake was probably the best part.

The young waiter in the restaurant was ridiculously over attentive! He was asking if all was ok every few minutes! However, at least he was available if anyone required anything.