Parking and Access – There is one step to enter the building and the dining room. The toilets are up a flight of stairs with no alternative access. There is on-street parking available in front of the building.

Background – I found Piglets Pantry by chance when on the internet one day. What a find! The company is based in Worthing. They supply hand filled pies, sausage rolls, cakes and biscuits to venues such as football and rugby grounds. The company sounded friendly and the products looked tasty in the photos on their website.

They looked interesting and a bit different, so I ordered one of their Afternoon Teas for Two.

Contents (per person) – One cheese and chive quiche, a Scotch egg, a mini traditional sausage roll and a cheese and pickle sausage roll. One medium plain scone, a mini jar of Tiptree strawberry jam and a tub of Rodda’s clotted cream. One small carrot loaf cake and between the two of us, a small blueberry and banana loaf cake and a small chocolate chip and caramel drizzle loaf cake. A Teapigs Afternoon Tea teabag (sorry – tea temple!!) and a Teapigs Earl Grey teabag / tea temple.

Options available – There is also a vegetarian Afternoon Tea available.

Comments – As with our previous Afternoon Teas by post, our Tea was ordered online to arrive on a specific date. Once again, it arrived on time on the date specified.

The box was clearly labelled to say it contained perishable goods

and was a chilled package.

It also had a label saying it must be delivered that day.

Inside the box was a layer of paper based insulating packing.

This was wrapped around a second, pink, box which contained all of the Tea items.

Underneath the pink box there was a freezer pack, which was still partially frozen! Very impressive!

It looks like we may have to keep the external box with its insulating paper, which is all recyclable, as it has proved very popular with one of my cats!!

Several of the items required putting in the fridge until needed. So, we put the sausage rolls,

and cream pots in the fridge.

We left the rest in the box as we were going to be eating the Tea that day.

I have based my presentation score on the way the package was presented and the state it was in when it arrived. It was extremely well packed and well presented. 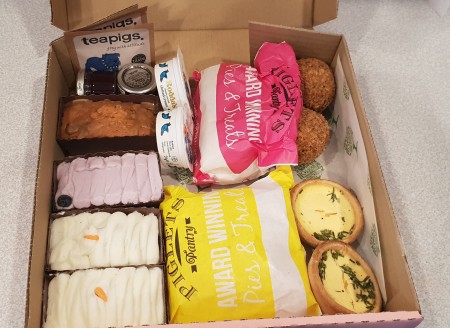 We served our Afternoon Tea on our dining table. It was laid with pretty blue and white china and a fruit patterned china mug each.

The tea was served in a blue cat patterned teapot accompanied by a white milk jug with a blue edge. The tea was made with the Teapigs Afternoon Tea teabag (or tea temple, as Teapigs prefer to call them)

provided. It was a nice flavoured tea and was just the right strength for us.

This Tea included plenty of savoury items, so there was no need to make sandwiches to accompany it.

We heated up the quiche, scones, and my companion’s sausage rolls (I prefer mine cold). The quiche was not too small, and was very tasty. The sausage rolls, which were described as ‘mini’, were not too small either. They were both absolutely delicious. I may well have to do a sausage roll order from this company!! The scotch eggs were also very good. A very good savoury section to the Afternoon Tea.

The scones were a slightly small medium size and plain. They were tasty and fresh.

The Tiptree jam was tasty as usual,

and there was plenty of it for the scone. There was also enough of the clotted cream, which was of a smoother texture than we have received on a couple of occasions lately.

Finally, the small loaf cakes were not that small at all. We received two carrot cakes, a blueberry and banana cake and a chocolate chip and caramel drizzle cake between the two of us. We had a carrot cake each and cut the other two in half so that we could each try everything. In fact, there was so much cake, we had to save one each for later and come back to it!

All of the cakes were really good. The chocolate chip had loads of chocolate in it and the drizzle topping was delicious. The blueberry and banana was never going to be my favourite as I am not that keen on bananas, however, it was moist and still tasty. The carrot cake was particularly good. It was moist and so tasty. One of the best carrot cakes we have tried for a long time! An excellent cake section!

Finally, I have based my service score on the service we received from the on-line company. In this case, we felt it was really good. The website was well presented and clear, and the box arrived exactly as promised and in an excellent condition.

This has been a particularly good Afternoon Tea by post. And was all the better for including the savoury items as well. I would definitely recommend giving it a try. I hope they continue to do Teas by post once the corona virus pandemic is over.