Parking and Access – As with our previous Afternoon Tea, we decided to take our Tea out to Thetford Forest to eat as a picnic. We went to the same picnic area – St Helen’s Picnic Area, near Santon Downham. There was plenty of parking available on the site. However, the toilet block was still unavailable due to the pandemic.

Background – Having really enjoyed our first Afternoon Tea from Piglet’s Pantry, we were delighted to see they were offering a slightly different version for Father’s Day.

I ordered the Tea from the website about a week and a half ahead, with no problems. It arrived, as expected, on the day requested.

Contents per person – A mini ham hock and red Leicester Quiche, a cheese and chorizo scotch egg and half of a large sausage and red onion chutney roll. A medium sized plain scone, a small jar of Tiptree strawberry jam and a small tub of Rodda’s clotted cream. Two loaf cakes (we received two sticky toffee pudding cakes and one each of passion cake and lemon drizzle between the two of us). An Afternoon Tea teabag and an Earl Grey teabag, both from Teapigs, between the two of us.

Options available – There were no options to add to this hamper.

Comments – The Afternoon Tea arrived in a large cardboard box. The box was marked ‘Urgent, Perishable Goods’ and ‘Fragile’. There was also an instruction to open the box on arrival. 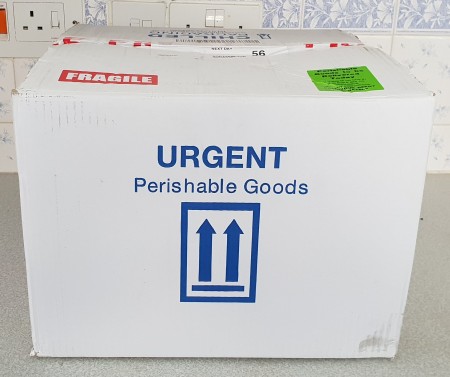 Inside the box was a second pink box containing the Afternoon Tea.

This was sitting on top of an ice block, which was still partially frozen.

Everything was surrounded by a good layer of insulated paper packing.

We had decided to take our Afternoon Tea out to Thetford Forest to have as a picnic. We took two folding chairs and a folding table with us, plus a picnic hamper. We were able to set ourselves up with a view towards the river and the forest, in a large grassy area next to the car park.

We decided against trying to make a pot of tea. So, instead, we had a couple of bottles of cold drinks with us. I have therefore given the tea a score of two, in line with other Tea’s where we have not had tea to drink. However, we know from our previous Piglet’s Pantry experience that the tea is very good.

We served the Afternoon Tea on a two-tier cake stand with pretty flower-patterned plates, which we had taken with us. We try to do it properly, even in a forest!!

The savoury selection with this Afternoon Tea meant that we did not need to make sandwiches to take with us. All of the savoury items were really good and were really tasty. My particular favourite was the sausage roll, which had a small amount of red onion chutney in it. Personally, I would have liked to have found rather more chutney around the sausage. However, it was still excellent!

The scone was a medium sized plain scone. I felt I detected a slight taste of vanilla in the scone. It was fresh and tasty and we enjoyed them.

The strawberry jam was in a mini Tiptree jar. There was plenty of jam, as we had a jar each. The Tiptree jam is always good.

There was also a generous amount of clotted cream each, as we had a small Rodda’s tub each. It was a good smooth texture which made it easier to spread than it sometimes can be. 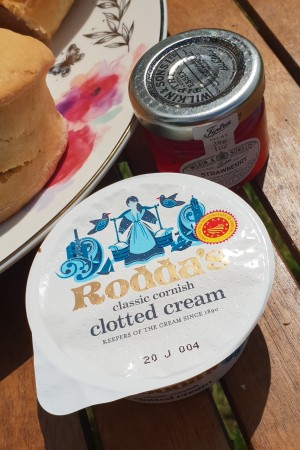 The cakes from Piglet’s Pantry are particularly good. We received four little loaf cakes between the two of us in our box. There were two sticky toffee pudding cakes, one lemon drizzle and one passion cake. They were all big enough to share, so we had some of each cake. The cakes were all delicious. They are moist and flavoursome. We very much liked all of them!

Piglet’s Pantry also do boxes of their cakes by post. I think we may have to order some in the future….

As usual with our lockdown Afternoon Teas, I have based my presentation score on the way the package was presented and the state it was in when it arrived. This package was particularly well packed, with all the information needed on the outside. The contents had been kept cold and were in good condition when it arrived. 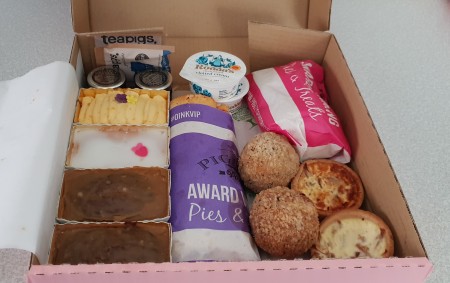 I have based my service score on the service we received from the on-line company. Piglet’s Pantry have a good clear website, an easy ordering system and kept us informed of the state of our order at all times.

I remain completely anonymous and always pay for my Afternoon Teas. They are never gifted to me by the businesses.