Parking and Access – As we were picking our Afternoon Tea up from the bistro in Bury St Edmunds, we decided to find somewhere in the area to eat it as a picnic. We chose Nowton Park, which is in the town. There was a very large carpark, which has a small charge for parking. We were then able to have our picnic quite near to the parking in a shady area. There were toilets available near to the car park, which were open. We did not use them so I can’t comment on them. They are run by the local council.

Background – We found the bistro Baileys2 during an internet search. I was looking for venues offering Afternoon Tea to take away. It was a venue we had not visited before, in a town we know well, so we decided it would be an excellent Tea to try.

I contacted Baileys2 initially by email. They then rang to take payment for the Afternoon Tea over the phone.

Contents per person – Five square sandwiches (ham and tomato x 2, cheese and chutney, egg and cress, and smoked salmon and cucumber). One large mixed fruit scone, a mini jar of raspberry jam and a tub of Rodda’s clotted cream. A macaroon and a mini fresh fruit tartlette each. Plus a piece of date slice, a piece of bakewell tart, a piece of fruit flapjack and a piece of tiffin, all between two people. Drink was provided by ourselves.

Options available – There was an option to add either a sausage roll or a pork pie to this Tea at an extra cost of £3.50 each. We added two sausage rolls.

Comments – We picked up our takeaway Afternoon Tea from the bistro in the middle of Bury St Edmunds at the arranged time. It was neatly packed on a plastic tray with a clear domed top.

It all looked very good.

We also picked up, what we thought was two sausage rolls. It turned out that this was two boxes with four small sausage rolls and a mini jar of brown sauce in each one! Again, they were neatly packed in a clear plastic box.

Clearly, we had over catered, due to our misunderstanding. So, we decided to keep one box of sausage rolls for later, and eat only the one box.

I have based my presentation score on the way the Afternoon Tea was presented. We were impressed with the way it had been put together.

There was no drink provided with this Tea. We took a couple of bottles of cold drink with us in a cold bag as it was a very warm day. I have scored the beverage as 2.0 to keep in line with other scores for takeaway Afternoon Teas.

We had taken our two-tier cake stand with round, flowery plates. We also took our small picnic basket which has round green plastic plates. We used one of these to put the scones on as they didn’t fit on the cake stand with all the other food on it!! 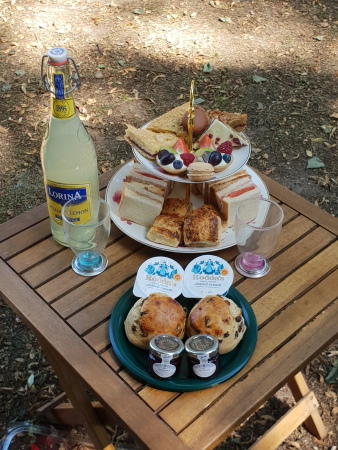 The sandwiches were all very well filled, were tasty and fresh. There was a mix of white and brown bread. The sandwiches had their crusts still on.

The sausage rolls were really tasty and were fresh. We didn’t use the brown sauce! And, owing to our mess-up, we have another box of four to look forwards to another time.

The scones were large and were made with mixed fruit, which was a very pleasant change to just raisins. They were really tasty and fresh and contained a really good amount of fruit. We enjoyed them very much.

The Tea included raspberry jam as standard. Personally, I prefer raspberry to strawberry, so I was very pleased. We were given a mini Tiptree jar each, which was just about perfect for the large scones.

The clotted cream was a small pot of Rodda’s clotted cream. Again, there was enough for the large scone, with a good covering.

We were also given a small tub of sunflower spread each, which we didn’t use.

There was a good selection of cakes included in the Afternoon Tea. We started with a macaroon each, and a small fruit tart, which had a good amount of fruit on it, and had been topped with edible glitter! Very pretty!

Then there were two smaller plastic boxes, each containing two triangles of different slices. Luckily, they were all big enough to cut in half, so we were both able to enjoy each item. All of them were really yummy and were very good. My favourites were the Bakewell tart and the tiffin.

I have based my service score on the service we received, as usual. It was friendly, efficient and helpful.

Finally, I have to say that this Afternoon Tea contained a large amount of good quality food. We were definitely very full afterwards!! Given the price of just £10 per person, this was incredibly good value. Definitely one I would recommend.

I remain completely anonymous and always pay for my Afternoon Teas. They are never gifted to me by the businesses reviewed.
I am the legal copyright holder of the content and images on this blog.