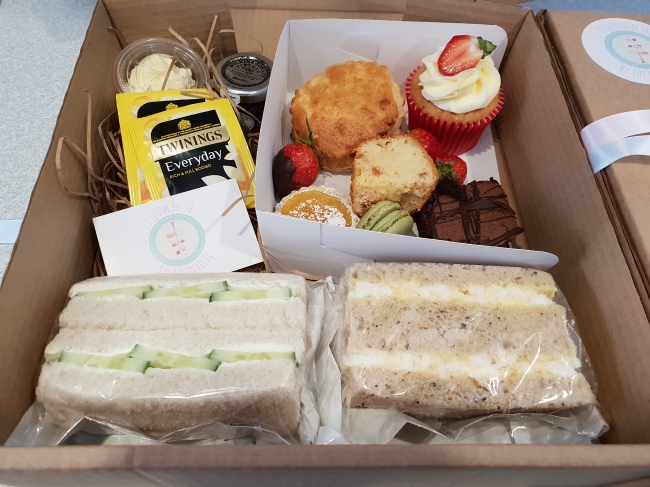 Parking and Access – This tea was taken in the inside area of the venue. There is one small step to enter the building. The toilet is up a flight of stairs with no alternative access. There is on-street parking available in front of the venue.

Background – A member of my family had pointed me in the direction of Afternoon Tea by the Mrs P’s some weeks ago. At the time, they did not deliver as far as us (they are based in the St Ives, Cambs area). However, a few weeks later I noticed a post online saying they were going to be trying a delivery to my area. I was straight on the computer, sending an e-mail to book a delivery.

Contents per person – Four rectangular sandwiches (Two each of egg mayonnaise and of cucumber and cream cheese). 1 large plain scone, a mini Tiptree jar of strawberry jam and a small pot of clotted cream. A cupcake, a macaroon, a square of lemon sponge cake, a mini lemon tartlette, a brownie and three strawberries, one of which had been dipped in chocolate. Two Twinings Everyday tea bags.

Comments – We were offered a choice of two delivery slots on the day we had booked our Tea for. The Afternoon Tea arrived nicely in the middle of the time slot well packaged in two brown cardboard boxes, one with a pink ribbon round it, the other with a blue ribbon round it. A nice touch! 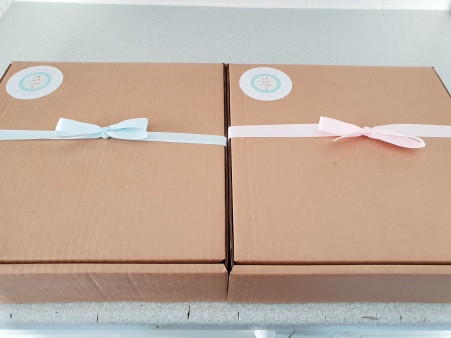 We opened the boxes up to find a well packaged selection of items. The cream and sandwiches were placed in the fridge for when we were ready to eat our Tea. 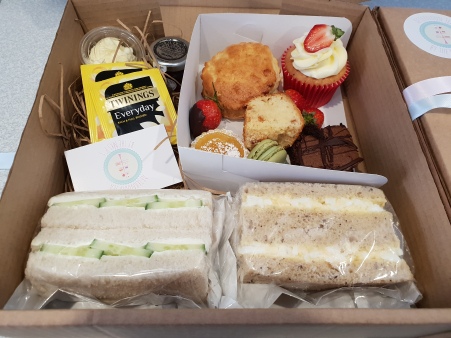 The table was laid with our white crockery with a blue line around the edge, along with a knife and a cake fork each.

The tea was made using the teabags provided. We used a yellow teapot with ‘fun loving kittens’ pictured on it. The milk was in a milk jug that matched the crockery. The tea was a good strength with a nice flavour.

The rest of the Afternoon Tea was served on our large round cake stand with two slate plates.

The sandwiches were large, freshly made and very well filled. They were on mixed brown and white bread, with the egg mayonnaise sandwiches on the brown bread.

The scone was large and fresh. We warmed it up in the oven, as suggested on the box. It was very tasty. 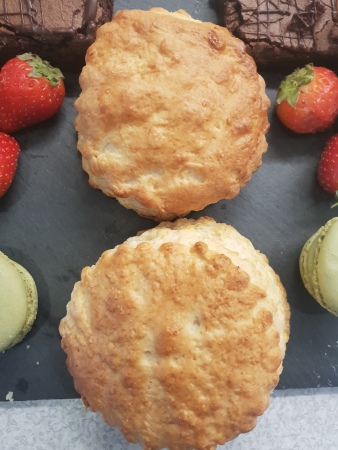 The Tiptree jam was just about enough for the size of scone but there was plenty of clotted cream.

Finally, the cake part of the Afternoon Tea had a good mix of items. The strawberries were a nice addition, particularly as one was dipped in chocolate. The macaroon was nicely chewy and the cupcake did not suffer from too much sweet topping. The lemon tartlette was tasty. As was the piece of lemon cake, though I would have liked more of the cake which was delicious. Lastly, the brownie was really yummy. It was moist and delicious and was not too small! 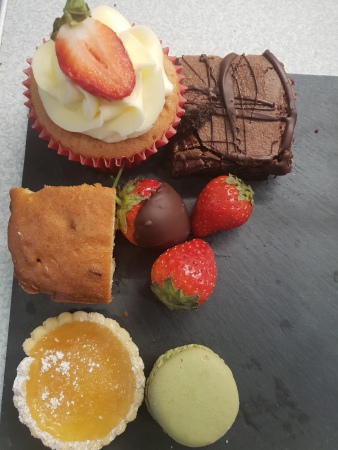 I have based my service score on the service we received, as usual. It was friendly, efficient and helpful. 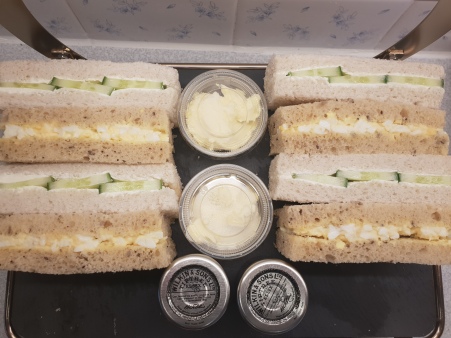 I was able to pay online for the Tea and it arrived perfectly on time, very well packaged.