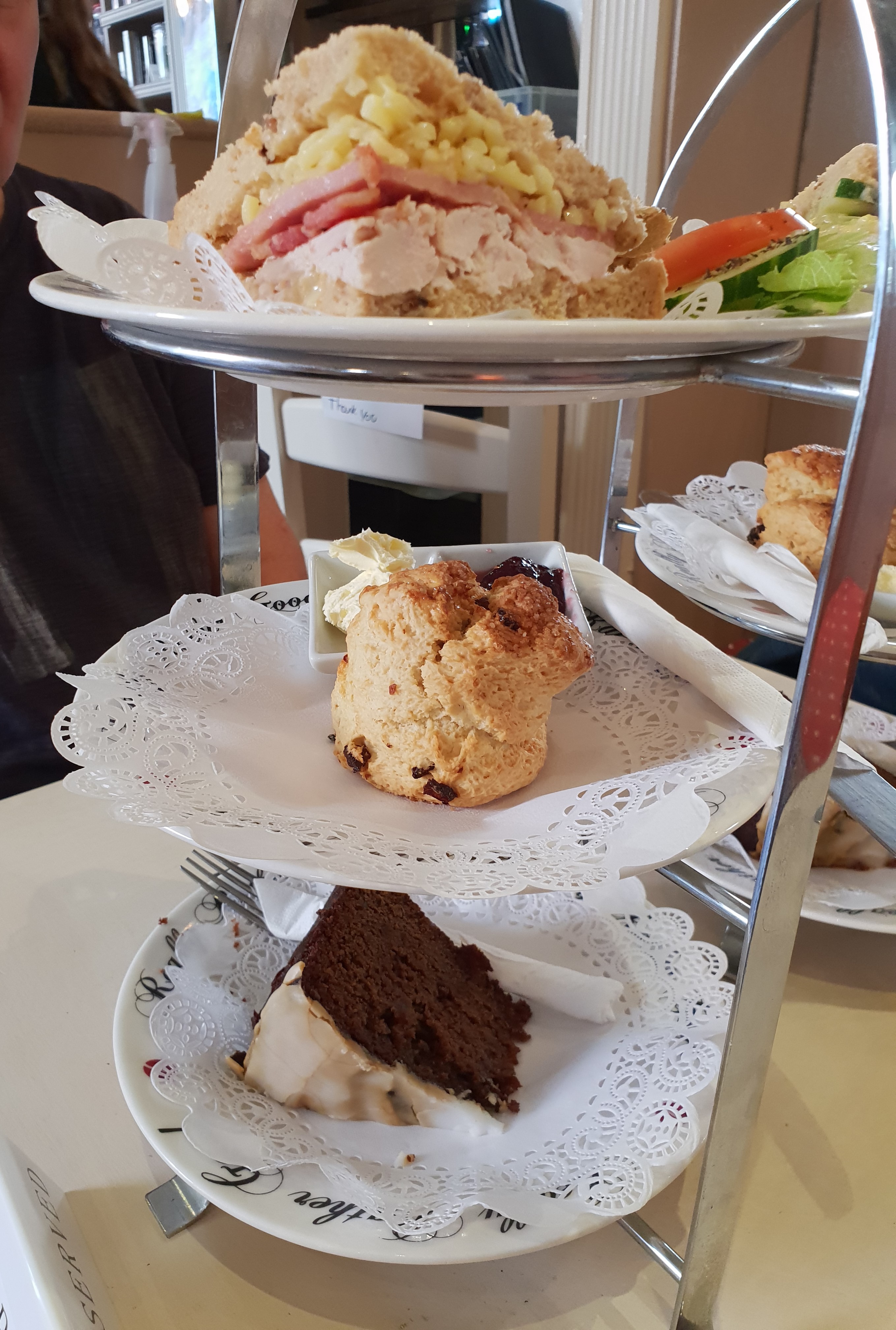 Parking and Access – The café is found at the bottom of Abbeygate Street. The Angel Hill car park is right next to it. Access to the café is via a couple of steps. However, there is some outside seating available during good weather, on the street outside. There is usually a toilet available. However, it was closed when we visited, due to the coronavirus pandemic. The toilet is down a set of stairs. 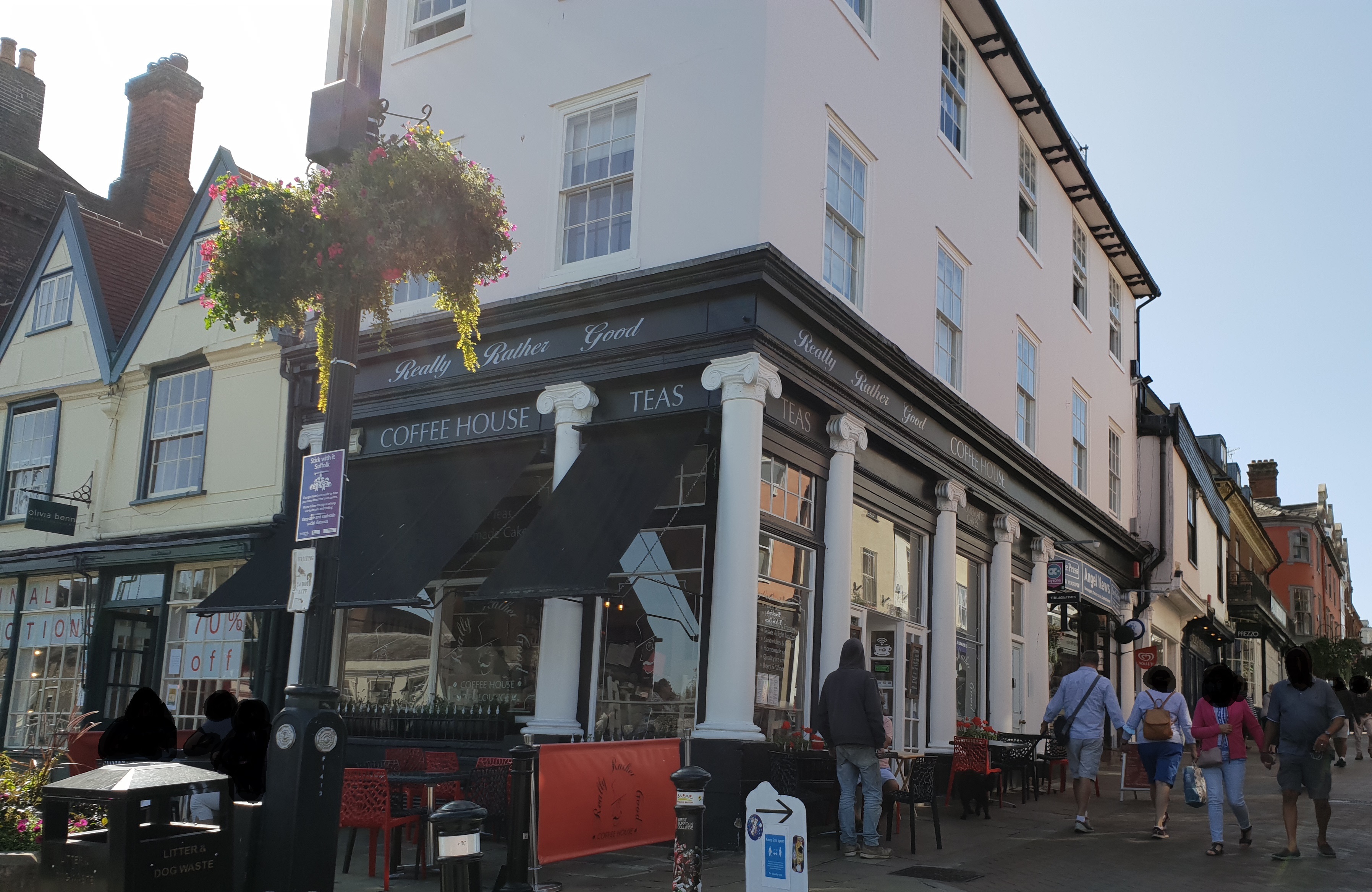 Background – We are regular visitors to the beautiful town of Bury St Edmunds, due to family connections. We had seen the Really Rather Good café before, but had never been inside. We were looking for an Afternoon Tea to try in the area (there are several!), and found that the café offered one, so we decided to try it.

We booked ahead on the telephone, paying a ten pound deposit to secure the reservation.

Contents – Four triangular sandwiches from a large choice from the menu (we chose coronation chicken and chicken, bacon and cheese). A large medium sized fruit scone, a dish of raspberry jam and a dish of clotted cream. Your choice of one slice of any of the available cakes or traybakes on the day (we both chose sticky ginger cake). Pot of your choice of tea or a small coffee.

Options Available – There are no options available for this Tea.

Comments – We had booked an inside table on the advice of the café, who told us it can get quite busy in the outside area. The tables were reasonably well spaced out but the staff were not wearing any masks. The table was rather sticky, but the waitress told us it was due to the sanitiser they were using reacting with the varnish on the table.

We were given a menu, and asked for our choices of sandwiches and cake.

The Afternoon Tea arrived on a three-tier cake stand each, with round, white plates with the name of the café around the edge.

Each plate was topped with a paper doily. 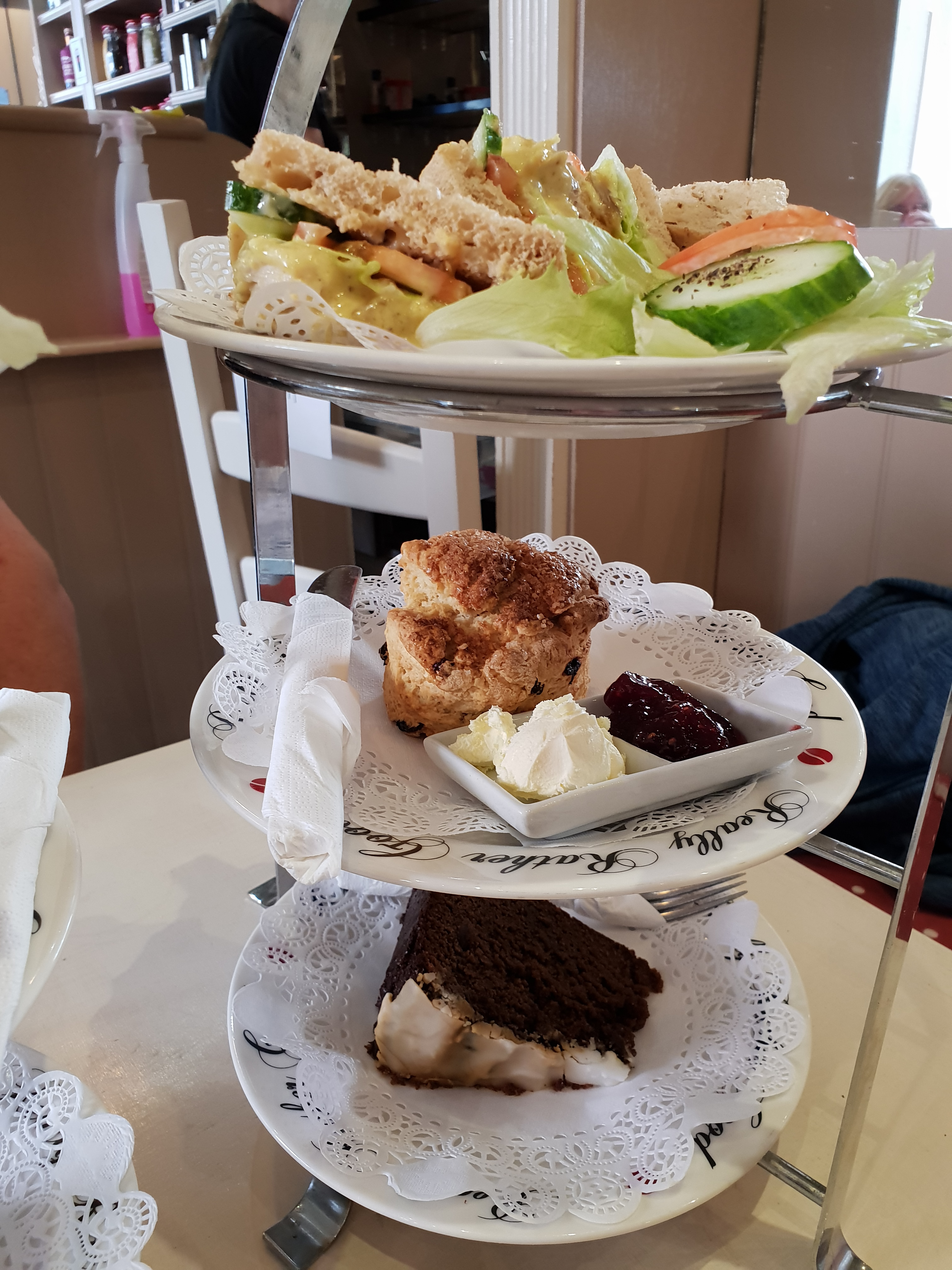 The tea arrived some time later in a round blue teapot along with a white jug of hot water and a smaller white jug of milk. The tea was of a good strength and there was plenty of it, with the extra jug of water. 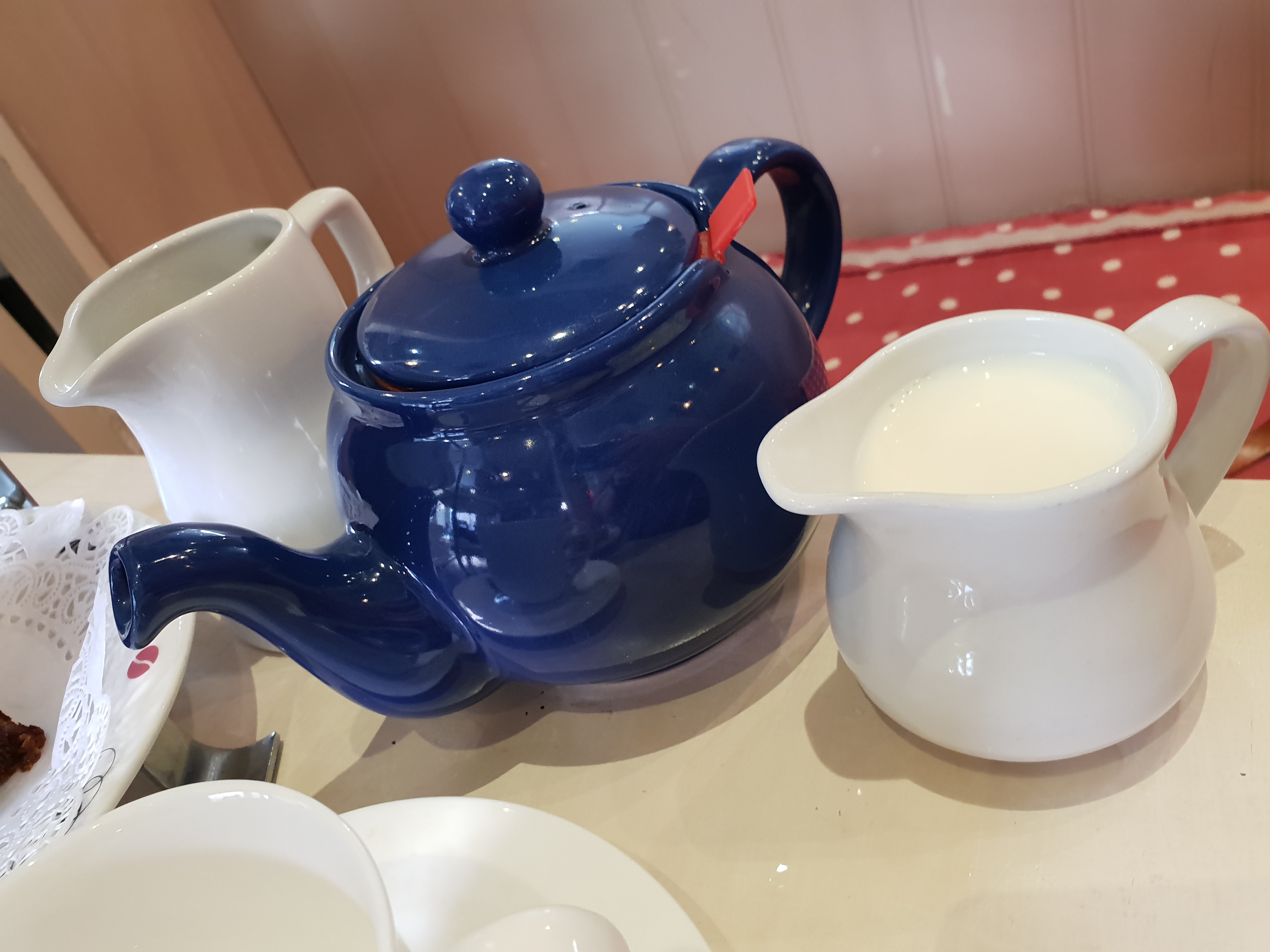 The sandwiches we chose arrived with a small amount of salad. We decided to share them so that we each had two of each filling. We had been offered a choice of granary or white bread and had both chosen granary bread.

The sandwiches were freshly made and were very well filled. They were delicious. The chicken, bacon and cheese sandwiches were unusual and turned out to be a really good choice. The bacon was warm. Definitely yummy! The coronation chicken was also very tasty. 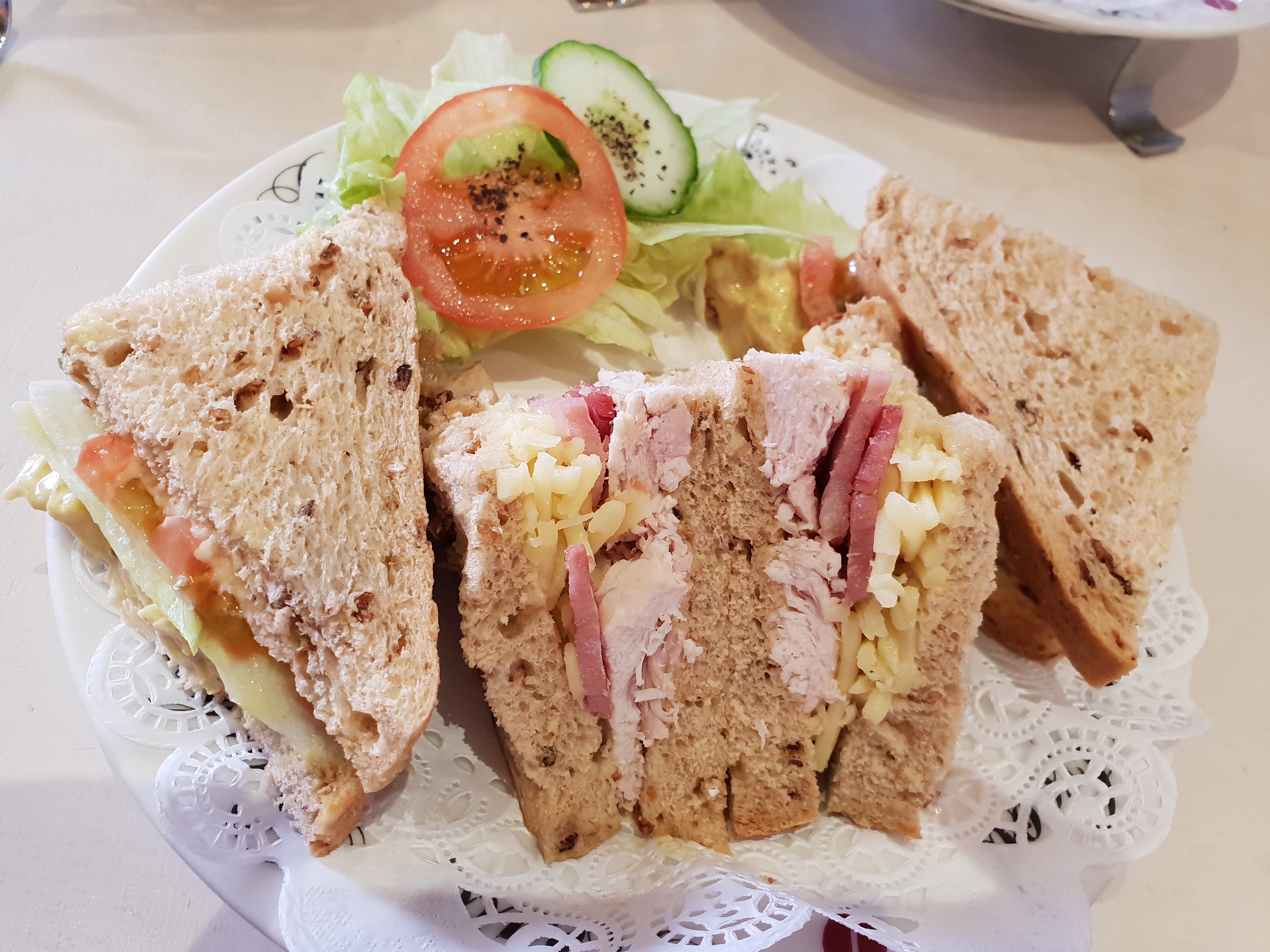 The scone was a good size and had been warmed up. It was fresh and tasted very good.

The menu mentioned that the jam was from Wilkins and son, and the cream was from Rodda’s. However, they were both in little square dishes. There was only just enough of both jam and cream. 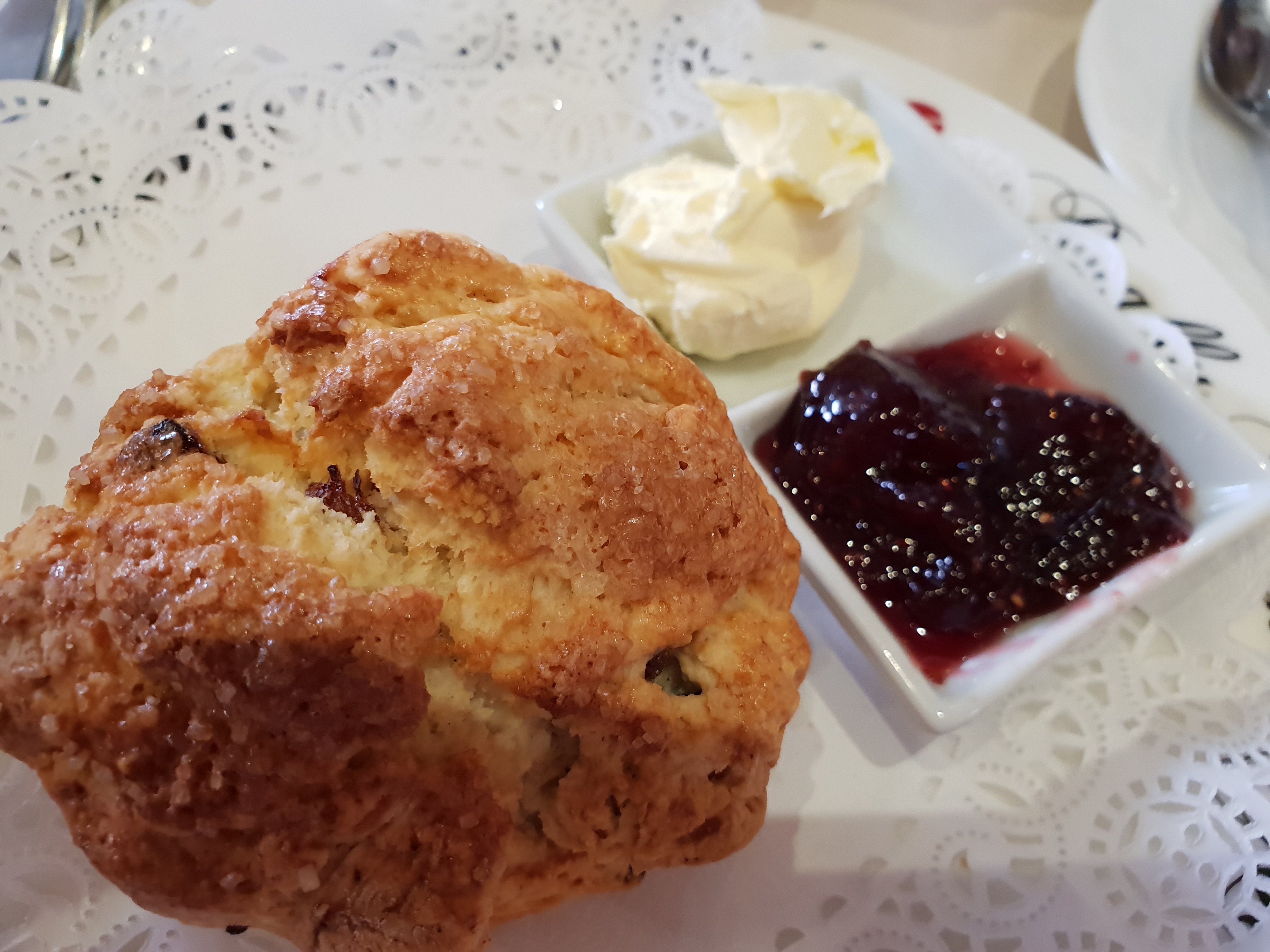 We have always rather liked an Afternoon Tea where you were able to choose a slice of cake, so this Tea was right up our street. There was a good choice of both cakes and traybakes, 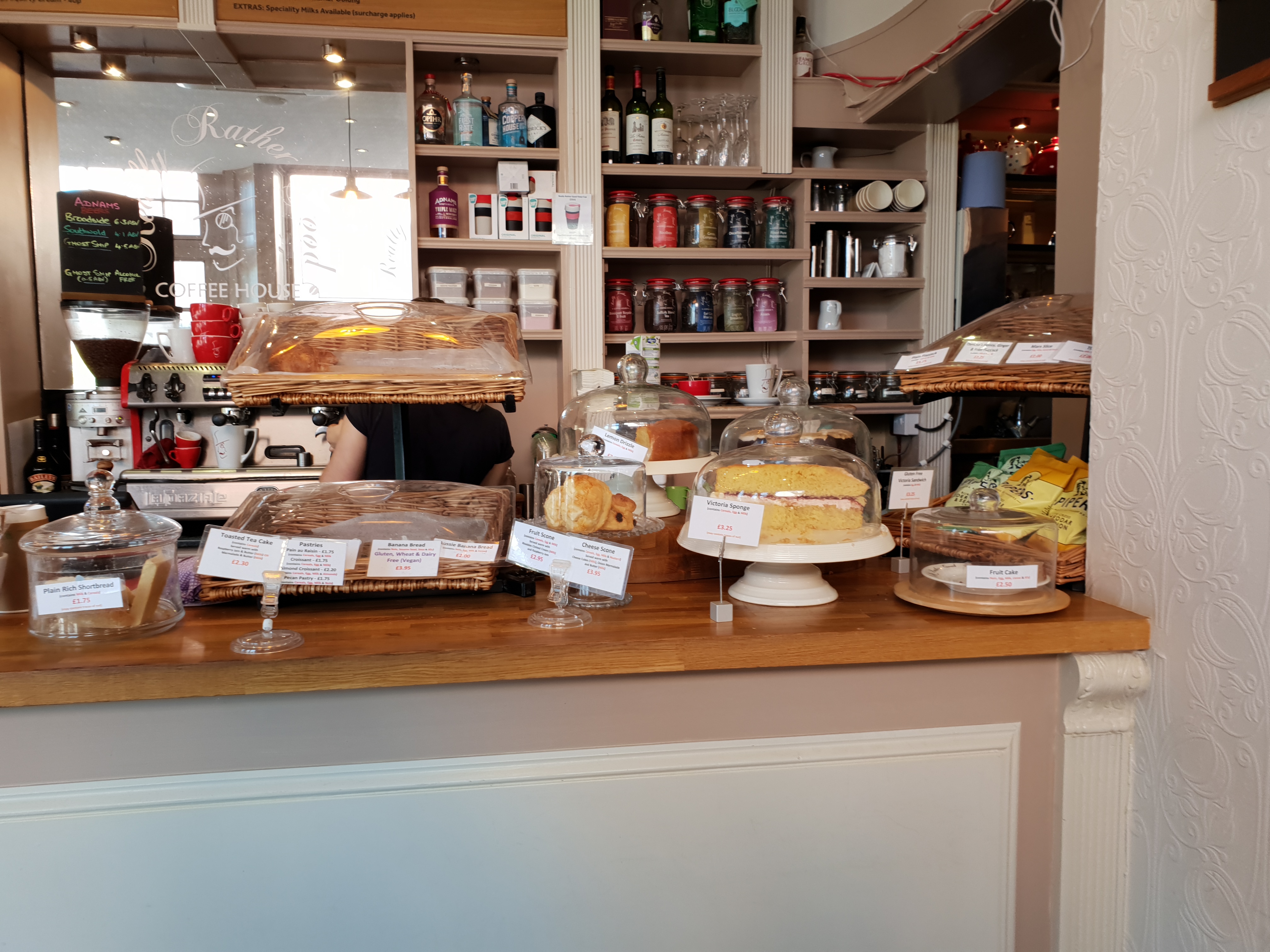 but we both decided we would like a slice of the sticky ginger cake. We were given a good-sized slice of cake each. The cake was really good and contained bits of stem ginger within it. It was fresh and moist and we both enjoyed it. 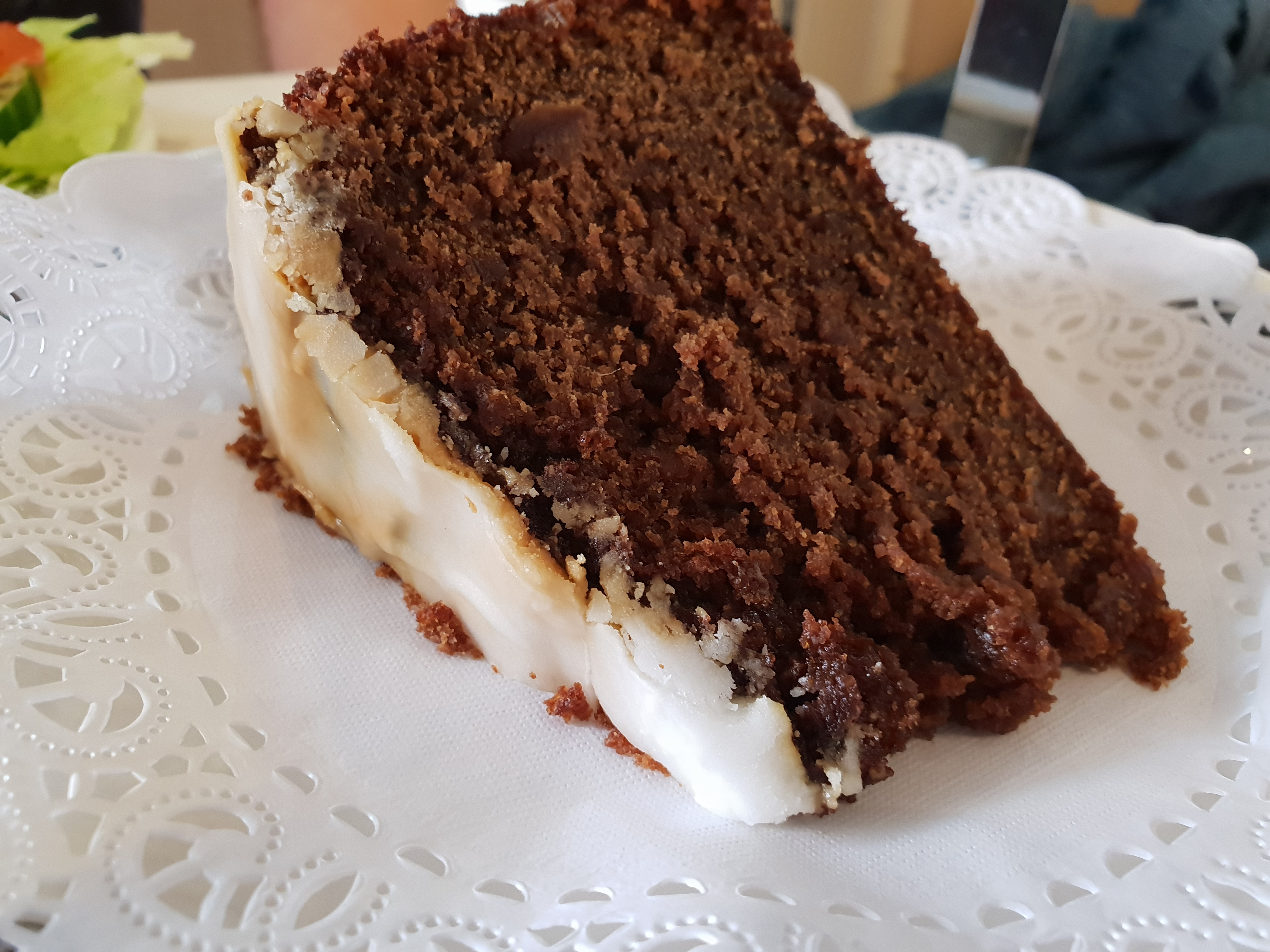 Service was fairly attentive and helpful.