Parking and Access – There is a large car park in the front of the hotel. 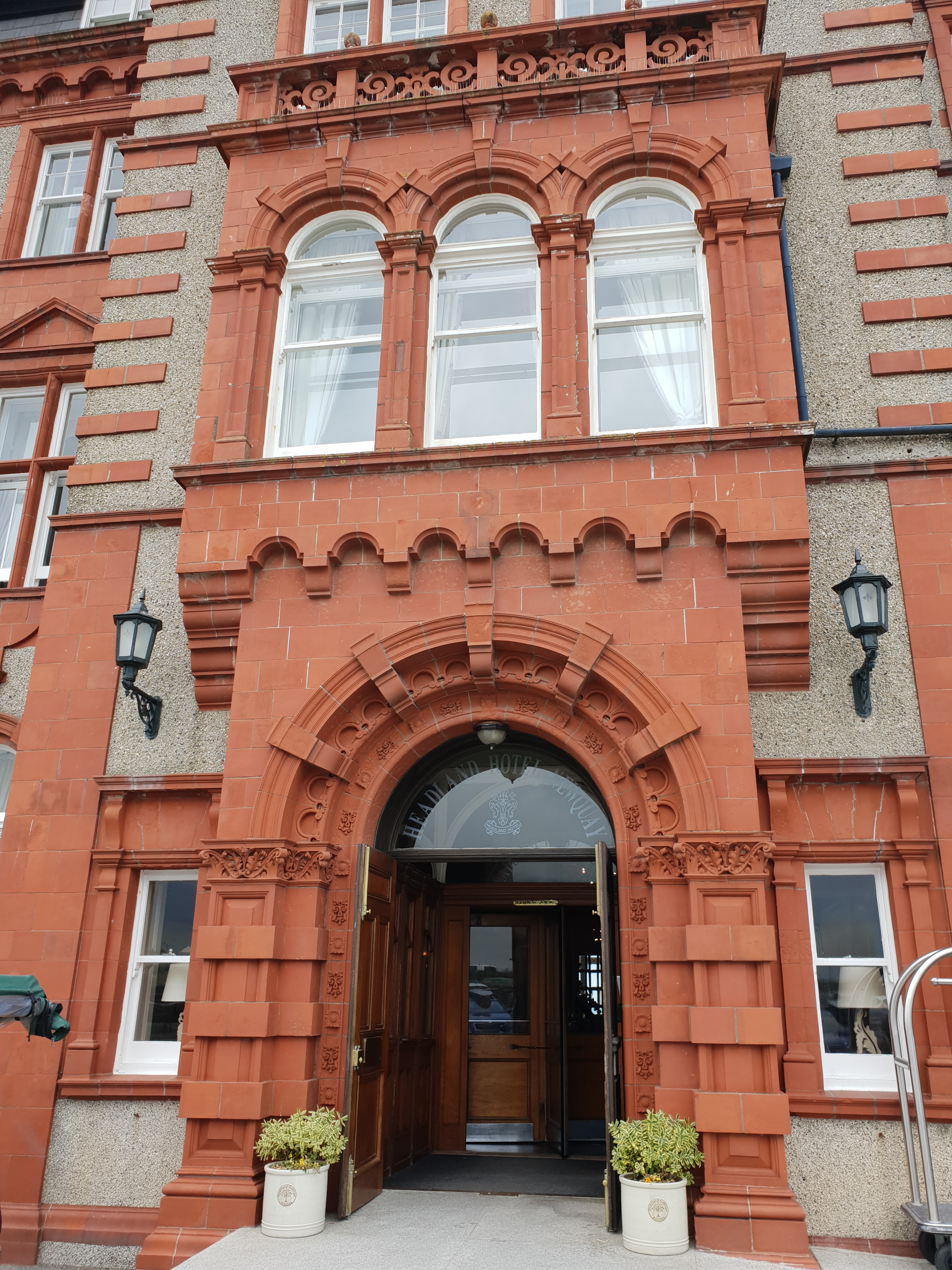 Once inside, the large restaurant is just a short distance from the entrance and is on the level with the entrance. 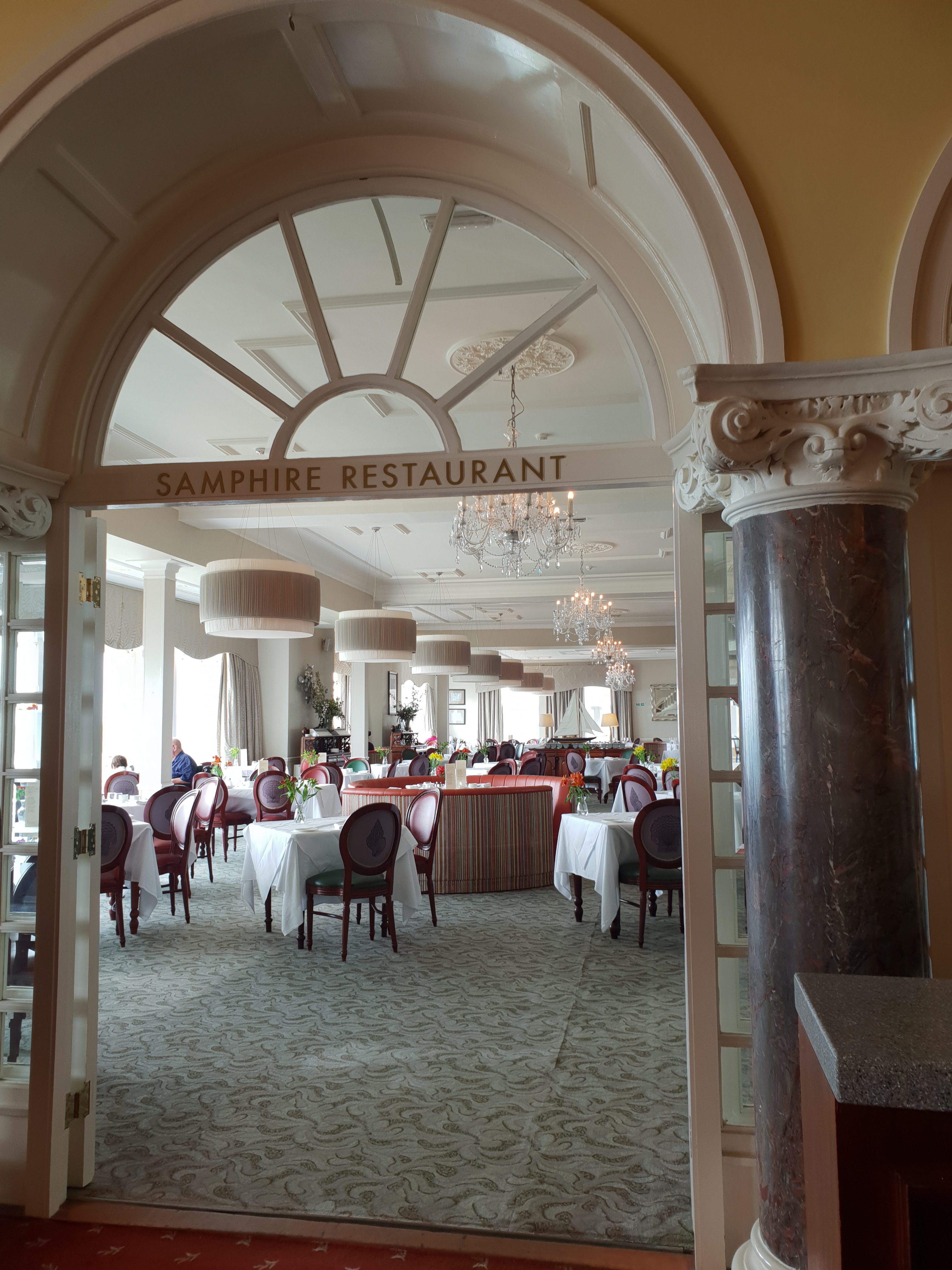 The ladies’ toilets were situated near the entrance to the hotel, with flat access.  However, the men’s toilets were on the floor below. Lift access was available but I did not try this out.

Background – Having spent many holidays in Cornwall in the past, I had always longed to stay at the Headland Hotel in Newquay. It is situated on a headland, overlooking the famous Fistral Beach, where the best surfers go.

I still haven’t stayed at the hotel; we had a cottage in nearby Padstow. However, an Afternoon Tea there was possibly the next best thing!

We booked in advance, for four people on this occasion.

Contents per person – four rectangular sandwiches (one egg mayonnaise, one cheese and chutney and two smoked salmon with cream cheese). One small/medium plain scone and one small/medium fruit scone, a small amount of strawberry jam and a small amount of clotted cream. One raspberry and rose macaroon, a tiny lemon polenta cake, a tiny raspberry tartlette and a chocolate and peanut butter mousse blob. A pot of tea or coffee.

Options available – There is also a ‘free from’ version of the Afternoon Tea available.

Comments – On arrival at the hotel, we were first shown to the restaurant by the hotel’s concierge. Then we were shown to a table reserved for us in the restaurant by one of the waiters. The table was by the large windows, overlooking the sea and Fistral Beach. The tables were placed a good distance apart, which helped us to feel safe during the pandemic. There were a few other tables in use, all by the windows.

The table was laid with white linen napkins containing a knife and fork each, on top of a round white plate. There was also a white teacup and saucer each and a small glass.

We were asked for our drinks order soon after arriving. We all chose English Breakfast tea, with the exception of one, who ordered a glass of milk instead. We were also offered still or sparkling water for the table. We chose still water. This arrived shortly after in a Headland Hotel bottle. 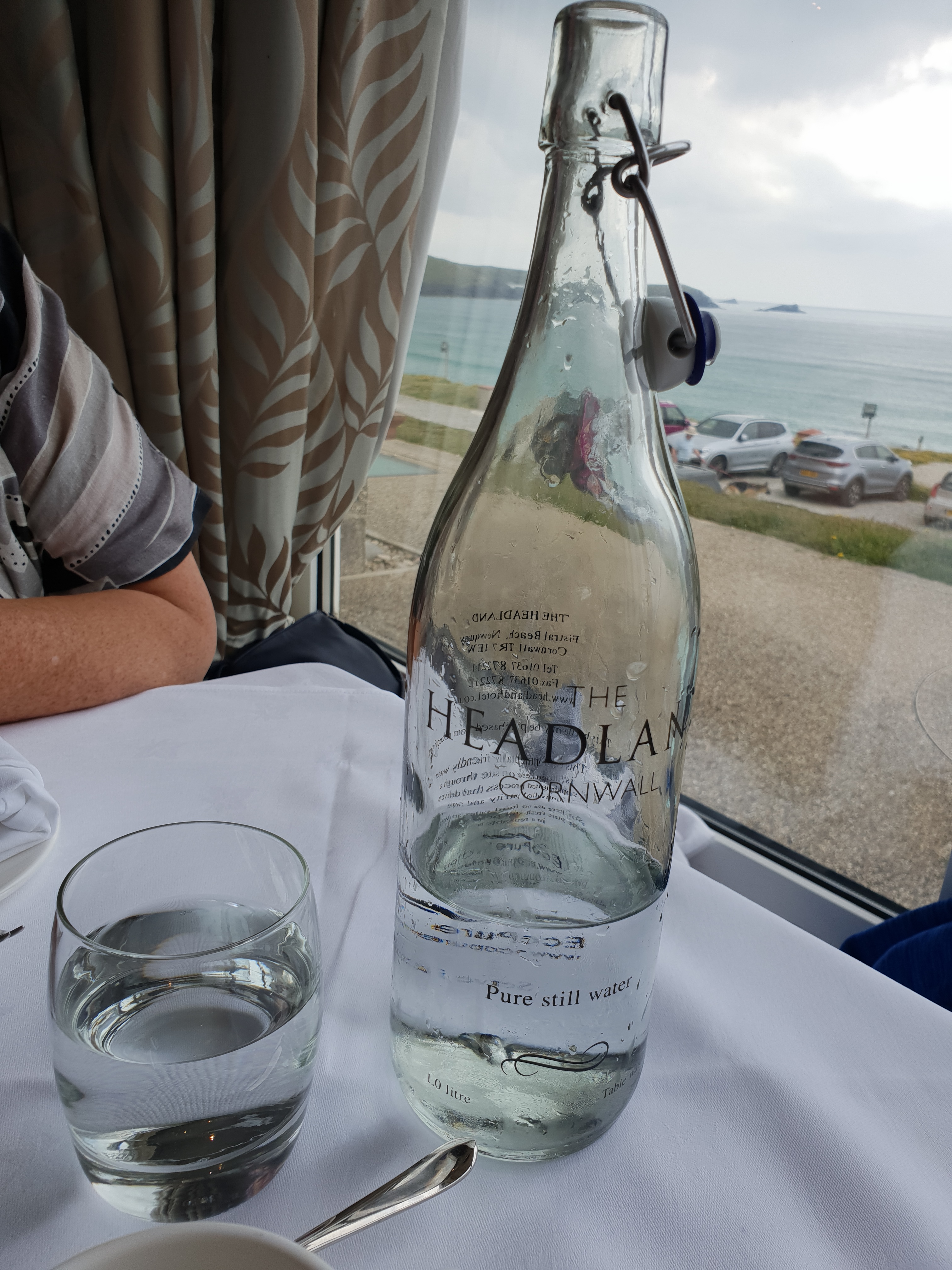 The rest of the drinks arrived soon after. The tea arrived in a two, non-matching, white teapots. One was a pot for one, the other a pot for two. Each teapot was also accompanied by a white jug of milk.

The tea was made with loose leaf tea. It was about the right strength for all of us. A tea strainer was also provided. We were offered a refill whilst we were eating our Tea. We asked for one of the pots to be refilled. 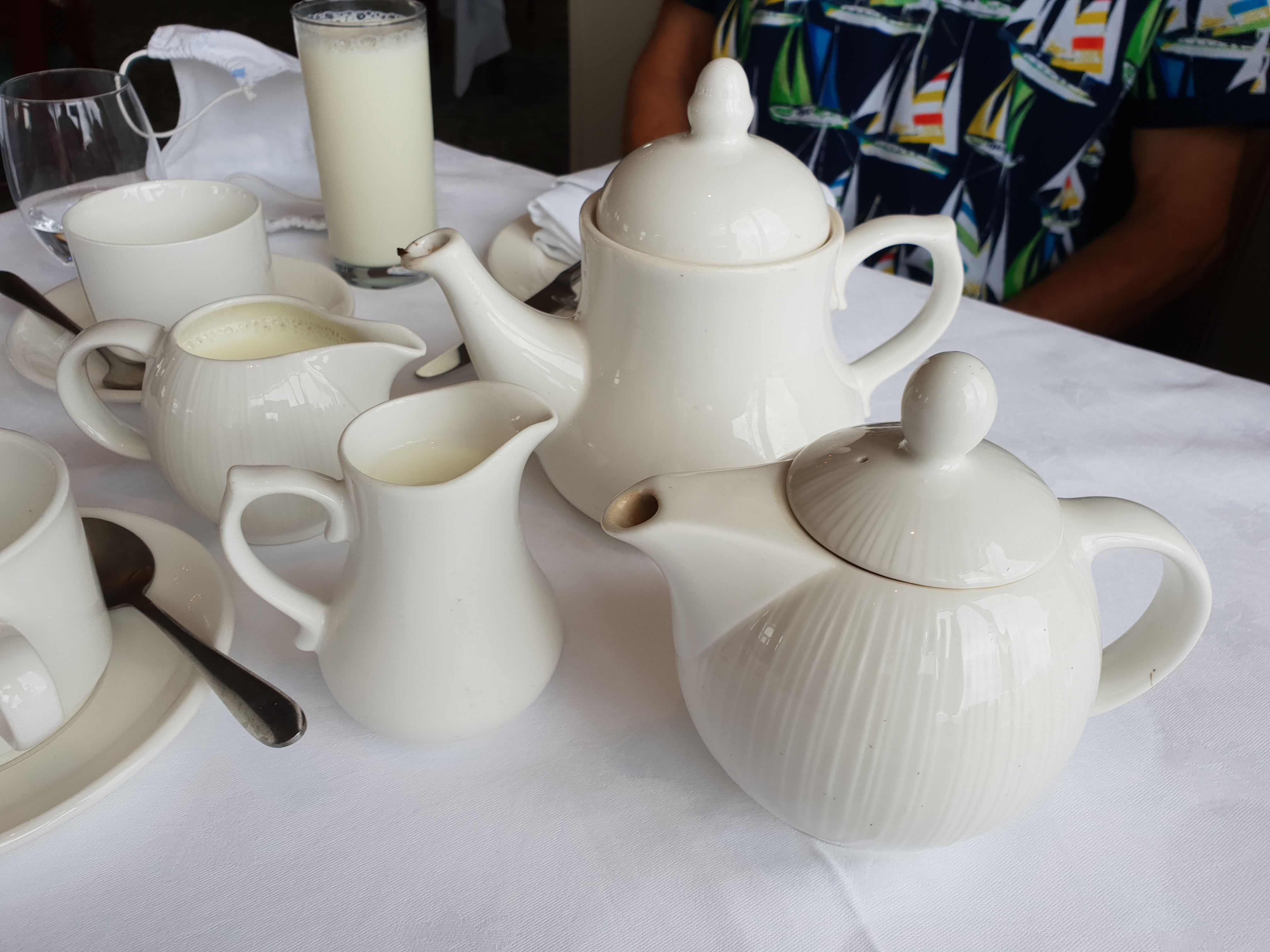 The Afternoon Tea arrived shortly after the drinks on a three-tier cake stand for each couple, with round white plates.

When we had booked our Afternoon Tea, we had put in our usual request for no mustard to be added to the ham sandwiches. Strangely, this resulted in us receiving no ham sandwiches at all. Instead, we were given two smoked salmon sandwiches each. This was a bit of a shame as, whilst I like smoked salmon, it is my least favourite of the sandwiches on offer for this Tea. I always find it slightly annoying that they can’t manage to put something else with the ham, when you ask for them without mustard. Chutney was available – it was in the cheese sandwiches! Or, just give us plain ham, which is what a lot of places do.

The sandwiches were on a mix of brown and white bread and were freshly made. They were all well filled. 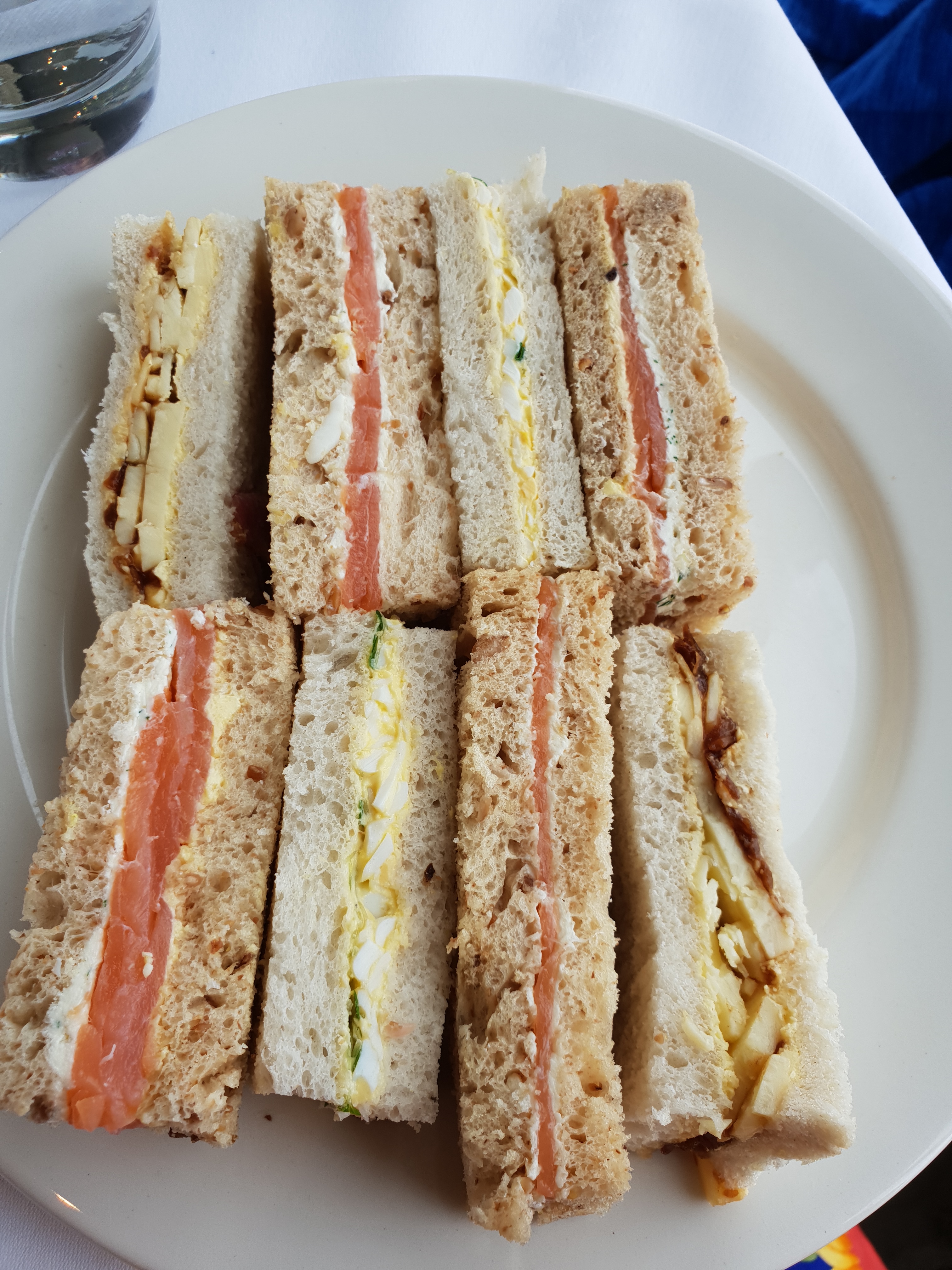 However, another mini annoyance of mine is that a big, fancy hotel like this goes with such standard sandwich fillings. Maybe they feel that this is what their customers expect. If so, then why not add some small savoury item that makes it a little bit different to everywhere else?

The small/medium sized scones had been warmed up. They fruit scones contained a reasonable amount of fruit and both were nicely fresh.

One of our party does not like cream (I know – how can that possibly be?!?). We asked for some butter instead but we were given a tiny catering pack of Flora!

There was barely enough jam for the two, quite small, scones each. There was definitely not enough clotted cream for them. However, as there were three of us eating the cream meant for four, we just about managed. 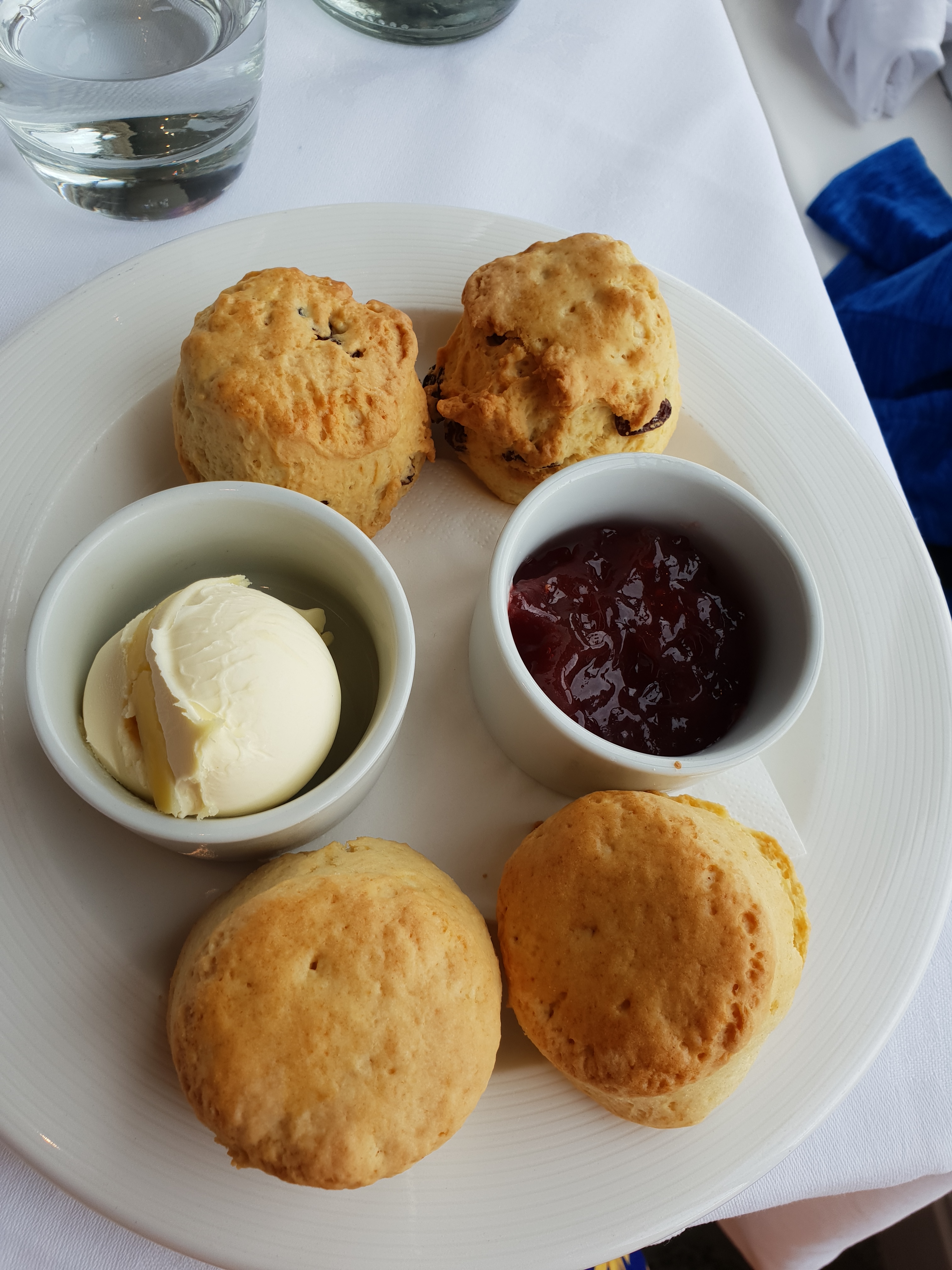 All of the cakes were very small. The macaroon was nicely sticky and the raspberry centre was delicious. The lemon polenta cake was barely one tasty bite big. The raspberry tartlette was actually smaller than the macaroon! Finally, there was an interesting chocolate and peanut butter blob on a crisp base, which was delicious. This was bigger than the other three items, but was still very small. All of the cakes were freshly made.

Service was very good, as you would expect from a good hotel. The staff were friendly and helpful, whilst unobtrusive.

We all enjoyed our Afternoon Tea overlooking the sea outside, watching the surfers. However, I would still like to stay at the hotel one day. Especially on a wild and windy winter’s day. Maybe one day…….