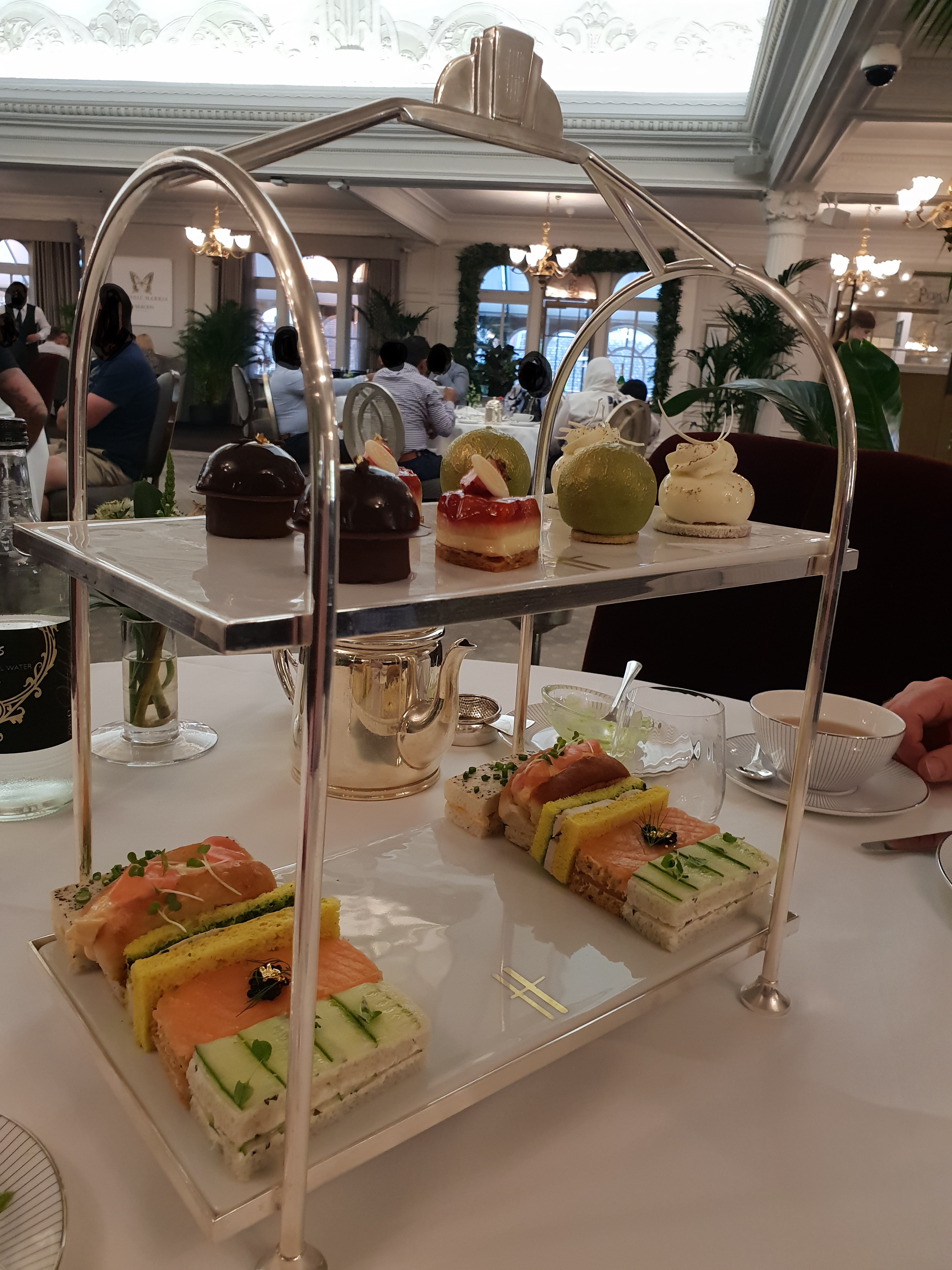 Parking and Access – This is a central London venue. Parking in central London is at a premium. There is not a lot around and what there is, is expensive. The best way to reach Harrods is by bus, underground or taxi. We travelled by bus, which stopped a short distance away.

The Harrods Tea Rooms are found on the fourth floor of the Harrods store. It can be reached using one of several sets of escalators or lifts. There are plenty of both. Stairs are also available. It is possible to access the Tea Rooms without steps. 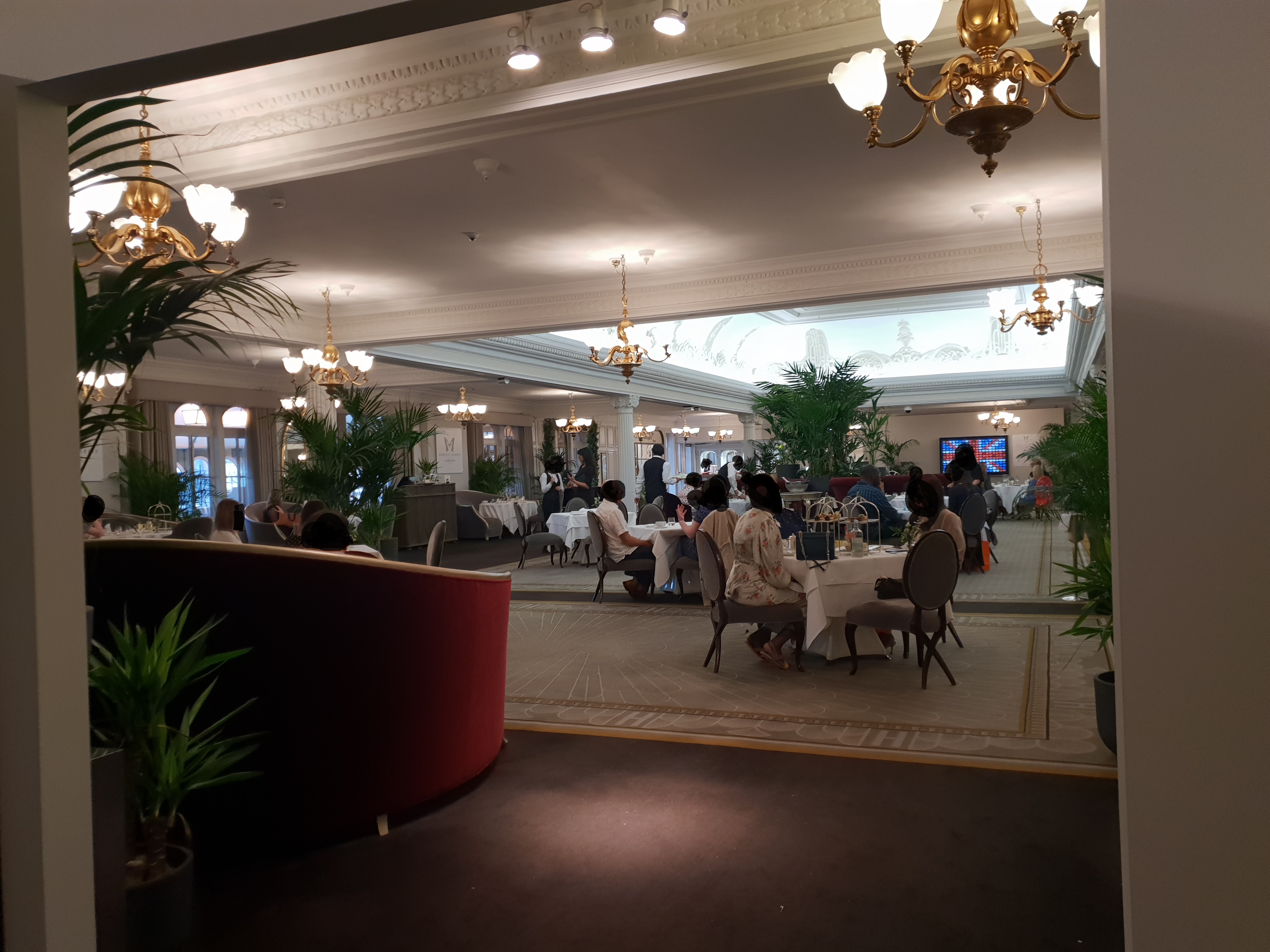 There are some rather nice toilets available

on the fourth floor, again without steps. 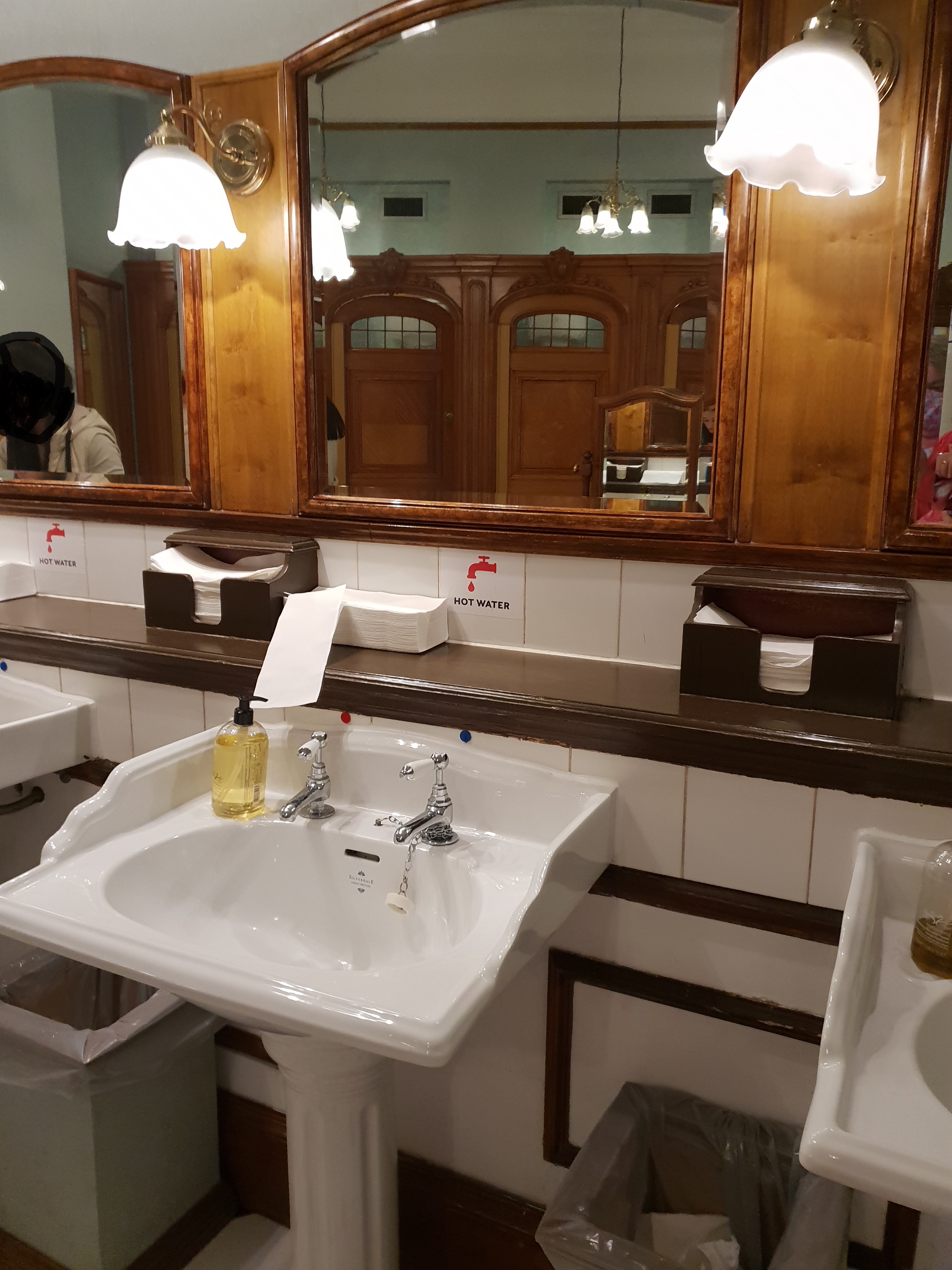 However, I believe the men’s toilets on this floor were accessed via some steps up. There is also a disabled toilet on this floor.

Contents – Amuse-bouches of asparagus and pea topped with a mint ice. Four rectangular sandwiches (cucumber with mascarpone cream on white bread, coronation chicken on turmeric bread, smoked salmon with lemon and dill cream cheese on tomato bread and egg mayonnaise with truffle butter and chives on white bread) and a lobster roll with radish. A medium sized plain scone, and a medium sized fruit scone. A pot of strawberry jam, a pot of raspberry jelly and a pot of clotted cream. A vanilla and coconut blob, a lime and white chocolate ball, a chocolate textures blob and a strawberry millefeuille. Your choice of tea from six pages of tea menu. 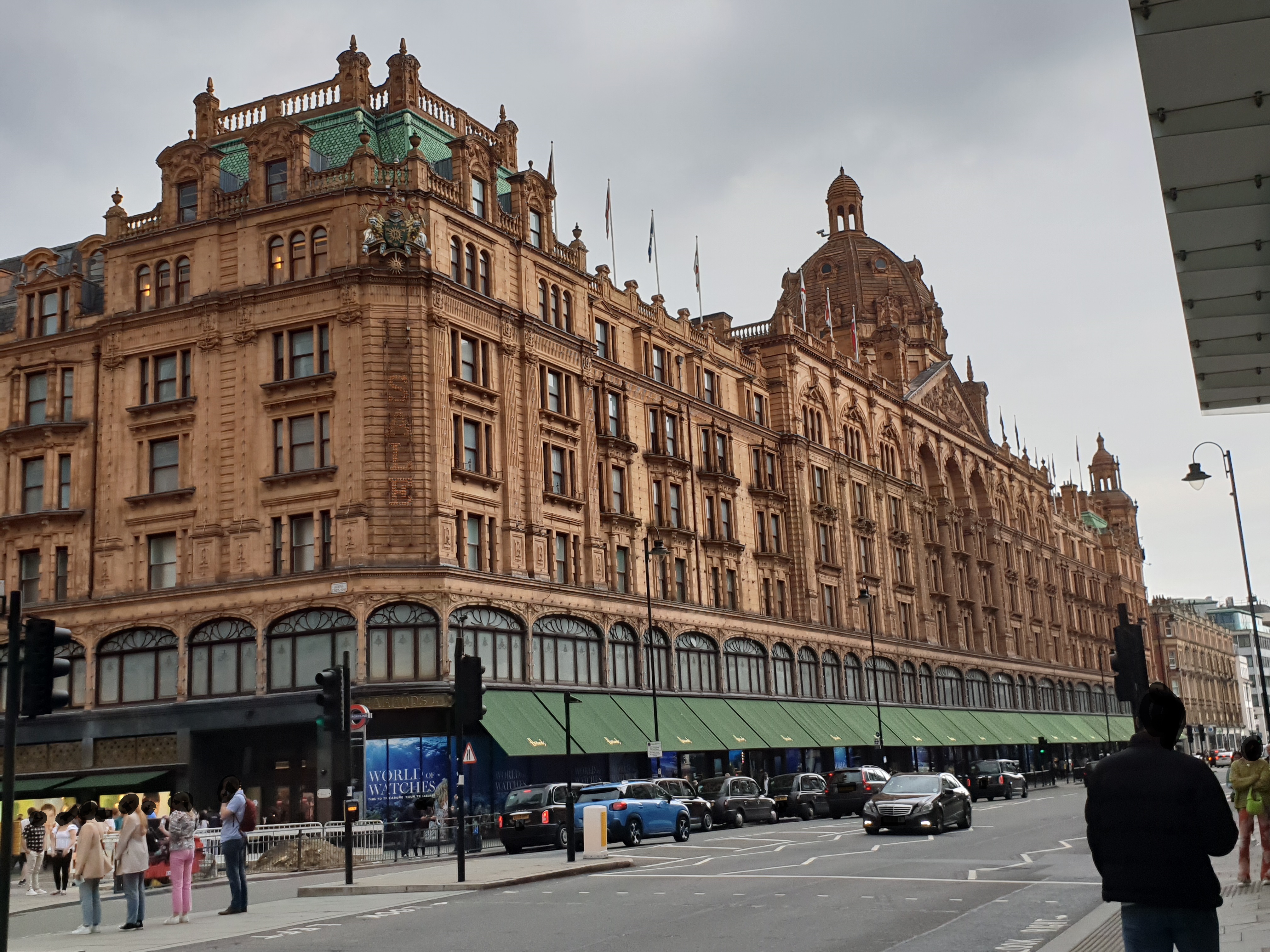 Comments – We arrived at the wrong end of the Harrods Tea Rooms, and were directed to the other end, where a desk was standing. Once we had checked in for our reservation, we were shown to a large round table set for two on the edge of the room. The seating was on a comfy banquet, which was quite difficult to get into without taking the table cloth with you!

The table was laid with a white linen table cloth. The plates had an interesting but simple design with lines radiating out from the inside to the outside, with a plain white centre and edged in silver. 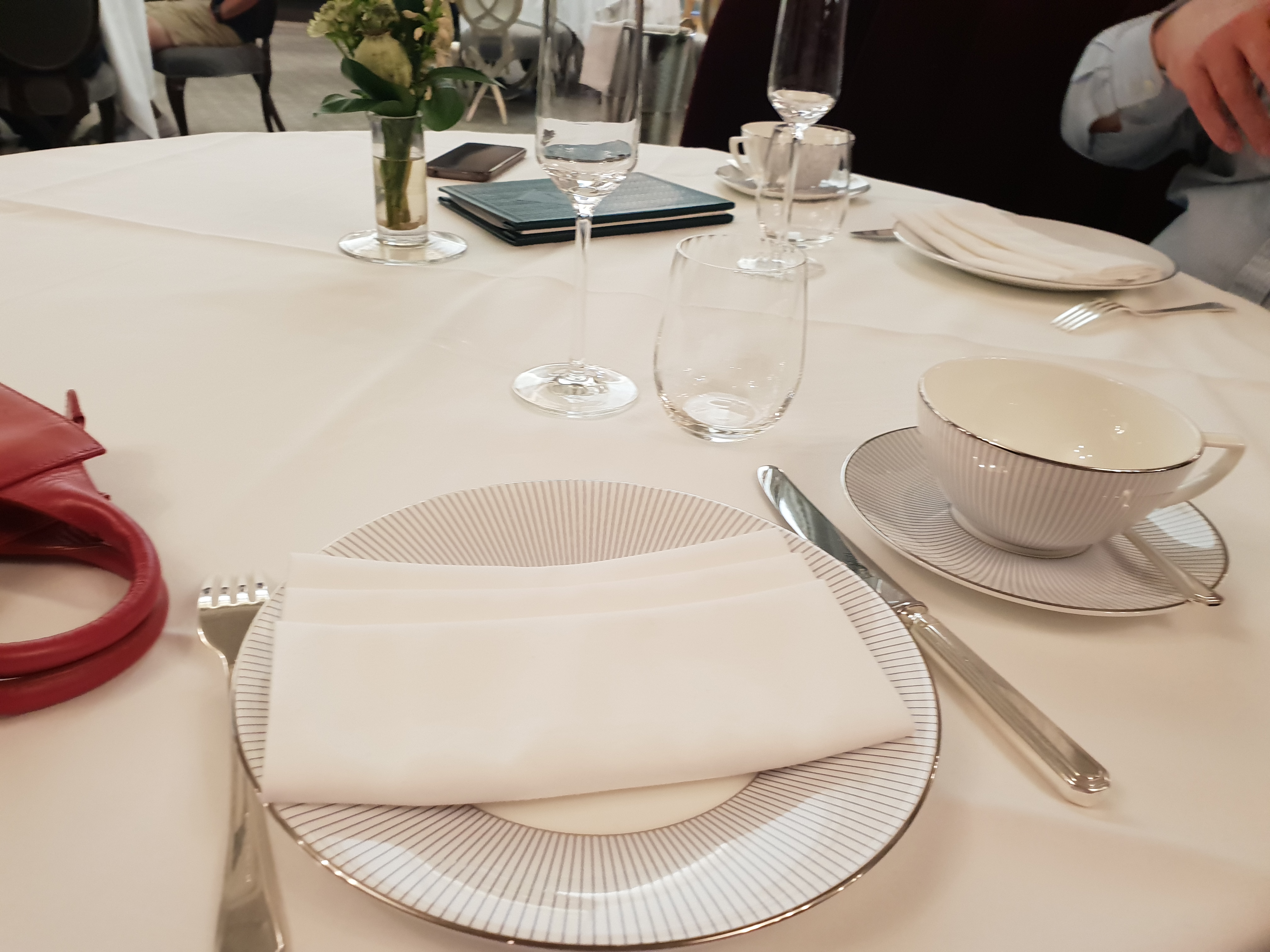 The teacups and saucers matched the plates. The table also had a dessert knife and fork each, a champagne glass and a tumbler. silver tea strainers. 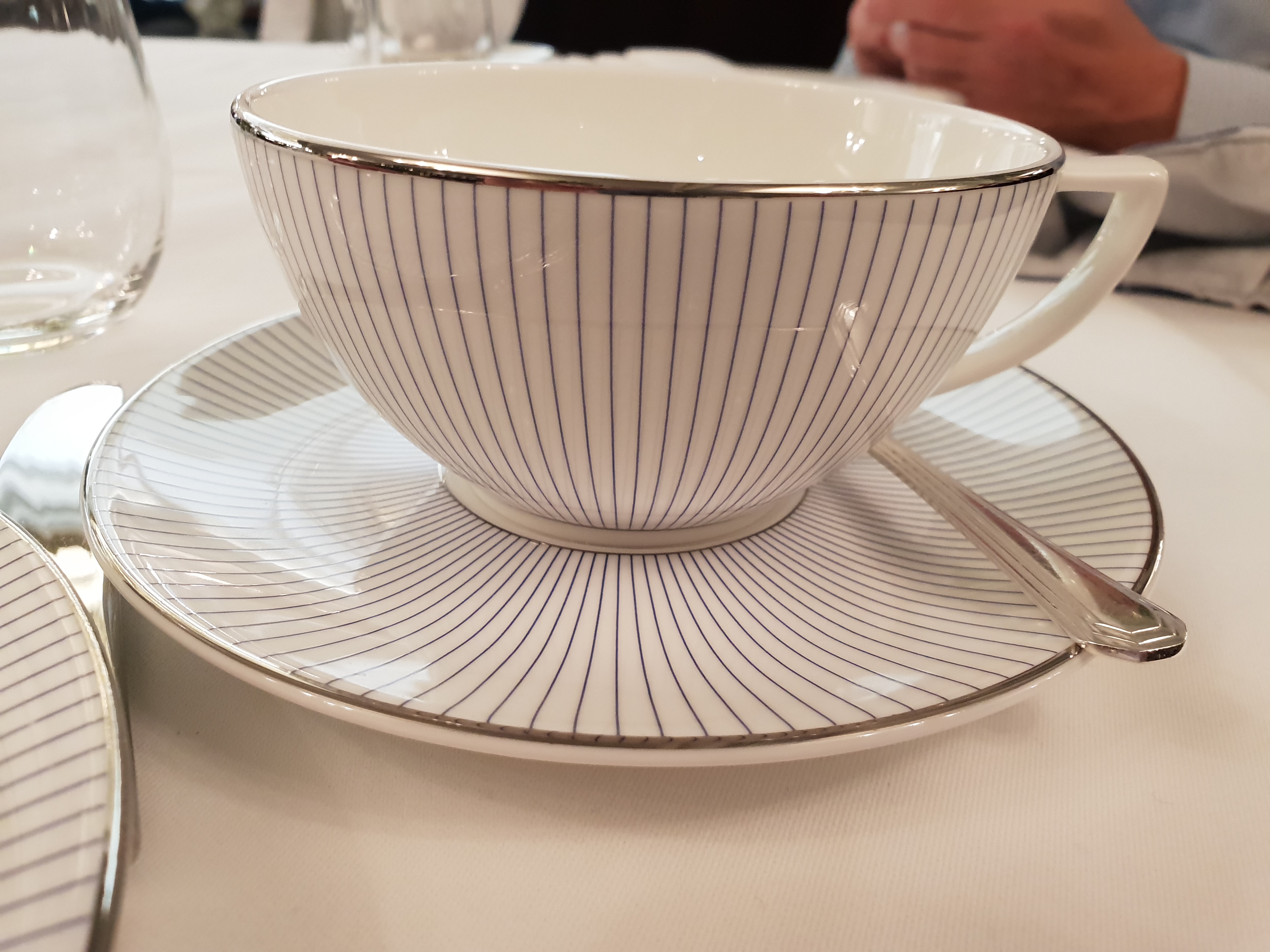 There was also a small floral display on each table. 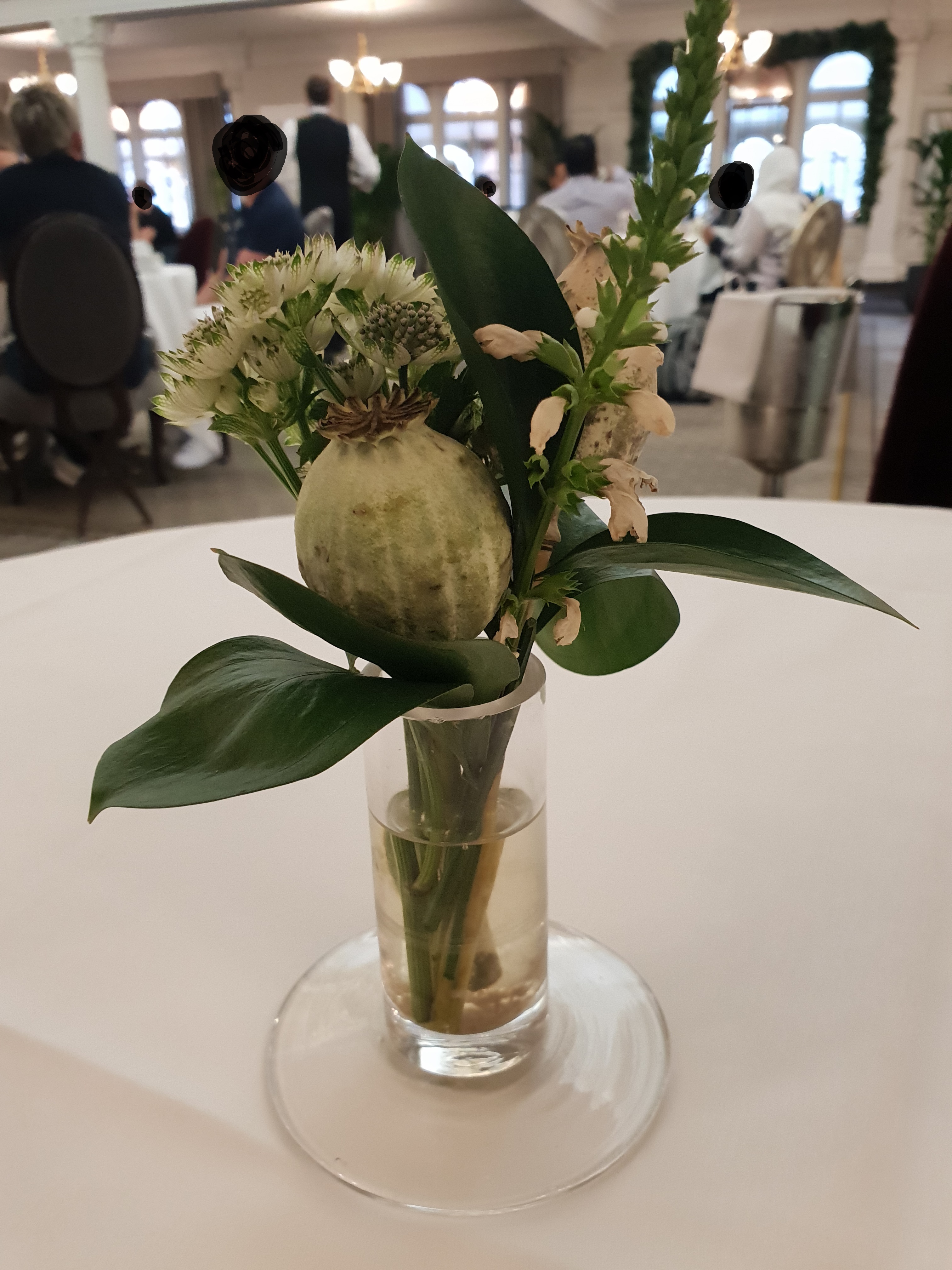 We were both given menus to choose our tea from. We both chose Harrods Afternoon Special blend to drink. We were also offered some iced water.

The water arrived first in a Harrods branded bottle. We were poured a tumbler full each by a waitress. 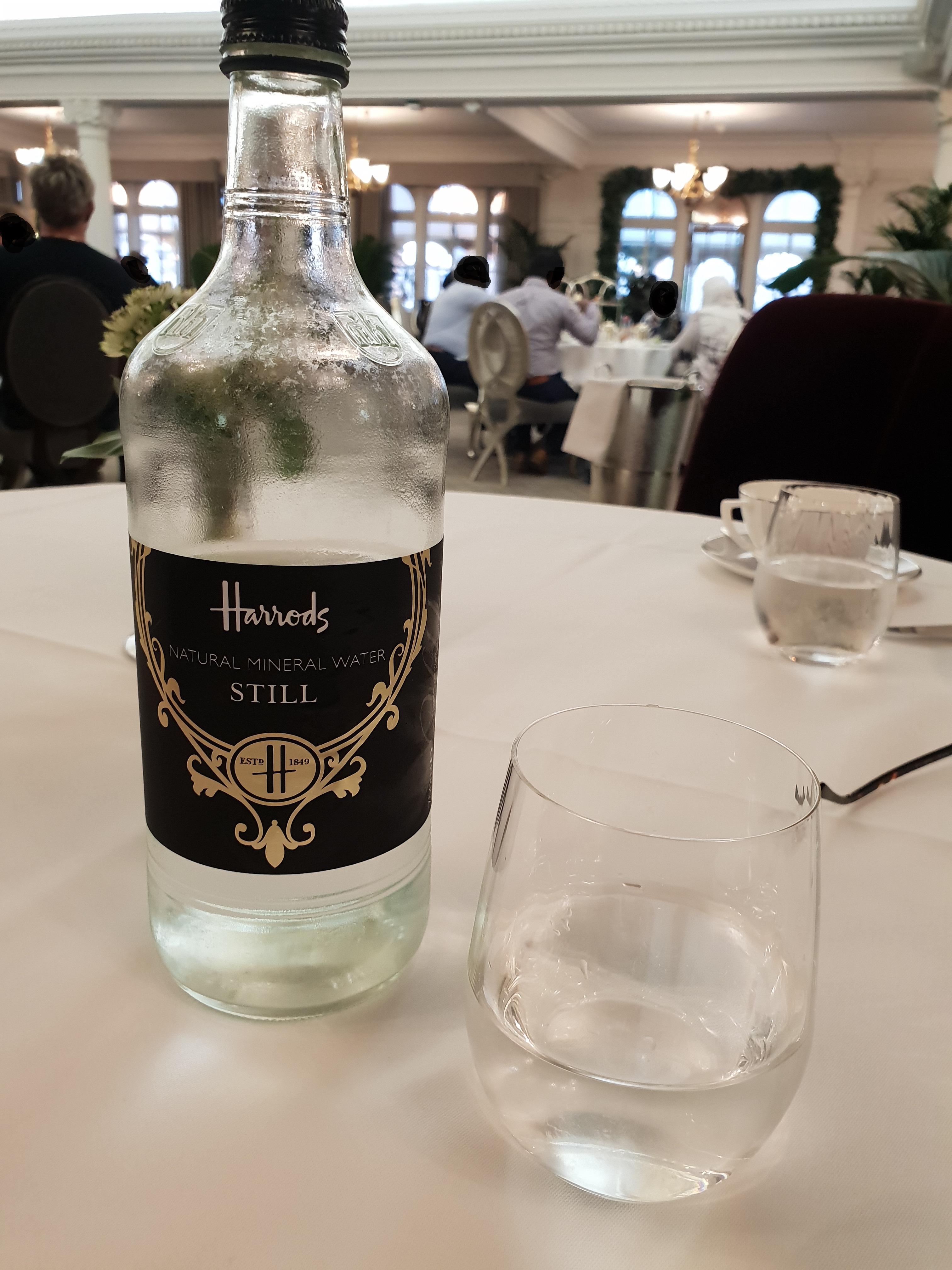 We were then given our amuse bouches in a little glass dish. This turned out to be a sort of thick puree made from asparagus and peas, topped with some ice, which turned out to be garden mint flavoured. It was very tasty, though I did remove the frozen mint ice from the top. It was an unexpected extra to the Afternoon Tea. 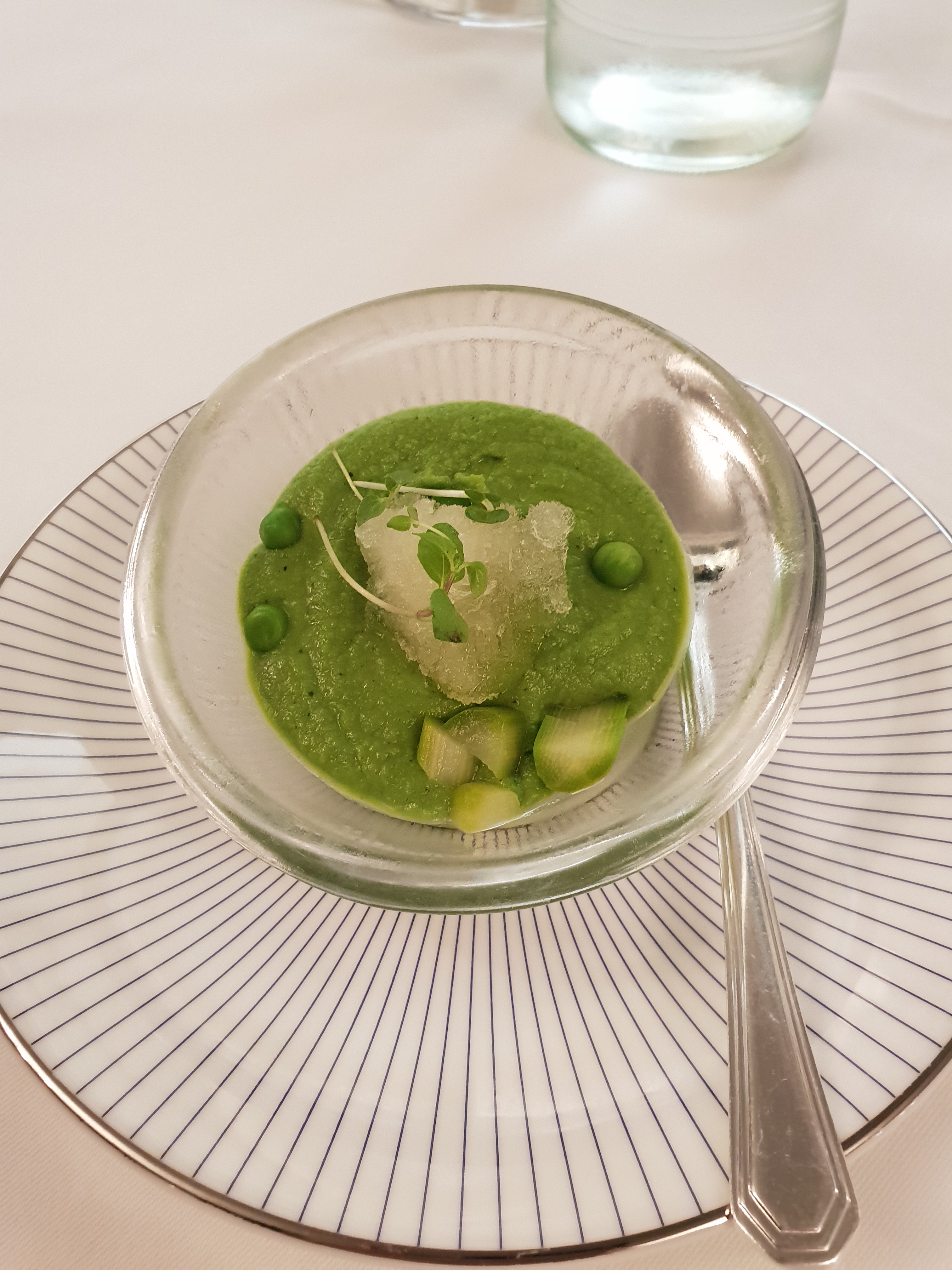 The tea arrived in a heavy silver teapot accompanied by a silver jug of milk and a tea strainer. We were each poured a cup of tea. The tea was loose leaf. It was mainly poured by the waiters, but we did also pour some ourselves. We were offered a refill when the pot was getting empty. This time we were brought a pot each! 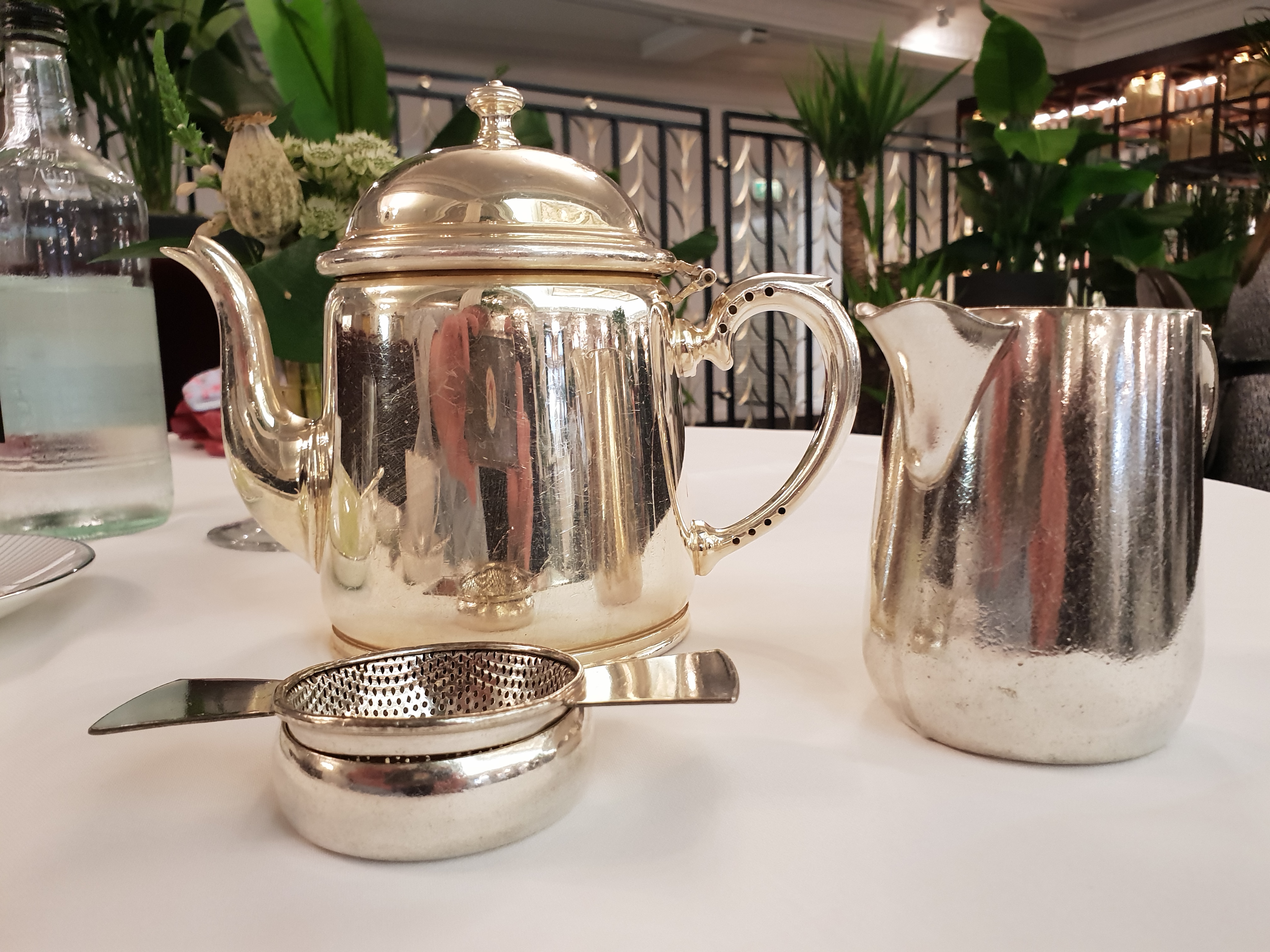 In a twist to the normal way of serving Afternoon Tea, the savoury and the sweet courses arrived together on a rectangular, two-tiered cake stand. The layers were two white glass platters with the Harrods ‘H’ symbol on them. The top of the cake stand also had a Harrods ’H’ on the finial at the top. In this tea room, the scones arrive after you have finished the sweet course.

The sandwiches were all beautifully made and decorated. 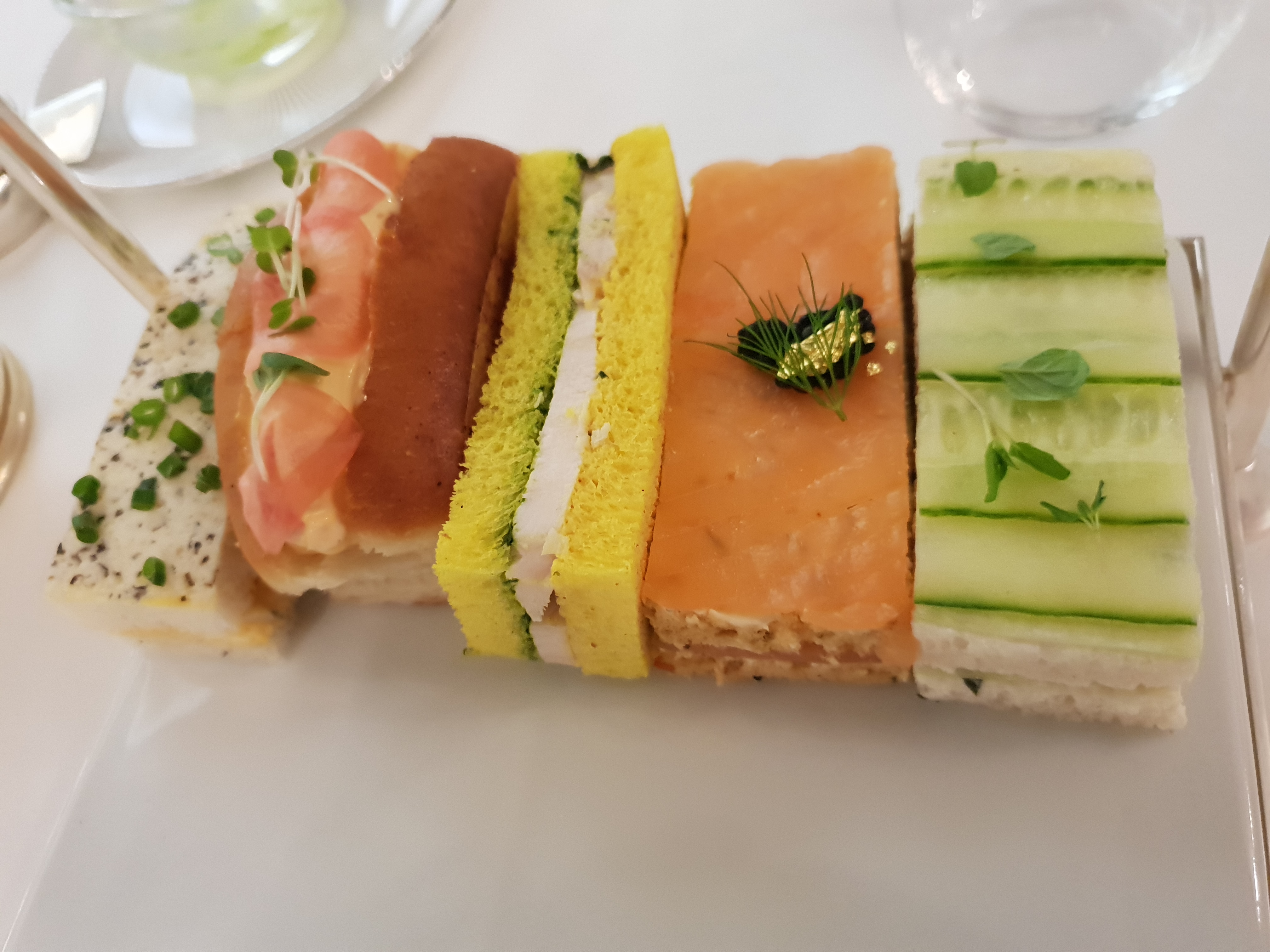 The cucumber sandwich was particularly good. 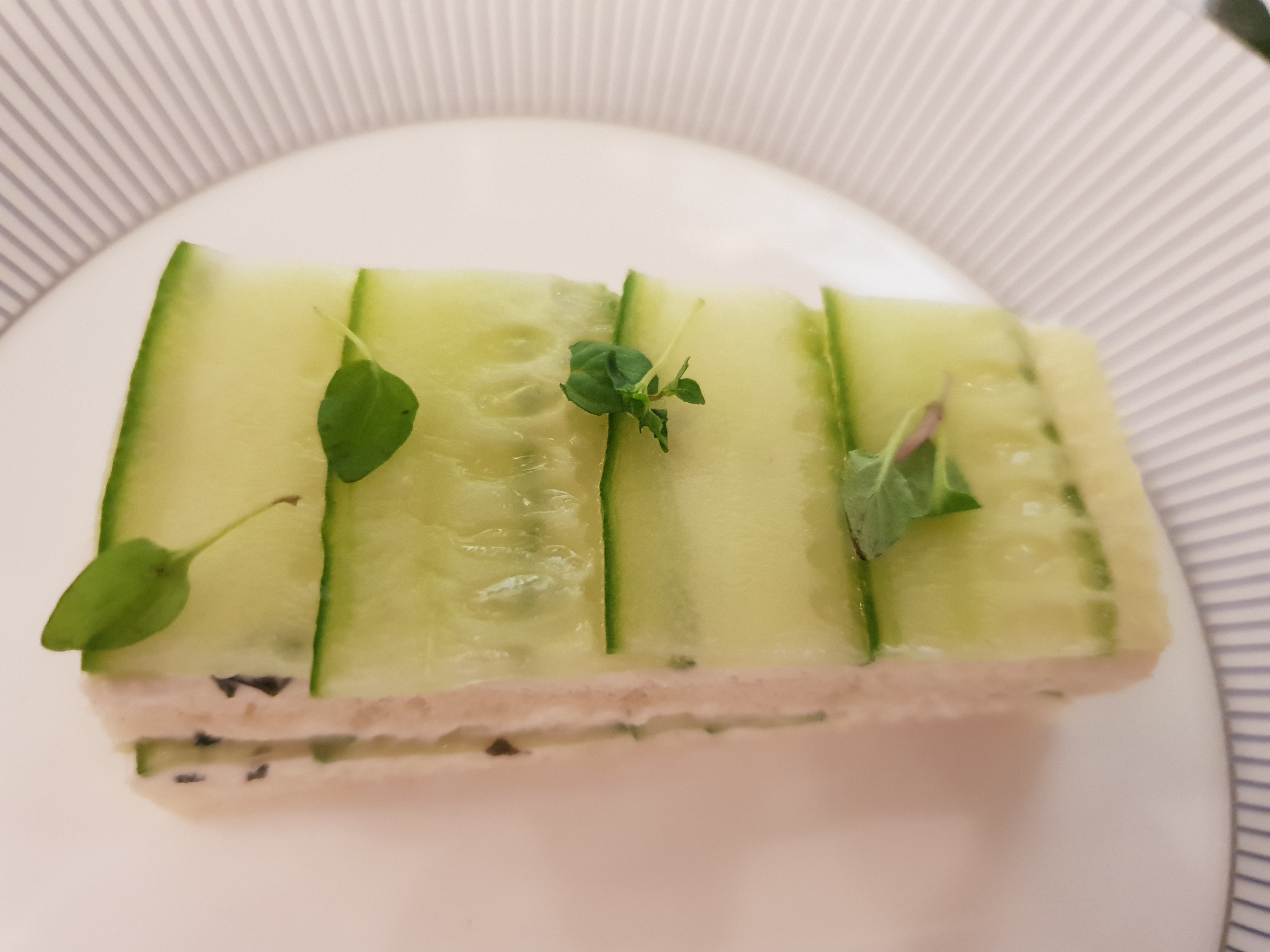 The lobster roll was a brioche roll with a split in it, with the lobster in the split. 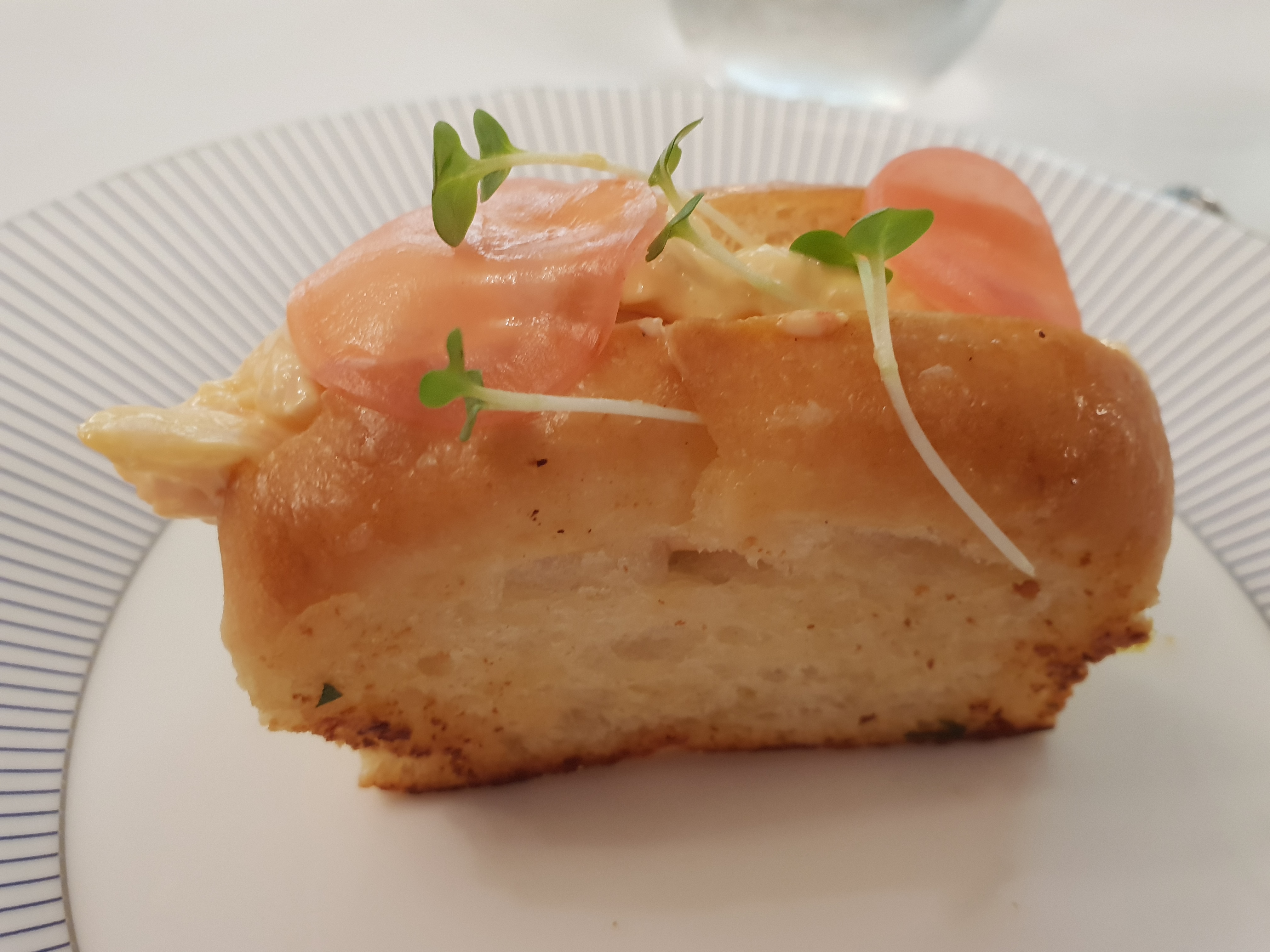 My companion didn’t like the truffle butter in the egg mayonnaise. However, I thought it was interesting and very tasty. The sandwiches were all, as you would expect, freshly made and well filled. We were asked if we would like any more of any of the sandwiches. We asked for an extra cucumber and a coronation chicken sandwich each.

The ‘cakes’, none of which were actually cake, were delightful! 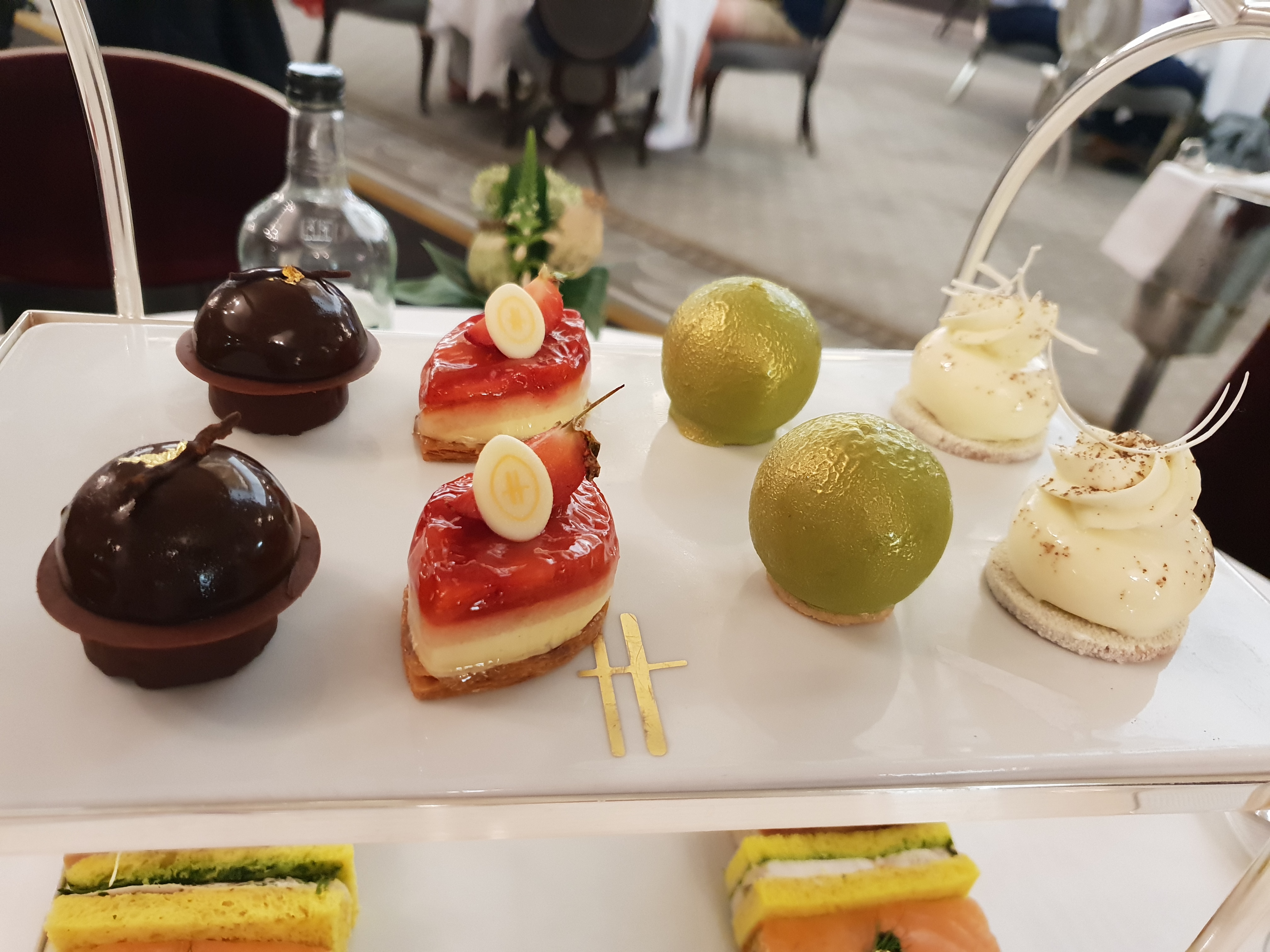 They were all interesting and delicious. 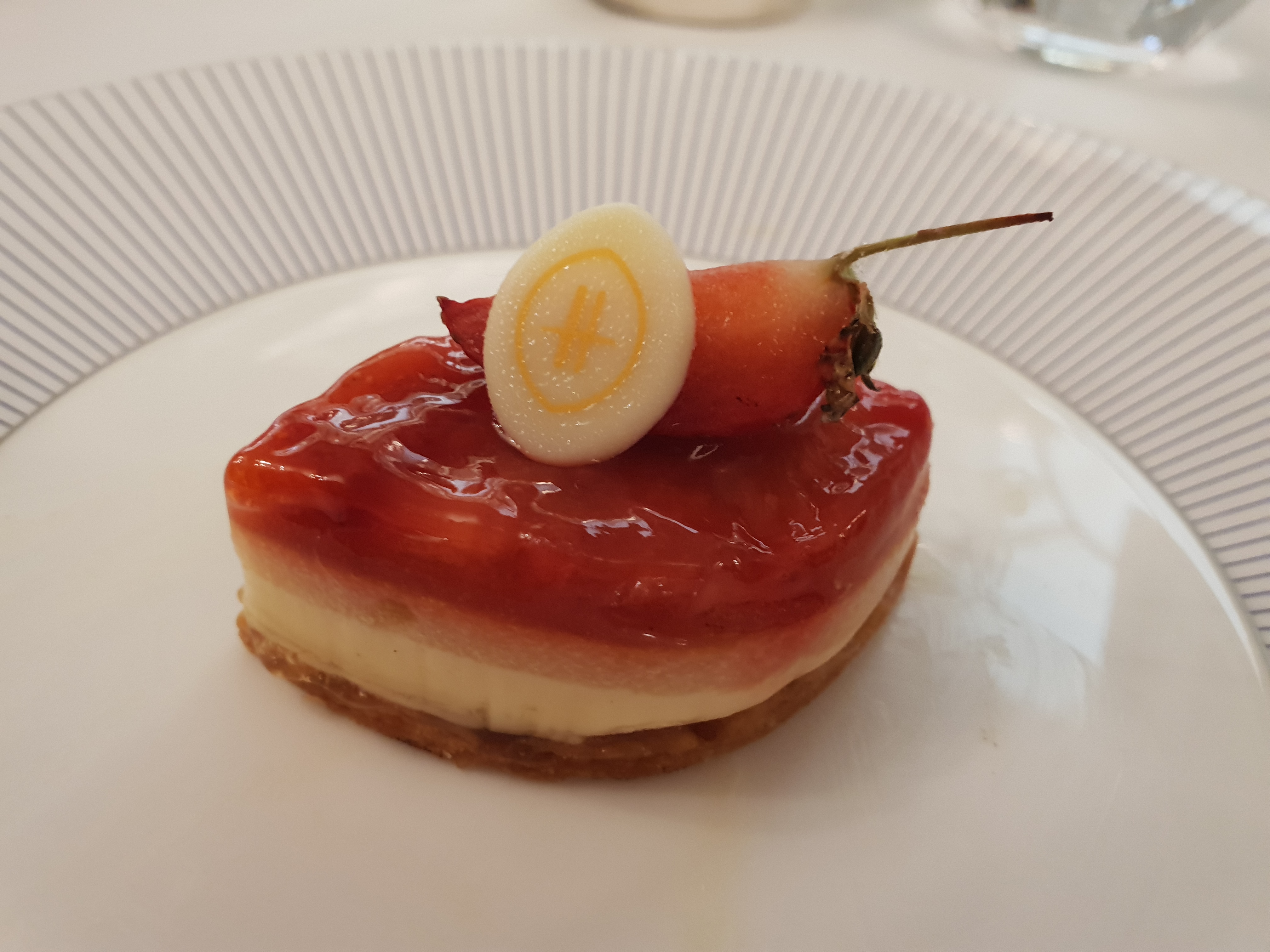 We both really enjoyed all of them. 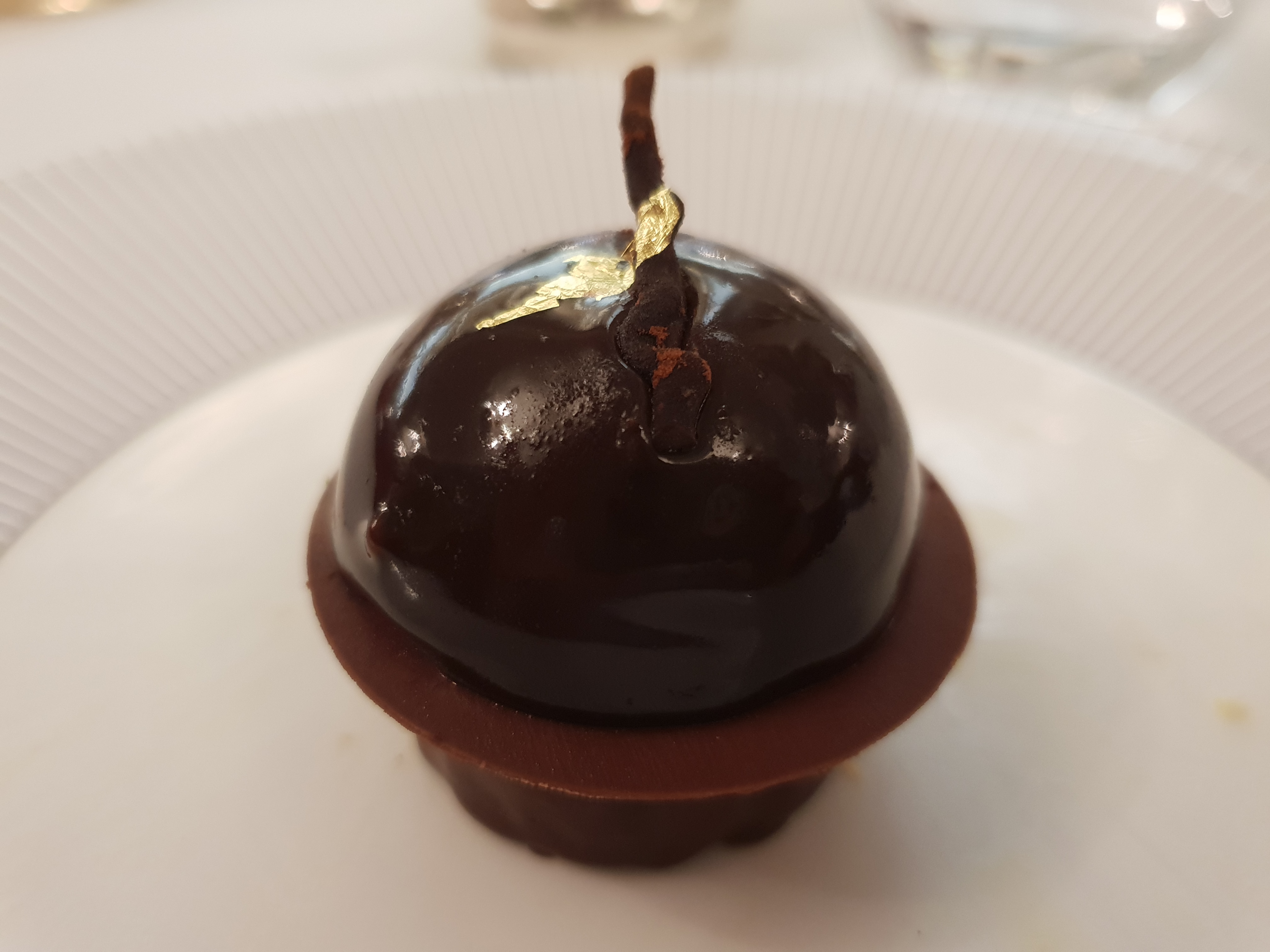 I think my favourite was probably the lime ball, which seemed to be a mousse inside a Harrods green chocolate ball. 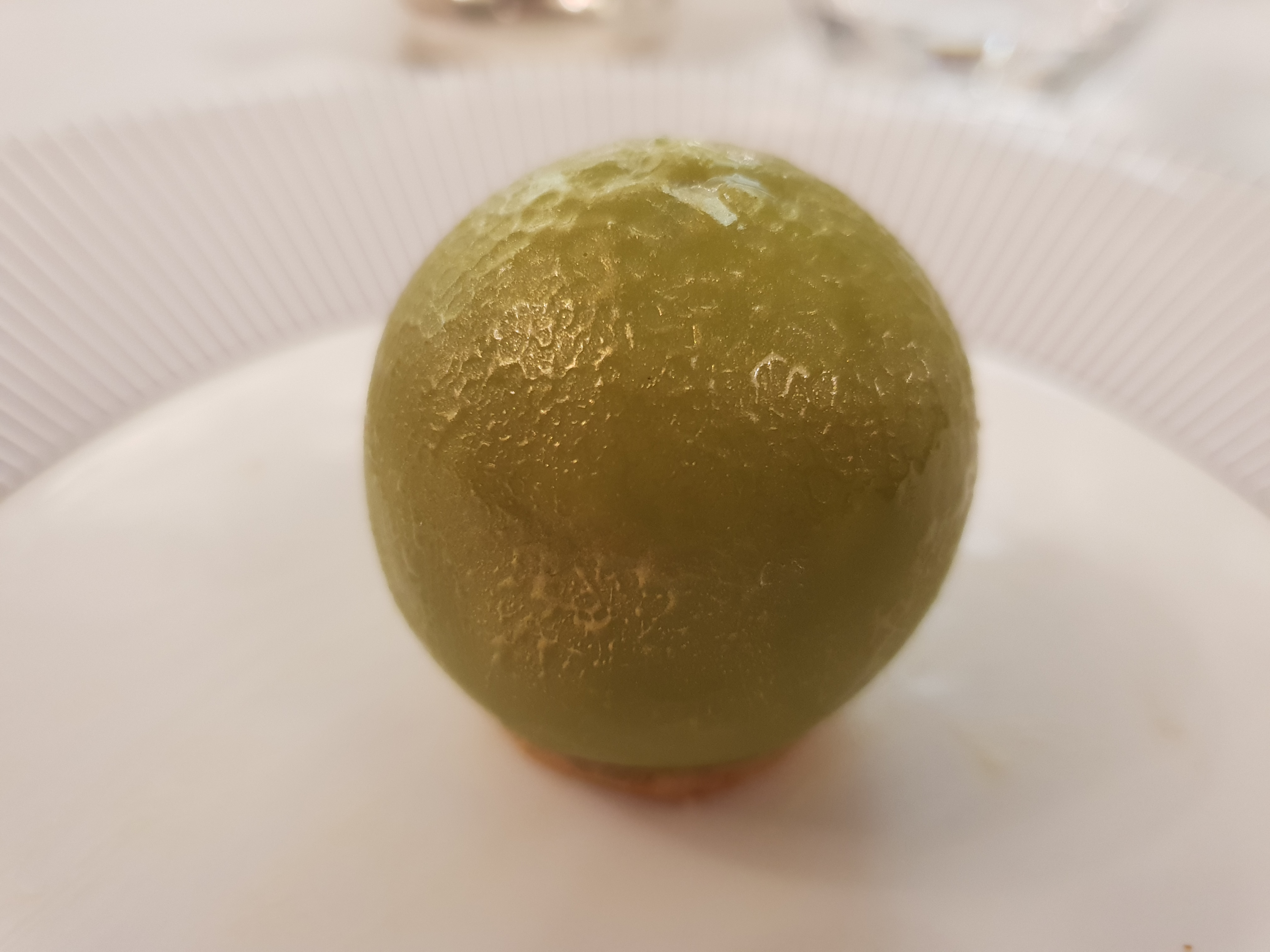 The coconut and vanilla blob was also a favourite. 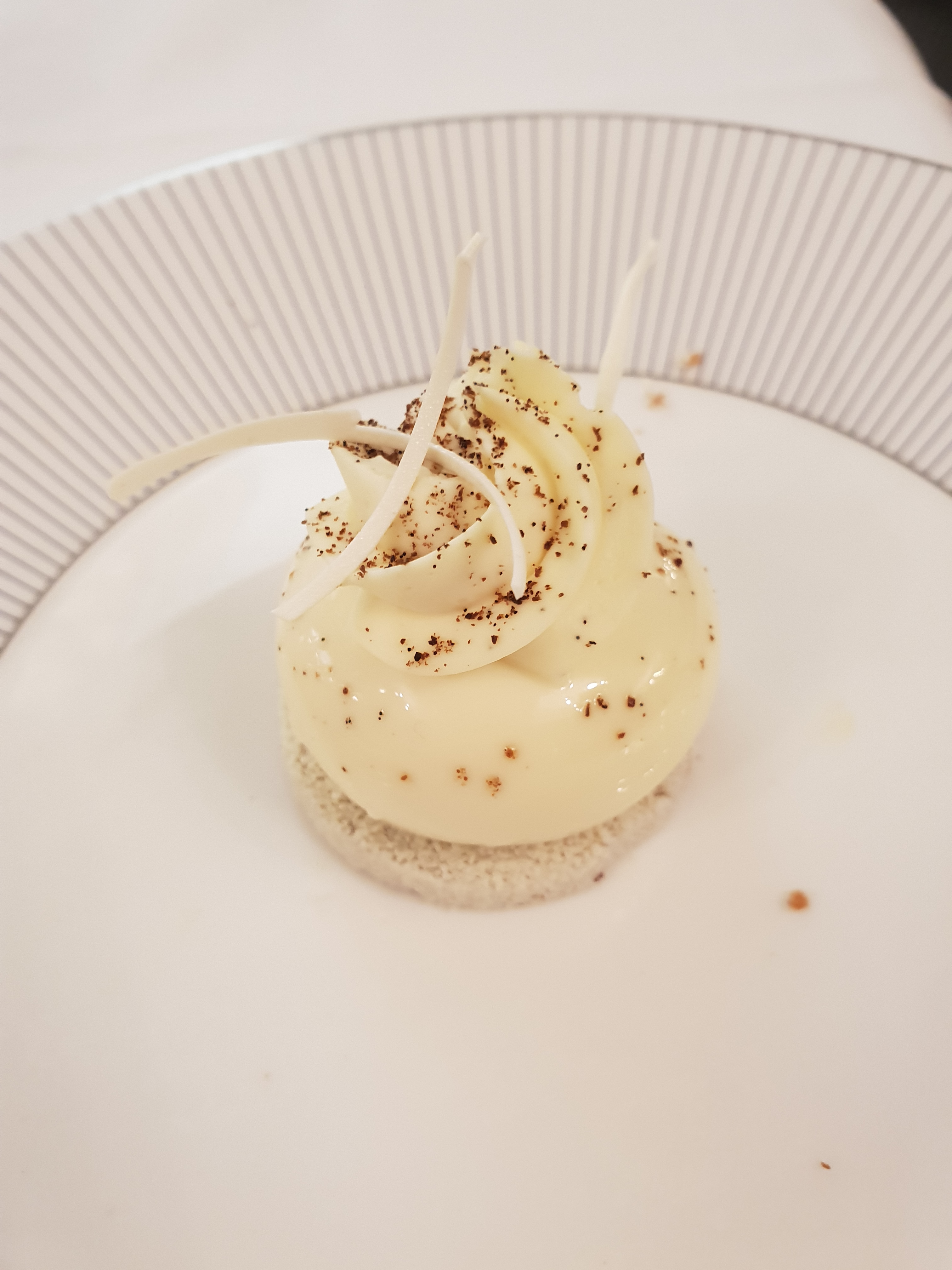 Last of all, the scones arrived, wrapped in a linen napkin 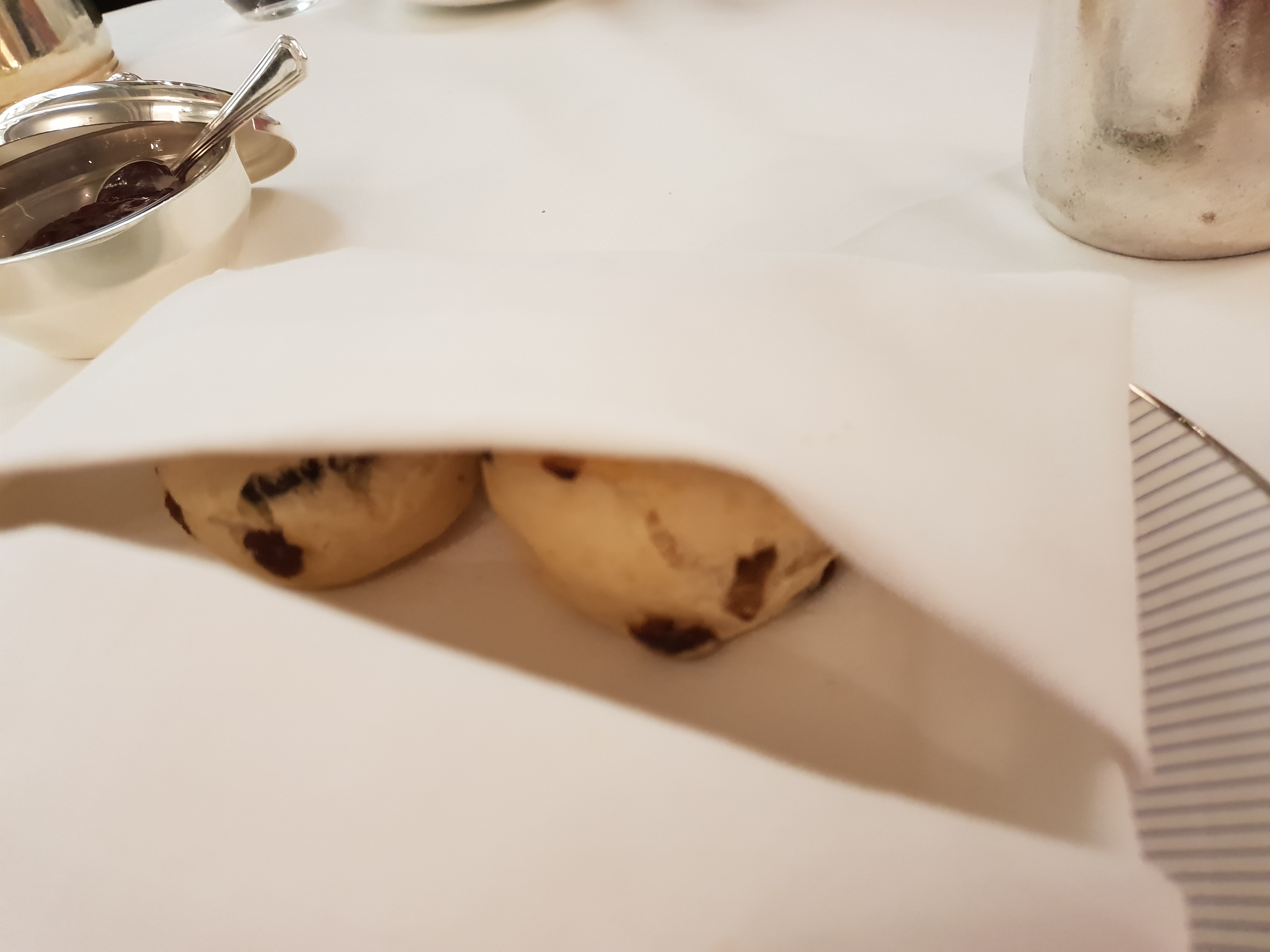 and accompanied by three silver dishes containing the jams and cream. 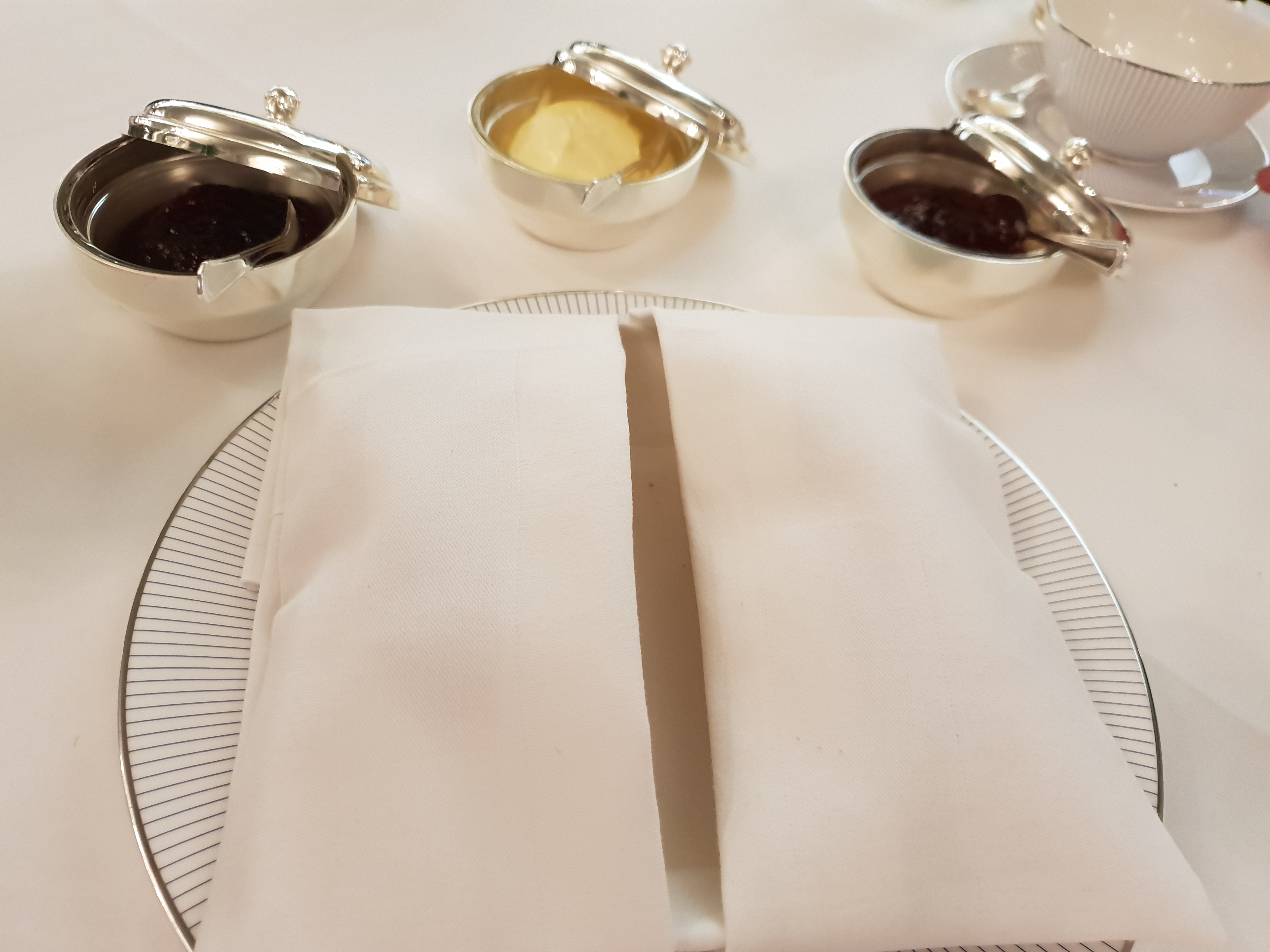 The scones were lovely and warm. They were all freshly made and tasted really good. The fruit scones had a nice amount of fruit in them.

I was particularly pleased to have a pot of raspberry jelly as well as the usual strawberry. Raspberry is one of my favourite jam flavours (after blackcurrant). Both jams were delicious, but the raspberry was really, really delicious! I loved it. Luckily, there was plenty of both of them. 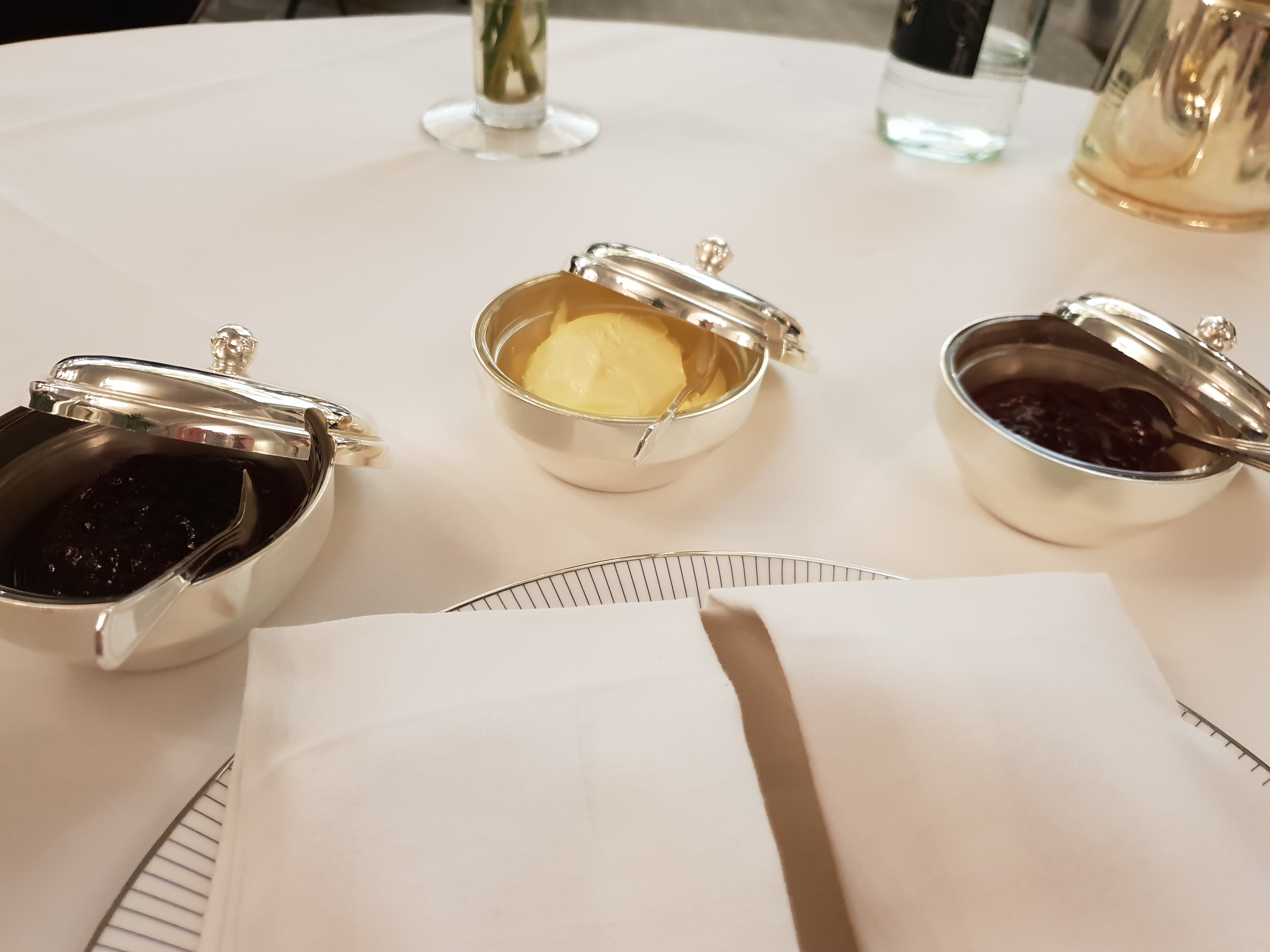 However, as is often the case, there was barely enough clotted cream for the four scones. We did not ask for extra on this occasion.

Service was very good. However, we had been to the Savoy for our previous Afternoon Tea, and it was not as good as the service there. We even had to pour our own tea a couple of times!!!!! Shocking!!

One comment I would make is that the Tea Room is open at both ends. It is not a separate room with doors. As a result, people are quite often walking through the middle of the room to get from one end to the other. We found this a bit odd and a little distracting. Luckily, it didn’t happen too much. 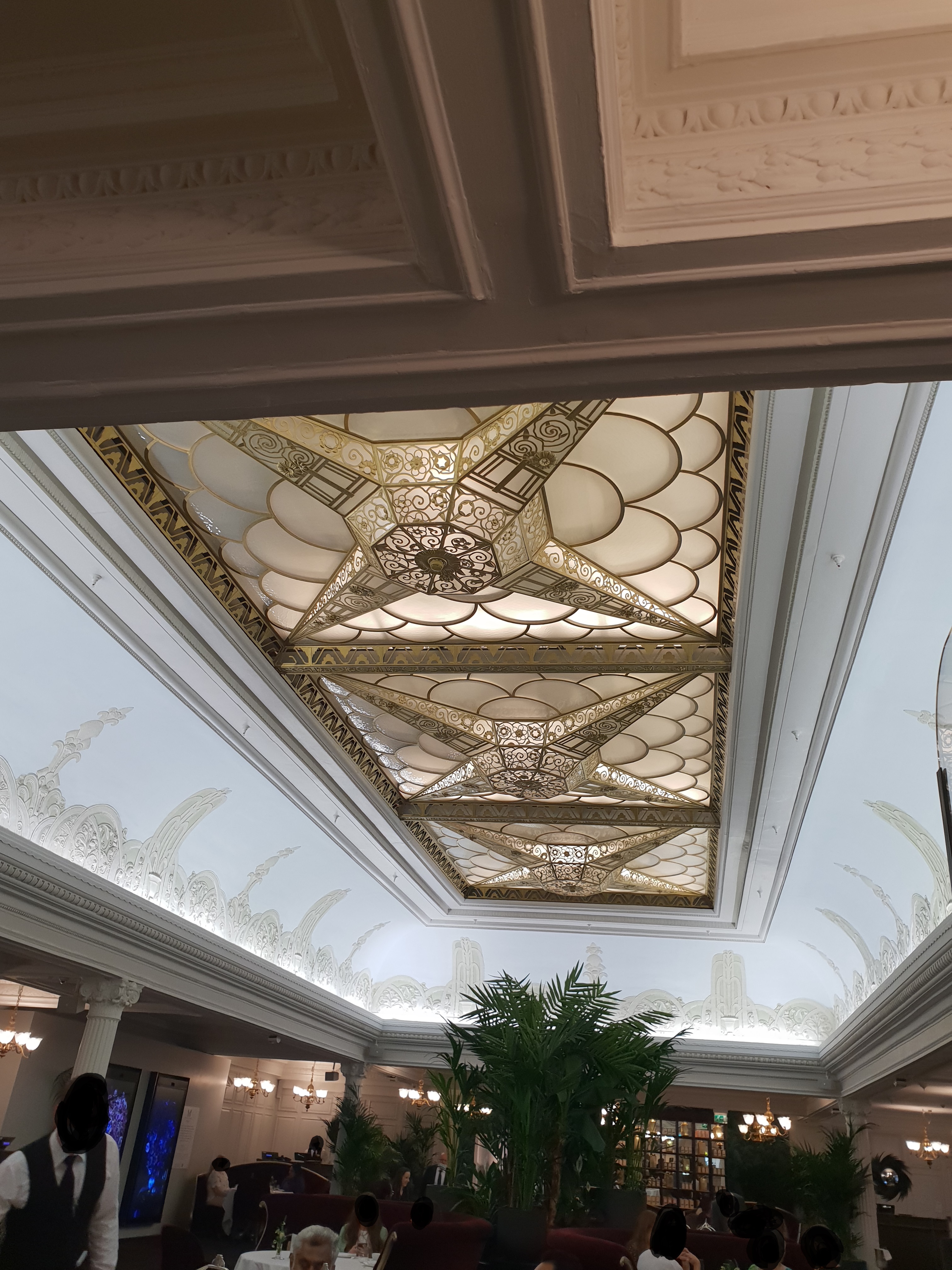 Finally, this is another expensive Afternoon Tea. However, we felt it was worth the money. Having said that, this Afternoon Tea is often available as a voucher from companies such as Buy-a-Gift and Travelzoo. Often at a slightly reduced price from that published. If you can find and use one of these discounted vouchers, it would make this tea even more excellent value. You are having Tea in a great British institution, and it is a very good Tea. 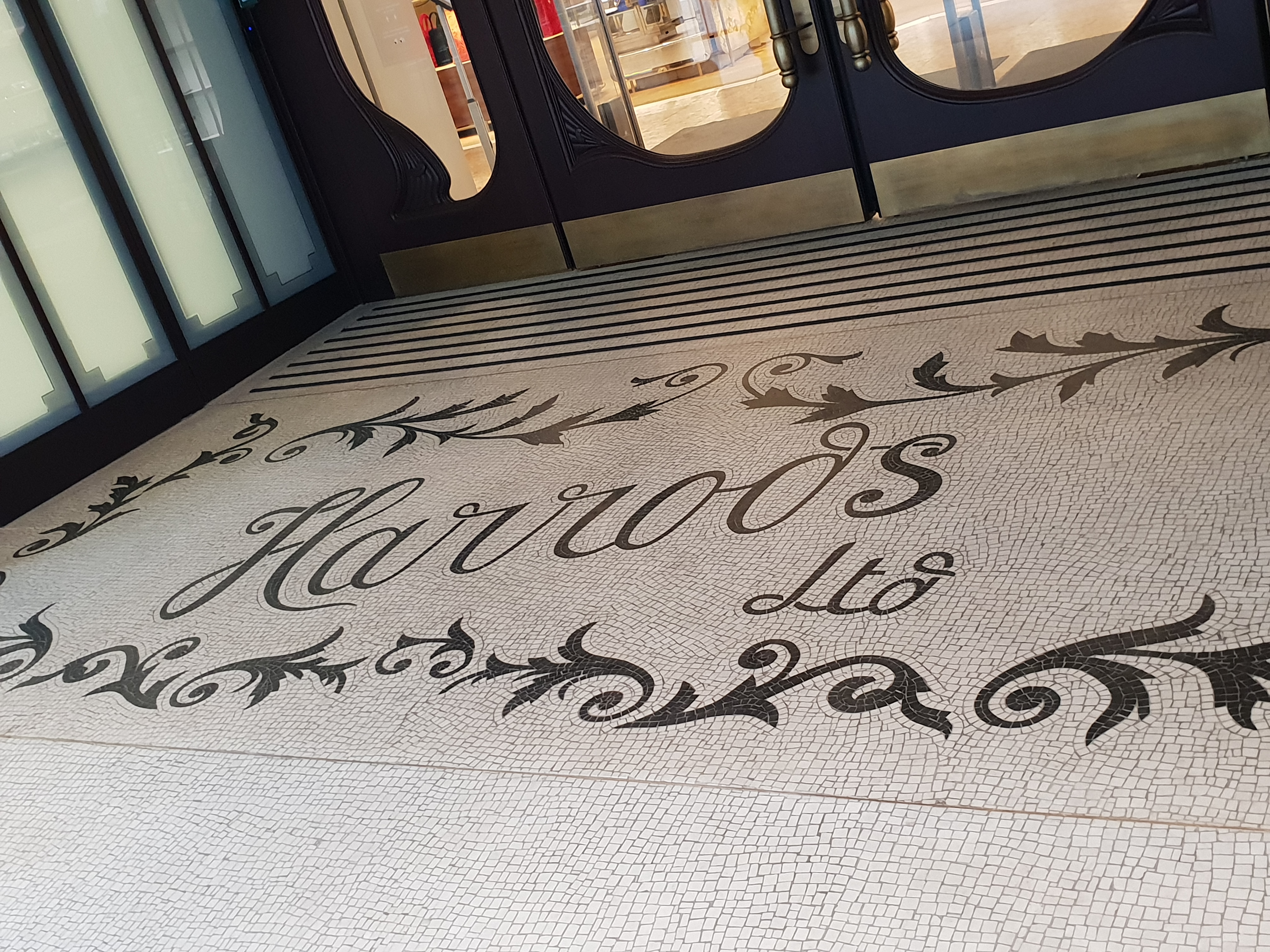