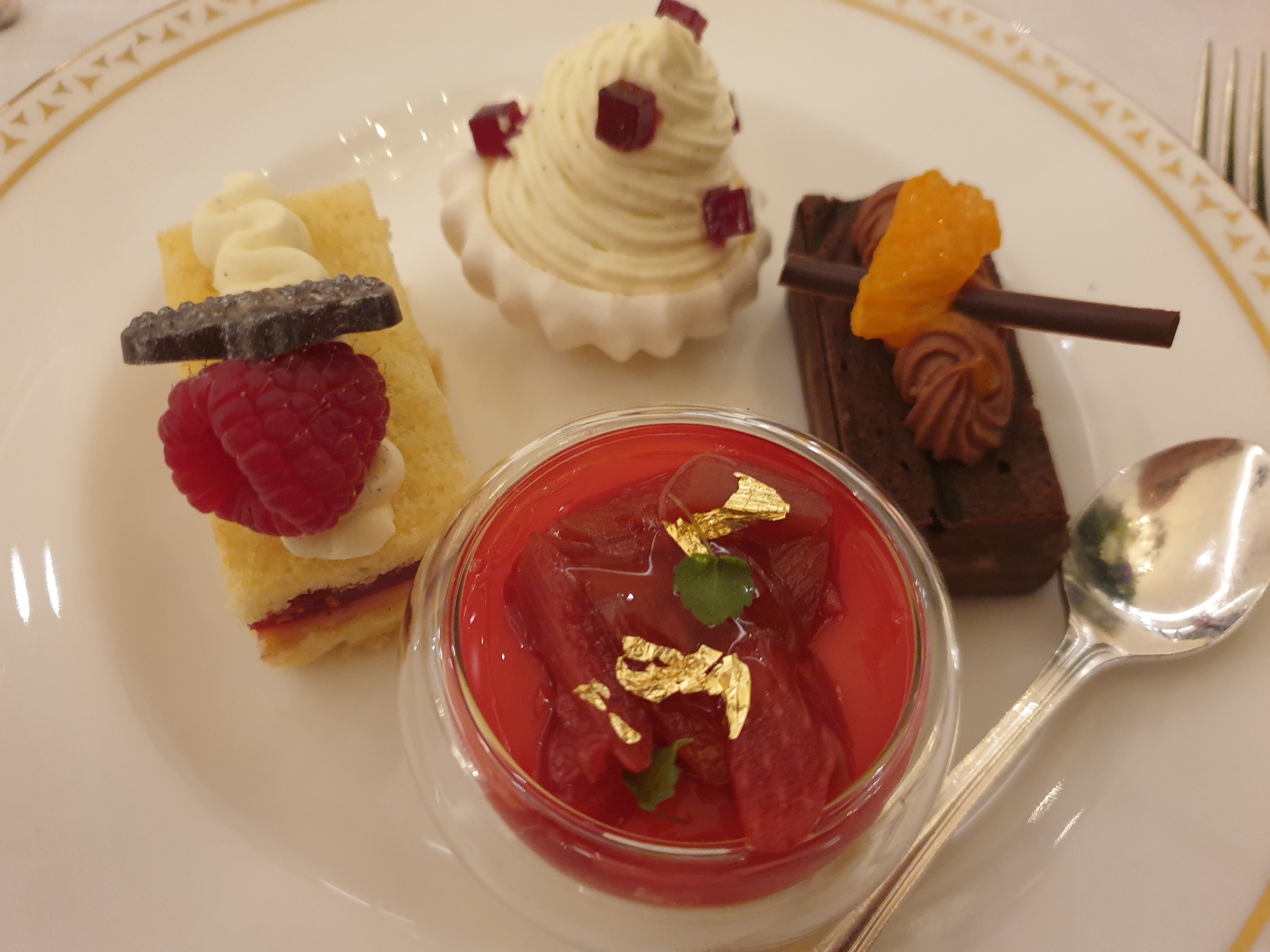 Parking and Access – The Dorchester is a central London Hotel situated on Park Lane. The best way to reach the hotel is by public transport. Either bus, underground or taxi. There will be car parking somewhere in the area, but it will be busy and very expensive. There is also a significant congestion charge for most vehicles entering the London area. 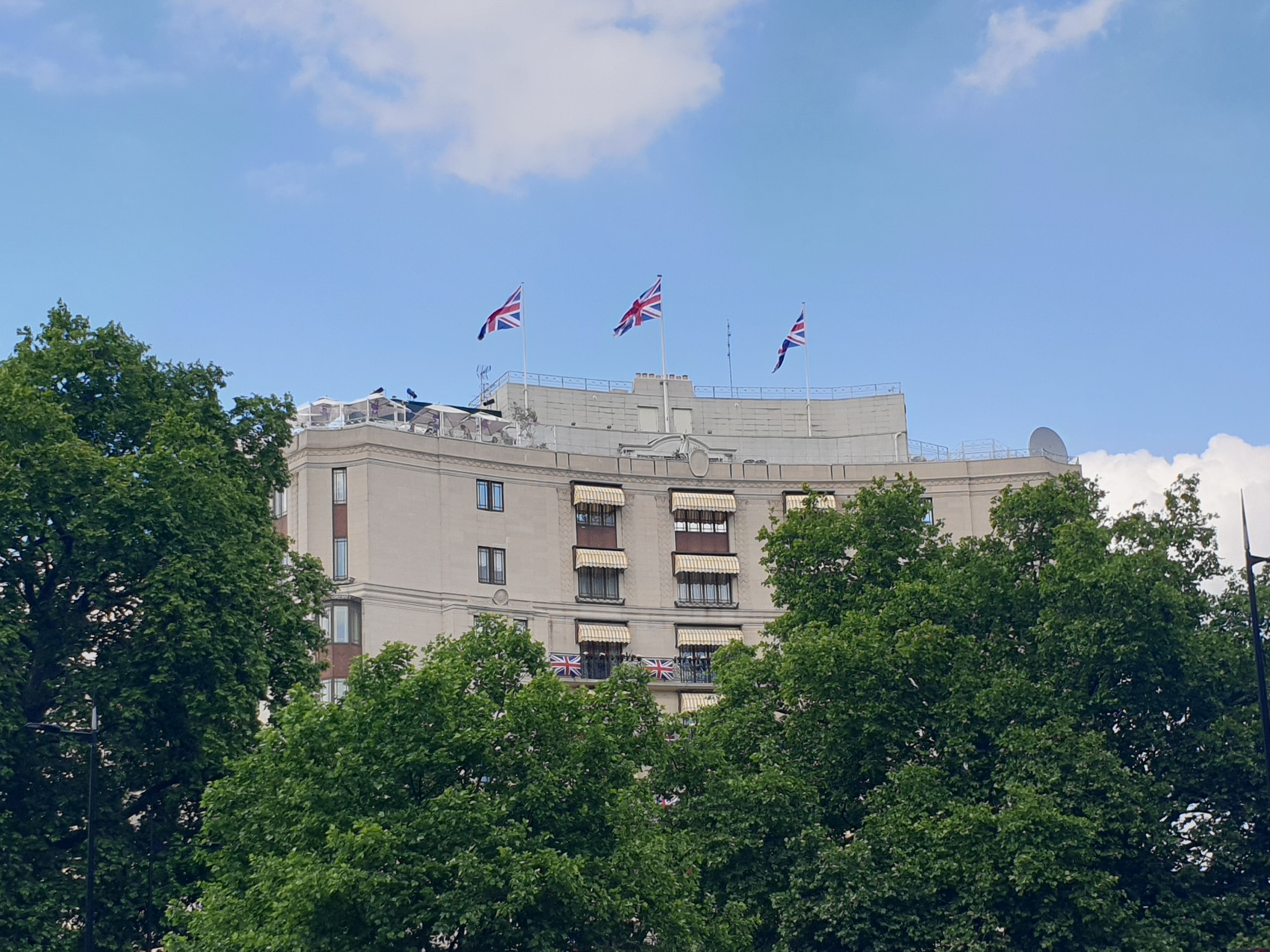 The hotel is currently undergoing renovation. As a result, the main entrance is closed, and a smaller entrance around the side of the hotel is in use. The current doorway had two steps up to reach it. There are doormen present to assist anyone who needs it. 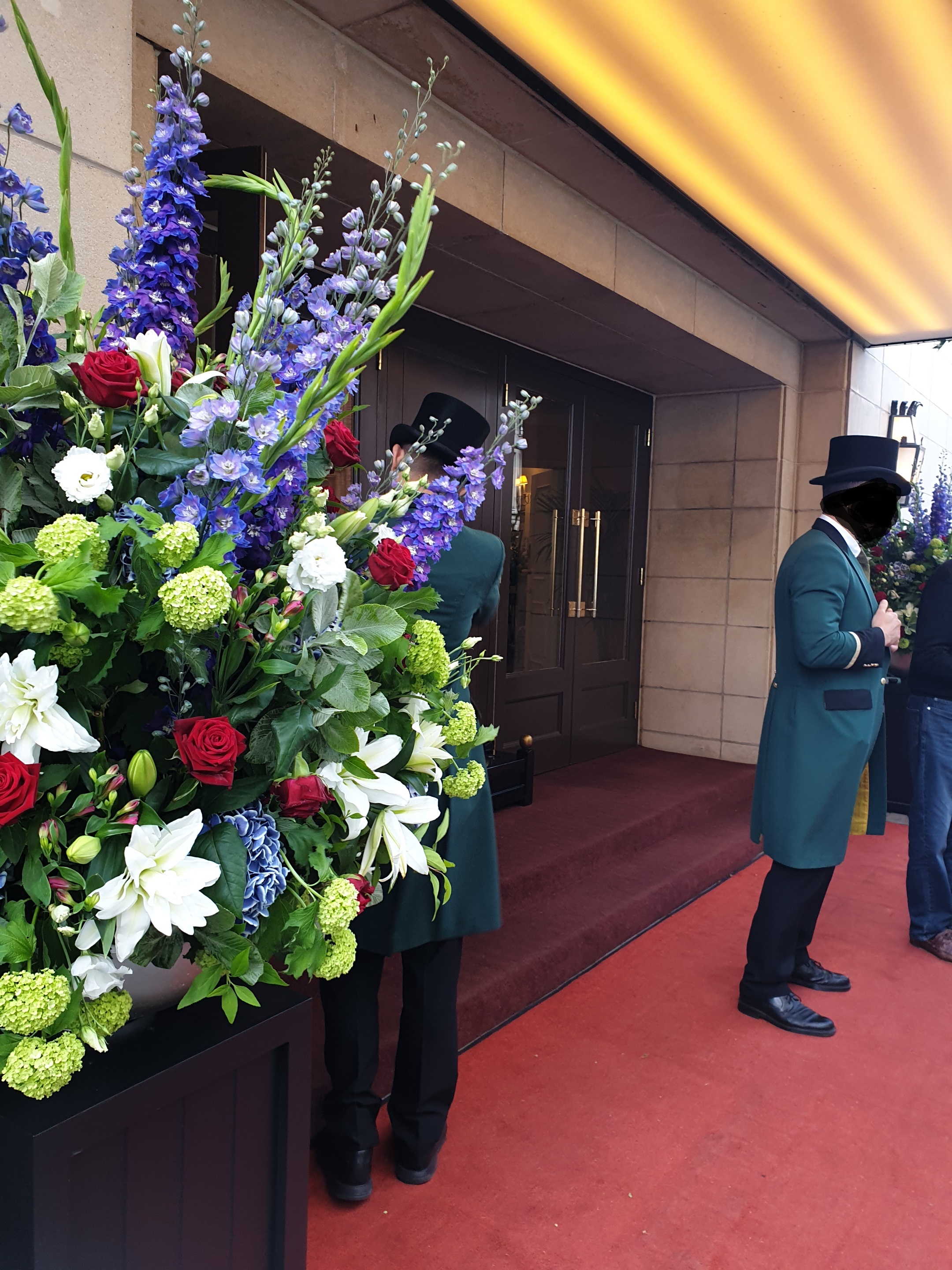 The toilets that we were shown to were accessed down a few steps. I did not spot a separate disabled toilet, but I am certain there will be one available. 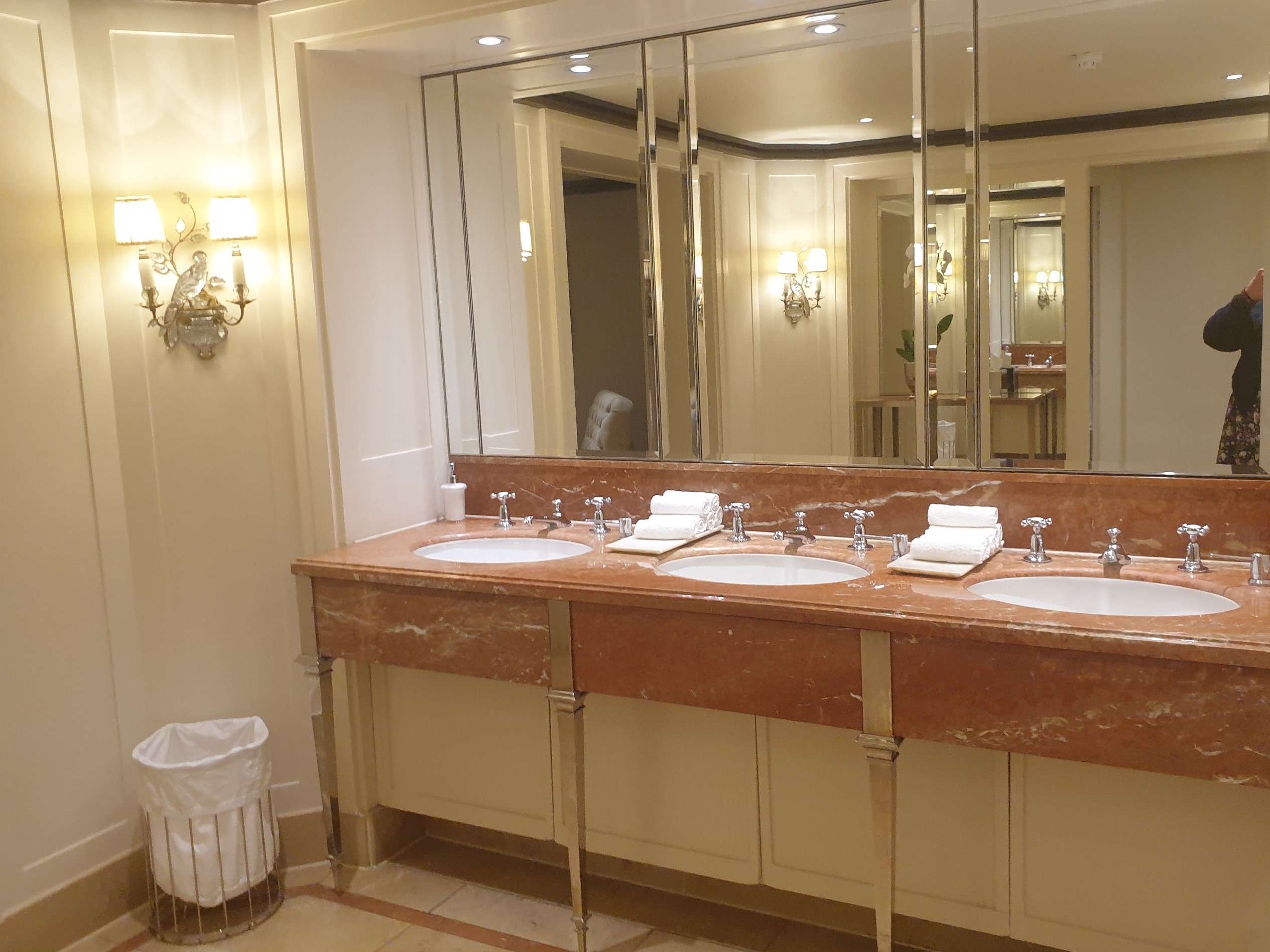 Background – I was given a voucher for Afternoon Tea at The Dorchester for a significant birthday during the 2021 lockdown for the coronavirus pandemic. We have been waiting to use it ever since.

We decided to look at the hotel’s website, to choose when we should try to book our Tea. I spotted that they were doing a special Platinum Jubilee Afternoon Tea for a short period in June, around the celebration long weekend for the jubilee. We managed to make a booking, and were ready to plan our trip.

Contents – Three rectangular sandwiches (asparagus and crab, roast beef with mustard, smoked salmon with apple and lemon mayonnaise), egg and cress with cocktail sauce in a brioche bun and a mini stilton, leek and cheddar tart with apple chutney. An ice cream jam penny. A small plain scone and a small fruit scone. A pot of strawberry jam, a pot of Earl Grey tea jelly and a pot of clotted cream. A blackberry Eton mess, a vanilla Victoria sponge, a mini dessert of rhubarb and custard and a chocolate orange biscuit cake. A glass of UK sparkling wine and your choice of tea from a large menu of teas. 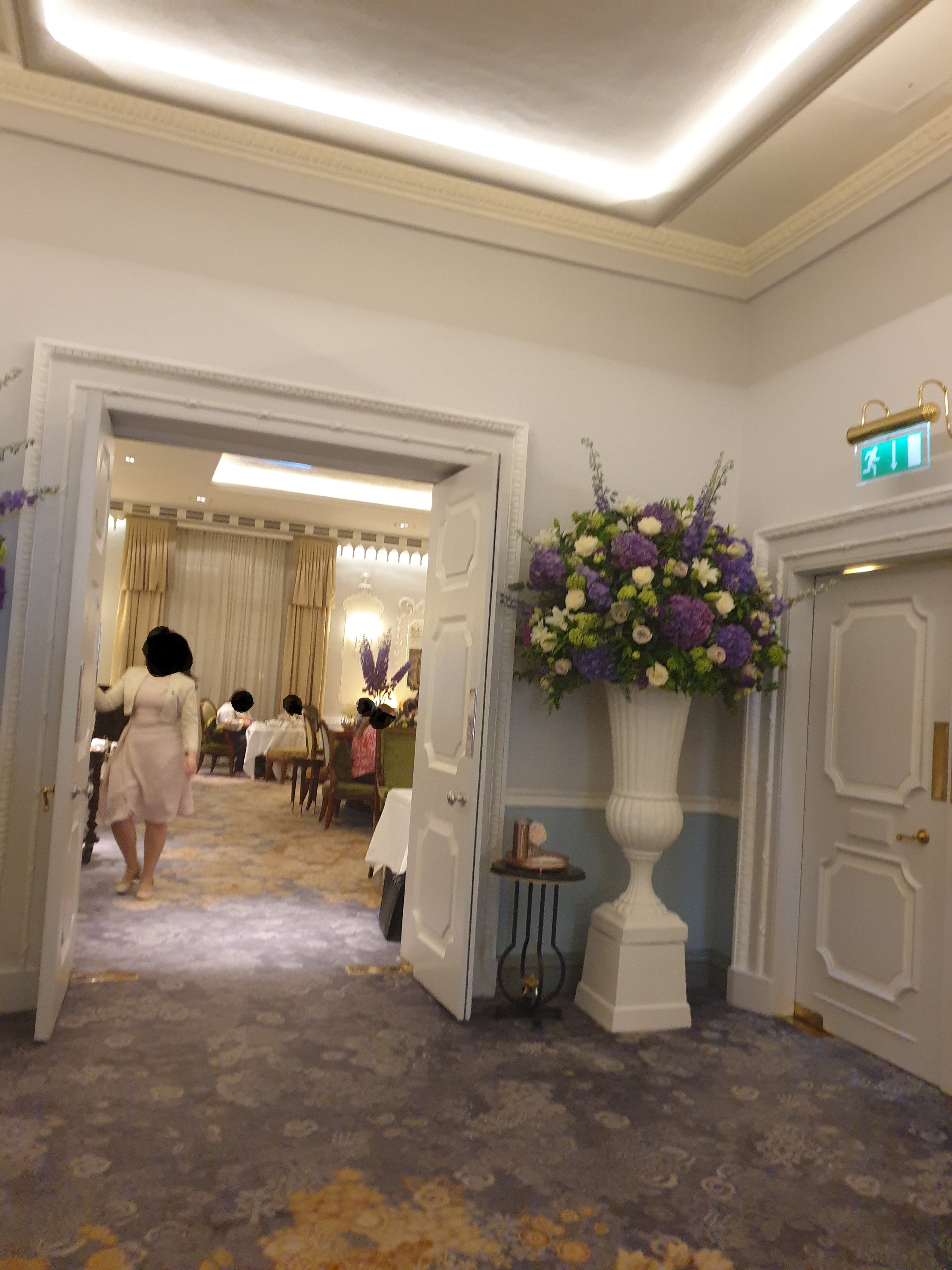 The lady on the desk for the room showed us to the toilets, and where to leave our bags. We then returned to the lobby by the room to await our table.

When we entered the Orchid Room it was beautifully decorated with large flower displays. There was a pianist playing a grand piano in the corner of the room. 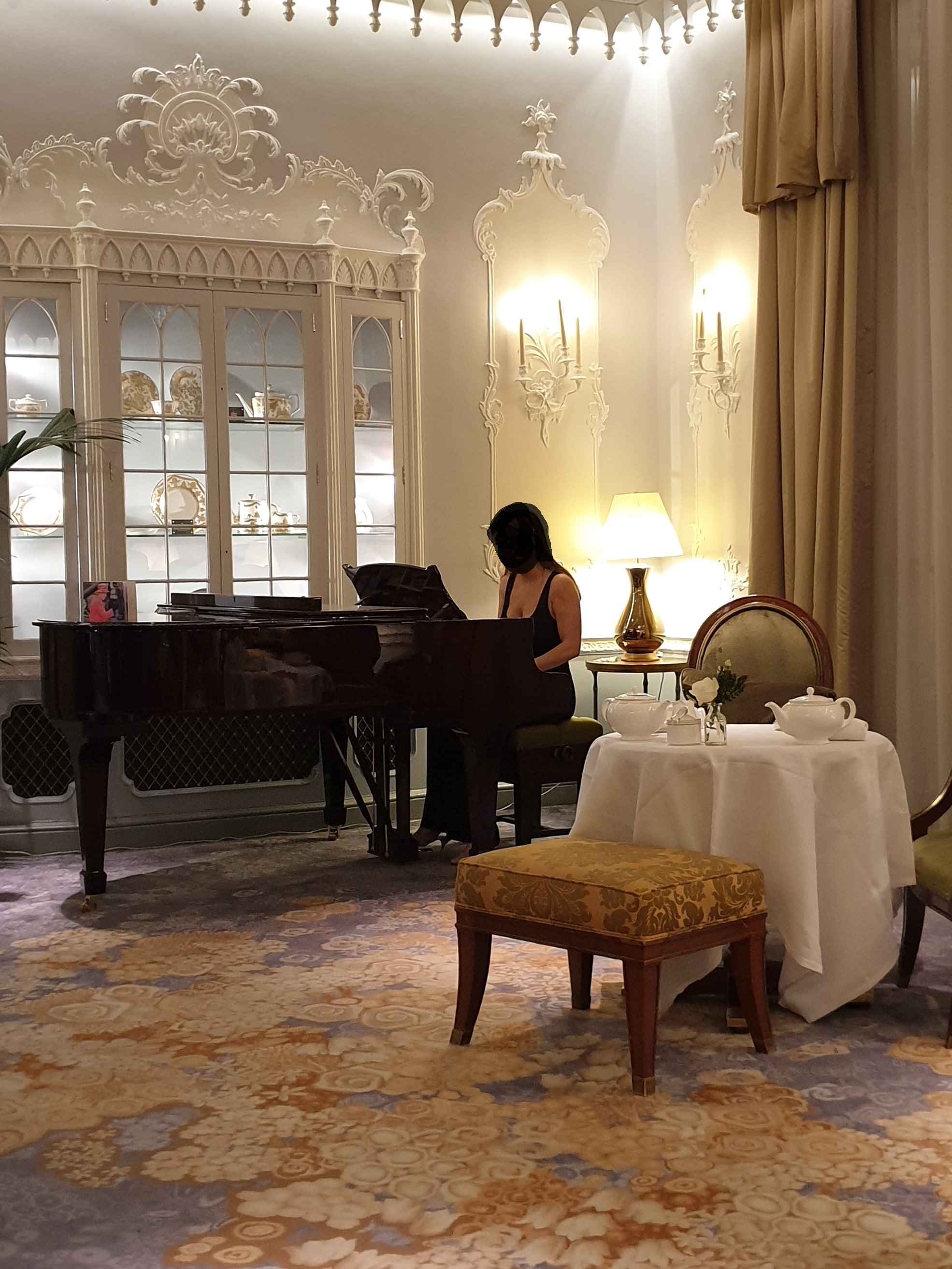 The tables were well spaced out around the room, with comfy chairs to sit on whilst eating the Tea. It was a lovely, relaxed atmosphere. 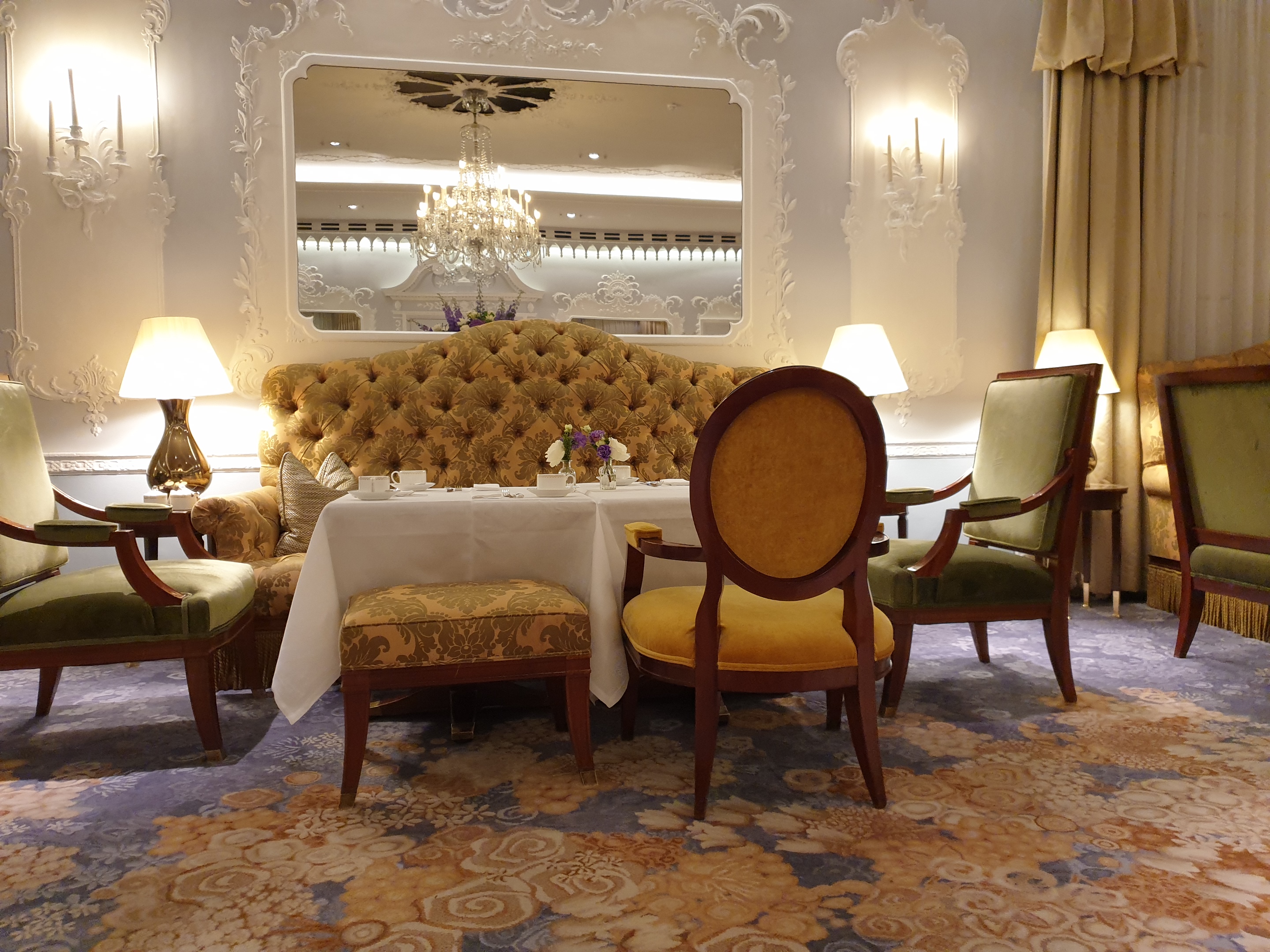 We were shown to a table covered with a white linen table cloth. The table was laid with white linen napkins, Champagne glasses and a heavy knife and fork. There was also a tea cup and saucer each, plus a covered sugar bowl, all in The Dorchester’s own design china. 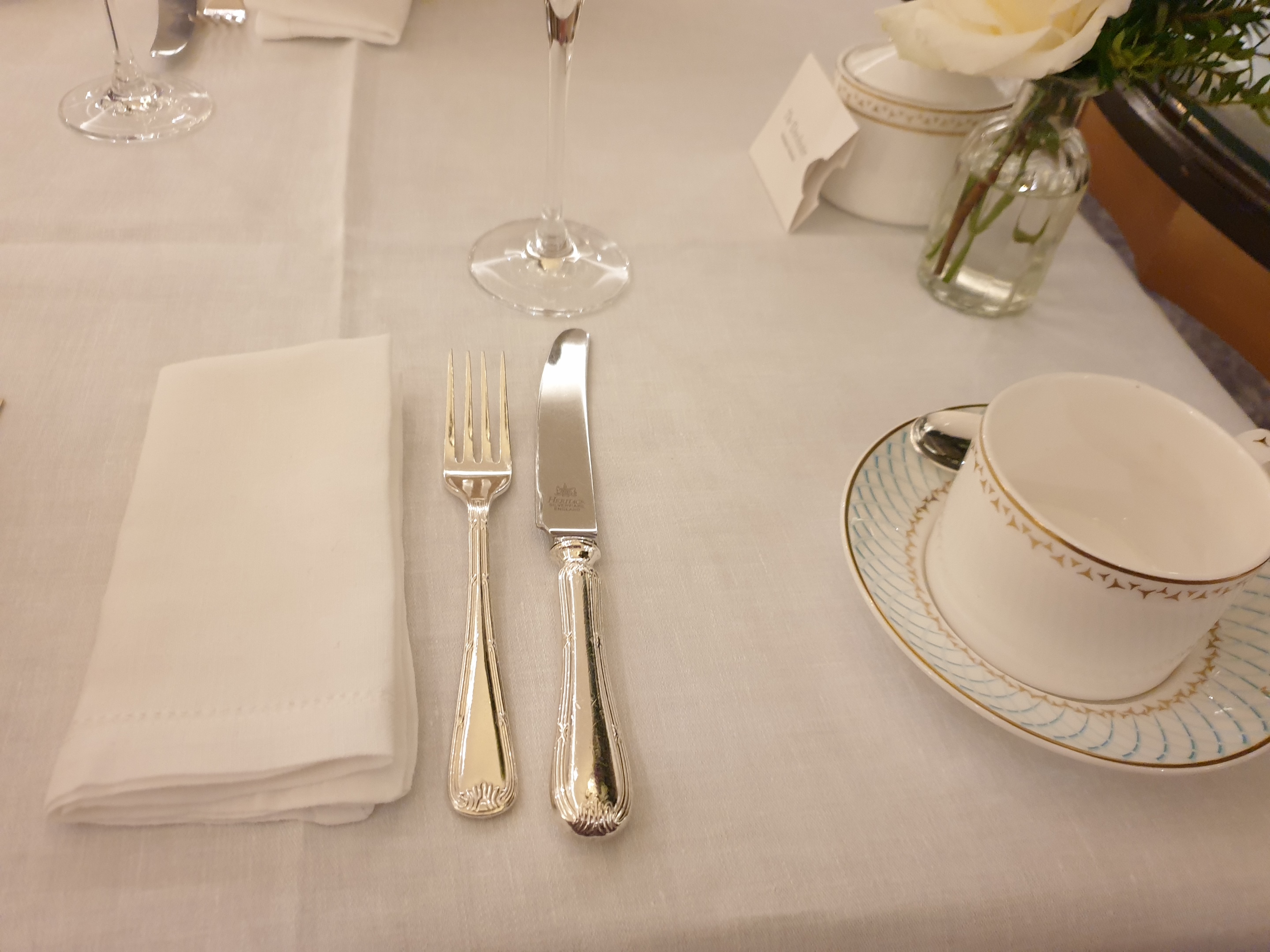 The table was finished with a pretty cream rose in a small glass vase. 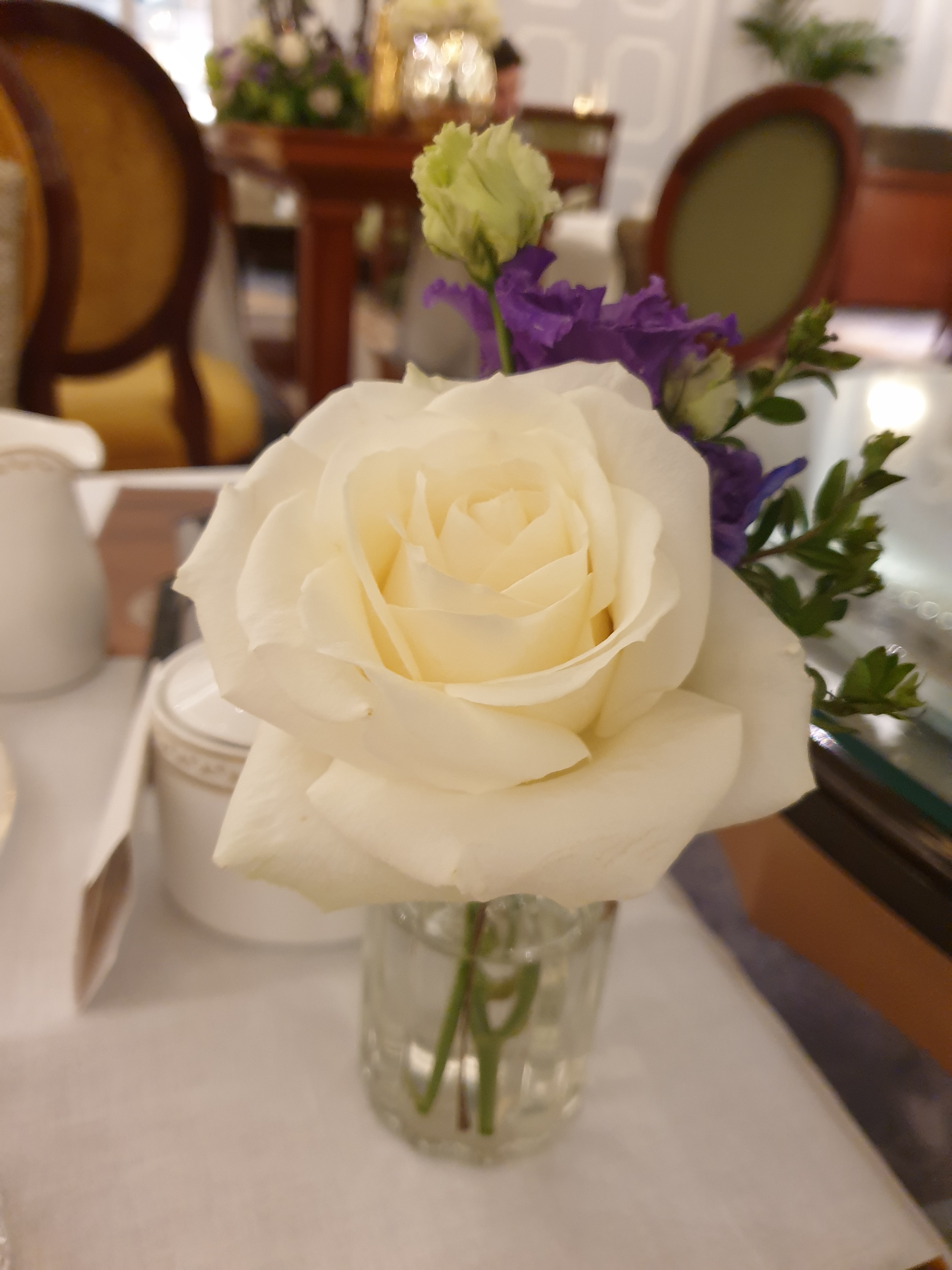 When we sat down, we were offered a glass of a UK sparkling wine. When I explained I don’t drink wine, the waiter told me he would find an alternative drink for me. I was later given a tall glass containing a drink they called Berry Fruitfulness. The drink contained passion fruit, raspberry, peach and bitter lemon. It was very refreshing. 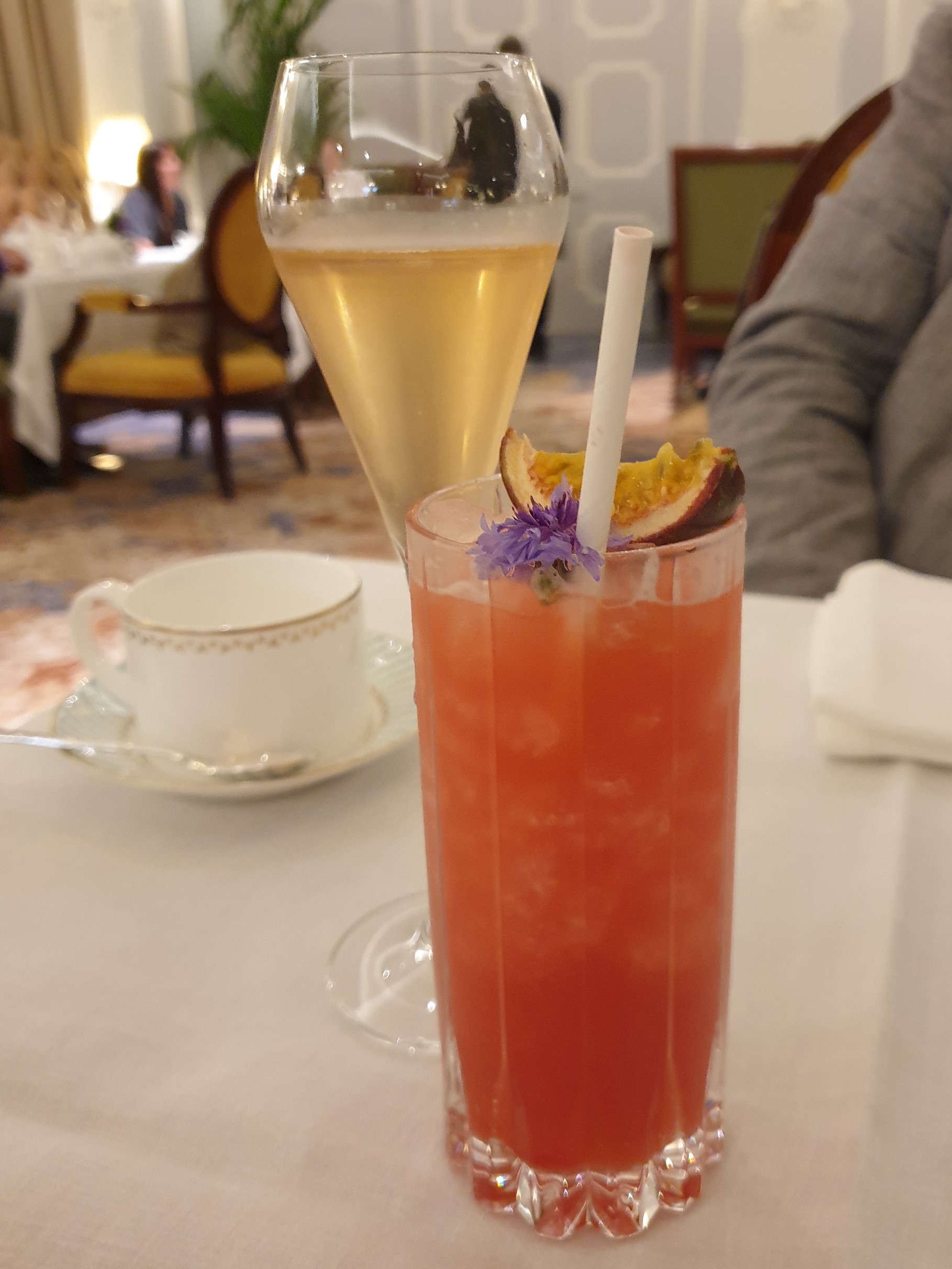 We each had a menu to choose our tea from. We decided to have the Dorchester Jubilee Blend. This tea was apparently picked from bushes propagated from some planted in Ceylon, by Prince Philip in 1954. However, we were not asked which tea we wanted until after our sandwiches had been served.

The sandwiches arrived first, on a plate each. They were beautifully presented, with little bits of blue cornflower decorating them. 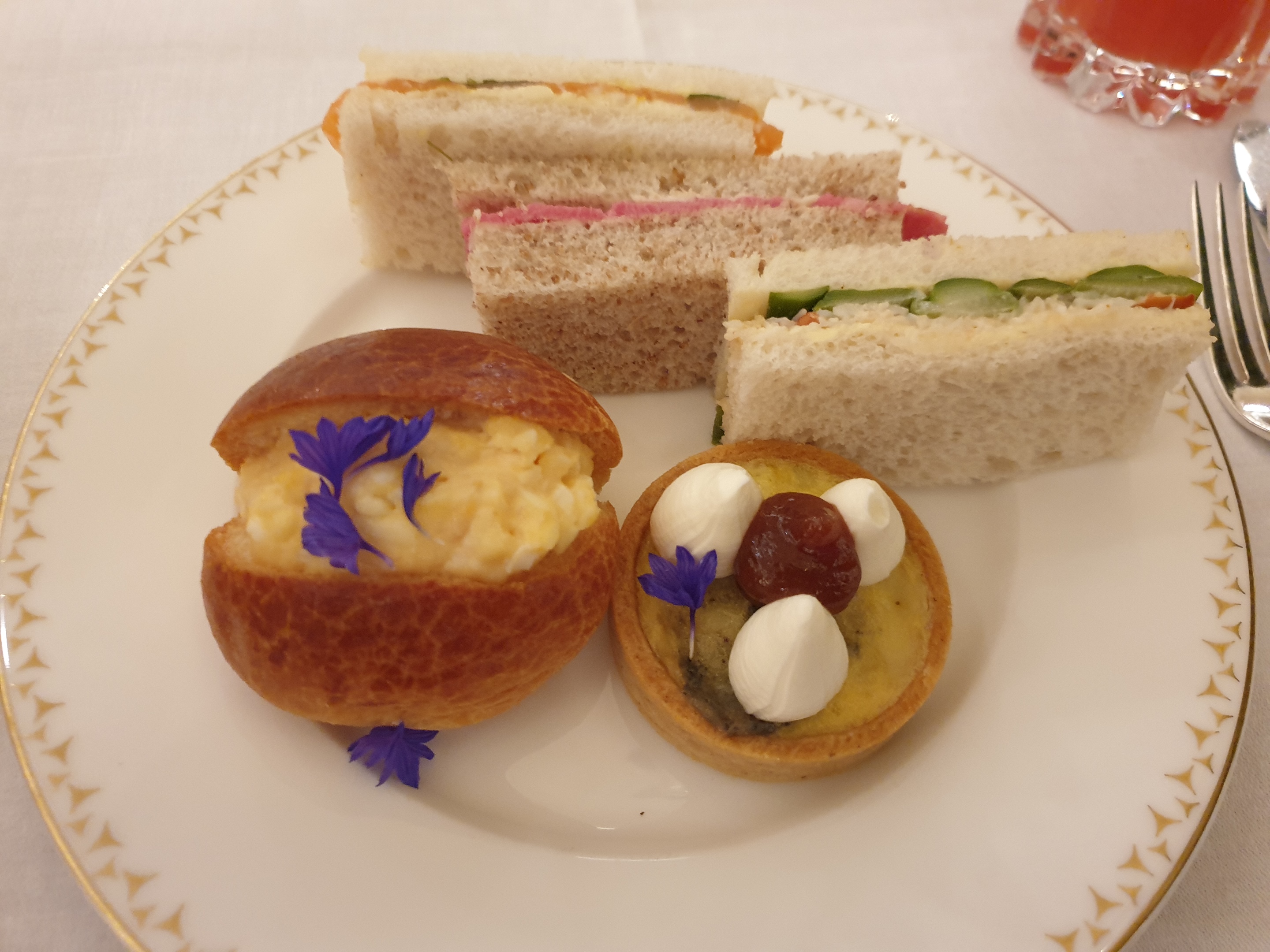 All of the sandwiches were delicious, and obviously freshly made. We had our beef sandwiches without mustard. My favourite sandwiches were, unusually for me, the smoked salmon sandwiches. However, the tartlet made with stilton and cheddar cheeses and leek, was the best of all.

When we had finished our sandwiches, the waiter asked if we would like another plate. Assuming he meant another plate between us, we said yes, please. He then brought out another plate each! It was a very good job we had not had any lunch!

The tea arrived after the first plate of sandwiches, in a round white china teapot with the gold Dorchester pattern around the top. There was also a matching milk jug and a heavy silver tea strainer. The tea was just the right strength for us and was just what we needed on a hot day. The pot was refilled later, when we needed it. 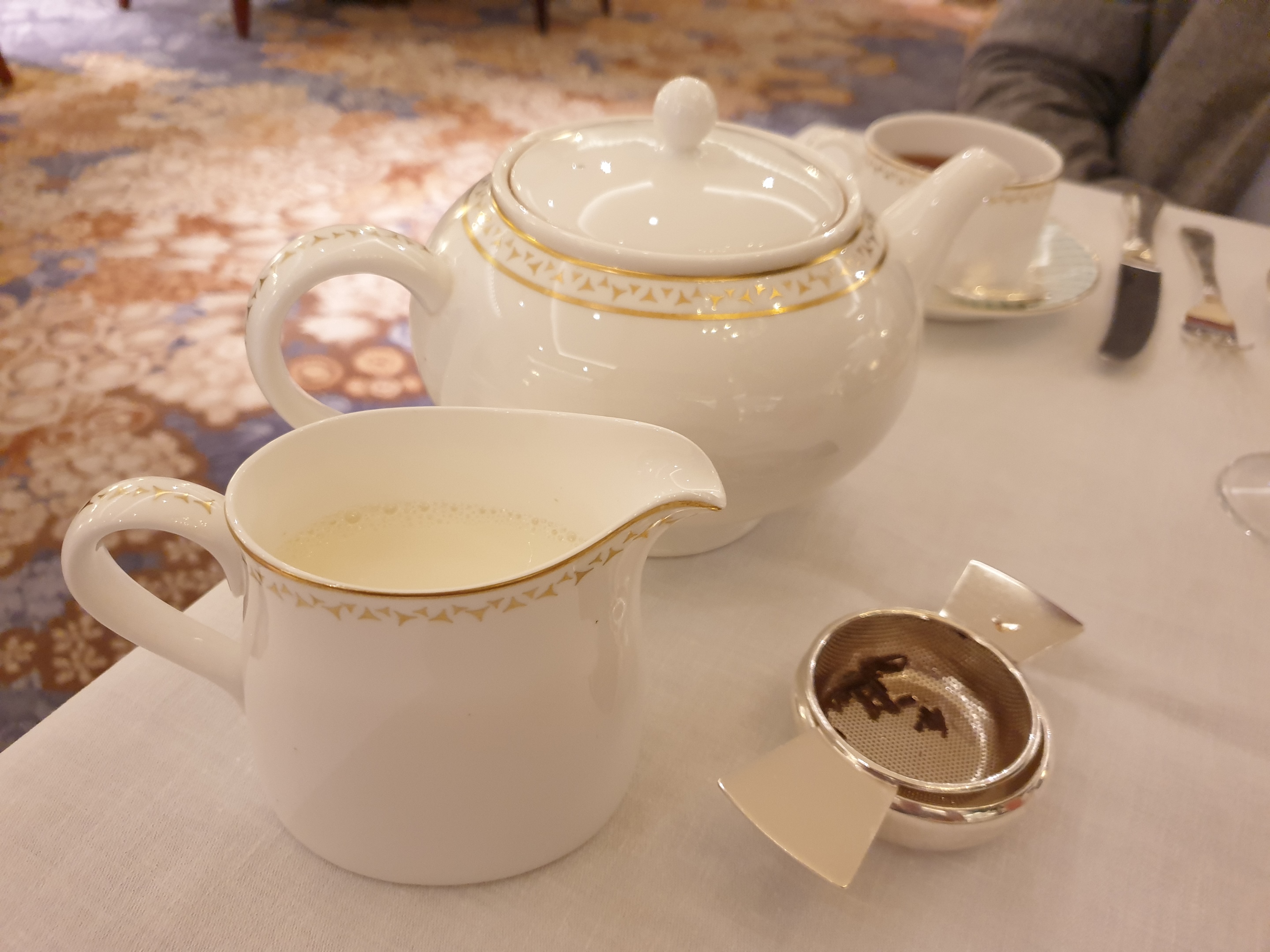 Following the sandwiches, we were brought a plate containing the jams and clotted cream. We were also brought a bronze-coloured package each with a picture of the Queen on it. We were told this was our pre-dessert! 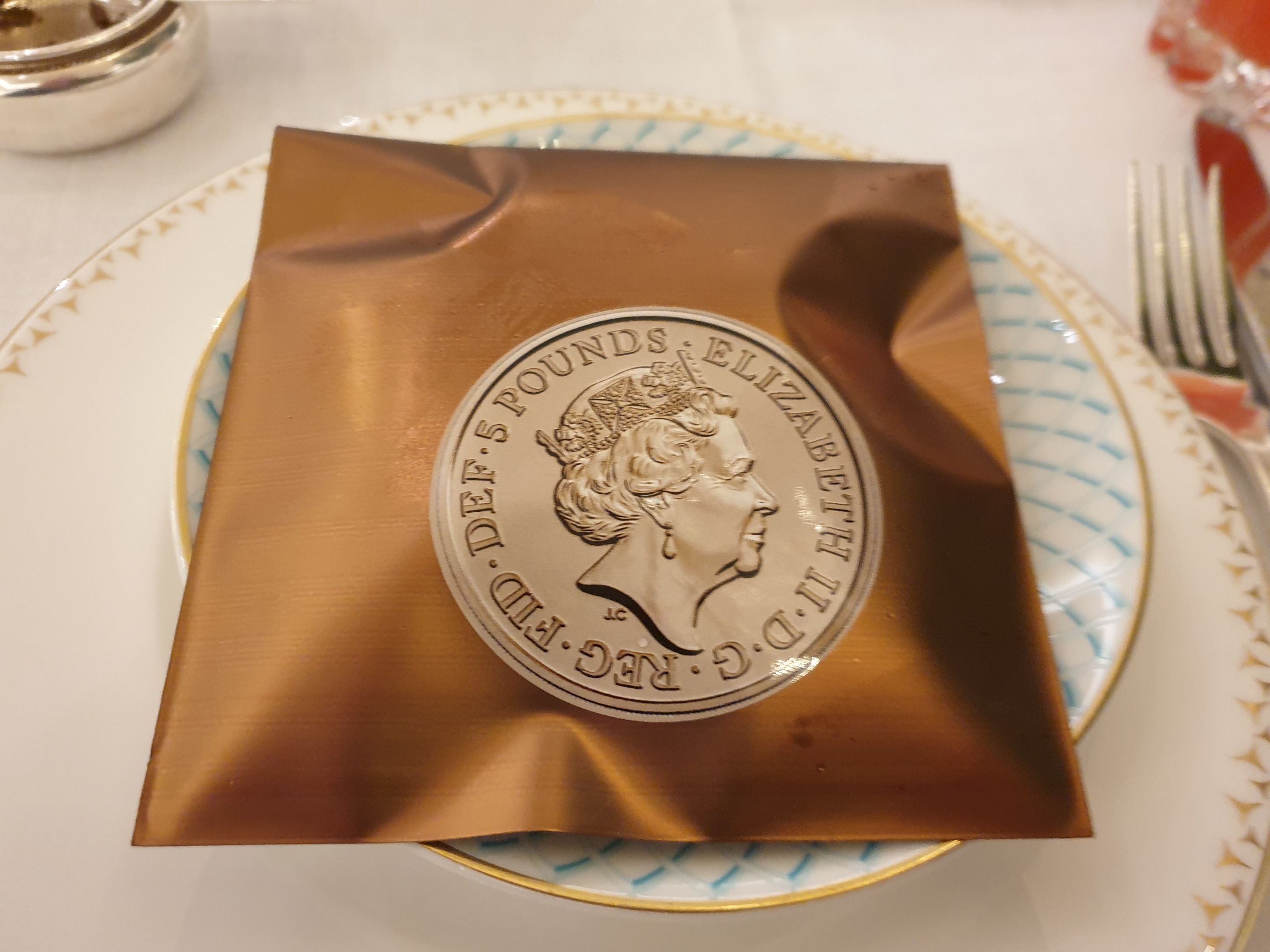 This package contained a jam penny made from Earl Grey tea ice cream sandwiched in strawberry meringue. I am not a fan of Earl Grey tea, but this was not too strongly flavoured, and was rather good. 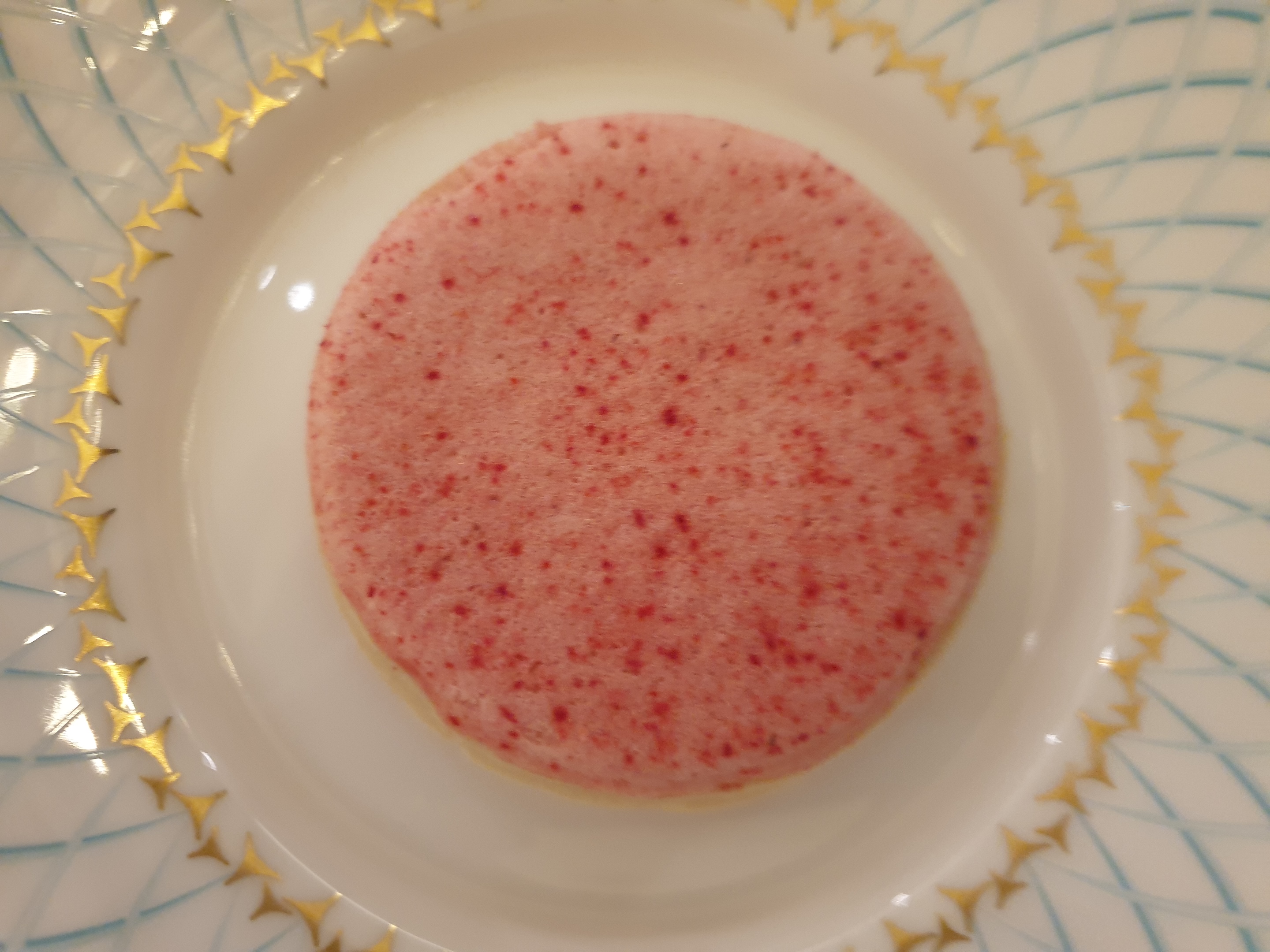 Following the jam penny, we were brought the scones. These arrived on two plates. They were warm and freshly made. However, they were very small! This was a shame, as there was plenty of jam and we would have liked to have used more of it! They were, however, very good. 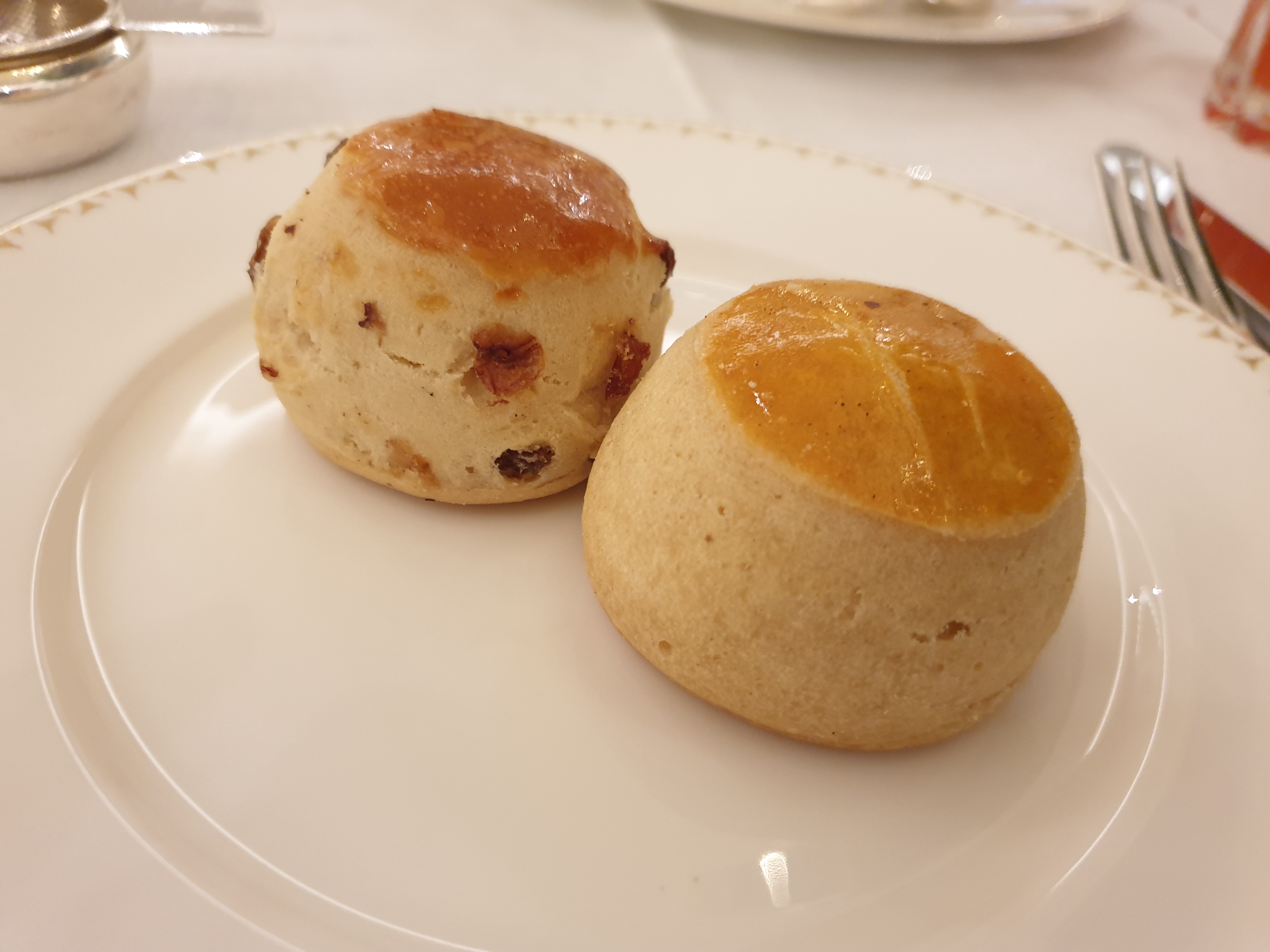 The strawberry jam was particularly good, with large pieces of fruit in it. However, the Earl Grey jelly was a little hard to manage, being quite a solid jelly. 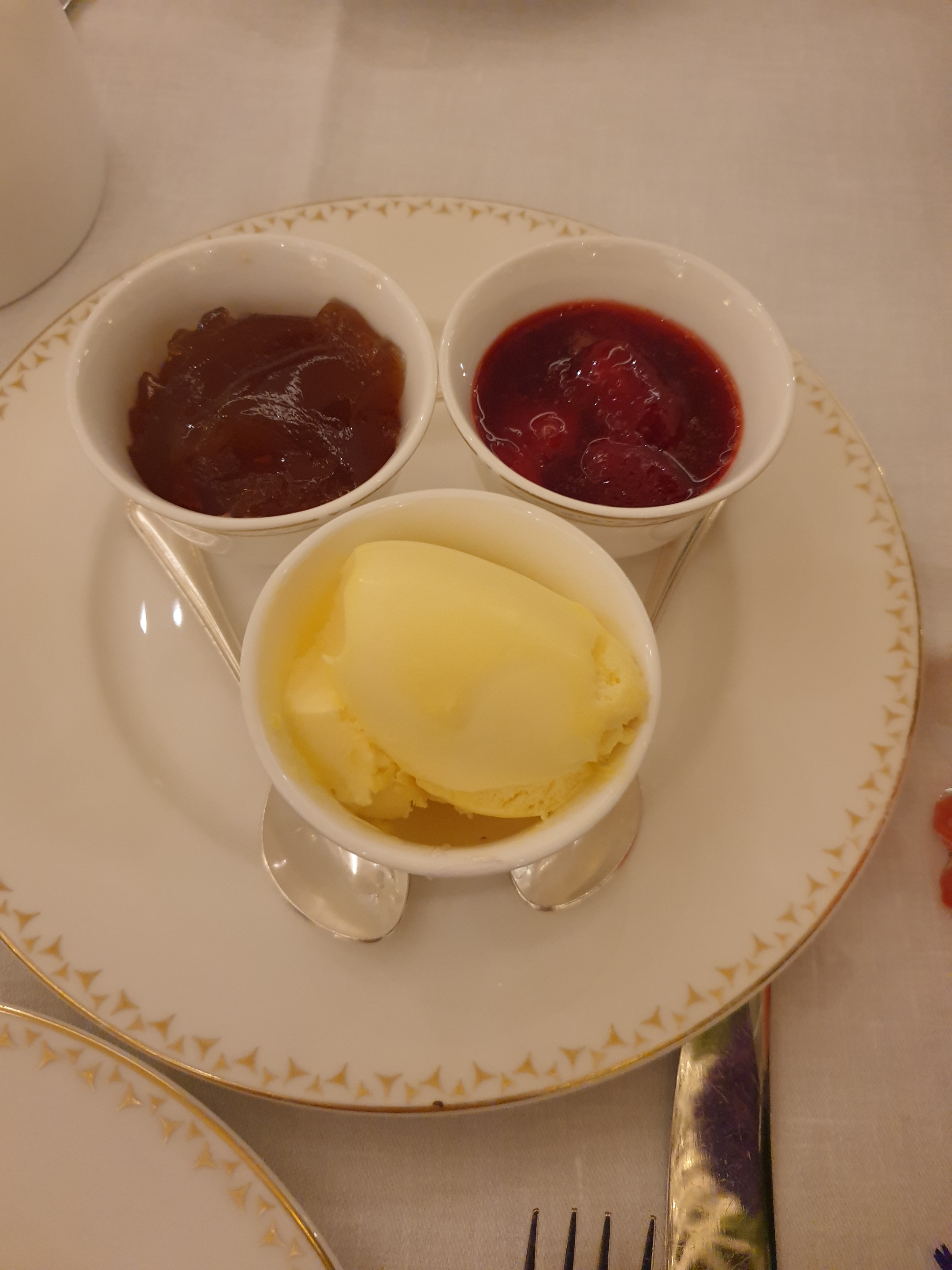 The clotted cream was very stiff. It was nearly impossible to use, as it would not spread at all. We ended up with little chunks of cream perched on top of our jam. There was also, not really enough of it, even given the small size of the scones.

The sweet course had arrived along with the scones, on a two-tier cake stand. 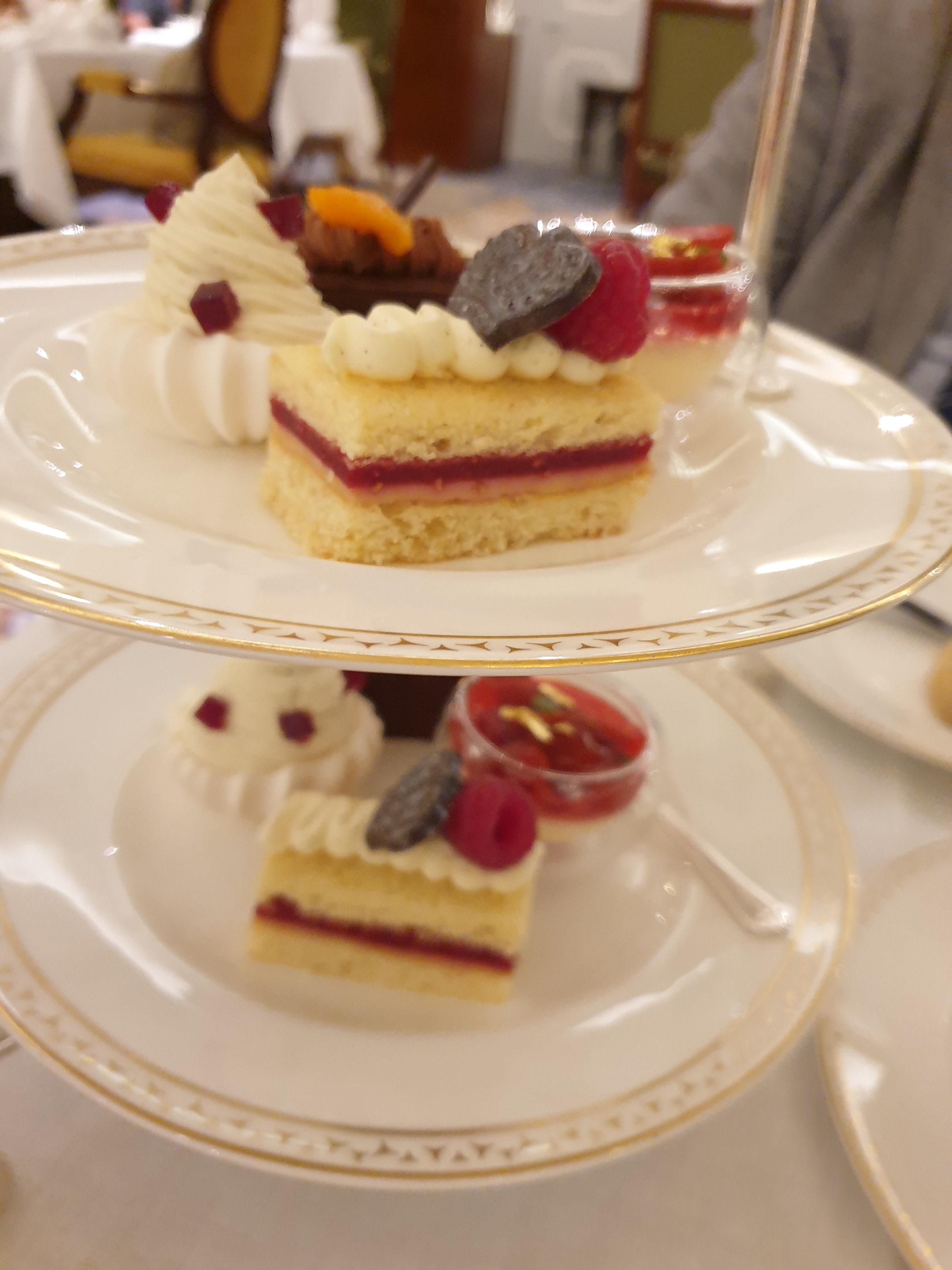 Each tier contained a plate of cakes for one person.

The blackberry Eton mess contained a blackberry inside and little blocks of blackberry jelly on the outside. This was probably my favourite of the four sweets. 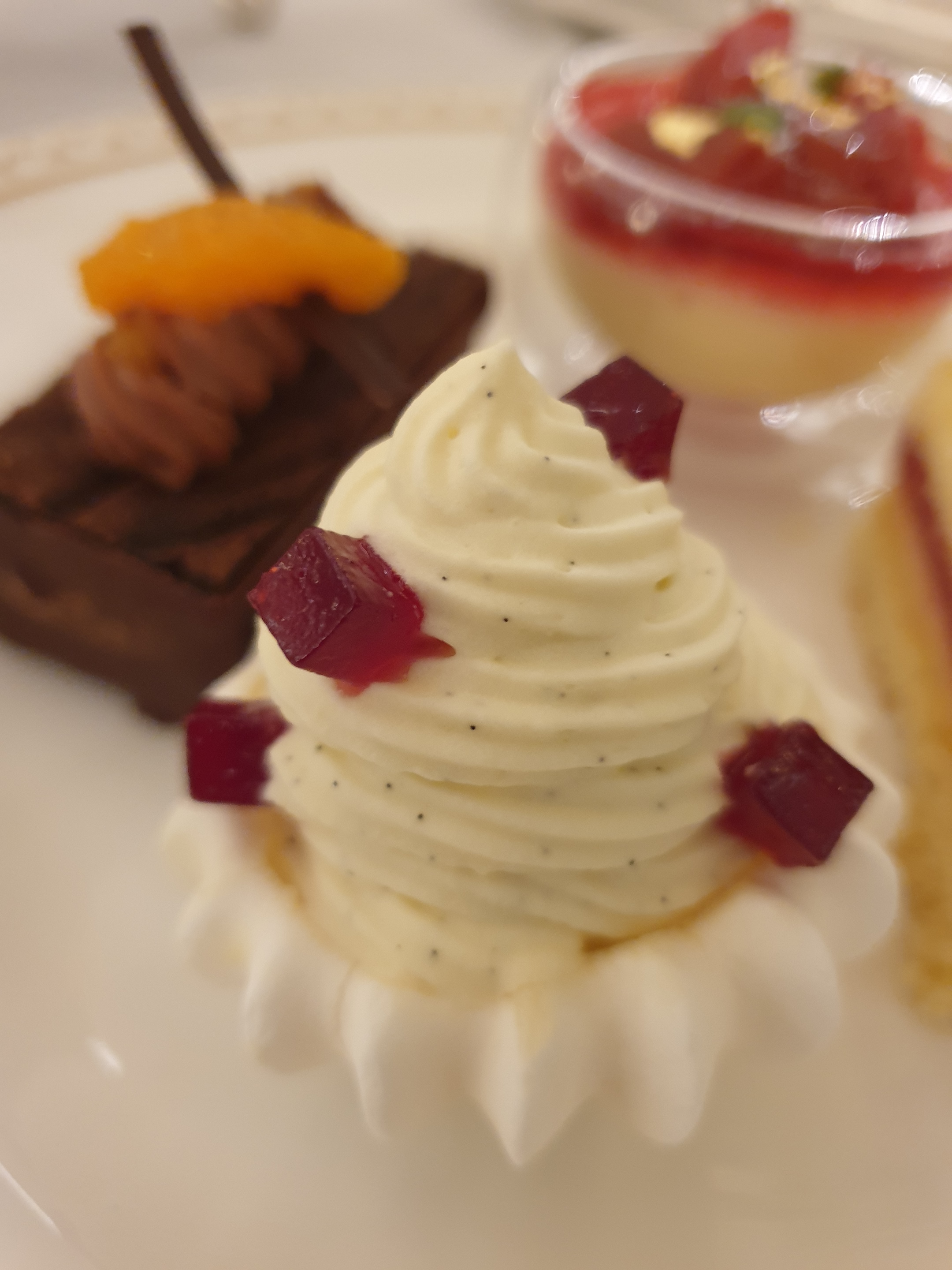 The vanilla Victoria sponge was topped with a chocolate crown. 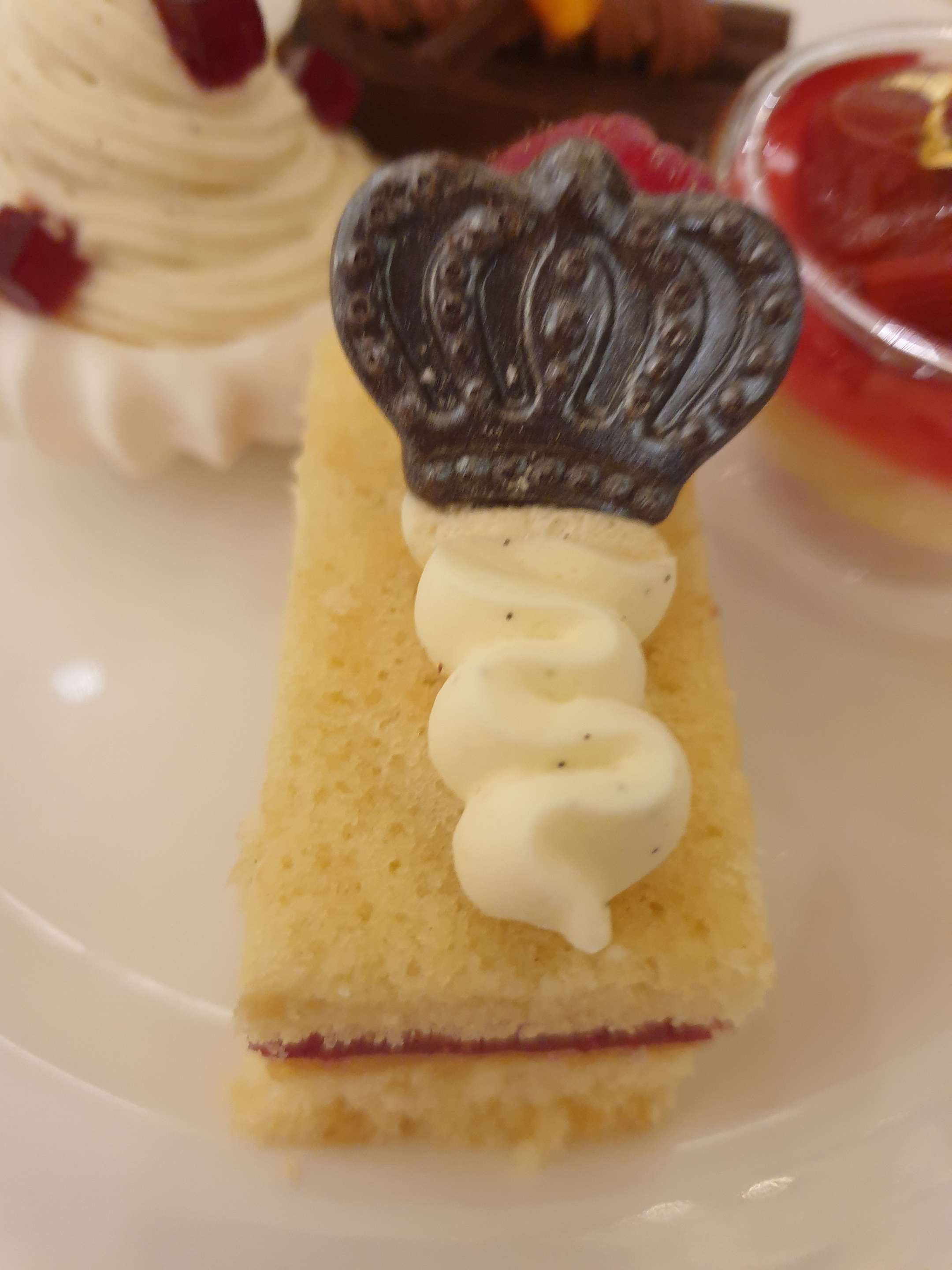 The rhubarb and custard mini dessert was topped with some gold leaf, and was served in a little round insulated glass bowl. 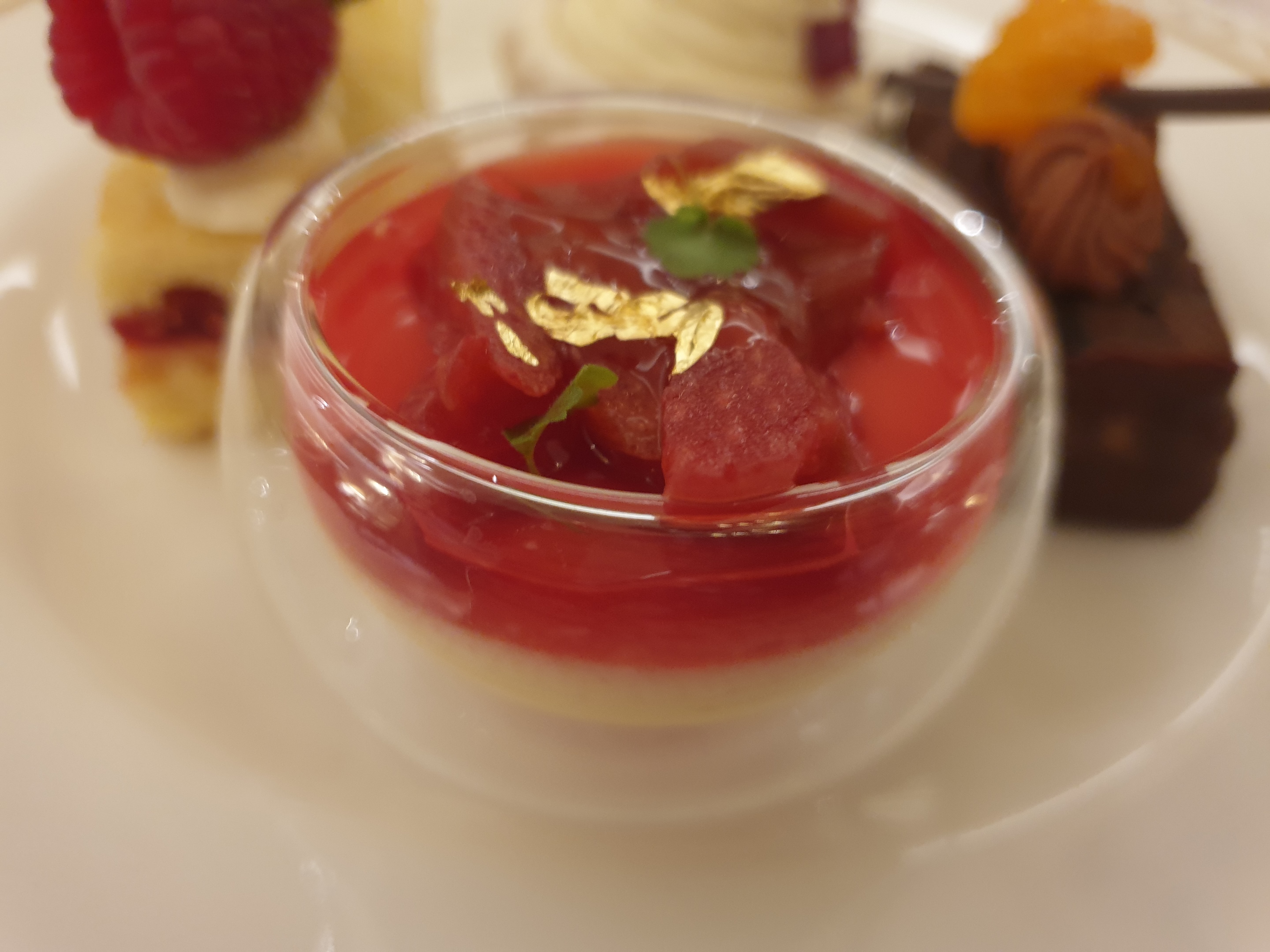 The chocolate orange biscuit cake was my only, slight, let down. And that is mainly because I would prefer just chocolate to chocolate with orange. 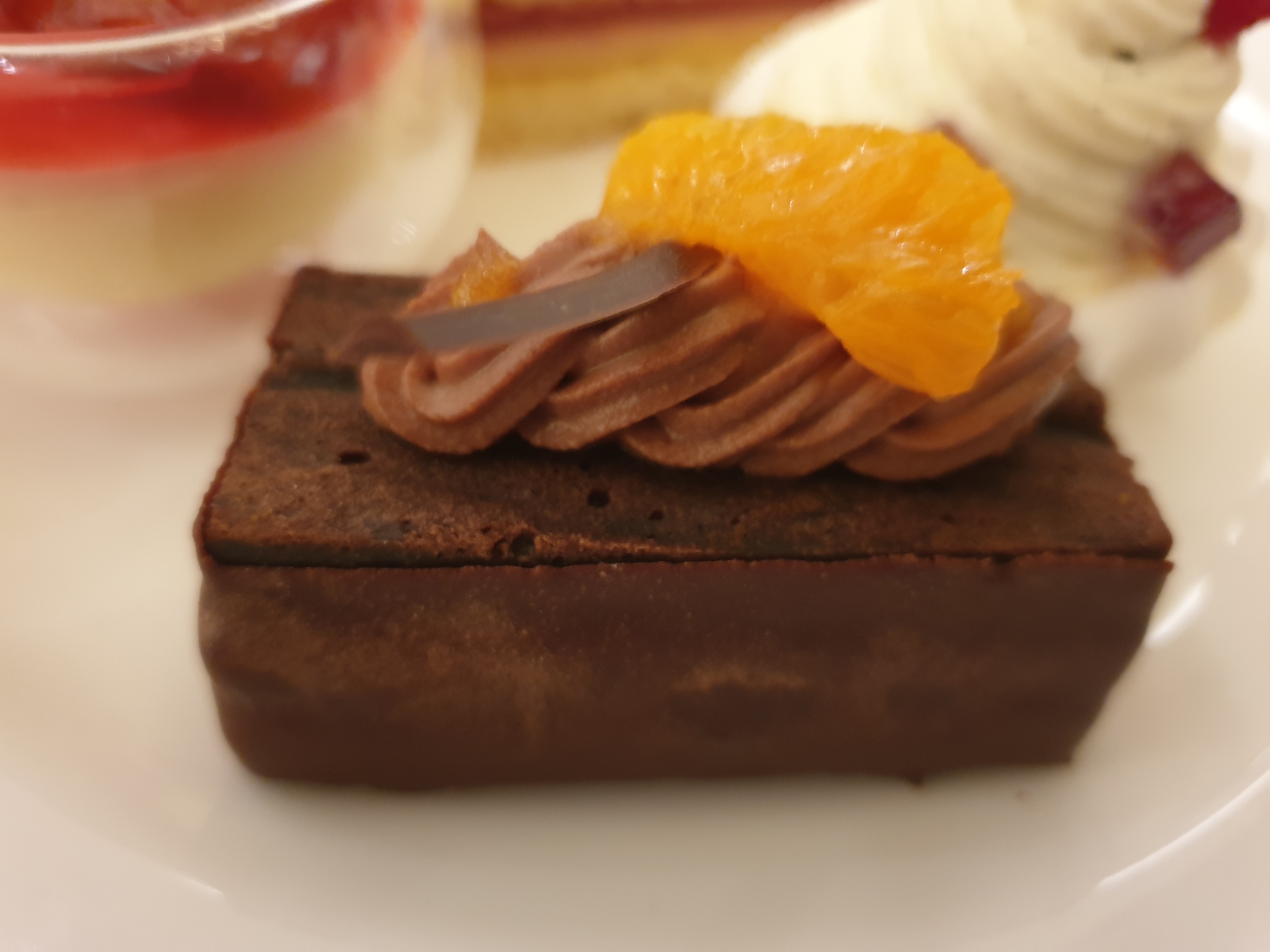 The cakes were all delicious, well made and a little bit special.

Service was, as you would expect from The Dorchester, excellent. It was very attentive, without being too much so. Our only problem was that we were not asked for our tea choice at the start. However, I think they were waiting for us to finish our wine and fruit cocktail before asking us. We were offered a teapot refill before we asked, and were offered extra sandwiches. At the end, we were presented with the bill, which did not have our voucher deducted from it. However, this was quickly, and easily, sorted out.

After we had sorted out the bill, we were brought a fancy purple and white cardboard box to take home. 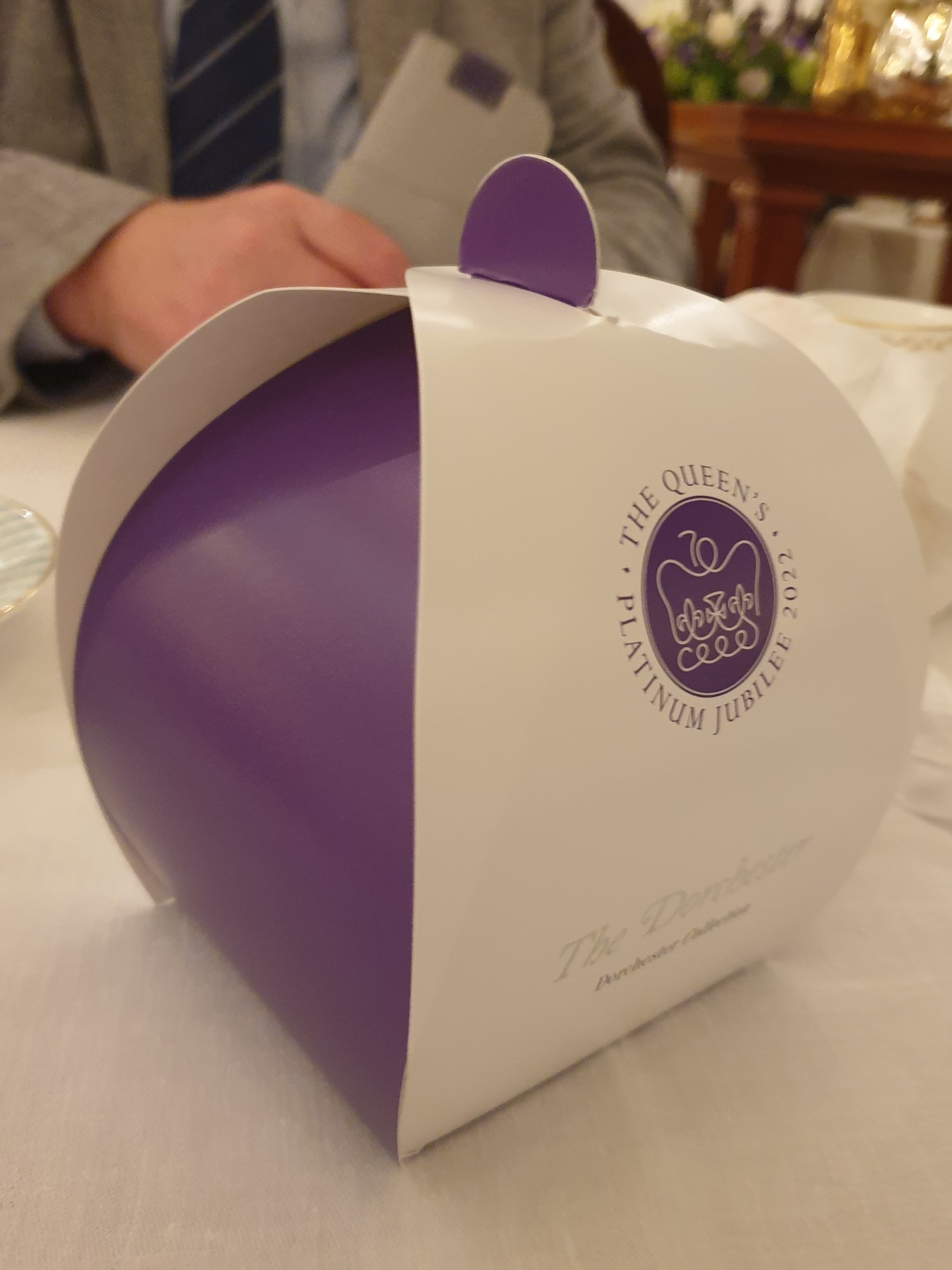 This contained a special Jubilee cake to eat at home. A special touch for this Jubilee Afternoon Tea. 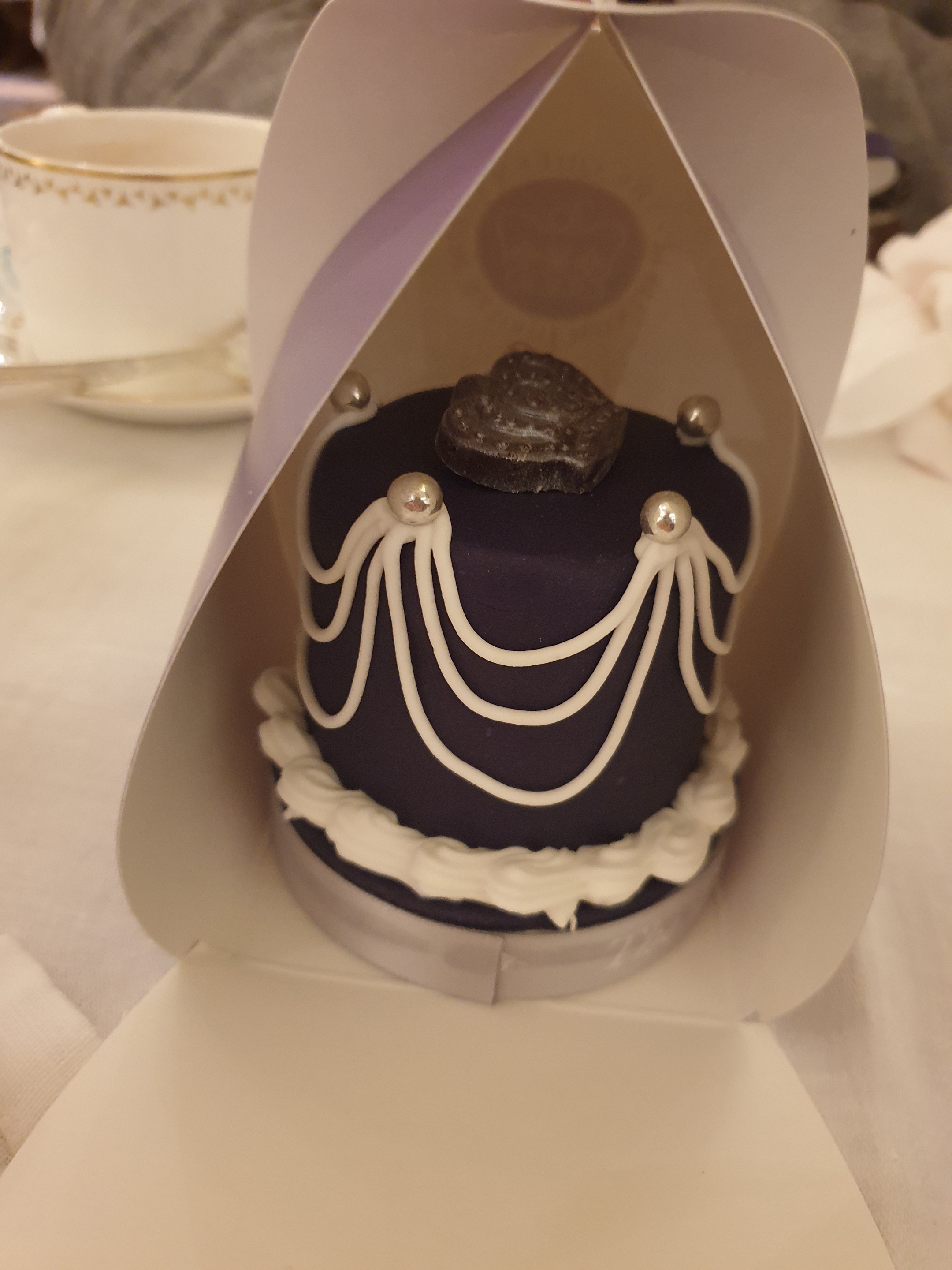 Afternoon Tea at The Dorchester is a costly affair (the usual price is £75 per person. The jubilee Tea cost an extra £20 each). However, this is a top London hotel, and the quality of the Tea is top notch. The beautifully decorated Orchid Room, where we had our Tea, contained only fourteen tables. Whilst we were there, there were never more than thirty people in the room, so it was quiet and relaxing. The whole experience was special and enjoyable. We felt, whilst expensive, it was worth the money. 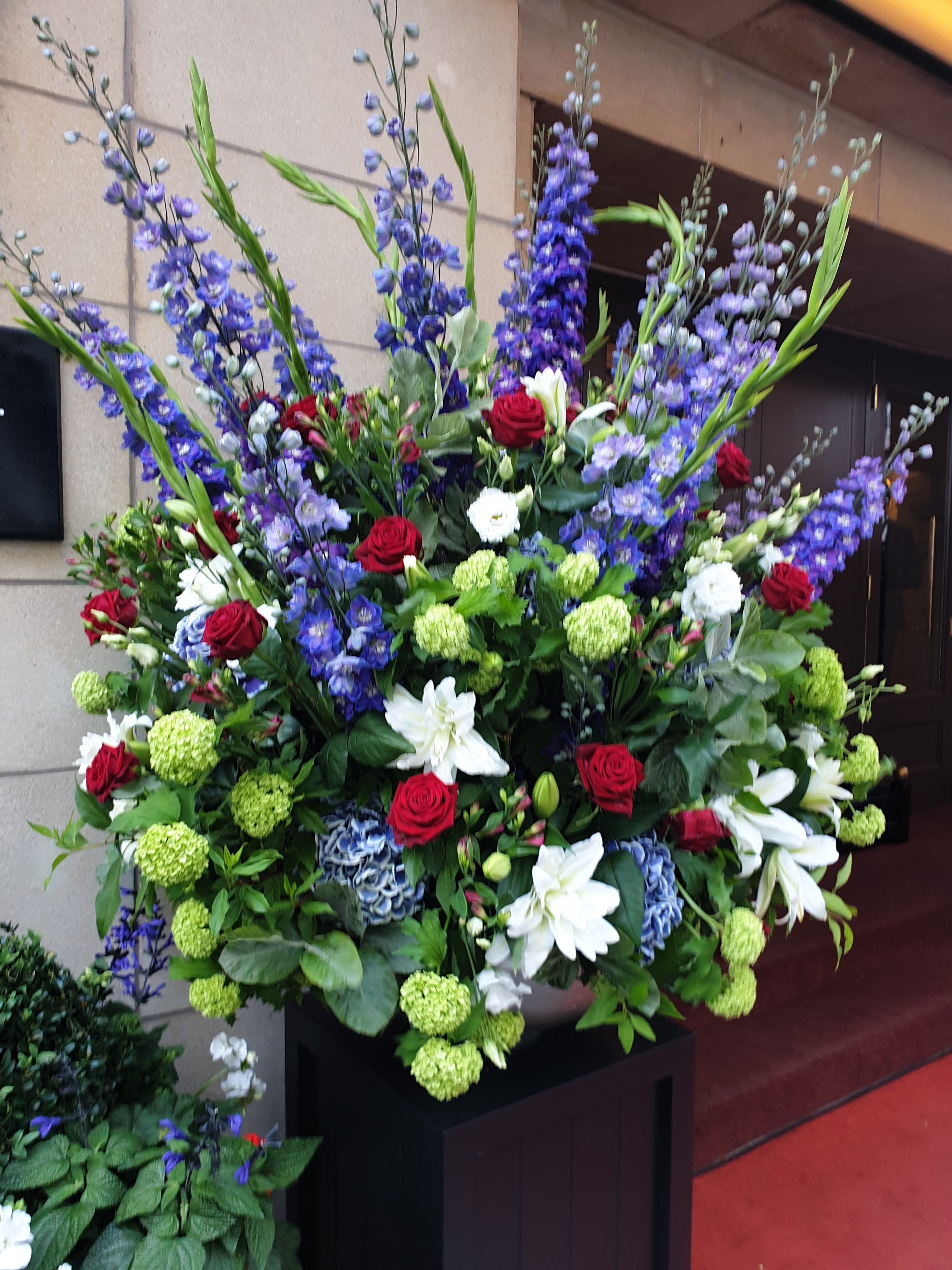