Background – The Elveden Inn is just around the corner from the, until recently, notorious Elveden junction on the A11. The village has now been bypassed but the Inn can still be easily accessed from the new road. It also very close to the Elveden Center Parcs.

The Inn was completely refurbished in recent years from a small country pub into a large, popular restaurant and pub. There are two bar areas, a large conservatory and a large terrace area.

Contents – At least 12 finger sandwiches each!! (smoked salmon with cream cheese, ham and piccalilli, cheese and pickle, prawn), 1 massive fruit scone, a tiny Tiptree pot of strawberry jam, a smallish pot of clotted cream, a small meringue, small slice of lemon drizzle cake, a slice of chocolate torte, a slice of fruit biscotti, a piece of Victoria sponge, a cup of tea which was later replaced with a refillable pot of tea.

Comments – Wow! This afternoon tea was massive! It was served on a three tier spindle cake stand with wooden plates. 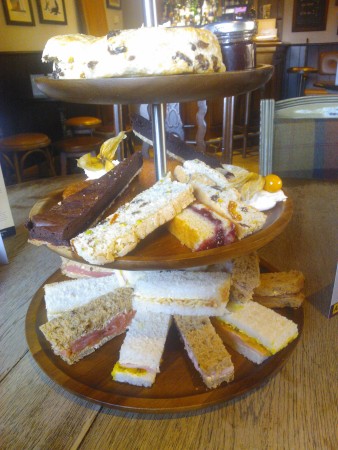 We were first of all served with a cup of tea each. We queried this and were then served with a pot of tea instead. The tea was made with bags.

There were loads of sandwiches! They were all well filled and freshly made. There seemed to be no particular division of the make up, so there were two of some fillings but five or six of others! There was a mix of brown and white bread.

The scone was huge and had been warmed through, however I suspect it had been frozen ready made and de=frosted. It was slightly soggy yet quite hard on the outside.. There was no where near enough jam and clotted cream for the large size of the scone.

There was a really good variety of cakes. The slices were all of a good size and were very tasty. Everything tasted fresh. 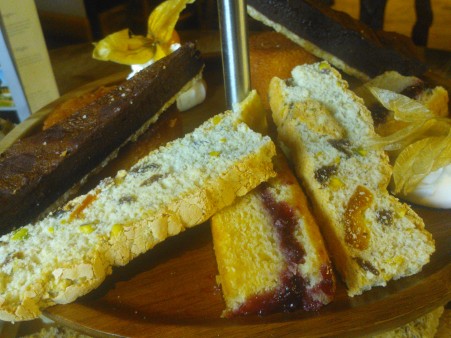 This was the first afternoon tea that has actually defeated me – I couldn’t finish it!! We were offered the option of taking the uneaten portion home with us. What excellent value!

Sadly this afternoon tea is no longer available due to a change in management.