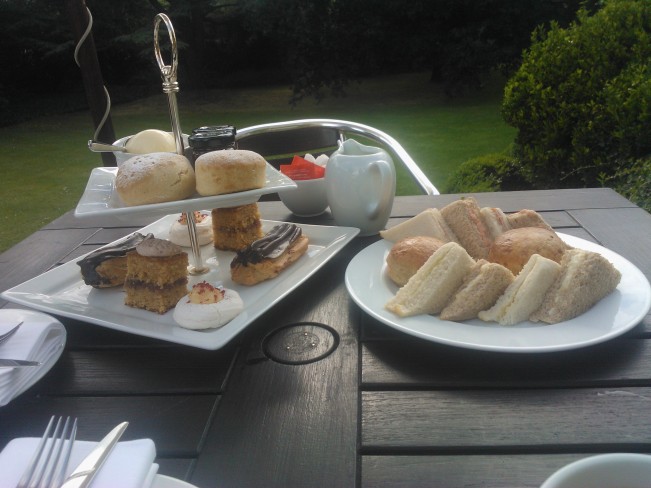 Background – The Hotel Felix is a nice hotel in north Cambridge just off Huntingdon Road. The main building is Victorian and there is a pleasant garden to the rear of the building. There is a terrace area above the garden for sunny days. This afternoon tea needs to be pre-booked.

Contents – 4 triangular sandwiches (sea trout with dill crème frais, egg mayonnaise, ham and tomato chutney, cream cheese and pickled cucumber), a cheese scone, a plain scone, a small pot of Galloway Lodge Preserves strawberry jam, clotted cream, a chocolate and coffee éclair, a small lemon meringue, a small piece of coconut cake. The tea was leaves of your choice in a teapot and was refillable.

Comments – As it was a sunny day we chose to be served on the outside terrace. The tea was served on a two tier spindle cake stand with square white plates with the sandwiches and cheese scone served on a separate round plate. 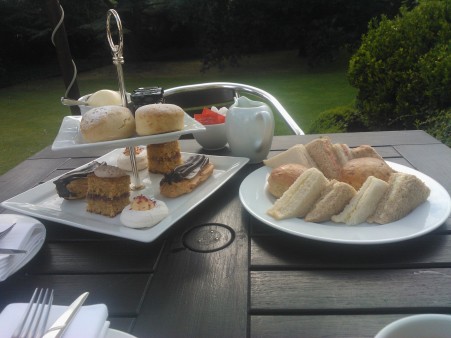 The sandwiches were already going slightly dry on the outside edges but were tasty. The fillings were a little bit different from usual which was a pleasant change. Personally I always prefer ham with chutney rather than the more traditional mustard (which I am not keen on anyway). The trout sandwich was particularly unusual. 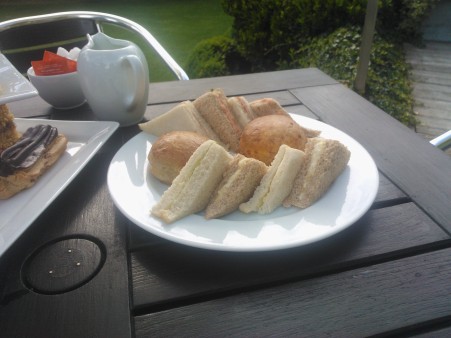 Both scones were of a reasonable size and had been warmed through. The jam was very good and there was enough of it in the little jar. There was plenty of clotted cream. It was nice to be served a cheese scone, especially as it was particularly tasty. It really needed to have a bit of butter with it. However, we later found out that this should have been provided but had been forgotten! 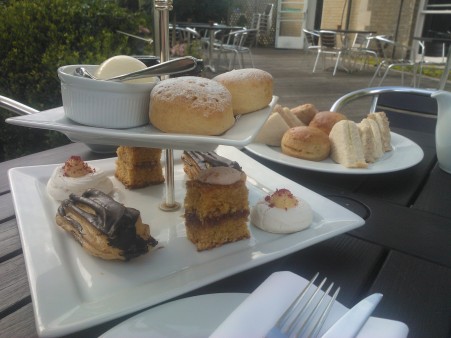 The cakes were cut rather small but were at least tasty and fresh. The éclair was very under filled.

There was a choice of teas, which was leaf tea with a strainer provided. However, the tea was horrendously strong, even after a water top up so we ended up asking for a jug of iced water instead. 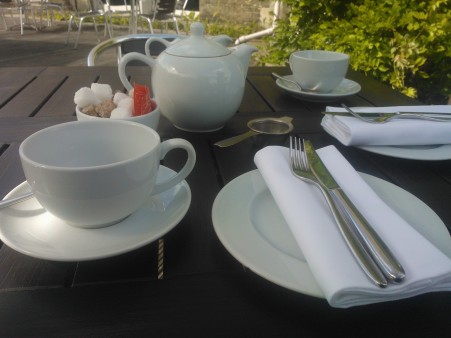 Service was a bit sparse and a little slow with waiters hard to find.