Background – This Afternoon Tea was taken as part of a package which included a 4 hour session in the spa at Elveden Center Parcs. The tea part was served in the Vitale Café which forms part of the Aqua Sana spa complex. The café is located between the spa itself and the treatment area of the spa. It can be accessed without going into the spa but this is not commonly done. The café is a large conservatory area looking out on to a small garden area.

Comments – We were first brought a white teapot filled with hot water between us plus a small jug of milk. The tea bags were in packets on the saucers of the tea cups. There was just enough for two cups each.

The rest of the tea was presented on a three tier cake stand of the spindle type with white plates.

The sandwiches were small and slightly dry but well filled. I suspect they had been made in advance for the bookings they had and had not been covered well.

The scone was warm, tasty and fresh. The amount of strawberry jam was too small to cover a scone each and there was not enough clotted cream. However, we were able to ask for and were given a second portion of each, free of charge.

The cakes were variable with the tiny piece of apple tartlet being the most tasty but ridiculously small. Why serve just a quarter of a small tartlet? Surely a half would have been better. None of the items were particularly large. 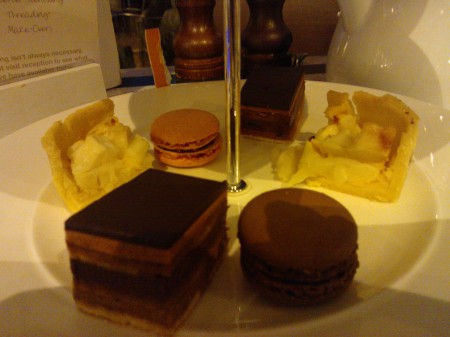 There was a limited choice of teas. We did not ask for the pot to be refilled.