Background – Having been disappointed with our previous tea (The High Tea Club), it was down to The Angel Hotel to come up trumps and get us back on track. Luckily it managed to do this and provided us with one of our new favourite afternoon teas!

The Angel Hotel is a historic hotel in the centre of Bury St Edmunds. It is a lovely Georgian building on Angel Hill facing the Abbey Gardens. The hotel was used by some of the Dad’s Army cast when the original programs were being filmed in the nearby area.

Afternoon Tea preferably needs to be pre-booked as it is popular. It is available in either the restaurant or the lounge area.

There is a set of steep steps at the entrance to the hotel.

Contents – 1 finger sandwich (egg mayonnaise), some smoked salmon on a piece of chargrilled cucumber, goats cheese, parma ham and fig on bruschetta, a small sausage roll and a half of a good sized scotch egg. 1 fruit scone, a small jar of strawberry jam and a small bowl of clotted cream. A small square of lemon drizzle cake, a small square of chocolate cake, a small éclair, a white chocolate profiterole, a square of pineapple and coconut marshmallow and a small strawberry pavlova. Tea was loose leaf.

Comments – We had a table reserved for us in the restaurant. It was laid with white china and no tablecloth. Our order was taken quickly. The tea arrived quickly and was in a white china teapot. A tea strainer was provided as the tea was loose leaf. 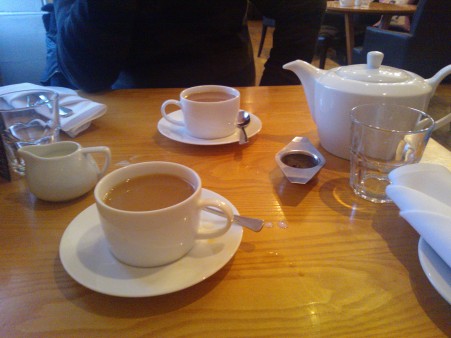 The rest of the Afternoon Tea was presented on a three tier spindle cake stand with neon coloured (ours was purple) perspex plates! It looked rather good and was definitely different from the usual!

The egg sandwich was fresh and well filled. The bruschetta was interesting but the chargrilled cucumber was a little odd – a floppy piece of blackened cucumber with some salmon on top. The sausage roll was very good but my favourite part of the savoury section was the scotch egg, which was delicious. A really good addition to the Tea. 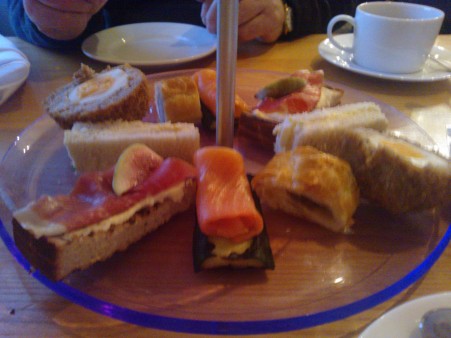 The scone was a reasonable size and was well fruited. It was definitely homemade and fresh. There was only one tiny pot of jam for the two of us so we asked for a second pot and it was provided for us. The portion of clotted cream was barely adequate for the scones.

The cakes were fresh and tasty. The individual pieces were quite small but as there was a good variety of different items there was more than enough. The lemon drizzle cake and the mini Pavlova were my favourite items. 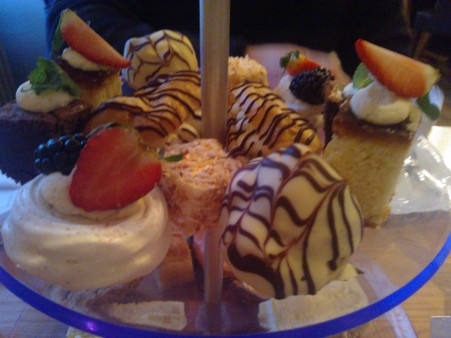 The tea was rather too strong in our opinion.

Service was a little sporadic as the waiters were busy setting up for dinner service. We asked for and got a refill of the teapot and we were provided with an extra pot of jam on request. However, it was quite hard to attract the attention of the waiters.

On the whole this was a very good tea.