Note – This venue is now closed.

Background – We wanted to find a venue offering a Valentines Day Afternoon Tea. Having searched on the internet I found a new venue in Cambridge that we hadn’t heard of or visited – The High Tea Club in Mill Road. We rang and made a booking for their Valentines special tea.

The venue is interesting. It is a small café which specialises in offering different teas and in Dim Sum! They also offer an afternoon tea on their menu, however the Valentines Day tea seemed to be only available if pre-booked.

Comments – We had a table reserved for us in the small tea room. Our table was in a quiet corner in a little alcove. Our order was taken quickly but it was difficult to understand what the tea would consist of, despite asking. We were told it was for two people. We were also told we could buy extra cake but there was only a choice of two (slightly unusual) varieties available.

We were first of all brought a small stainless steel teapot between us having chosen from a huge list of different teas. The tea was loose and we were brought a tea strainer as well. We had to ask for milk (and were offered semi-skimmed or hot!!). 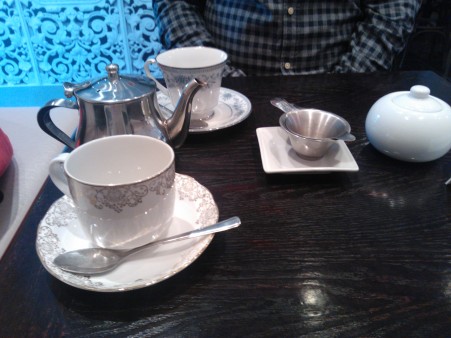 The rest of the Afternoon Tea was nicely presented on a three tier spindle cake stand with non-matching china plates. However, it was immediately obvious that this was far too small to be an afternoon tea for two people. In fact it was on the small side for one person! 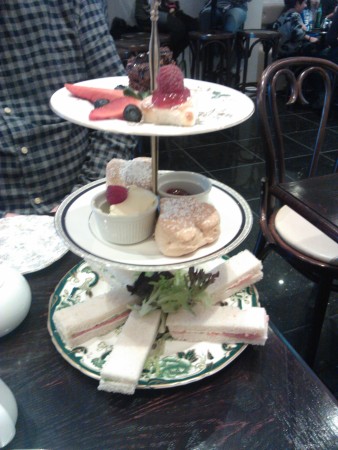 The sandwiches were fresh and reasonably well filled. There was a small bit of lettuce to decorate the plate (and fill it up a bit!). The smoked salmon sandwich was the best of the three. The egg mayonnaise was a little under filled whilst the salami was just a very bizarre choice (and definitely not one I was keen on!).

The two scones were rather on the small side as they were heart shaped. There was one fruit scone and one plain so we had half of each scone each. The portions of both strawberry jam and clotted cream were so small they were ridiculous, even given the tiny size of the scones!

The most disappointing part of the tea was the cakes. There was a piece of chocolate brownie and a piece of plain sponge (each about 1 cm deep!). There were just these two very small pieces of cake BETWEEN the two of us! They were really too small to cut in half but this was a Valentines tea so we shared the two pieces. Both were fresh and probably tasty, they were just stupidly small.

Despite the café promoting itself as a tea specialist the tea was on the weak side. There was only enough for one teacup each and about half a cup left between us. We were not offered a refill.

This tea was visually pretty, though there was not much on any of the tiers. It was lovely to have the cakes and scones cut in a heart shape. All of the items were fresh and tasted good. However, there was nowhere near enough tea on the stand for two people. We had come to this new venue with high expectations and they were sadly not fulfilled.