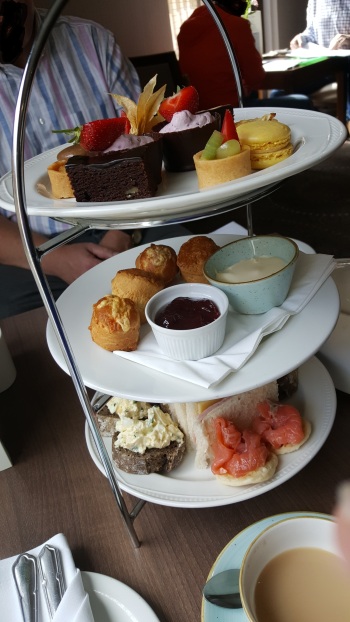 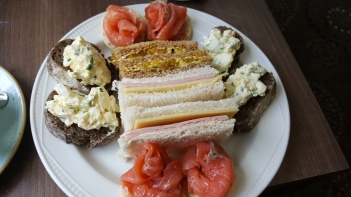 Background – Cambridge City Hotel is a large modern building right in the centre of the city of Cambridge. It faces on to Downing Street and backs on to the Lion Yard carpark. The lounge and bar area where Afternoon Tea is served is on the first floor, reached by escalator. The lounge has lovely views out onto historic Downing Street and the Museum of Archaeology and Anthropology.

The lounge area was comfortably furnished with armchairs and low tables. However, it is a large open area and not very cosy.

Contents – 2 finger sandwiches each (Cheese and ham and Coronation chicken}, 2 blinis with smoked salmon on top, 2 egg mayonnaise on rye bread, 1 tiny plain scone, 1 tiny cheese scone, a dish of strawberry jam and of clotted cream. A tiny fruit tartlet, a tiny apple tartlet, a macaroon, a small piece of chocolate brownie, and a chocolate cup with raspberry splodge inside. The tea was made with tea bags.

Comments – We were sat on comfortable chairs in the lounge area next to the large window, with views out onto historic Downing Street.

The tea arrived first in a white china teapot. We were then brought the rest of the Afternoon Tea on a three tier cake stand with round white plates.

The sandwiches were unusual in that they were a mix of traditional sandwiches and open sandwiches. We liked this but there was a lot of smoked salmon on each of the small blinis which was my least favourite. I preferred the Coronation Chicken sandwich and the egg mayonnaise on rye bread. 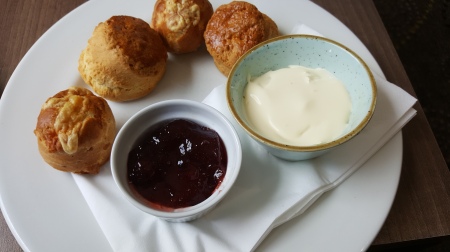 The cakes were all good but, again, the two tartlets were incredibly tiny! Smaller than the macaroon! The finger of Brownie was delicious but also quite small. The best was the chocolate cup containing raspberry mousse which was really tasty. It was fun to able to eat the container it was served in as well as the contents!

The tea was of a good strength. We managed to get the pot refilled.

The service was reasonable though it was quite difficult to find someone to pay!