Background – This was to be our final Afternoon Tea during Afternoon Tea week 2017.  We were originally going to book at Camellia Cottage in Sheringham but were told that ringing them the day before we wanted Afternoon Tea did not count as twenty four hours notice (!!!!!) so we decided to go elsewhere. We found Browne’s on Bond Street in Cromer and gave them a call instead. Our call was answered by a friendly man who told us that booking was not necessary but was helpful. We booked for the next day.

We have been to Cromer many times before but have never spotted this little café on a side street near the church. However, having found it now, we will definitely be back! What a find!!

The café has just a few tables, including two in the window, one of which we chose.

It also has a pretty little terrace garden with a few tables and a water feature. Unfortunately, we visited on a rainy day so were limited to inside. 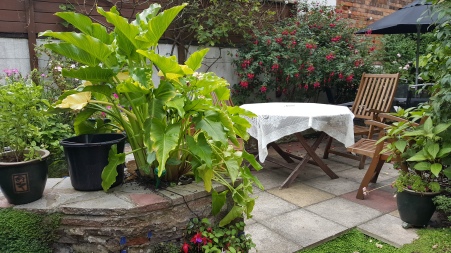 The owner described their Afternoon Tea as ‘rustic’. To us it was wonderful! We love to be served slices of cake rather than fancy little bits (although we don’t mind those either!), and all the little extras just made this a really good Afternoon Tea. One of the best we have had!

Contents – Four finger sandwiches each (two of ham and two of cheese and pickle) served with salad, a bowl of chopped beetroot, a bowl of coleslaw and a larger bowl of crisps. One large fruit scone, a small pot of strawberry jam and a small pot of whipped cream. Four slices of cake (banana cake, apricot cake, coffee and walnut cake and Victoria sponge cake), a small piece of summer berry flapjack and a little bite of chocolate brownie. The tea was made with tea bags.

The tea arrived first in a pretty china teapot. It was accompanied by a jug of milk and a stainless-steel jug of boiling water to top up the teapot. We were also told we could ask for further refills as required.

We were next brought a plate containing bowls of beetroot, coleslaw and crisps.

Then a two-tier spindle type cake-stand arrived containing the sandwiches and two slices of cake each. 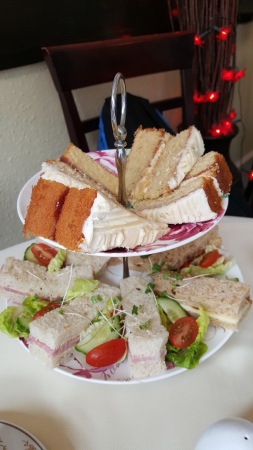 We were just wondering where the scones were when we were given a second two tier spindle type cake-stand containing two large scones, the cream, jam and some sliced strawberries, PLUS two more slices of cake each and the flapjack and brownie!! Wow! And everything looked so tasty! 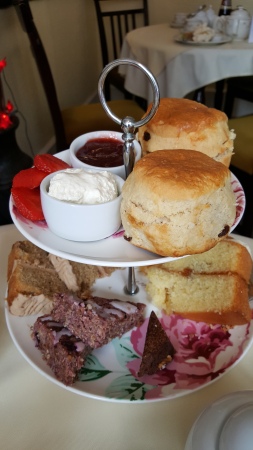 The sandwiches were well filled and freshly made. The ham was on white bread whilst the cheese and pickle was on brown bread. The sandwiches were surrounded by a good amount of salad. It was a really nice addition to have crisps, coleslaw and beetroot as well.

The scone was warm and fresh and very large. Unfortunately, the only down side was that there wasn’t really enough jam and was nowhere near enough cream for the large size of the scones! Also, the cream was whipped rather than clotted but this really was a minor niggle given the quality of the Tea on the whole.

The cake section of this tea was really special. There were four nice sized slices of cake each. They were all really good and very fresh. The flapjack was interesting and tasty and the little piece of brownie was delicious.

There was so much that we were actually beaten for once and had to take up the offer of a box to take the remains home!

This is very rare for us but meant that we could continue to enjoy this lovely Tea the day after as well.

The tea was of a good strength for us and we were offered a refill more than once. We had one refill.

The service was good and very friendly from the family (Mum, Dad and son) who run the café.

We later found out the it was the birthday of the Mum who had made all the cakes and other food! I hope she was able to enjoy some of her lovely cakes for herself.

One thought on “Browne’s on Bond Street, Cromer, Norfolk.”