Background – We were given a voucher from Buyagift for this Afternoon Tea.

Congham Hall Hotel can be found not far from Kings Lynn and Sandringham in North Norfolk in the village of Congham. It is a lovely looking hotel 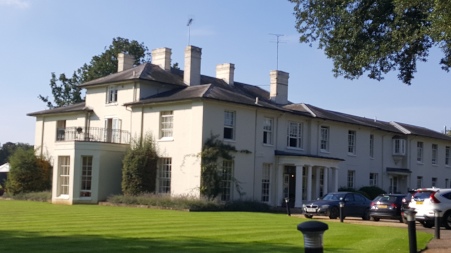 and some beautiful gardens. 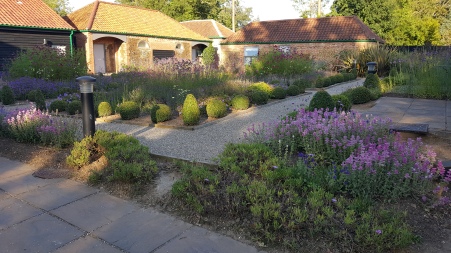 It also has a small pool and spa area.

To the rear of the building there are two terrace areas overlooking a lawn and the fields beyond.

There are several tables with parasols situated on these terraces for sunny days. 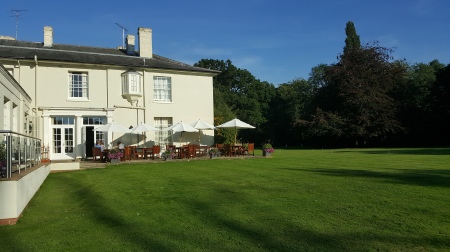 Contents – Five finger sandwiches each (ham and tomato, cucumber, smoked salmon and cream cheese, egg mayonnaise and cheese). A small plain scone and a small fruit scone plus a dish of strawberry jam and a dish of clotted cream. A macaroon, a tiny sponge cake, a square of lemon cheesecake, a square of chocolate brownie and a piece of pistachio biscotti each. The tea was made with loose leaf tea with a choice of several varieties.

Comments – We were offered several areas in which to eat our Afternoon Tea, including the lounge and the restaurant. We chose to sit outside on the terrace looking out onto grass and fields beyond as it was such a lovely sunny day. There were a few other people outside on other tables including one couple who were smoking. Luckily, that couple finished their drinks and moved away soon after we arrived.

As soon as we sat at the table a waiter appeared who offered us a jug of iced water. It was a very warm day so we appreciated this a lot! The water arrived quickly with plenty of ice.

We were then served the tea in a chunky white china teapot. We were also given a pot of hot water and a jug of milk. 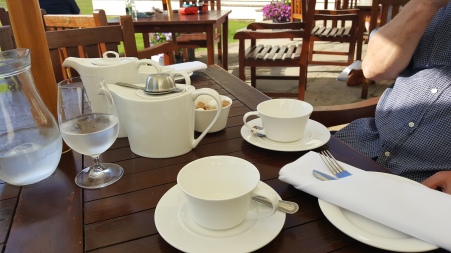 The Afternoon Tea then arrived shortly after on a three-tier cake stand with pretty glass plates. 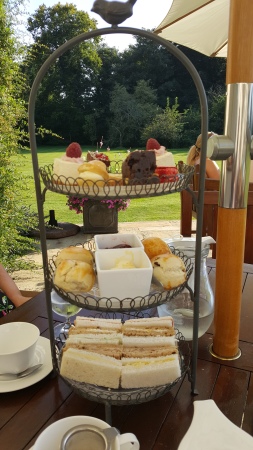 The sandwiches were a little sparsely filled but were freshly made and were still tasty. There was a mix of brown and white bread.

The scones were fresh and tasty. They were not huge but there was two of them each and they tasted good. There was about the right amount of jam but barely enough clotted cream. 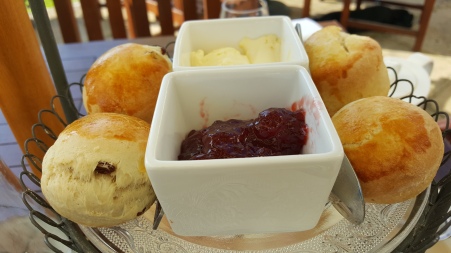 On to the cake course. Again, the cakes were quite small, but there were five items each which made up for that in part. All of the cakes were good, just a little small! The tiny sponge was a ridiculous size but there was slightly more of the cheesecake and brownie. Both of these were particularly good and I would have liked to have more of each! The macaroon was not the usual bought in affair and was actually tasty and slightly sticky. Just as it should be!

The tea was made with loose tea leaves with a strainer provided. We chose the afternoon tea blend which was an Assam tea. It was rather on the weak side. We didn’t ask for a refill as we had had the cold water as well as the tea and didn’t need anything else.

Service was excellent on arrival, however, no one came to ask if we wanted the teapot refilled or to see if we needed anything. I don’t think it would have been difficult to get attention though and it was quite nice to be left alone to enjoy the Tea and sun.