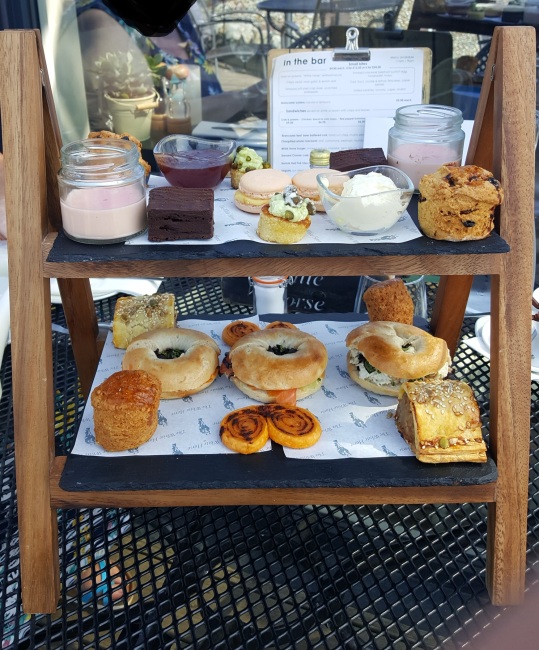 Parking and Access – There is a large car park next to and behind the pub. Inside, there is flat access to the ground floor of the pub, including to the conservatory area and to the terrace behind.

There are beach hut themed toilets available near the front entrance.

Background – We first visited The White Horse whilst taking a walk along the coastal footpath that passes behind the pub’s carpark in the middle of winter. We said then that it looked like they did good food and that we would try to come back one day. We didn’t realise they did an Afternoon Tea as it wasn’t available at that time.

When looking for somewhere different to go, The White Horse popped up as offering Afternoon Tea. This was definitely a good opportunity to return and to try the food that had caught our attention on our first visit.

The White Horse is located on the main coast road and backs on to the marshes and Brancaster Staithe. The view over the marshes towards the sea, with the various little inlets and small boats is breath-taking.

Contents – Three half bagels each (smoked salmon, chicken with sweetcorn, and something vegetarian, possibly a mild hummus?) plus a pork and leek sausage roll, a Norfolk Dapple cheese and Colman’s mustard scone and a tomato and pesto palmier. One small fruit scone, a small dish of strawberry and a small dish of clotted cream. A tiny olive oil cake with pistachio and white chocolate buttercream, a small piece of chocolate orange gateaux, a passionfruit macaroon and a pot of lemon and hibiscus posset. A pot of tea.

Comments – On arrival, we were asked if we would prefer to sit in the conservatory or outside on the terrace overlooking the salt marshes behind. It was a beautiful day so we chose to go outside at a table with shade. The view towards the sea was beautiful.

We were given plates, knives, paper napkin and a teacup and saucer each, plus a glass. 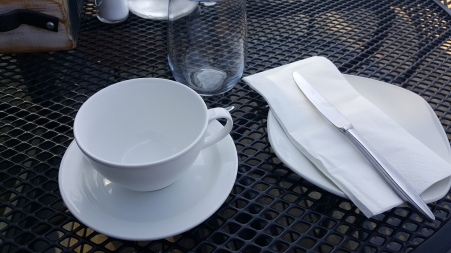 We were also brought a carafe of iced water. 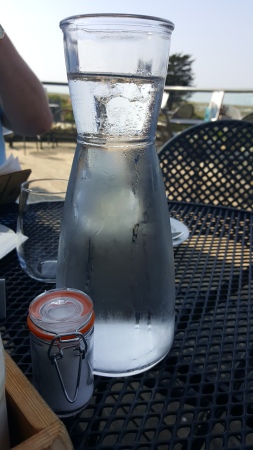 The tea arrived quickly in a large white pottery teapot along with a small bottle of milk. The tea was made with loose leaves so we were provided with a tea strainer as well. It was of good strength but we found it got cold really quickly once it was poured, due to the slight breeze outside. We were offered a refill of the pot. 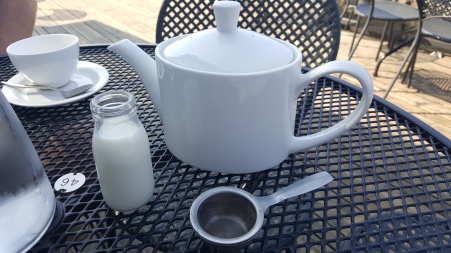 The Afternoon Tea, which we had booked ahead, arrived after a short while on an interesting easel type stand with two layers of slate. It was well laid out and looked very good!

We started off with three filled bagels which had each been cut in half so that we had a half each. They were all well filled, especially the chicken with sweetcorn one. One contained a red paste which we couldn’t identify. We thought it was probably a very mild tasting hummus of some sort.

There was a small but tall cheese scone each. We asked for a bit of butter to spread on the scone. It was very tasty and was nice and fresh. We also had a tomato and pesto palmier which was nice enough but I felt it would have been better with a bit of cheese in it.

The menu we were given at the table stated that we were having a chestnut and chutney sausage roll. However, ours appeared to be pork and leek and were absolutely delicious! Also, they were a good size. The sausage rolls were easily the highlight of the savoury section, all of which was very good. One of the best savoury sections we have had for a long time.

The small (almost medium sized) fruit scone was tasty. It would have been even better if it had been warmed up but it would probably have got cold again by the time we were ready to eat it anyway. There was plenty of strawberry jam and clotted cream. 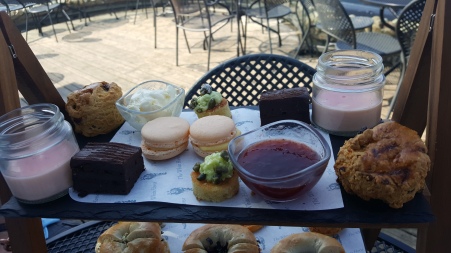 We started the cake section with the tiny olive oil cake. To be honest, it was so tiny it wasn’t worth bothering with! The chocolate orange cake and the passion fruit macaroon were both nice, although the macaroon wasn’t at all sticky, just hollow. But the best part of the cakes was the lemon and hibiscus posset which was really delicious. I was worried when I saw it contained hibiscus as I am not usually keen on flowery flavours. However, this was really good and I would have happily eaten a whole bowl full!

The service was good with waiters passing regularly. We asked for several things, butter, more tea, teaspoons for the posset, etc, all of which were provided with a smile.

And to top it all, we had that wonderful view over the marshes towards the sea. 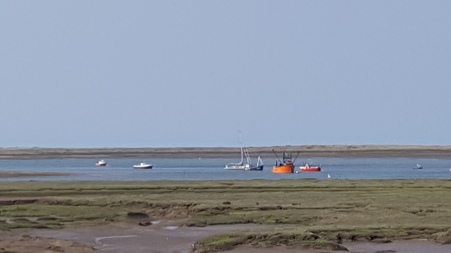