Parking and Access – There is a very large car park next to the garden centre with plenty of parking space. However, due to the layout of the centre, it is quite a walk to the café area. However, there is a small door in the corner of the building that gives direct access to the café via a few steps. I don’t know if this entrance is always available but it was certainly in use when we visited. There are toilets available.

Background – We were looking for a specific type of paving for our garden and had not been able to find it locally so we were trying other places further away. Having visited the landscaping area of Wyevale near Royston, unsuccessfully, we decided to try their café for a cup of tea as it was an incredibly hot day.

On arrival at the café, we spotted the cakes on display. We were in the process of choosing a cake to try when we spotted a sign advertising their Afternoon Tea which also stated that no pre-booking was required. We had not had lunch so we decided that we really should try the Afternoon Tea instead. After all, I’m sure you will agree, it is my duty to try it so that I can review it. It’s a hard job!!

Unfortunately, I didn’t take any photos apart from those I took of the actual Tea.

Contents – Three finger sandwiches each (three of each of ham with cucumber and cheese with cucumber). One medium sized fruit scone, a mini Tiptree jar of strawberry jam and a small pot of Rodda’s clotted cream. A macaroon, a triangle of fudge brownie, a finger a Bakewell and a stripy meringue topped with clotted cream and half of a strawberry. A pot of tea.

Options Available – There were no options available.

Comments – We ordered our Afternoon Tea at the counter in the café and went to sit down. It was a ridiculously hot day but we could not see an outside area, so we sat near an open door. As we were leaving we discovered there was an outside area with several tables and some umbrellas. The area was empty so I assume no-one else had found it either!

We were brought a round white teapot, two small jugs of milk and two teacups and saucers.

This was followed a short while later by the rest of the Afternoon Tea on a three-tier metal stand with round white plates. We were also given a round white plate each but had to go and find a knife and paper napkin each. 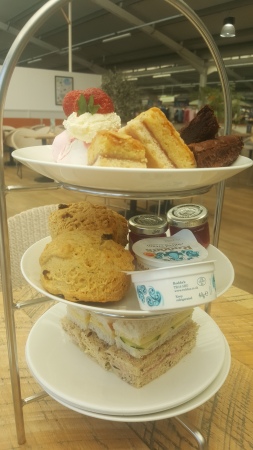 The tea was made with teabags. It was quite strong. However, there was only enough in the pot for two and a half teacups full in total!! We didn’t ask for a refill, despite the ridiculously small amount of tea as we had spotted a notice about paying for teapot refills.

There were six sandwiches between us. Three each of two different fillings. We cut one of each in half so that we had one and a half of each filling. The fillings were on the sparse side and both the ham and cheese were thin processed slices with incredibly thin cucumber on top.

The scone was reasonably fresh and was quite tasty. There was plenty of both strawberry jam and clotted cream. 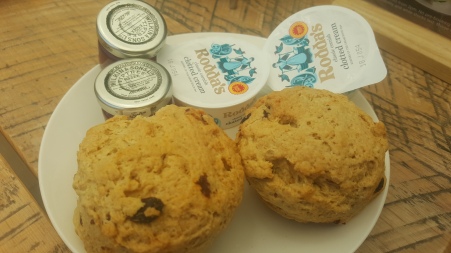 The macaroon looked like a mass produced one but was still slightly sticky inside and was quite nice. Both the Bakewell and the brownie were tasty but a little on the small side. Finally, the meringue had not dried out enough and was a bit raw on the inside. However, it was still edible and was perfect for a hot summers day.

The service was barely adequate but was what you would expect in a large garden centre café, even though there were very few customers at the time.

This Afternoon Tea was a spur of the moment decision for us and, given the price, was more than adequate. It was definitely what I would call a ‘cheap and cheerful’ Afternoon Tea.