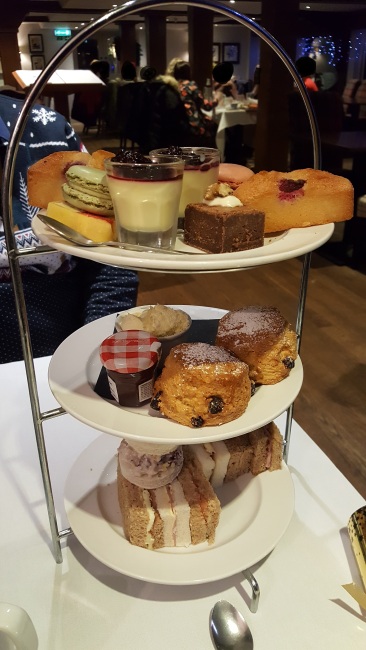 Parking and Access – There was some parking right outside the front of the hotel, near the entrance. The rest of the parking is found behind the hotel where there is a car park. There were small steps both outside and inside the entrance to the hotel but it was possible to easily avoid these and enter on the level. There are toilets near to the restaurant with flat access.

Background – We visited the Mill Hotel in Sudbury back in October using a voucher bought from Travelzoo. We had purchased two vouchers at the time with the idea of returning when the Festive Afternoon Teas were available. This was our return visit.

Contents – three rectangular sandwiches (smoked salmon with cream cheese, ham with chutney and brie with chutney), one round sandwich (turkey with cranberries. 1 medium spiced fruit scone, a mini Bonne Maman pot of strawberry jam and a pot of clotted cream between two. A mini dessert of lemon posset topped with blackberries, a mini Battenberg, a macaroon, a small piece of chocolate brownie and a finger of Madeira cake with a raspberry. A glass of Prosecco and a pot of your choice of tea.

Options Available – No options were available for this Tea.

Comments – We arrived at the Mill Hotel in Sudbury in the dark as we had a 4.30 booking for our Afternoon Tea. This meant that we could really appreciate the Christmas lights and decorations.

The decorations then continued down the corridor leading to the restaurant and bar. It was all very pretty.

We were given a table next to the turning mill water wheel.

The table was laid with blue and white china with a linen napkin. There was also a thick paper napkin holding a knife and fork. There were also two Christmas crackers in the middle of the table. 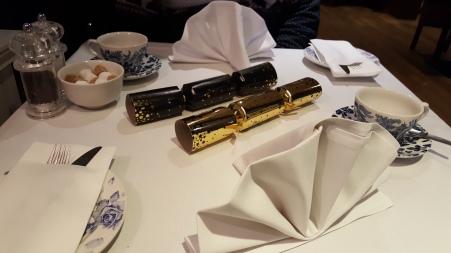 We were asked for our tea order soon after we were seated. We chose our usual English breakfast tea.

The tea arrived quickly in a large white teapot along with a white jug of milk. 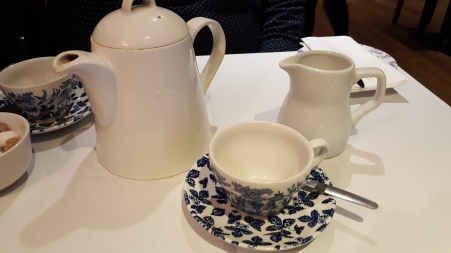 The glasses of chilled prosecco arrived just after we had poured out a cup of tea each. 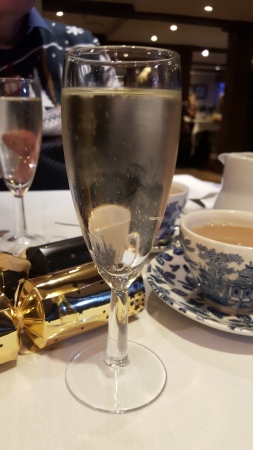 The tea was on the strong side but was nowhere near as badly made as the tea we had been served on our previous visit. We asked for a top up of water in the pot later and were brought a new smaller teapot full. The tea was made with teabags.

The Afternoon Tea itself was served on a plain metal three tier cake stand with round plain white plates. 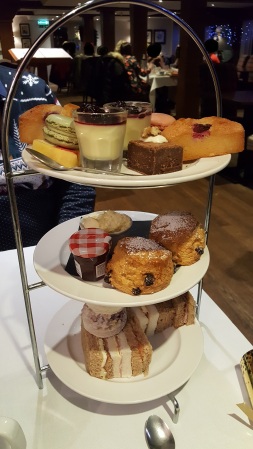 Also, whilst they were good sandwiches, they did not match the menu on the Christmas brochure. Although we did not realise this at the time. For instance, the brochure says the brie should be on rye bread whilst we were served one on white and one on standard brown bread. Also, the brie was meant to be accompanied by red onion marmalade whilst ours contained the same chutney as the ham sandwich. Our favourite was the turkey and cranberry sandwich.

On our first visit the scone was not very good. However, this time it was larger and was very tasty. The scone contained a reasonable amount of fruit and was a little spicy with a hint of a Christmassy cinnamon and nutmeg flavour. It had been warmed up and dusted with icing sugar.

This visit we were only given one mini pot of Bonne Maman strawberry jam between us. This was not really enough for the two medium scones but we managed. There was enough clotted cream for the two of us.

Again, the cakes did not match the advertised menu. However, we did not know at the time and it was not a problem for us. The macaroon was fairly sticky and the mini Battenberg was tasty. The finger of sponge was really very good. However, the small piece of brownie was outstanding and the lemon posset was absolutely delicious. I just would have liked to have had more of both of them! Everything was nice and fresh and well made. 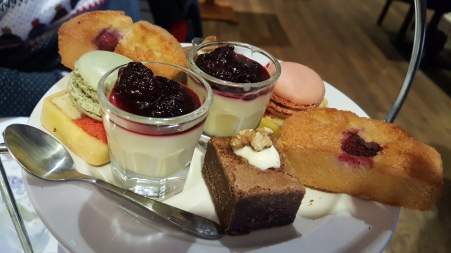 Service was also better than on our previous visit. Although there were no staff in the room most of the time, they did keep popping in to make sure everyone was ok.