Background – We had booked for 2017, which had been cancelled due to a large snowfall making the grounds inaccessible, so we were really hoping to get to Waddesden in 2018. We booked our places in July (who thinks about Christmas in July??!!)! Even that early, some of the tickets to see the Manor decorated for Christmas were sold out!!

This year we were lucky and there was no snow. However, it was a cold dull day with some rain.

Outside the Manor there was a large Christmas market with many stalls to buy from. Later, after dark, the grounds were lit up in an interesting light display,

with a route to follow to see the various displays.

The house inside was decorated to this years theme – carnival. Each room had magnificent, beautifully decorated trees and decorations to view.

After touring the house, we went to The Manor Restaurant for our Afternoon Tea,

Options available – Various options are available at the time of booking.  The website mentions vegetarian, vegan, gluten-free, dairy-free and nut-free.

Comments – We had booked our Afternoon Tea in July! A table was reserved for us in the Manor Restaurant. The restaurant was decorated for Christmas, as was the Manor itself. 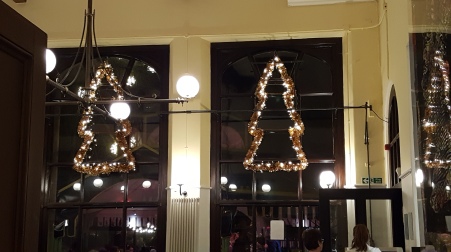 The table was laid with cutlery, paper napkins and a menu each.

There was a pretty light centrepiece on each table. 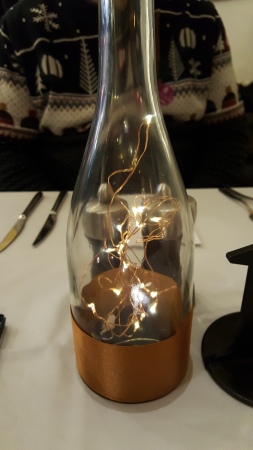 We were asked what type of tea we wanted and were told there would be a glass of prosecco brought shortly. Two of us chose our usual English Breakfast tea, one chose Oxford blend tea and one asked for a glass of milk instead.

The prosecco took sometime to arrive. When it did it was followed shortly by the other drinks.

The tea arrived in two round black metal teapots along with a jug of milk between us all.

The drinks were followed by the arrival of the first part of the Afternoon Tea. This was a white oblong plate each, containing the savoury part of our Tea. 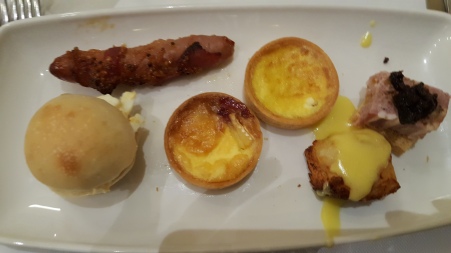 All of the savoury items were really good and very tasty. Our favourites were the tiny smoked haddock rarebit and the chipolata. The weakest item was the egg and salmon slider which seemed to be missing the smoked salmon!

When we finished the savoury, we were each brought a small three-tier cake stand with the scones and cakes on it.

The scones were quite small but were fresh. There was enough of both jam and cream. The jam was a mass catering jelly type jam.

Finally, we reached the cakes. All were good, fresh and tasty. The ones we liked best were the lemon meringue tartlet, the panna cotta and the sticky macaroon. The mince pie was a mini rectangular one with a crumble top which was also very good. 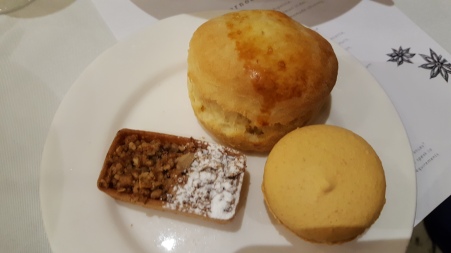 The opera cake was the least favourite on our table. 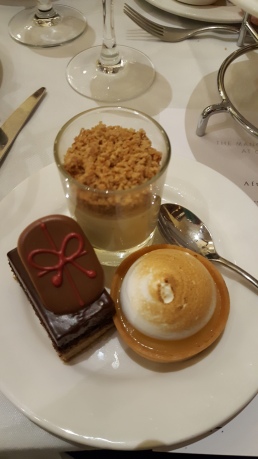 The tea was a little on the strong side for us and was a bit cold. We asked for a second pot of just the English breakfast, which was a bit hotter when it arrived.

The Restaurant was very busy as it was fully booked for the festive Afternoon Teas so service was a bit hit and miss. However, we managed to get everything we needed and the waiters were helpful.