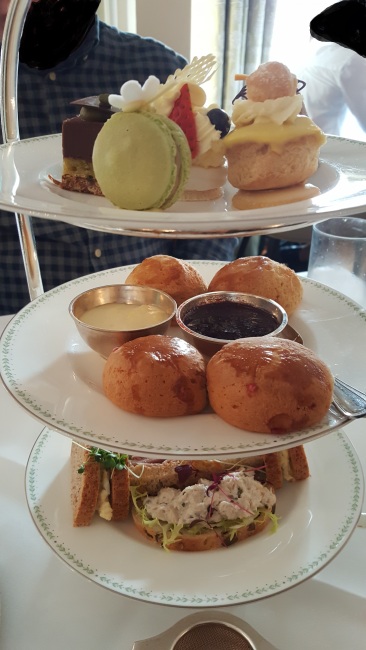 Parking and Access – There is limited on road parking outside the tearoom but it is metered and I am not sure how long you could park for. There are multi-storey car parks available that are not too far away. However, Harrogate is not flat and some walking would be required. Both the main tearoom and the Imperial Room have stairs to reach them. However, there is an area of the tearoom that can be reached on the flat. The toilets are also accessed via some stairs.

Background – I explained most of the background to our visit to Bettys in the previous review of Bettys traditional Afternoon Tea, so I won’t repeat it all here.

The Lady Betty Afternoon Tea is Bettys special Afternoon Tea. It is only available at their Harrogate and York branches and must be booked in advance. It takes place in a separate room to the main tearoom but is still served in the traditional Bettys fashion by attentive uniformed waiters and waitresses. 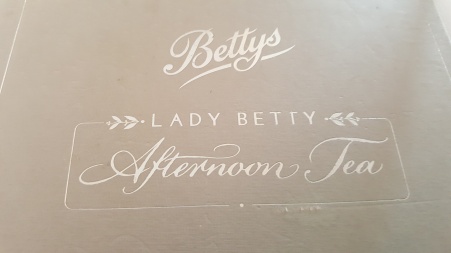 We had chosen to have our Tea in the main Harrogate branch of Bettys. It was held in the Imperial Room, which is upstairs from the main tearoom.

Contents – A pea, cucumber and tomato cocktail, a mini smoked salmon and cream cheese roulade and a small slice of pork and apple pie, a ham and tomato pate finger sandwich, a semi-circular egg mayonnaise sandwich and an open chicken and tarragon sandwich. A small rose petal scone and a small lemon scone, a pot of strawberry jam and a pot of clotted cream. Six cakes served between the two of us – a chocolate and passion fruit cube, a gooseberry macaroon, a chocolate and pistachio dacquoise slice, a berry meringue, a lemon religieuse and a slice of mini Battenberg cake. A pot of tea of your choice from the large menu.

Options Available – Vegetarian, Gluten Free and Children’s options are available. The Tea is also available with a glass of Champagne.

Comments – This Afternoon Tea must be pre-booked. We had booked our Lady Betty Afternoon Tea online via the Bettys website (www.bettys.co.uk).

On arrival, we were able to bypass the queues for the main tearoom and go straight upstairs to the Imperial Room. Our coats were taken and we were shown to our table.

The room is elegantly decorated 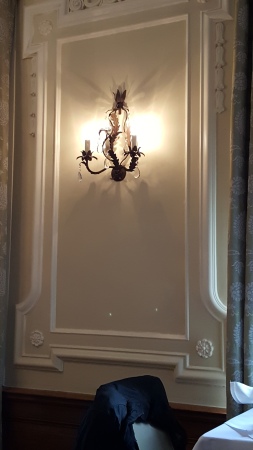 with a beautiful wooden parquet floor and comfortable leather chairs.

There was also a pianist playing whilst we ate.

Everyone in the room was having the Lady Betty Afternoon Tea and the room was full (I was able to take some photos as we left when the room had emptied).

The table was laid with a vase of white rosebuds,

cake forks and small knifes, a teacup and saucer in Bettys exclusive design, and a menu each.

After a short while we were served with a small glass containing the pea, cucumber and tomato cocktail. This was very pleasant and a refreshing start to the Tea.

The tea arrived soon after in individual, heavy stainless-steel teapots. They were accompanied by an extra pot of hot water, a small jug of milk and a tea strainer each.

We also received the cold drinks we had ordered as an extra (a homemade lemonade and a sparkling apple juice). We had chosen the Bettys Afternoon Tea blend from the tea menu. The tea was loose leaf and was of a perfect strength. Later on we asked for a refill of one of the teapots and were given a whole new set.

When we had finished our pea cocktail, we were served with the rest of the Afternoon Tea on a three -tiered stand with pretty round plate in the Bettys design of a tiny green leaf pattern around the edge of white plates. This was accompanied by a small plate each, containing the mini salmon roulade and the pork pie slice. 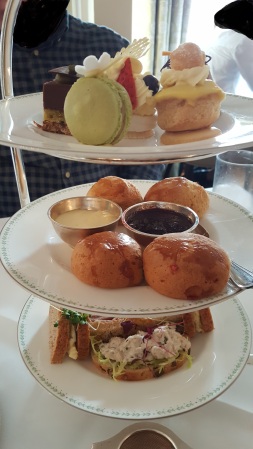 The salmon roulade was very tasty and sat on a lovely crisp layer of some sort. However, I wasn’t over impressed with the pork pie, which was too small and a little bland.

The sandwiches were all very good. They were on different types of breads and were well filled. My favourite was the chicken and tarragon open sandwich.

The two scones were both fairly small, with the rose scones being the smallest. The rose scone had barely any rose flavour (which I was glad about!), whilst the lemon scone was particularly delicious and had a lovely lemon tang. There was barely enough jam for the four scones. We asked for a second pot of clotted cream, which meant we had just about the right amount of cream.

As I have mentioned before, I find it particularly annoying when there is only one of each type of cake. So, it was devastating to find that Bettys, my most favourite tearooms ever were committing this particular sin! AARRGGHH!!! So, like nearly everyone else in the room (around twenty tables), we carefully cut each small item in half so that we could both have a taste of everything. Why do cafes do this? I would rather have fewer items and both have the same than have to cut each item in half. Ironically the Afternoon Tea available in the main tearoom (reviewed before this Tea) gives each person the same three cakes. So much more sensible!

The cakes were all really good. They were fresh, tasty and interesting. The gooseberry macaroon actually tasted of gooseberries, the Battenberg was well made and the meringue was light. The lemon religieuse was a small choux pastry filled with a delicious lemony cream and was very good. However, the two chocolate items were definitely my favourites. The chocolate and passionfruit cube was a firm but light mousse filled with a passionfruit centre. Finally, the chocolate and pistachio was light and tasty with a sticky crispy layer in it. Delicious!!

Finally, the service was a good as it always is a Bettys. Attentive but not intrusive. A lovely and special experience.