Parking and Access – There is a reasonable amount of parking in the village of Woburn, some of which is quite close to the Coffee House. There is also a reasonably large public car park behind the Woburn Hotel, accessed from the road leading through the park. There are some cobbles to get over on the pavement area. The Woburn Coffee House has steps to access the toilets, lounge area and the conservatory.

Background – At last, we have completed the set! The winter Afternoon Tea is the final season from the Woburn Coffee House that we tried and is available from January to March. We will definitely be going back!

Contents – Horseradish macaroon topped with salmon mousse and smoked salmon, a chicken, tarragon and ham hock terrine, a quinoa and Roquefort salad, a smoked swiss cheese and rosemary cheesecake with a cashew tuille, and a ginger choux bun with chicken liver parfait. A medium sized apricot and almond scone with a pot of strawberry jam and a pot of clotted cream. A winter beet and walnut cake, a baked custard tartlet with almond croquant, a piece of cherry and pistachio nougat and a blackcurrant and crème de cassis mousse with poached apples and a gingerbread biscuit. A pot of tea of your choice.

Comments – We booked our Tea in advance as usual as the Woburn Coffee House gets booked up quickly.

We were seated in the conservatory area at the back of the building.

We were then each given a menu to choose our drinks from. We chose English Breakfast tea for three of us plus a glass of milk for the fourth person. We also ordered a jug of homemade lemonade.

The table was beautifully laid in the usual manner, with matching tablecloth and napkins and pretty matching china.

The lemonade arrived quickly in a glass jug. It was sparkling, cool and was delicious. We ordered a second jug later.

The tea arrived at the same time in two large china teapots, as did the glass of milk. 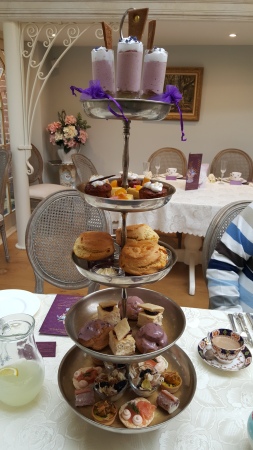 All of the items in our Tea were freshly made, and were really delicious. 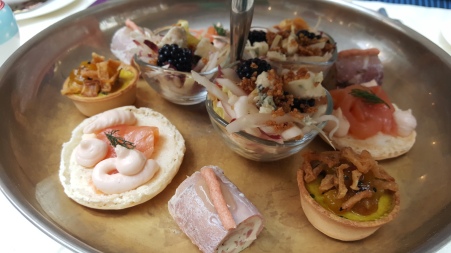 As usual there were some interesting and unusual items the chefs come up with for their Teas using seasonal produce.

Sometimes there are items on the menu that we are wary about which contain ingredients we don’t usually like. However, they usually turn out to be really tasty. A brilliant example of this was the very first item we tried – the horseradish macaroon. Many of you will know that I do not like horseradish and am not bothered by macaroons, which I usually consider to be a boring filler for the sweet course. However, this was an incredibly delicious item. The macaroon was big, sticky and tasty and totally complimented the salmon mousse and smoked salmon on top. We voted it our favourite item on the whole Tea!! 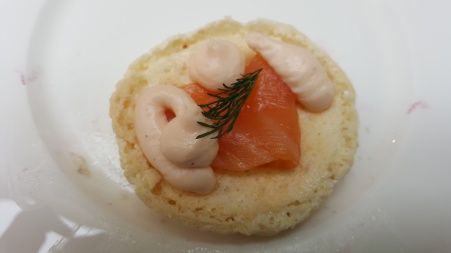 One item that divided opinion was the choux bun filled with chicken liver parfait. I really liked this but two of our party did not, with one refusing to eat theirs. Of course, I was able to help out by eating the extra one!!

Our least favourite of the savoury items was the smoked swiss cheese and rosemary cheesecake. This was a baked cheesecake which was not a popular texture with us and we felt it didn’t have a lot of flavour.

As on previous visits, we were each offered a cheese and chive scone with butter and kiwi and pepper jam. We all love these savoury scones and would have quite happily have eaten more if we could!!

The apricot and almond scones were fresh, warm and very tasty. There was enough homemade strawberry jam but there was not enough clotted cream for the size of scone. We asked for, and received, some butter for our non-cream eater. 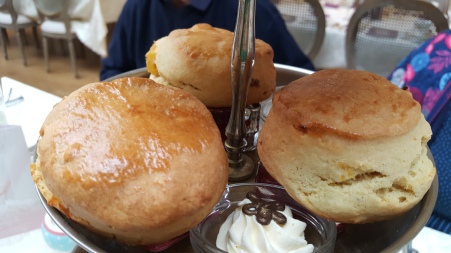 Of the sweet items, the baked custard tart was probably my least favourite, simply because I am not that keen on custard. 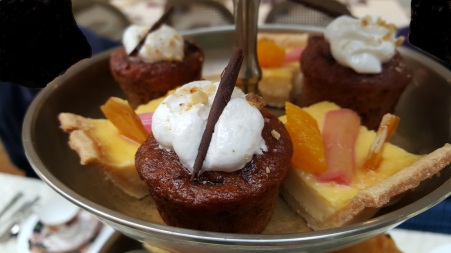 My favourite was the blackcurrant mousse, followed by the piece of nougat.

The tea was of a perfect strength and was refilled on request. It was made with teabags.

Service was as pleasant and helpful as always.