Background – This Afternoon Tea is a bit different from recent teas I have reviewed, as it is delivered by a local company to your door. It is only available within the local area. Addresses within ten miles of the company are delivered for free, with addresses outside this, but within the delivery area, attracting a delivery charge based on the distance travelled.

This Tea contained all the usual items, including sandwiches, so I have scored it more like the ‘normal’ café type Tea. It even included the knife and fork!

Contents – Three large rectangular sandwiches each (salami, ham and tomato and brie and tomato). One small/ medium plain scone, a plastic pot containing an amount of strawberry jam and an amount of clotted cream. A red velvet small cake, a macaroon, three small squares of chocolate brownie, a Ferrero Rocher chocolate and some slices of strawberry and apple. A small plastic pot containing four tea bags. Wooden knife and fork wrapped in a brown paper napkin.

Options available – There were no options to add to this hamper.

Comments – This Afternoon Tea is made and delivered fresh on the date requested. We received ours in the early afternoon of the requested date.

It arrived in a neat box with a window top showing the Afternoon Tea inside. The inside slid out like a tray. 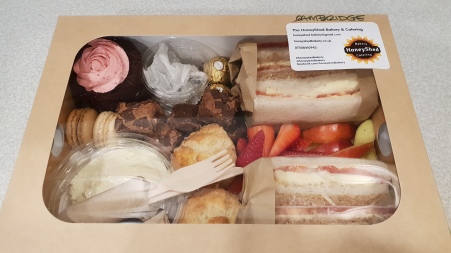 We served this Afternoon Tea inside as, sadly, it was not a nice day.

This time we chose plain white plates with a blue line around the edge.

The teapot had a picture of a cat on it. The milk jug matched the plates. 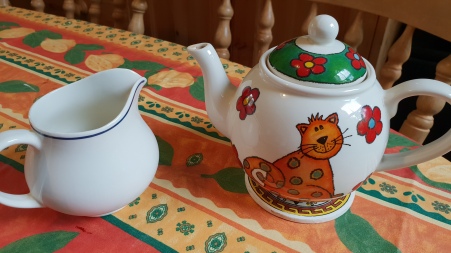 We used the tea bags provided in the Tea package. It was of a good strength and flavour.

We served the Afternoon Tea on the usual two-tiered cake stand with flower-patterned plates. The cakes were served on a pretty flowered plate with a scalloped edge. 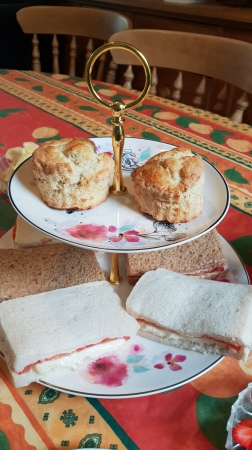 The sandwiches were large. Each was a half slice of bread, with the crusts cut off. We were not told what the fillings would be, just if there was anything we did not like. Unfortunately, we did not think to add salami to our list of dislikes as we have only rarely been served it. My companion did not like it at all, unfortunately. I managed to eat it, but it is definitely not my favourite filling. The ham and tomato sandwich was made with rather thin ham. The brie and tomato sandwich was well filled. 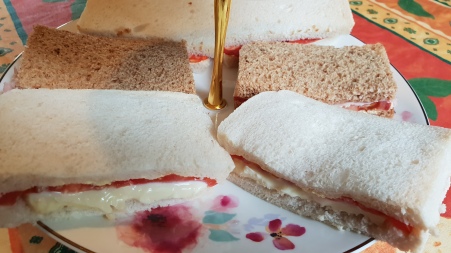 The sandwiches were all fresh and had arrived carefully wrapped. They were made with mixed white and brown bread.

Today’s scones were rather on the small side and were plain. We warmed them up in the oven before eating. The scones were not the lightest we have had but were reasonably fresh tasting.

The jam and clotted cream were provided together in a plastic tub. The jam was strawberry and was not too runny. There was enough of both jam and cream as the scones were not large and there was only one each.

The cake section was interesting, with two items being bought in – the macaroon and the chocolate, with the cake and the brownie made by the bakery. The cake was a reasonable size – about cupcake size, and was beautifully topped with a rose of icing. 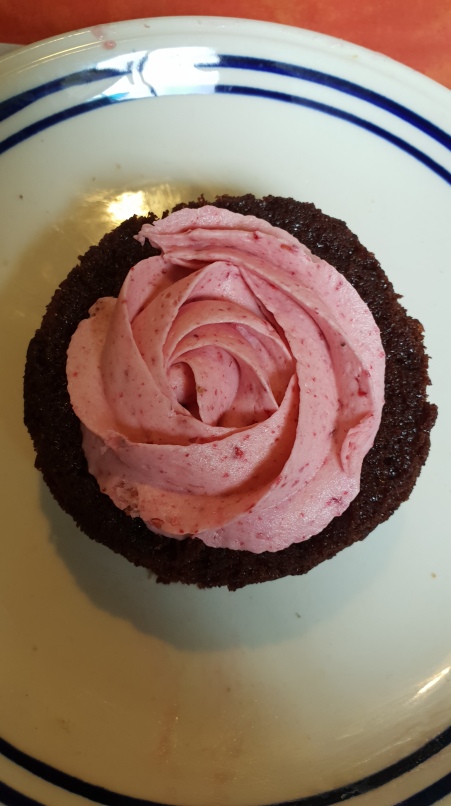 The chocolate brownie was absolutely delicious. The squares were about an inch square, which was not big, but there were three squares each. I could have happily eaten many more squares. 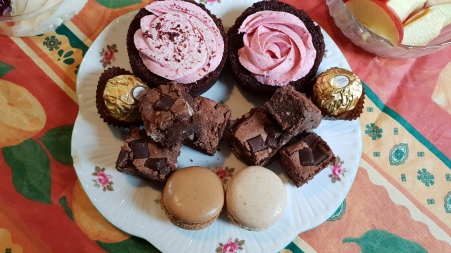 A nice touch with this Tea was the inclusion of some sliced apple and quartered strawberries. These were fresh and very tasty.

I have based my presentation score on the way the Afternoon Tea was presented on arrival. This Tea was particularly well presented and looked very attractive.

Finally, I have based my service score on the service we received from the company.

To be honest, I wanted this Afternoon Tea to score better. I was pleased to support a relatively local company, which had made the effort to arrange deliveries of their Teas. I think the idea of sending out a Tea like this is really good and I wish more companies would do it. We all need cake at this time!! The lady we spoke to on the phone was really helpful. The company is clearly very busy, which is good to hear. However, there were a few small disappointments with this tea which let it down. Hopefully, this was just an off day.