Parking and Access – This time we were inside the venue as the weather was not so good. There is one small step up to enter the dining area. The toilets are up a flight of stairs with no alternative access. There is on-street parking available in front of the venue.

Background – Another of my ‘Afternoon Teas by post’ reviews.

As before, I am scoring them slightly different to ‘normal’ Afternoon Teas – see the end of this review.

We are way up north with this Afternoon Tea coming from Glasgow. We chose the Ginger Spice Tea Tray from the various options mentioned on the website.

Contents – Four sandwiches (two each of egg mayonnaise and cheese with homemade orange and lemon chutney). The sandwiches were not included in the Tea. Three medium/small fruit scones between the two of us, a small jar of strawberry jam and a small jar of raspberry jam, plus two mini jars of clotted cream. A ginger fruit cake and six assorted chocolates. A box of ten Afternoon tea teabags and a box of ten English Breakfast tea teabags and a small packet of fresh ground coffee.

Options available – The clotted cream was added as an option to this Tea (£2.50 for two mini jars).

Comments – As usual, we were able to specify a date to receive our Afternoon Tea delivery. It arrived on the date specified in a large cardboard box.

Inside the box was a shallow wicker basket wrapped in plastic, with a large bow on it. The clotted cream jars were just sitting within the basket with the other items. We had to open the plastic to remove the jars of cream so they could be placed in the fridge. There was no instruction to do this. 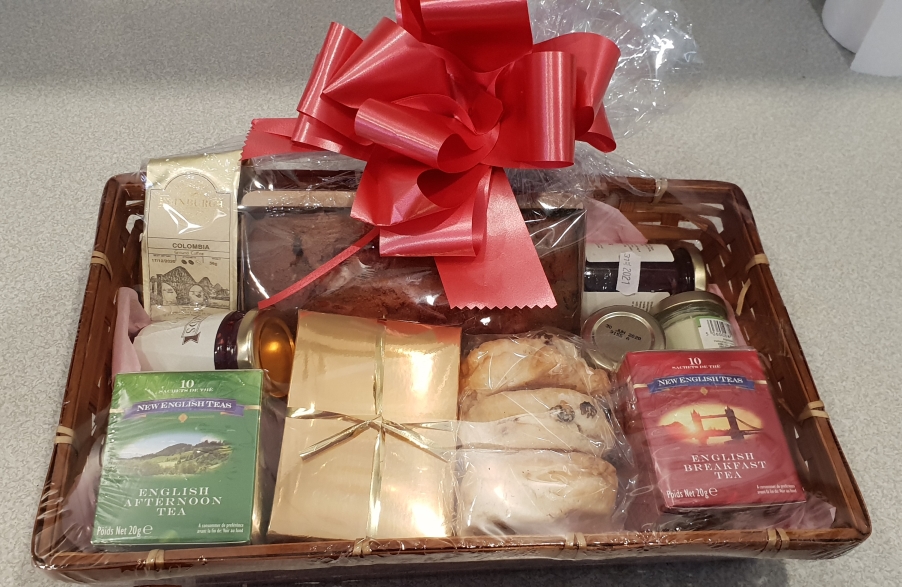 The Ginger Spice Tea Tray was meant to include a wooden tray. Once again, this had been replaced by a wicker basket. Good job I have two cats!! (See the review of Regency Hampers Afternoon Tea and Scones Set).

We had our Tea at the dining table. We went with Wallace and Grommit themed plates,

animal mugs and a teapot with a cat picture on it. A total mismatch!

There were two different boxes of teabags supplied with the Tea. We chose to try the Afternoon Tea teabags. The tea seemed a little on the weak side to us.

We didn’t try the coffee.

We served the sandwiches and scones on the usual two-tier cake stand with pretty flower-patterned plates. Ok, it’s the only tiered cake stand we own! So it might be seen quite a lot! Perhaps there is an opportunity for a little online shopping there…… The cake was served on a third Wallace and Grommit plate.

The sandwiches are not included in the delivered Tea. This time we were using a delicious roasted seeds loaf from our favourite bread shop. We filled the sandwiches with cheddar cheese topped with home-made orange and lemon chutney, and egg mayonnaise. I was a bit worried about the orange and lemon chutney. I made it last year and hadn’t got around to trying it yet. It sounded a bit odd. As it happened, it was delicious – phew! We have several jars of it to eat!! It was lovely to have egg mayonnaise sandwiches, they are always a favourite. It has been hard to find eggs, but they seem to be back in the shops now, thank goodness!

We had a slight problem with the scones. The website listed the items to be found in the Tea. This list mentioned three Devon scones and three fruit scones. We had assumed that meant there would be three plain and three fruit included. However, there were only three fruit scones in the parcel. I have sent a query to Bradfords bakery to clarify the situation, but have not yet received a reply.

The three scones we received were of a medium/small size. When unpacked from their packet,

they seem to lose some of the outer layer of the scones. They were not, unfortunately, quite as good as other scones we have had delivered. It also seemed very odd to send three scones with an Afternoon Tea for two people.

On the other hand, the jam was delicious. It was refreshing to have two different jams to choose from, and both were really good. However, the raspberry has to get a mention for being particularly good. There was plenty of jam for the scones, with a lot left over. 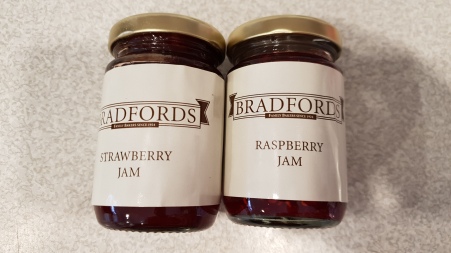 The mini jars of clotted cream were quite cute but were not the easiest things to get the cream out of. There was just about enough clotted cream.

The ginger fruit cake was not very deep, which made it very hard to slice. 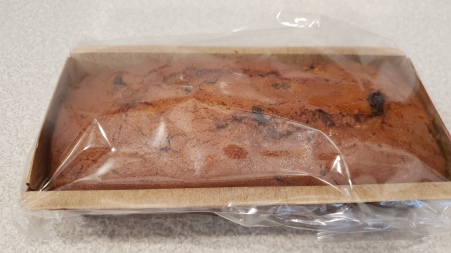 However, it was very tasty, and the ginger could be detected. 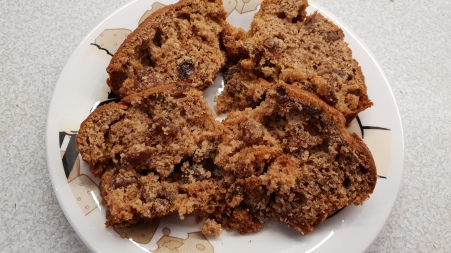 The chocolates had assorted fillings, including caramel and coffee cream. They were rather yummy and didn’t last long!

As I mentioned above, I am scoring these postal Afternoon Teas in a slightly different way. I have based my presentation score on the way the package was presented and the state it was in when it arrived.

I have decided to give the sandwiches a full score of two. Not because they were perfect by any means (!) but as I feel this is the best way to keep the score for the rest of the Tea in line with the scores for ‘normal’ Teas with everything included.

Finally, I have based my service score on the service we received from the on-line company. The query over the scones has affected the score here. However, the website was reasonably easy to order from.

Update – When I wrote this review, I had emailed Bradfords about the scones, but had not received a reply. A few days later I received a reply telling me that there should have been both plain and fruit scones included in the hamper. They said there had been a mistake in the packing instructions. I was told I would be sent out a set of plain scones, plus a new jam. They are also sending out a wooden tray. I am very pleased with this result and hope that it means other people receive the product they expected to. I have not yet received the additional items, but hope to in the next few days.