Parking and Access – There appeared to be some on road parking right by the Euromast. However, we arrived by water taxi, which dropped us off just a short walk from the base of the Euromast. There are steps up to the entrance, but the website states that it is possible to reach the restaurant and the observation deck with a wheel chair.

The toilets for the restaurant were down a flight of stairs. I did not spot an alternative, but there may well be one available.

Background – We were on a short cruise which included a stop at the port of Rotterdam. A quick google showed me that the Dutch enjoy their Afternoon Tea, which they sometimes call High Tea. Many options were available. However, my attention was drawn to the Euromast, which was serving a High Tea in it’s brasserie high above Rotterdam. I had to book! 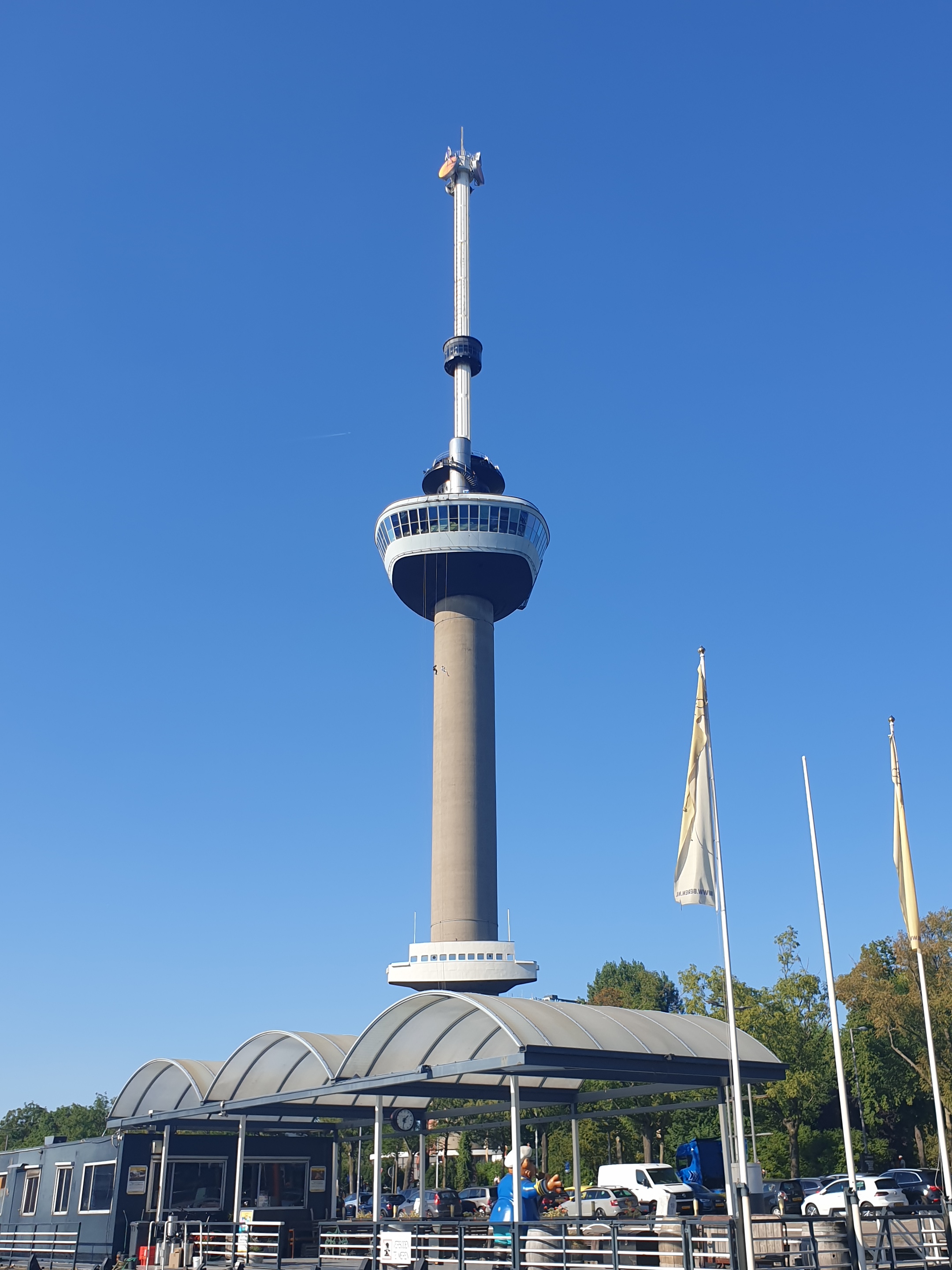 Options Available – There is also a High Wine Tea available.

Contents (per person) – A cheese sandwich, a tuna wrap, a chicken roll, a piece of vegetable quiche, a feta and nuts filo pastry and a small cup of sweet pepper soup. One medium sized fruit scone. Some strawberry jam and some mascarpone cream. A triangle of chocolate brownie, a small fruit sponge, a finger of butter sponge, a lemon macaroon and a micro custard tartlette. A pot of tea from a choice of mainly fruity teas.

Comments – When you book your High Tea at the Euromast, you also need to book an entrance ticket (price 11.50 Euros). This also gives you access to the lookout platform.

We went straight up to the brasserie for our Tea. We would visit the lookout area afterwards. Access is via a fast lift up the centre of the tower. The brasserie is on the floor below the lookout platform.

We were shown to reserved table next to the window. There were fabulous views across the city of Rotterdam. Immediately below us there was a large green park area. Beyond that, we could see the various parts of the river, including the ship we had arrived on, and the many high rise building that make up the centre of Rotterdam.

The table was laid with chunky white china plates and tea cups and saucers, plus a knife and fork and a paper napkin.

There was also a card in a holder which gave the options for tea flavours both in Dutch and in English. 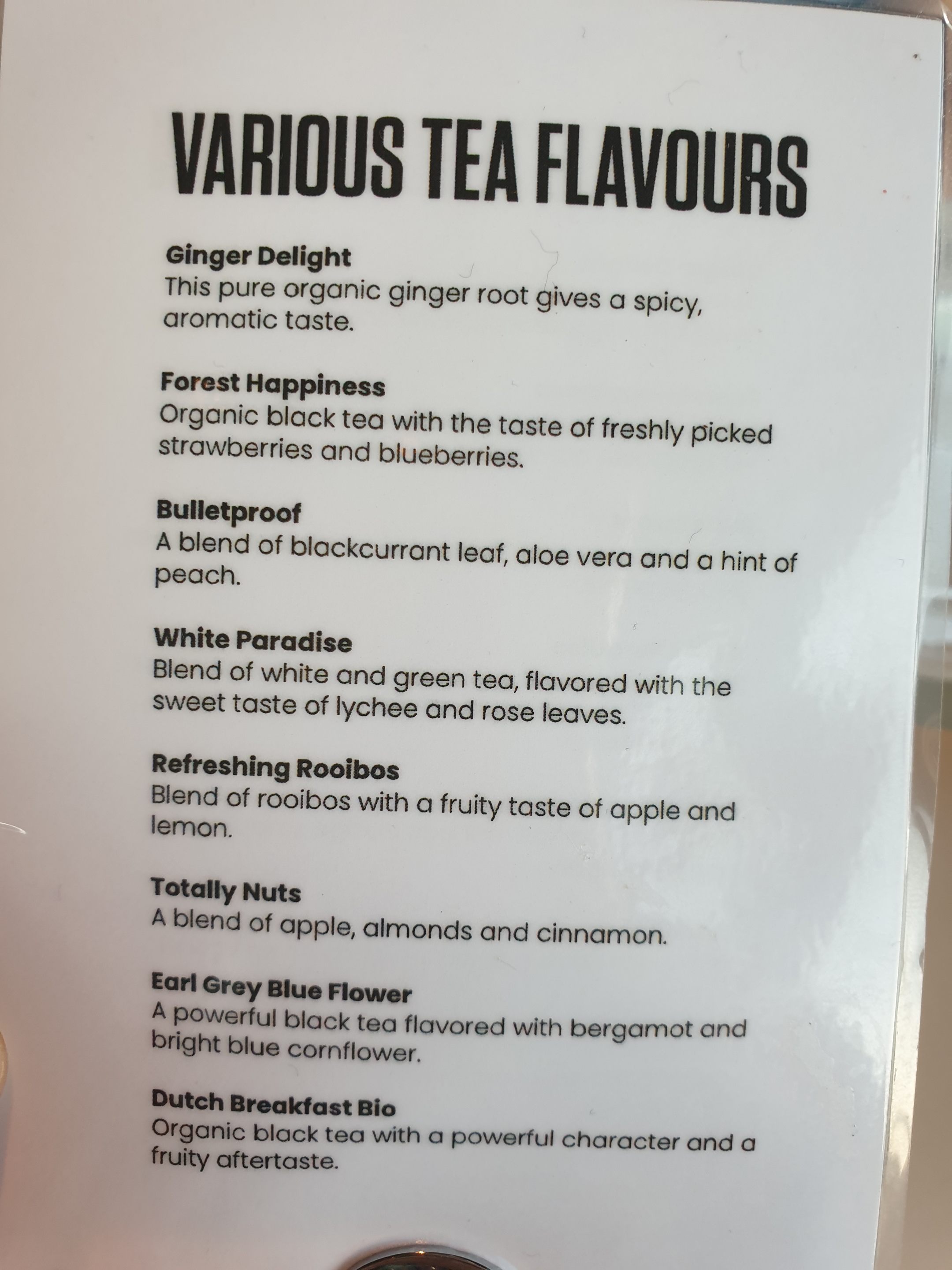 We were asked which tea we would like to drink. We both chose Dutch Breakfast Bio Tea. We were then given a large jug of hot water

and a large open ended tea bag each, containing our tea of choice! We were not given any milk as the teas were usually drunk black.

The tea was interesting, but I don’t think I would choose it again. I asked for a cola as well, at additional cost.

We were then brought a three-tier cake stand,

plus a rectangular plate containing the remaining savoury items.

The savoury items were varied and interesting. We started with a hot cup of tasty soup. The two pastry items were also warmed. I particularly enjoyed the filo pastry with feta cheese in it.

There were also three different bread items. A wrap, a roll and a sandwich. All were fresh and interesting.

The scones had been warmed up ready for us. They were accompanied by a glass containing strawberry jam and a glass containing mascarpone. There was enough of each for the scone. It was different to try the mascarpone instead of the more usual clotted cream, which is very much a British thing.

There was a good variety of cakes. All were tasty and fresh. My favourites were the butter cake and the brownie. 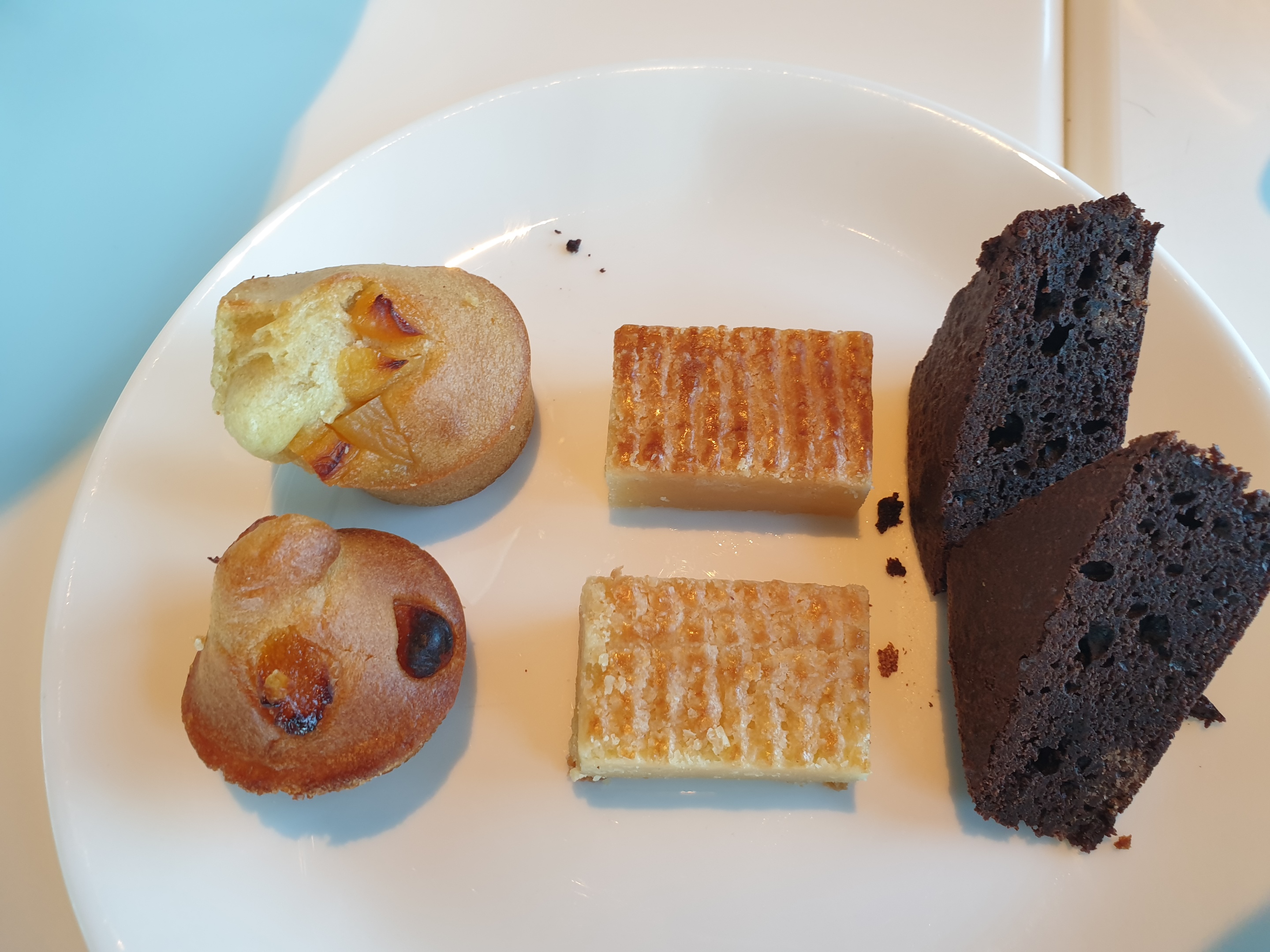 Service was good and was very friendly. Everyone we spoke to spoke in perfect English to us. We were offered more tea and could chose a different variety to try.

There was also the added, slightly bizarre attraction of seeing several people abseiling down the outside of the restaurant and the tower!!! 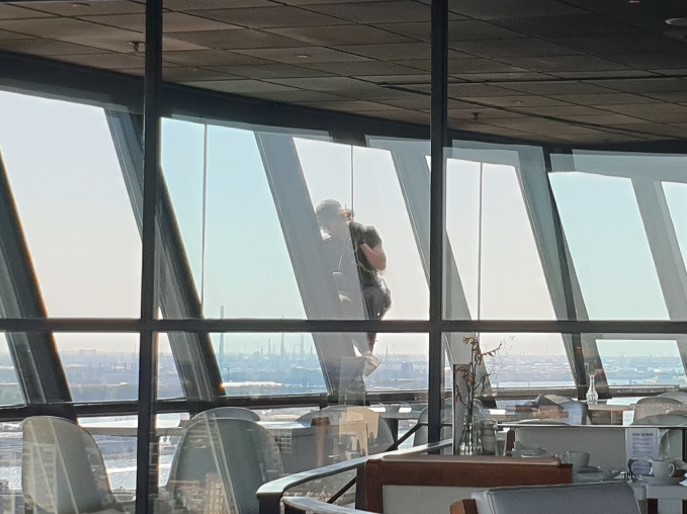 Following our Tea, we first visited the lookout platform above the restaurant. Then we went up some further steps and had a ride on the Scoop – a revolving ring that travels to the very top of the Euromast. This was available for an additional 4 euros, and was well worth the extra cost.